Why did my wife decide that buying $700 worth of wine was a canny financial move? Because humans aren't as rational as orthodox economists (and the GOP) think they are. 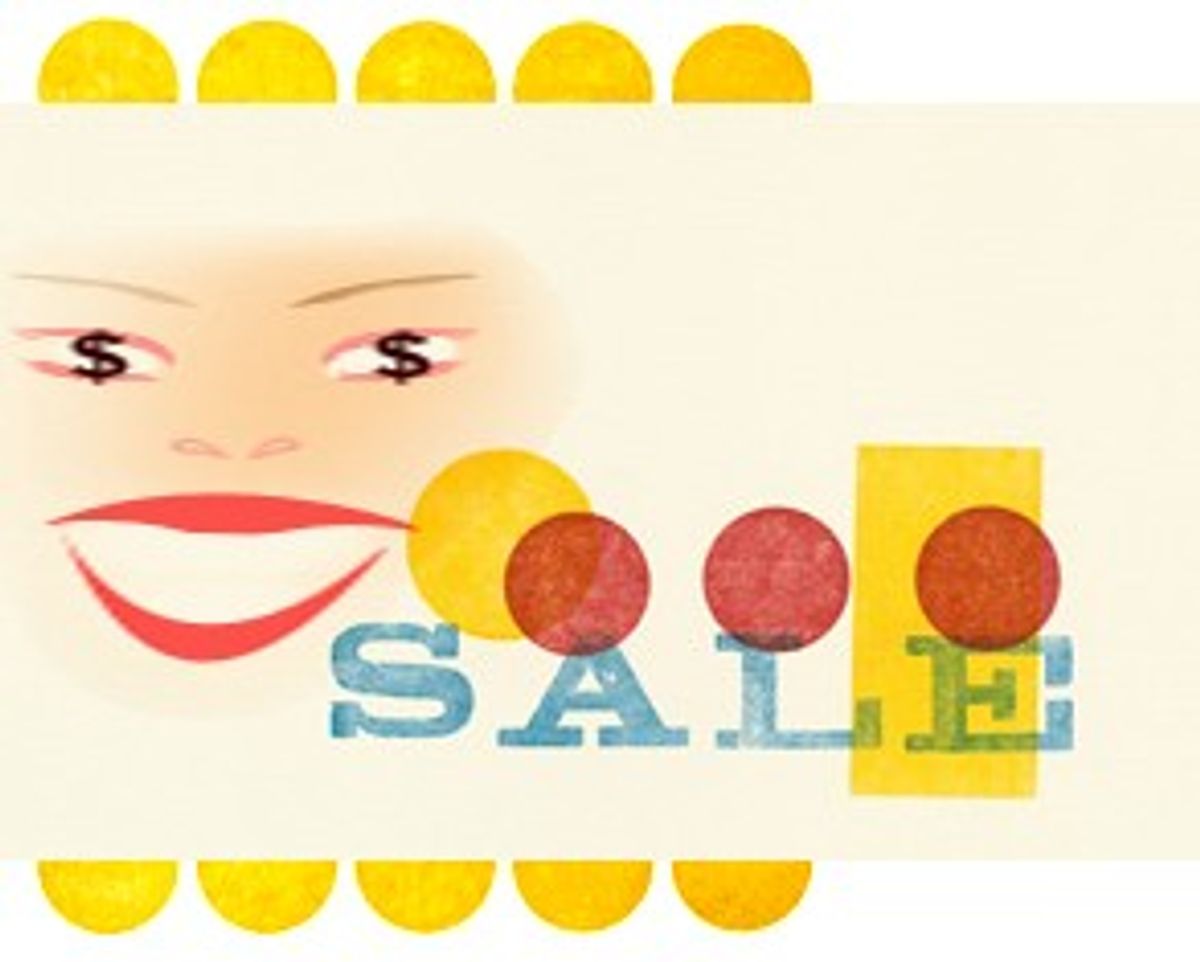 My wife recently made a totally out-of-character purchase. She came home from shopping one day and asked me to help her unload three cases of French and Italian wine she had picked up in Berkeley, Calif.'s, famed Gourmet Ghetto. There had been, you see, an unprecedented 50 percent off moving sale on three or more cases of wine at North Berkeley Wine, one of the many grand cru wine boutiques that litter this part of the world.

"Think of all the money we saved," she said, $700 later. This is an investment my wife could justify with all sorts of logic about building a cellar, expanding our knowledge of Burgundy and Tuscany, and experiencing some pure, unadulterated drinking pleasure. It didn't help that, as Valentine's Day approached, she was reading "Love by the Glass: Tasting Notes From a Marriage" by Wall Street Journal wine columnists Dorothy Gaiter and John Brecher.

Let's just say my reaction was muted. It's not exactly a good time around our household to be spending that kind of money. Fiscal conservatism is the order of the day. This is a time of austerity, layoffs, lost bonuses, financial scandals.

The recession may be over, as Federal Reserve chairman Alan Greenspan recently declared, but you wouldn't know it around our house. Cost-cutting measures have been in place for some time now, and they'll remain throughout the slow recovery ahead. We're cooking at home every night, although I'm not sure how much money we're actually saving. (Our tastes in food haven't changed, only the location in which we enjoy them. We are still, as author David Brooks so aptly calls us, bourgeois bohemians.)

But sound rationalizations and good taste aside, we were both at a bit of a loss as to what led my wife to make such a purchase at exactly the wrong time. We mentioned this purchase to some close friends, to whom we hastily tried to sell some of the wine, and they recounted stories of similar decadence at exactly the wrong moment -- especially at the wrong moment -- as if an empty bank account had the uncanny ability to make cash registers ring.

Orthodox economics says that we're supremely rational beings -- self-interested agents in a perfectly efficient market. We buy and sell because it's in our interest to buy and sell. "It is not from the benevolence of the butcher, the brewer, or the baker that we expect our dinner, but from their regard for their self-interest," wrote Adam Smith in "The Wealth of Nations" in 1776.

Back in the real world, however, a different kind of logic prevails. We buy things we shouldn't, we spend money we don't have, we get caught up in sales. "Real humans, even when they know what is best, sometimes fail to choose [what is best] for self-control reasons," wrote noted behavioral economists Sendhil Mullainathan and Richard Thaler in a 2000 National Bureau of Economic Research report.

These days, behavioral economics is a hot field in the otherwise dismal science. The behaviorists combine psychology with economics to unravel the human factors at play in otherwise rational and efficient market forces. In the hands of the behaviorists, the question of why we buy is translated into the more compelling query: Why do we buy the things we shouldn't?

The behaviorists study why we so often regret the long-term implications of our less-than-rational short-term decisions. People put off retirement investing for the instant gratification of chocolate mousse. They say they want to save more, but when the money comes along from a tax refund, they buy a new car instead.

Harvard economist David Laibson even has a fancy name -- "hyperbolic discounting" -- for this tendency in ordinary consumers. "Delay of gratification is a nice long-term goal, but instant gratification is disconcertingly tempting," Laibson and three other economists wrote in the August 2001 issue of the Journal of Economic Perspectives.

A middle ground between the separate planets of cold logic and irrational exuberance lies in a soon-to-be-published paper by economists George Loewenstein of Carnegie Mellon University and Dan Ariely and Drazen Prelec of the Massachusetts Institute of Technology's Sloan School of Management.

Loewenstein and associates conducted an experiment in which they offered first-year business-school students at Sloan the opportunity to buy a range of luxury goods, including an "average" and a "rare" bottle of French wine, without referring to the actual price of the goods.

The catch was that subjects had to first state whether they would buy the bottles of wine at a price determined arbitrarily by the last two digits of their Social Security numbers (that is, 34 becomes $34). The students were then asked the maximum price they would pay for the bottles.

The Social Security number game is a trick called "anchoring manipulation" that's borrowed from experimental psychology, and for some reason it makes otherwise rational people do irrational things. For no logical reason, students with Social Security digits higher than 50 said they would pay nearly twice as much as those with digits less than 50, even when reminded that this pricing system was completely arbitrary.

When presented with what was described as a higher-rated, "rare" bottle of wine, however, they still valued it much higher than the average bottle. Loewenstein and company called this combination of sensible relative prices built up from arbitrary valuations "coherent arbitrariness."

This is a long way of saying that people don't price things according to some inherent value set down by natural law, but instead on that object's relative value. Unless they've done their research before walking into a store, most people don't really know a product's exact worth. But they do respond quickly -- "robustly," writes Loewenstein -- if it's brought to their attention that they're getting an awfully good deal.

My wife may have known that these wines were ridiculously cheap, but she admitted later that she didn't really know how much they were inherently worth. And even though she went in expecting to save only 30 percent on a single case of wine, she found herself caught up in a frenzy to save 20 percent more by buying an additional two cases. Such is the uncommonly strong power of a good sale. At least we can live with the comfort that our irrationally free-spending lives are logical in the eyes of economic behaviorists.

But there is a bigger picture to my story of impulsive behavior. Consumer spending drives two-thirds of the U.S. economy. That's a whole lot of irrational decisions driving the fate of the stock market, the retail economy and the future of our jobs. And retailers and marketers are ruthless about exploiting this illogic through pricing tricks that drive people to buy. It's just that we aren't savvy about what they're doing psychologically. And the behaviorists have shown that even when we're shown how the tricks work, we continue to fall for them again and again.

We are not the completely rational beings that traditional economics tells us we are. Believing that we -- the economy at large, and the stock market in particular -- are supremely rational puts too much faith in our abilities to make the right choices. For example, some behaviorists argue that important economic decisions like 401K investing should become automatic deductions by default for new employees rather than opt-in decisions, precisely because people logically and all too predictably procrastinate or fail to sign up for the programs, even when it's in their own long-term self-interest.

Imagine a not-so-distant future of a nation of procrastinators turned into penniless retirees under Bush's plan to privatize Social Security and leave pensions to the whims of stock-market investing. And now thanks to Enron, there's the added lesson that even if you do manage to sock money away in your company's 401K account, your good deeds can still be trumped by your top executives' desire for instant gratification -- aka greed.

But in truth, the long-term future is an awfully abstract concept, and buying wine is a tangible short-term vote for living life in the present. It's a balm for our fragile recessionary sanity that the behaviorists have come along to say that we aren't supremely rational beings, and we shouldn't expect ourselves to be. Because after all, "In the long run we are all dead," wrote economist John Maynard Keynes.

I'll drink to that.

Mickey Butts is a freelance writer and editor in San Francisco. He was formerly a founder and executive editor of The Industry Standard.