A brilliant biologist's embarrassing new memoir reveals that even with a Nobel prize-worthy discovery under his belt, a 24-year-old geek finds it hard to get laid. 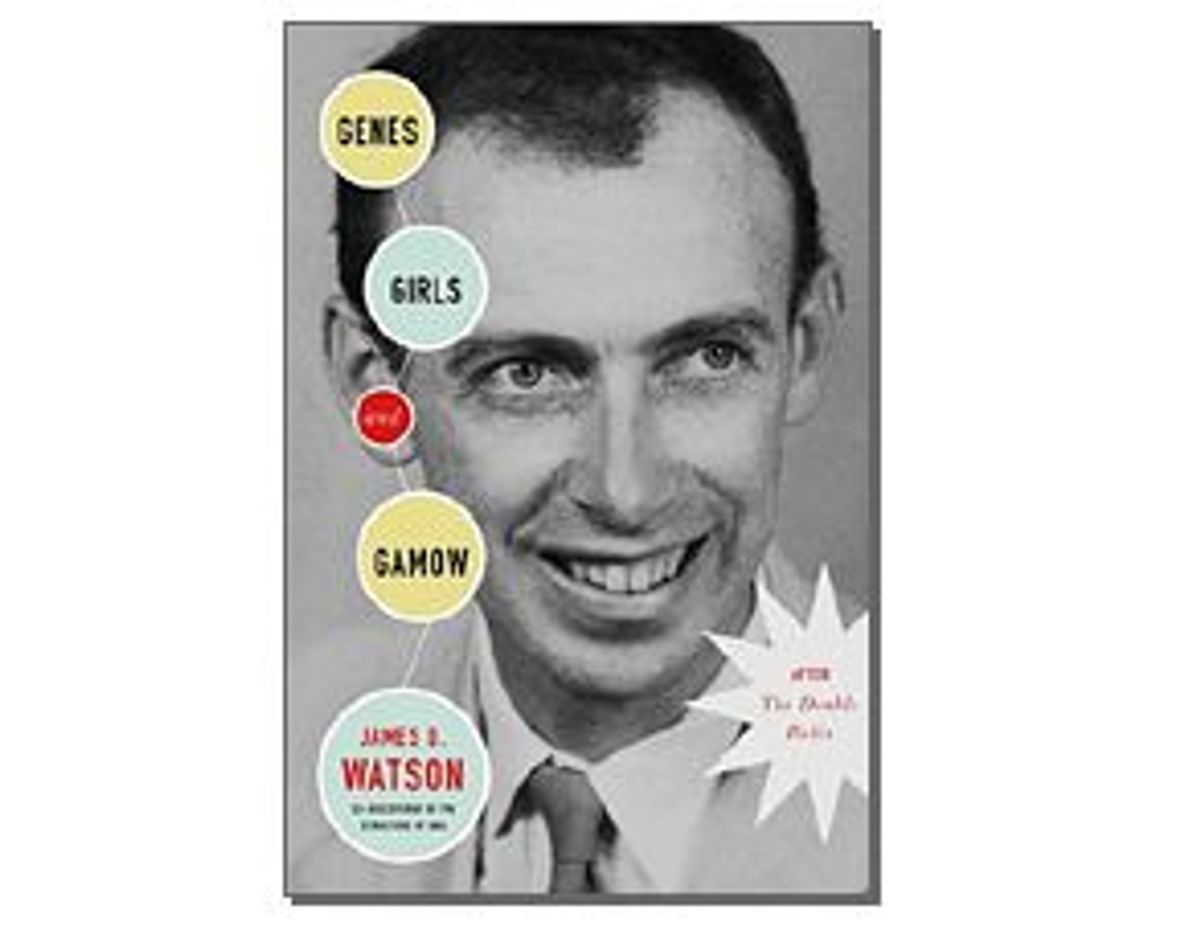 There are some memoirs that real friends would stop you from writing. They would take you aside and say, Jim, when you and I look back we find this all very amusing, but do you really want to bare it to the world? All the rebukes from uninterested women, your sexual frustration, the silly little practical jokes? Surely you've grown up some since then. And do you really think the world would be interested?

I can't speak for the whole of the world, but my guess is no.

James Watson's new book, "Genes, Girls and Gamow: After the Double Helix," is, as the title forebodes, about nothing much of anything. Dredged up from old letters, it is a diary-like recounting of the mundane details of his life from April 1953 to March 1968, including detailed descriptions of trinkets he buys his parents in airports and what kinds of houses his friends live in.

This story begins immediately after one of the most important scientific discoveries of the century -- for which Watson was to share the Nobel prize -- the discovery of the structure of DNA. Watson wrote a bestseller, "The Double Helix," about that pursuit way back in 1968. And now he wants us all to have the chance to know what life was like for a young American scientist following such a major accomplishment at the tender age of 24.

The big surprise is how much time he spends thinking about how to get laid (or groped, or whatever the '50s equivalent was). Well, that's interesting: Even a groundbreaking scientific discovery can't get sex off a young geek's mind. Nor apparently does it help him attract women -- or rather, "girls."

Reader, you may think that, when in the first chapter Watson obsesses about one Sheila Griffiths, "a good-looking English girl," he's introducing you to someone who's going to play some kind of role in this story. But no, you're going to hear about every female he takes even the slightest fancy to: women he meets on an Atlantic crossing, secretaries he ogles in diners, women he considers asking out but doesn't.

Sheila lasts but a few pages. Then it's Christa Mayr, the 17-year-old daughter of a Harvard ornithologist. Well, OK, he can't really keep his eyes off her younger sister, Susie, either, but the crush he had on that one back when she was 13 is at least subsiding. There's Rachel and Margot and Mariette and Linda (who had a "glamorous blonde personality"). Sadly, throughout much of the book, most of the women he covets go out of their way to avoid him. Some of his only successes involve bribery: "Both Leslie Orgel and Jane Rich opted at the last minute to join me, tempted by my offer to pay for the gas that would transport them."

Even academic institutions are viewed in light of their female pickings. Caltech is "girlless." And Watson desperately wants a job at Harvard: "A faculty position there could give me not only a chemical colleague focused on DNA but also the opportunity to be near Christa and, if not her, the many girls whose faces caught my eye as I walked about Harvard Yard."

All of this could be discounted as the harmless banter of a horny youth if it weren't for Watson's now notorious disregard for chrystallographer Rosalind Franklin, whose work contributed in a major way to the discovery of the double helix. In his earlier book, Watson's chauvinism and disdain are clear: "Though her features were strong, she was not unattractive and might have been quite stunning had she taken even a mild interest in clothes. This she did not. There was never lipstick to contrast with her straight black hair, while at the age of thirty-one her dresses showed all the imagination of English blue-stocking adolescents ... There was no denying she had a good brain. If she could only keep her emotions under control."

Watson says in his preface that he's trying to capture the spirit of his youth and to avoid being reflective. He succeeds. This is very raw stuff: daily life trivia, snapshots of his friends and letters to and fro. But it strikes me that this material belongs in a dusty old box in an archive somewhere, not in a book. It needs to be digested at some point, probably by an arm's-length historian, and, frankly, much of it needs to be left out entirely.

It's not that Watson can't write; he puts his words together nicely enough. But he doesn't seem to be able to tell a story. And without a narrative, reading it feels very much like being trapped in an old folks' home with Uncle James and his box of mementos as he hoots about his randy boyhood.

The science bits are a bit disappointing too, as Watson makes little attempt to make them understandable to the layperson. He seems to think that if he puts a chatty paragraph on either side, he can get away with impenetrable gibberish like: "Initially I got over-excited when its high negative birefringence implied bases oriented strongly perpendicular to the putative helical axis."

Watson knows readers can get lost, he's just not always clear on where. "Girls, Genes and Gamow" includes no glossary of scientific terms such as "birefringence" and "helical axis," but Watson kindly provides us with a compendium of 91 names that reads a lot like a Who's Who of the century's scientific bigwigs. All these names are dropped, copiously, throughout the book, most of them without much introduction.

One such is George Gamow, a Russian theoretical physicist who becomes interested in biology. I'm still not sure why Gamow won a place in the title, but he does provide Watson with a convenient segue into his own little pranks. Gamow, Watson tells us, was a big-time practical joker -- for instance, he once persuaded a handful of European physicists to write to the editor of Naturwissenshaften, a prestigious German scientific journal, to say that a paper they'd published had been a hoax. It wasn't, but Gamow and Watson and their pals got a good knee-slap out of it. Watson relishes the telling of his own capers -- getting a genuine hoax paper published in Nature, for instance, and sending out false invitations to make-believe parties.

There were plenty of people annoyed (or worse) by Watson's game playing. No doubt some of them hoped that some day they'd have the last laugh. And I can't help but wonder if one of them suggested he write this book.

Alison Motluk is a freelance writer based in Toronto