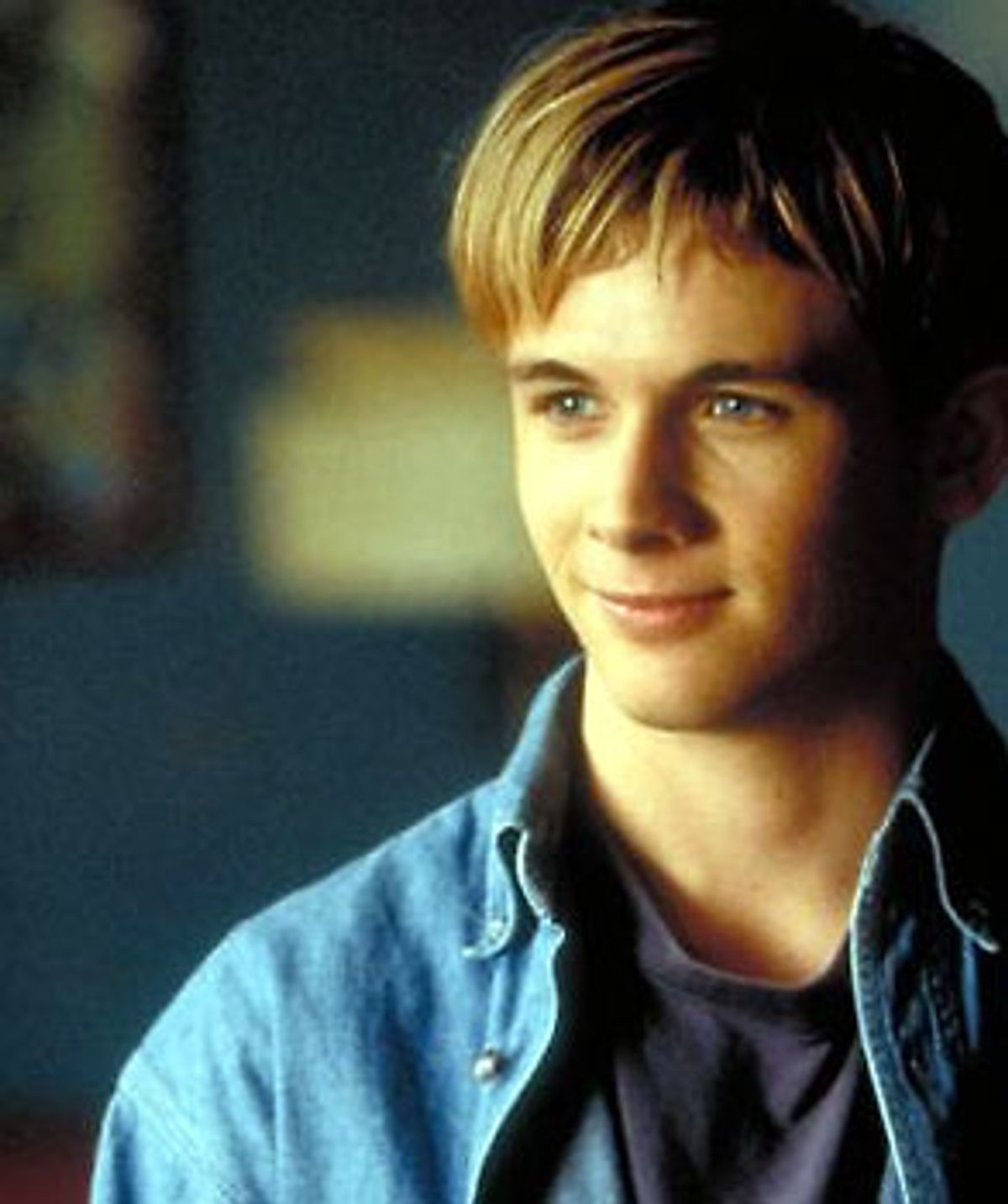 I once had a job interview with a network movie-of-the-week producer who informed me, within seconds of my walking in the door, that the only reason he'd called me in was because we'd attended the same university. Did I enjoy it there? Oh, did I? Because he hated it deeply, and what, by the way, did movies of the week mean to me? Feeling like someone who had just walked into that old Groucho Marx joke about not wanting to join any club that will take me, I took a long pause before trying to put what few feelings I had on the subject into words. Would I offend him by acknowledging what I always assumed was the intentional prurience and sensationalism of the average ripped-from-the-headlines dramatization, wink, wink? Would I come across as disingenuous or naive or depressingly idealistic if I didn't? It was a gamble either way. I went with the issue-of-the-week angle and he kicked me out of his office.

I was reminded of my employer manqué upon receiving copies of two headline-inspired true stories set to air in the coming week, although only one of them, NBC's "The Matthew Shepard Story," which airs Saturday, March 16, at 9 p.m. (8 Central), actually qualifies as part of the genre. Produced by Goldie Hawn, directed by Roger Spottiswoode and written with the cooperation of Judy Shepard, Matthew's mother, "The Matthew Shepard Story" stars Shane Meier as Matthew and Stockard Channing and Sam Waterston as his parents, Judy and Dennis. The story begins with the now-legendary murder of Shepard, an openly gay student at the University of Wyoming in Laramie. Spottiswoode depicts the killing as an almost balletic experience, with great dragon yawns on the soundtrack accompanying every blow. Then the film skips a year and ends with Judy and Dennis' decision not to pursue the death penalty for Matthew's assailant, Aaron McKinney, so that he may thank Matthew for his life every day.

In Channing and Waterston's capable but perhaps overly efficient hands, Judy and Dennis Shepard don't exude the grieving-parent vibe so much as they do the crusading-nonprofit-worker vibe. This is too bad, because Shepard's story is much sadder than the format allows you to feel. In another ill-advised move, Matthew's life story is reenacted based on the somewhat distant, somewhat sparse and often secondhand recollections of his parents, whose prism, it stands to reason, is probably not free of smudges. These scenes from Matthew's life -- he jerks away when a Laramie girl tries to kiss him after a dance; he flirts with a swarthy sophomore at his cosmopolitan Swiss boarding school; he enters the university, where he joins a gay student group and starts throwing big parties for his friends, making Judy a little uncomfortable -- are interspersed between moody, tense vignettes of Sam and Judy as they struggle to write a victim's statement that will get Aaron McKinney the death sentence, before they experience a change of heart.

If there is anything new to be said about hate crimes, grieving families or the age-old question, "How could this happen here?" it's not addressed in "The Matthew Shepard Story." Those are, however, precisely the questions behind HBO's recent "The Laramie Project," based on the Moisés Kaufman play in which a troupe of New York actors is deployed to Laramie to interview its residents and then interpret them verbatim, Anna Deavere Smith/Eve Ensler style. (In the film version, which premiered a week earlier than originally intended after NBC scheduled its drama against it, both the New York actors and the Laramie residents are portrayed by Christina Ricci, Janeane Garofalo, Steve Buscemi and other celebrities.

But the NBC film does teach us interesting things about Matthew himself. He felt relatively comfortable coming out to his understanding parents while still in high school, he appeared to have the support of friends and he arrived at college completely out of the closet. In fact, you can't help feeling that Matthew's decision to attend the University of Wyoming -- portrayed here as motivated by a brutal attack he suffered while on a class trip to Morocco, and which may cause you to yell out, "No! For God's sake! Not Wyoming!" horror movie-style -- was arrived at in part because, despite some bad experiences, Matthew felt safe and comfortable with who he was.

The new HBO documentary "Con Man" (Tuesday, March 19, at 7 p.m.), directed by Jesse Moss, deals with another college student grappling with identity issues. "How could this happen here?" is exactly the question Princeton University asked itself after discovering that a sterling student, track star and Ivy Club member named Alexi Indris Santana was actually a 30-year-old named James Hogue, who had applied for admission from prison in Utah.

There's been a rash of "Logan's Run"-style stories about 30-year-olds claiming to be teenagers in order to gain access to some aspect of life they missed out on the first time around. The latest of these, Emily White's story about Treva Throneberry, the 29-year-old who reinvented herself as 16-year-old Brianna Stewart, which appeared in the March 10 New York Times Magazine, probably takes the nut cake. Even from jail -- where she landed on charges of defrauding the state and the foster care system -- Throneberry refuses to let go of her pigtailed 19-year-old self. A few years ago, there was the famous story of 19-year-old "Felicity" writer Riley Weston, who turned out to be a 32-year-old frustrated actor-turned-writer named Kimberlee Kramer (nee Seaman). As the third installment in a bizarre series, Hogue's story (the subject of a New Yorker story in September) makes the trend official. Eighteen is the new 30. If you're crazy. Or desperate.

Moss's interest in Hogue's life dates to 1985, when the two of them attended Palo Alto High School, in California. At the time, Hogue was 26 and going by the name of Jay Mitchell Huntsman. The film begins when it's discovered that Hogue is not, in fact, the San Diego-born, Nevada commune-raised Swedish orphan he made himself out to be. (Hogue was scrupulous about records -- he assumed the identity of a deceased infant born the year he wanted to have been born -- but was consistently a bit too flamboyant about his back story.) Instead, he was a 26-year-old college dropout from Kansas City, Kan. Five years after Hogue's abrupt disappearance from Palo Alto, a high-school track teammate recognized him while attending a meet at Princeton.

Despite Hogue's many deceptions, the people who knew him at Princeton appear to be fascinated by him. More than one acquaintance calls him a genius. Asks one classmate, "Why not just reprimand him and leave him alone?" (Hogue was getting A's and B's at the time he was discovered.) Says another, "It makes sense that this drama would play out on a college campus, a place where people come to reinvent themselves." And yet, as his public defender points out, joining the track team was a good way to garner unwanted attention. "He must have believed he was who he said he was, that he was living this life."

The irony of Hogue's situation is that he was living that life. As his (actual) high school friend Keith Mark points out, "Jim Hogue beat those boys on the track. Jim took those entrance exams. He did all the class work. He got the offer to be in the [Ivy] club." As the public defender puts it, Princeton got taken, and didn't like it.

Hogue's efforts to reinvent himself via an exotic international background and an elite education seem pretty specific, but he never articulates his stance on class identity and its relation to opportunity as well as Mark does. "I'm amused that he pulled the wool over Princeton," Mark says. "If he would have pulled the wool over Northern Iowa, I wouldn't be so amused."

Instead, Hogue presents his choices as theater ("It was like being in a play, I was a character"), as redemption ("Because I want to start all over again ... without the burdens of my past"), as pathology ("If I were a drug addict or alcoholic there would have been millions of tedious AA meetings, but this is a different form of addiction not recognized as having a remedy. Having a different moral standard than what's recognized as the correct one.")

Moss finally catches up to Hogue in the Colorado hinterlands, where Hogue is disappointed to discover you still can't hide from your past. ("You can see Colorado Springs and Santa Fe. I wish it were more isolated than this. It's a little disappointing.") Despite Hogue's many creepy evasions, his story plays as infinitely sadder than the predictable television drama of Shepard's story, which is tragic.