Lifetime goes to the Balkans in a shamefully botched weeper about an American woman's search for her missing photojournalist husband. 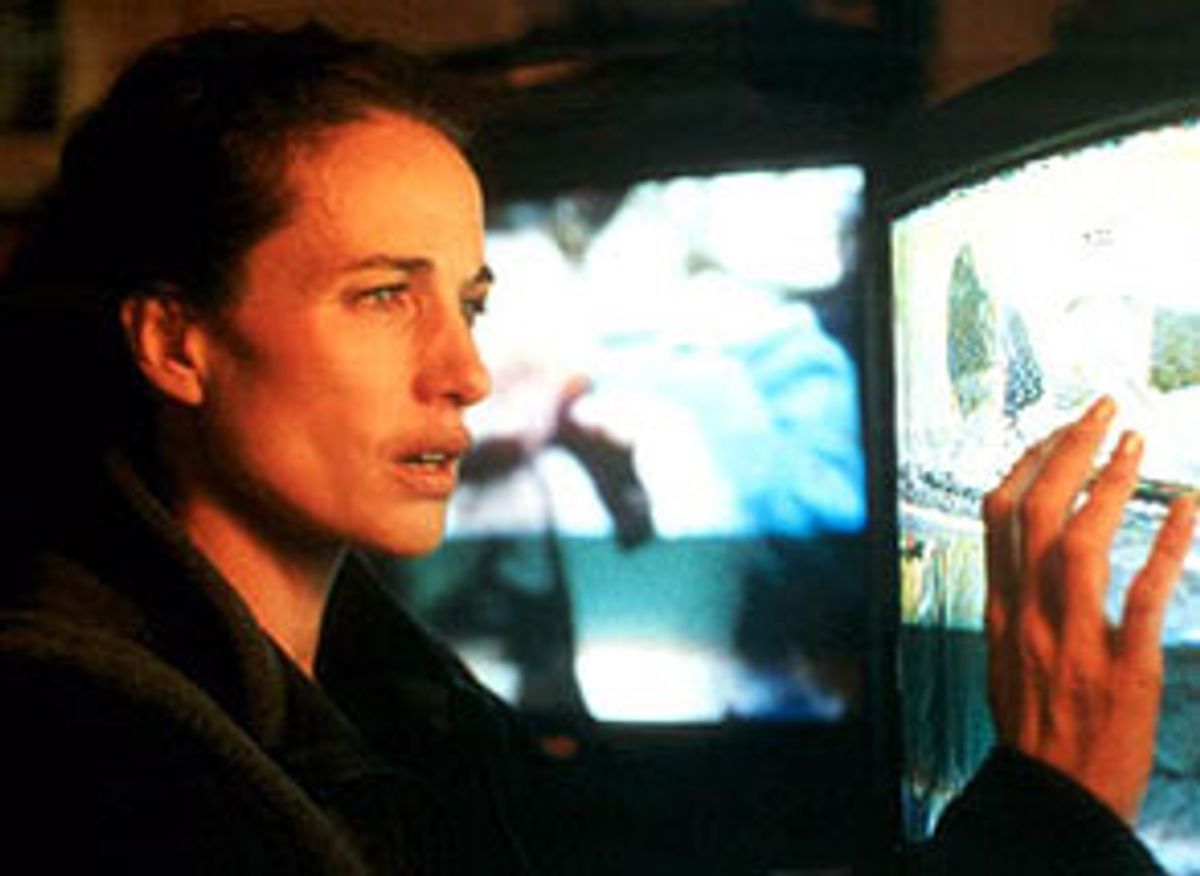 To borrow the old French joke about English shoes, "Harrison's Flowers" seems like a movie made by people who have heard of movies but never actually seen one. It's a hysterical, schizophrenic mishmash of styles and elements, a gruesome and realistic war film wrapped in a weepy Hallmark card. If the Lifetime network made a TV film about the Balkan conflict -- well, it would probably be better than this one.

Arguably this kind of "Missing" meets "Not Without My Daughter" movie, in which a coddled American is swept up in the exotic chaos of some televised Third World carnage, stems from an honorable impulse. Indeed, when New Jersey housewife Sarah Lloyd (Andie MacDowell), all charming crow's feet and permanent boo-hoo face, plunges into the Serbo-Croatian conflict of the early '90s in search of her missing husband, the film abruptly turns gripping, even shocking. Of course, that's largely because everybody stops talking and you forget how bad writer-director-producer Elie Chouraqui's dialogue is.

There is scarcely a scene in the French director's film where somebody doesn't plant his feet firmly and deliver a big glob of expository prose straight into the camera. (Person 1, watching war footage on TV: "A bunch of militias settling old scores." Person 2: "Yeah. Ethnic skirmishes.") I would be tempted to argue that this is some kind of Brechtian distancing device if it weren't for the lugubrious violin score sobbing away in the background, always threatening to turn into Samuel Barber's "Adagio for Strings" and never quite getting there.

Sarah's husband, a soulful-looking Newsweek photographer named Harrison (David Strathairn), keeps telling his faintly slimy English editor (Alun Armstrong) that he doesn't want to go back out into incredibly dangerous wartime situations: "Sam, all I can think of now are Sarah and the kids!" Sam's not interested: "There is a magazine to think of, for Christ's sake!" (That's the way journalists talk, all right.) Harrison shuffles his feet and agrees, yes, for Christ's sake and Newsweek's, he'll make one last foray into a lunatic war zone. But, really, no more -- this is it! It's funny, though; he never used to get clammy hands like this before an assignment. The violins drone on and the clouds drip. Sarah and their doleful son already look like they've been up all night crying, and Harrison's not even dead yet.

Oops, forget I said that. Anyway, he isn't dead. He can't be, according to Sarah. Just because he disappeared somewhere amid the slaughter of the Croatian boondocks and a building fell on him doesn't make him dead. "If he were dead," Sarah moans to someone in the excess of her profoundly maddening despair, "something would have broken inside me."

Yes, I have personally experienced grief and I recognize that grieving people can act crazy and that it's not nice to make fun of them. But MacDowell, who is a beautiful woman and customarily at least a competent actress, plays such an amped-up fictional I'm-soaking-in-it version of grief here that I just wanted to leap up there into her gloomy yet tasteful old house, turn on some lights and slap a merengue record on the stereo. (At least it makes sense when Sarah throws out the people who are trying to say kaddish. They must have the wrong address. I mean, who called the rabbi for a guy named Harrison Lloyd?)

So off Sarah goes into the ruins of Yugoslavia, armed with nothing more than a grainy image from CNN that might or might not be Harrison (this movie's attempts to replicate the look and feeling of news broadcasts are especially clueless). As striking as Chouraqui's staging of the Croatian conflict is -- he shot in the Czech Republic, where they'll basically pay you to blow up those Soviet-era apartment blocks -- there remains something fundamentally bogus about the whole enterprise. About three minutes after Sarah crosses the Austrian border, her car gets run over by a tank, her Croatian traveling companion is shot in the head and some greasy character in fatigues is getting ready to rape her.

She evades this fate somehow and ends up trailing after the murderous Serbian militias in the company of two freelance photojournalists (Adrien Brody and Brendan Gleeson), both more or less rivals of her missing husband. With these two fine actors commanding this segment, we get just a whiff of what "Harrison's Flowers" might have been: a challenging action film about the desperate, dirty and morally ambiguous job of wartime photography. Brody, with his obsessive manner and half-handsome ferret face, is one of those actors who seems like an original talent but somehow gets trapped in well-meaning crapola; Gleeson, an Irish actor best known for his roles in "The General" and "The Field," is a terrific character player still largely unknown to Americans.

All this, believe it or not, is before "Harrison's Flowers" really starts to get stupid. (The title, by the way, refers to the disappeared husband's hothouse back in New Jersey. One guess as to whether his near-silent tot tends the blooms while he's gone.) Harrison's best friend Yeager (Elias Koteas), who seems to be important even though he plays no role in the plot, suddenly shows up in Croatia and becomes the narrator. That's right, just as the nonmystery over Harrison's fate is being solved, some guy appears from nowhere to tell us about how everybody goes home and lives happily ever after (except for all the people who got shot in the head in the Croatian boondocks).

There's a legendary Z-grade horror film called "The Creeping Terror" (mostly filmed on the grounds of Rock Hudson's Lake Tahoe estate) in which a narrator has to take over after the dialogue gets so out of sync that the bathing beauty's lines start coming out of the army general's mouth. "Harrison's Flowers" doesn't even have the excuse of hilarious incompetence. The fact that its sound and photography are gracefully crafted, or that fragments of a tolerable film are visible here and there, only makes its dumb-ass, romance-novel version of tragedy worse. This is one of the most badly botched mainstream movies I've seen in years; the fact that it's being released now, when we're especially sensitive to the risks journalists face in wartime, would be shameful if anyone were likely to pay attention.