An Ox, a Rat, a Pig and a Tiger, all about to climb into the same boat. Will this ark float or not? 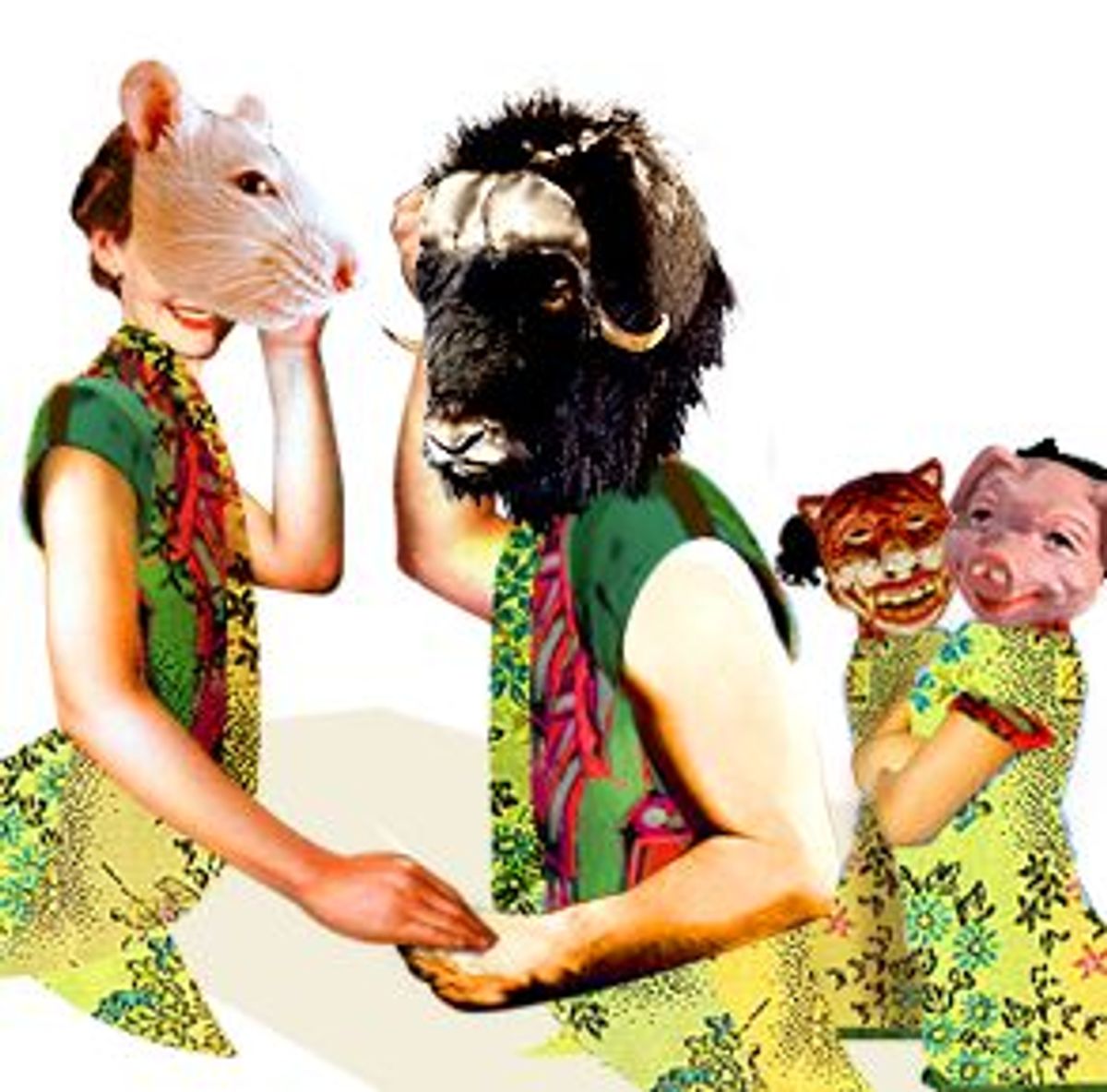 This week, we contemplate a question from perhaps the sweetest guy on the planet. Evan isn't worried about whether he's compatible with his girlfriend. He knows he is. He just wants to make sure that, if the two of them get married, the pairing will be felicitous for his two very little girls, Ruby and Saskia. Evan writes, "I'm a single dad with two young daughters and I have been seeing a wonderful woman for the past year. Things seem well, but I'd like to get perspective on how the four of us work, especially with my feisty younger daughter, Saskia." Every person in this prospective family has a different Chinese birth year, and a different Western Zodiac sign as well. Can the stars orchestrate this family circus into a successful act?

According to Chinese lore, the Ox, which you might think of as an unflashy kind of creature, managed to win second place in the Chinese year ranking, because he had such a good nature; he knew how important it was to be helpful to others. As the story goes, all the animals were summoned to Buddha to say goodbye as he prepared to lift off from Earth. The 12 animals that showed up to pay their respects earned a place on the astrological calendar according to the order in which they turned up. The Rat, who had been cleverest about rounding everyone up, made sure to be first by catching a ride in on the back of the dutiful, compliant Ox. The powerful, beautiful Tiger knew from respect; he was right behind them. Headstrong Horse only placed seventh, despite his speed, because he resented being told where to go. And the naughty Pig came in last, but did at least show up, which was worth something!

The Ox and the Rat have had a complex relationship ever since then; better as lovers though than as co-workers, because every now and then, an Ox in an office begins to wonder if his Rat colleague might be taking advantage of him in some way. But in a romantic relationship, they get along famously. The Ox is enchanted by the Rat's sparkle, while the socially astute, family-building Rat enormously respects the Ox's trustworthiness and perseverance. The Ox and Rat combination is a wonderful way to head a household. Evan has a really lucky combination; Ox grounds him, while his Monkey birth hour gives him poise, humor and shrewd business sense, and makes him more adaptable than some Oxen. (His Water year sign gives him another boost in adaptability.) Meanwhile, his Aries birth month gives him creativity, ambition and strong family sense. Aries natives thrive when they feel indispensable to a close network of relatives. I think that, in Evan's case, Aries moodiness will be lightened by the Monkey wit and the Ox's innate "let's just get on with it" mentality.

Lily also has a well-balanced meld; her subtle, social, adept, quick-thinking, acquisitive Rat character is wedded to the pragmatic, thoughtful, Capricorn month; which means she is a woman who makes decisions for long-term, and never makes them lightly. She will not be flighty, she knows how to ride out difficulties, and Water Rat is especially gifted at sensing other people's emotions, so she'll be a great smoother-over of any difficulties.

Assuming Ruby is in fact a Cancer Wood Pig, born in the hour of the Horse, she will be loyal to her family and eager to please. Pig is strongly compatible in the parent-child relation with both Rat and Ox. Ruby's Cancer month makes her potentially quite sensitive and emotional, and the Cancer-Pig meld can produce greediness for pleasure and possessions, and problems with self-discipline. Still, I believe the fortunate Wood year birth reins in the Pig propensity to excess here, -- besides granting her the gift of good judgment and unusual tact -- so I think Ruby will be just fine. You might try to gently guide her to establish sensible limits for herself early on, just in case. Pigs are usually very popular and make friends easily, and Wood Pigs are especially generous and lovable. Ruby's Cancer sun sign means she will be good at very many things, but will have a hard time figuring out what she cares most about, or wants to do with her life, in school and later work. On the whole, she'll be a sunny child, quietly sociable, well-meaning and hardworking. Any bursts of excitability will probably come from her restless Horse-hour birth.

It's funny that, as you sense, Saskia really is more of a wild card, at least as far as her moon sign is concerned. Tigers get along a wee bit better with Rats than with Oxen, but the relationship still takes work and communication. The most important thing for you and Lily to keep in mind is that Tiger does not respond well to criticism. They are so noble and charming that if they sense they are failing to please, they can't believe it -- it feels to them like a great injustice. So try to hold your tongues unless something really matters. However, if Saskia was born in the hour of the Ox, you lucked out; she will approve of you and respect you on a basic, unshakable level. Also, being an Ox-hour Tiger, she'll probably feel free to tell you if she's mad (Pisces may mute this effect; try to be observant), so any grievances are likely to get aired, rather than fester.

As a Tiger, Saskia might be more flamboyant and attention-seeking than the three of you; if so, try not to think that different is wrong. Still, as an Earth Tiger, the calmest and most realistic of the Tiger years, she should be fairly well-attuned to the rest of the family, and her Pisces sun sign will also help make her get along well with you and Lily -- Ox and Rat. Pisces girls are the most inscrutable sign in the calendar; calm, feminine, perfectionist and socially astute, they try to blend in to their surroundings. While projecting feminine gentleness, and seeming to defer to their superiors and elders, they manage to subtly lay down rules for behavior that people in their families and peer groups can't resist following.

More good news: Saskia and Ruby should get along very well; Pigs and Tigers quarrel a lot, but they have strong bonds and great affinity for each other, and will make each other laugh.

So relax -- it looks like there won't be strife in the Ark, or rather, none sent by the stars!