Zombies! Mutant Doberman pinschers! Milla Jovovich in a slinky red slip-dress! Wake me when it's over. 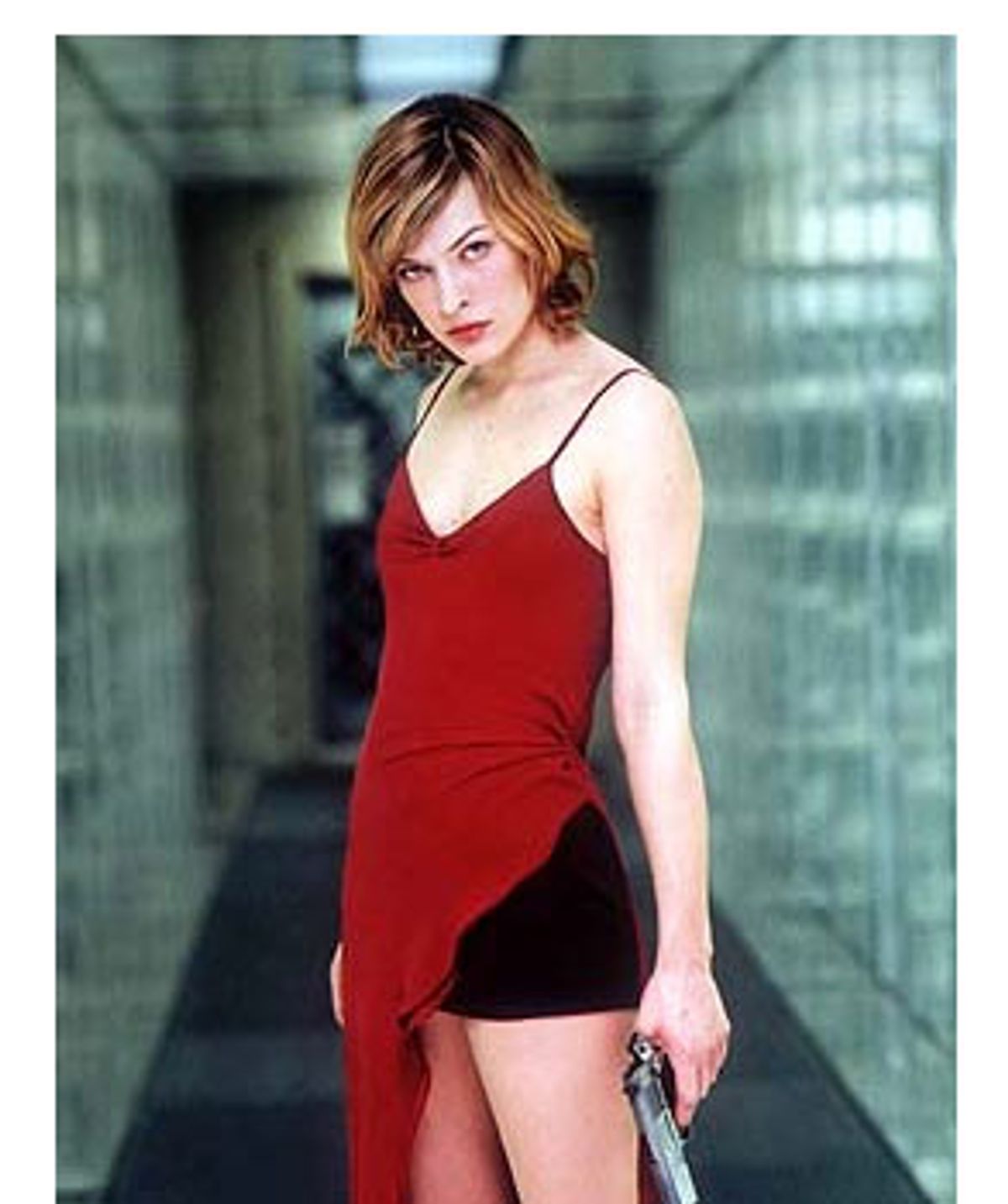 If the appeal of playing video games is that you have some control over the outcome, then what's so exciting about seeing characters from those games left to their own deadly dull devices on a movie screen? "Resident Evil" doesn't even begin to answer that question. No one's asking for well-developed characters or even a coherent story line (though neither would hurt). But the action sequences in "Resident Evil" are stagy and disconnected, and although there are a few cheesily awesome effects (an invisible laser that can silently and swiftly slice a body into neat diamond-shaped portions -- kewl!), most of the dangers the characters face feel redundant and well-catalogued. Look out -- here come a bunch of bloodthirsty zombies! Hey, watch out for those mutant Dobermans! Don't look now -- more zombies! And so forth.

None of those zombies or bad-ass doggies would exist if it weren't for the mega-evil Umbrella Corporation, a bioengineering conglomerate that's been doing some very naughty experiments in its basement. When a vial of virus juice breaks and contaminates Umbrella's vast underground research facility (known as the Hive), the supercomputer that oversees it (known as the Red Queen) locks the place down and kills everyone inside.

But all those people are not really dead. Viral contamination has turned them into a league of zombies with hollowed-out eyes, bits of their faces eaten off, and bad posture -- you can spot them slouching toward you a mile away. Alice (Milla Jovovich) and Rain (Michelle Rodriguez) lead a small crew of commandos deep into the Hive to disable the Red Queen and save the world from this treacherous virus.

The first stretch of "Resident Evil" suggests that writer and director Paul W.S. Anderson ("Mortal Kombat") thinks that "suspense" means making people wait a long time for stuff to actually happen. Then when things finally do start happening, you wish they would stop. Alice, Rain and their team spend the whole movie rushing about the Hive, fending off those "Night of the Living Dead" ghoulies (who have the power to infect the living by inflicting the merest scratch) and a pathetic handful of other beasties (namely, the aforementioned Dobermans and an Alien-like slime thingy). Some loud, dull clanking industrial noises pop up on the soundtrack now and then, to cue us in to when we're supposed to get really excited. And there are a few moments designed to make us leap out of our seats (decapitation by elevator door, anyone?).

Jovovich may not get to be much of an actress here, but with those merciless pale-blue eyes and that haughty feline smile, she at least has the right look to carry off cartoonish characters like Alice. She doesn't look half-bad here, strutting about in supple black motorcycle boots and a slinky red slip-dress with coordinating hot pants: In one sequence she strides across a long industrial corridor, swinging her long legs as if to mimic the pixillated jerkiness of a video game.

But with the exception of crushing a zombie's skull between her mighty thighs, she doesn't get to do anything particularly interesting. Not that the other actors do either, with the solitary exception of Rodriguez, who is instantly recognizable by her trademark "check out the whites of my eyes" scowl. (Would it be possible for the Screen Actors Guild to start a special fund to buy her a new expression?)

Characters you should have come to care about meet gruesome deaths, but you find yourself not giving a fig: Each time another character gets picked off, you're reminded that it's a good time to check your watch. Most of the time Anderson doesn't even bother to tell us where his characters are in the Hive or what they're doing. (Don't expect much help from the beeping computer-graphic maps that flash onto the screen now and then.) "Resident Evil" is mildly grisly, assaultively noisy and tremendously boring. It's action-packed in the most mindless and mechanical way. And you don't even get to push any buttons.