Who's more bored by this quasi-reality-TV cop caper: Robert De Niro, Eddie Murphy or the audience? 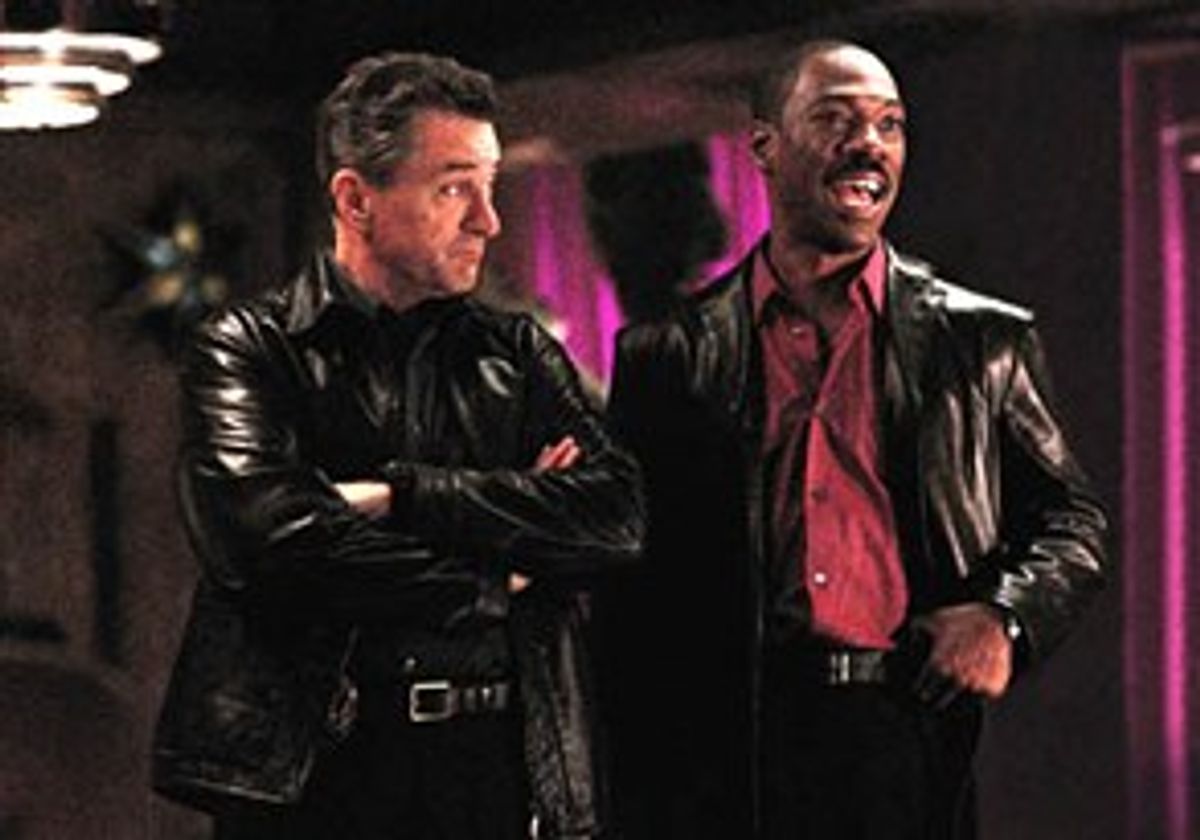 Opening a week after "The Time Machine," "Showtime" offers a real piece of time travel, right back to the bad old days of 1980s cop-buddy movies. "Showtime" isn't particularly assaultive, but it can still make you feel that you never want to see another car chase, explosion or gunfight again.

Ostensibly a parody of reality cop shows (like "Cops" and "World's Most Seriously Messed-Up Police Chases," or whatever it's called) and the clichés of cop dramas, "Showtime" is too lame to see that it falls back on the very clichés it pretends to be parodying. When we first see Trey Sellars (Eddie Murphy), a barely competent patrolman and aspiring actor, he's auditioning for a new TV cop show. His partner in the scene is a black actor chewing on the standard role of the gruff black lieutenant. But a few scenes later, when Mitch Preston (Robert De Niro) is dressed down by his superior, the guy is ... a gruff black lieutenant.

But then, nothing in "Showtime" makes much sense. Mitch shoots out a TV camera when reporters get in the way of an arrest. The network threatens to sue the Los Angeles Police Department unless it agrees to put Mitch on a new reality show that follows two cops around as they do their jobs. No police department, lawsuit or not, would publicly parade a cop who's been accused of being a loose cannon. And if the network is calling the shots, why do they later allow the police chief to pull the plug on the series after it's become a big hit? Was anybody paying attention to the most basic continuity in this movie? Apparently not: At one point, thugs surround a house in the evening and shoot it up with super-duper automatic weapons. But it's daylight before any cops arrive on the scene.

Mitch, who despises publicity and the phoniness of TV cops, is given Trey, who eats up the spotlight, as a partner. As in all cop-buddy movies, the laughs in "Showtime" are meant to come from how mismatched the two partners are. The actors are mismatched, too. De Niro and Murphy simply don't strike any sparks. Murphy has already outgrown this role. With a director to hold him in check, his expressive, handsome face and sleek build can be his best comic assets. Without good direction he resorts to mugging.

Murphy has a few good moments here, especially when William Shatner (as himself) is instructing Trey in how to arch his eyebrows dramatically. But mostly Murphy's acting here is just the pop-eyed, grinning shtick he's done to death. What's dispiriting about watching him is that, after his relaxed performances in the "Doctor Dolittle" movies, and the comic tour de forces of the two "Nutty Professor" pictures, he's moved beyond mugging. How hard can it be to write a good role for this guy?

De Niro has the movie's funniest bit, the opening when the camera pulls back and reveals who the audience is to whom he's giving a no-nonsense talk on what it means to be a cop. Mitch is a guy so focused on his job that he has no patience with anything that doesn't relate to it. It's been a pleasure to watch De Niro reveal the sly comedian in himself in pictures like "Analyze This" and "Meet the Parents."

No, it's not the intense, amazing De Niro of old. But the great thing about his work in comedy is the air of menace he brings with him, that stony "can you believe this" look he turns on the other actors, as if daring them to step out of line. He doesn't overdo the exasperation here -- and since it's the only thing he's been given to play, it's to his credit that he always seems present in the scenes. But he's present mostly as a sort of absence. Mitch is so disgusted with the hyped-up crap he's meant to do that he simply doesn't play ball. And after a while, Mitch's withdrawal seems like De Niro's refusal to be in this lousy movie. And though it's not wrong to wonder why he took the role in the first place, you respect him for his refusal to commit to this junk. He looks as bored as we are.

The action sequences arrive predictably on schedule and it's a tossup as to what causes the louder thuds: the cars that crash into each other or the jokes that crash to the ground (except for a few gags featuring a big, beautiful German shepherd who trots into the movie and makes you smile). As the producer of the show, Rene Russo is utterly defeated by the material, turning in a broad, unfunny performance that has no trace of the subdued snap she's brought to other roles.

"Showtime" was directed by Tom Dey, whose last picture was the enjoyable and charming Western comedy "Shanghai Noon." I loved watching Jackie Chan and Owen Wilson in that picture, especially when they were drunk in a whorehouse bathtub, so relaxed with each other that the scene seemed to proceed on the waves of their sozzled camaraderie. (Some may consider this heresy, but I thought the opening of the picture -- the kidnapping of a Chinese princess from her imperial surroundings -- had more of a storybook feel than anything in "Crouching Tiger, Hidden Dragon.") "Shanghai Noon" wasn't a great piece of filmmaking. But it was a mainstream movie that didn't feel it had to whack you over the head to give you a good time. The most disappointing thing about "Showtime" is that Dey resorts to just that sort of noisy bashing to get the audience to respond.

Talented, innovative filmmakers have somehow managed to keep working and getting their work released (if, sometimes, only sporadically). But for constant moviegoers, who want to be at least be competently entertained in the periods between the really amazing films that come along, it's important to have directors who can handle a routine commercial assignment with some clean, unshowy craft, in the manner of the studio product of the '30s and '40s. "Showtime" makes you wonder: Where have all the competent hacks gone?