Wrath of a terror widow

Yes, we are angry, often justifiably, but we are not ungrateful opportunists making a buck on the death of loved ones. That person is cartoonist Ted Rall. 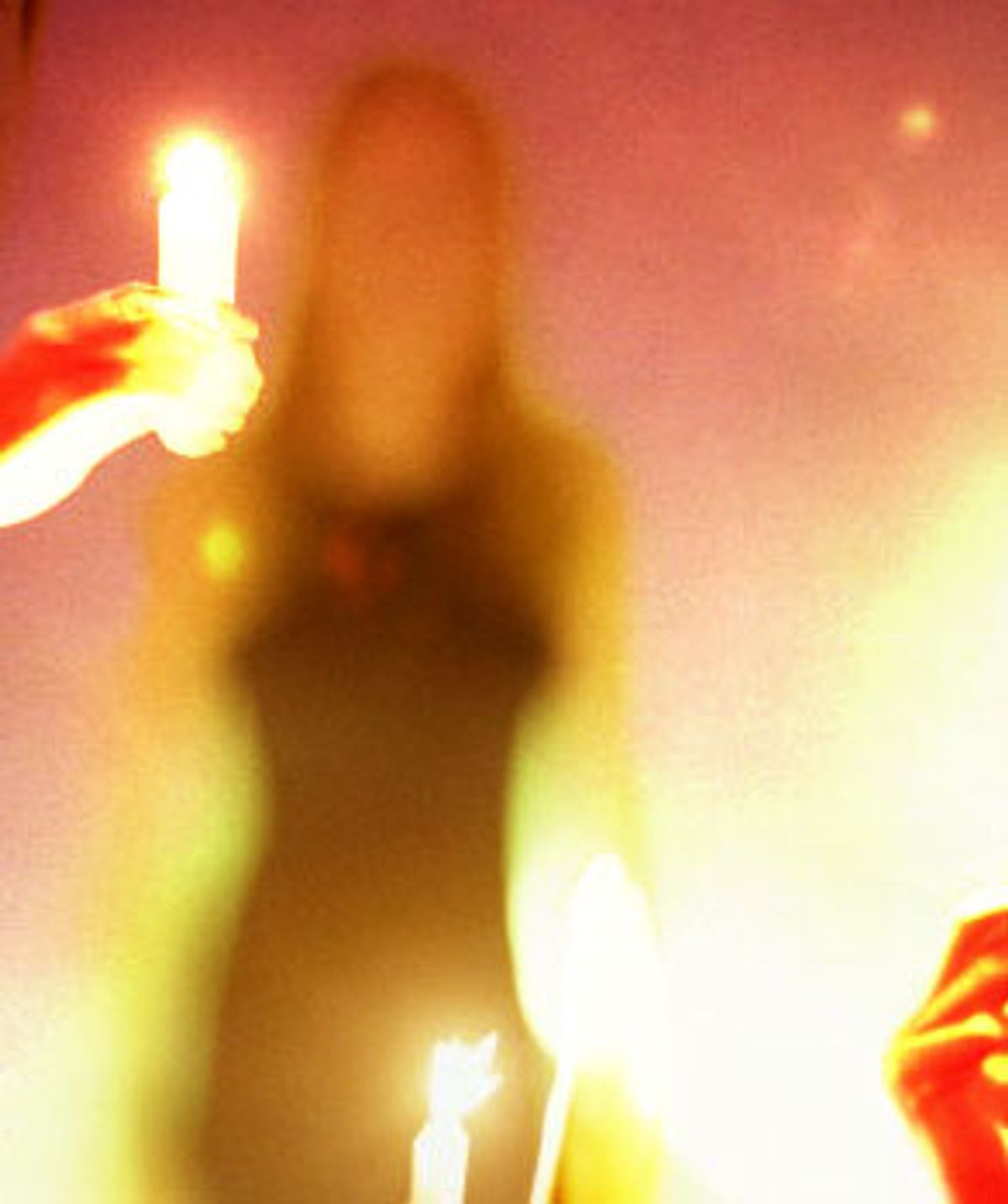 I sent an e-mail to cartoonist Ted Rall last week after I read his "Terror Widows" comic strip online in the New York Times.

"I have asked my dead husband to haunt you for the rest of your miserable days.

Shame on you for making our lives just a little bit harder with your ignorant little rant.

The missive, and an avalanche of ones just like it, did not inspire an apology from Mr. Rall. Instead, he told the press, "I've done a few lousy cartoons in my time that I'd love to take back, but this isn't one of them." And then, in another blast of cruel stupidity, Rall did it again, skewering firefighters in a Gear magazine cartoon.

The Universal Press Syndicate issued a statement in support of Rall, insisting that the cartoonist "is looking at recent news events with the cynical eye of a satirist." And they're right. Rall captured in his cartoon the new view of victims' families as shallow and greedy. Gone is the exaggerated view of the families as noble and tragic, as wounded individuals worthy of unlimited sympathy and support. In its place is the growing impression that we are money-grubbing widows, glad to dump our husbands for a cool million.

I thought the first take on us was problematic, but it was certainly better to be pitied than to be despised to the point that my loved one's death can be painfully and unapologetically satirized. Is there a chance that sometime soon we will be seen for what we are: a diverse and reluctant band of grieving and frightened victims who might be expected to show emotions on occasion? Are there observers of our very public mourning who might concede that our experiences in the last six months cannot be characterized by those who have not had them too?

For instance, I am angry. It is an emotion that could easily be interpreted as unseemly, whiney, or insane, but I am nearly consumed with rage these days -- at Rall, the Red Cross, my therapist, all therapists, the Victim Compensation Fund, my husband Eddie, callous strangers, certain media (you know who you are) and myself.

Of course, anger is the third phase of the grieving process. It comes after denial (no, Eddie's not dead, I just haven't found him yet) and bargaining (if I can find Eddie alive, I promise I'll be a better wife), and before the final phase, which is acceptance (OK, Eddie's dead, my life continues, so what's next?). But this natural flow of grief is aided and abetted in ways that can be hidden or misunderstood.

There is, for example, the case of the federal Victim Compensation Fund. Here is a resource meant to ease the hardship of victims' families and to avoid litigation. This was supposed to be a win-win situation for which we, the victims' families, were supposed to feel grateful. Instead, we are frustrated and hurt, our emotions blithely interpreted by Rall and others as greedy and ungrateful.

The problem? As Kenneth Feinberg, special master of the fund, blundered along, organizing the federal relief effort while fielding ethical questions from the media, he failed to work around the shortcomings of the Air Transportation Safety and System Stabilization Act (H.B. 2926), the statute that created the fund. Didn't anyone think of using a calculator? The math is simple. When you subtract the statute's enumerated setoffs -- Social Security, workers' compensation, 401Ks, life insurance, etc. -- from Feinberg's average $1.6 million award, it's easy to come up with nothing.

And so with the media cameras rolling, victims' families foamed at the mouth and the American public watched in disgust. With all the millions in donations that America made on their behalf, along with this federal handout of $1.6 million per customer, how could these newly rich whiners complain? Rall's cartoon widow exemplified this view: Knowing that her dead husband will never come home (and not caring much about that), she cuddles up with the $3.2 million that she's received from the Red Cross.

Ah, the Red Cross. At this point, I can't imagine cuddling up with anything associated with the Red Cross. Perhaps, like Mr. Feinberg, this well-meaning charity was overwhelmed with the fallout of this disaster. But I am still recovering from the incompetence and insensitivity doled out by the organization during the most vulnerable months of my life. In my darkest fury, I wonder if the generous financial help I finally received -- nowhere near Rall's $3.2 million -- was worth the enormous emotional strain it took to get it. Somewhere in this (attention Mr. Rall!) there is a cartoon:

On five different occasions, I met with many different Red Cross caseworkers, each of whom made me tell my story, from the beginning, and answer the same intake questions: How are you doing? Do you have a support system? Are you working? Are you seeing a therapist? How's the baby? And after each lengthy encounter, with teary eyes, the caseworker du jour would console me with a patriotically beribboned stuffed animal.

One caseworker wanted to perform another full intake when I delivered my husband's death certificate. When I said I had just attended my husband's funeral and didn't feel like talking, she perked up: "So how was the funeral?" Three other caseworkers wrongly assumed my Hispanic husband worked as a sweeper for the Port Authority.

In late October, I finally received a check, not the check. It was $21 for transportation expenses sent in a Federal Express envelope. In early November, a visiting caseworker declared: "What a beautiful Jewish looking baby you have!" In mid-November, I received another Red Cross check (again, not the check) in an envelope mistakenly addressed to my dead husband.

In the beginning of December, when a new caseworker called me, I asked her about the status of my family gift. She adamantly denied the existence of the entire Family Gift program. Weeks later, I finally received the family gift that had been promised in September, when my case was prioritized because I was widowed, seven months pregnant, unemployed and in immediate need of alternate housing.

Then, last week, the arrival of the six-month anniversary and the debut of the first 9/11 movie brought yet another wave of rage. Somehow, I am supposed to accept that my husband's death doesn't belong to his loved ones, that his death is a public spectacle that will be viewed by millions again and again. CBS said of its "9/11" documentary that, while it's not visually graphic, the movie allows viewers an opportunity to hear the "thud" of bodies as they plummeted to the ground. No doubt, Eddie's body made one of those thuds.

Why, oh why, do we unearth the graphic sights and sounds of the day, hold ceremonies before hundreds of cameras with ground zero the background in every shot? To make sure "the rawness" doesn't fade, according one CBS executive producer. This is a worthy goal?

On March 11, I woke up at 8:44 a.m. and rolled over so that I could be unconscious for the infamous 8:46 a.m. moment and the horrific memories -- real (mine) and imagined (Eddie's) -- of the minutes that followed. I canceled my therapy appointment and had a manicure instead. And whenever 9/11 entered my head, I banished it with a song I learned in my baby's music class: "A RamSamsam, a RamSamsam, googly googly googly googly RamSamsam."

A successful day, carefully plotted. But the night was ruthless. On a specially arranged Circle Line boat tour, called "Tribute in Light," victims' families were escorted around New York Harbor. The cruise was meant to be a kindness, but they allowed news teams on board. One reporter sat a row ahead of me, her microphone casually dangling nearby to catch my every gasp or sigh. I asked if she could move it; I wanted to toss it overboard.

The tour guide was incongruously happy-go-lucky, reminding us that the snacks are free: "It doesn't get better than that!" he says. Then, as we pulled away from the dock, he piped up: "Are you excited about this? You should be!" I wanted to toss him overboard. Do these impulses, ignited by grief, make me a monster?

After the tour I found myself downtown, close to the Wall Street corner where Eddie and I had often met for spur of the moment kisses and end of the day encounters. I went to the corner and waited for several minutes. I looked down the long street and remembered how Eddie would walk toward me. I stood there until I felt like a jerk, having been stood up for a date.

I am angry with Eddie for dying on that day, a common reaction that fills me with guilt nonetheless. "To die at 31, without saying goodbye, without ever seeing our baby!" I think. "How dare you!" During one hypochondriacal moment long ago, when I claimed, half in jest, that I was dying, Eddie replied, also half in jest, that I should go to hell if I died now and that he'd certainly hate me forever for it. Will I hate him forever for disappearing from our lives? As I now consider adultery as revenge for his betrayal, I pity the man who will be trapped in this awful love triangle.

Really, I am angry with both of us, that we had no paranormal contingency plan, a place and time to meet after death, a celestial Wall Street corner similar to that one where we frequently met in life. We should have made arrangements for this, along with a promise that every night, at midnight, the dead person would say hello to the living one by flickering the lights. I hate that we wrongly assumed that we would be healthy and happy and together for many years to come, and wasted so much time because of this false sense of abundance.

Sometimes I am angriest at myself for being angry. I berate myself for my rage and then laugh like a madwoman, amused that I've wasted so much time choking on the venom of such an unproductive emotion. And in my laughter I release my anger and take great pleasure in the beauty of each day, as a tribute to Eddie, and to everyone who isn't here to experience it. And I laugh extra hard at people like Rall, so angry with me for not living up to their expectations of what a proper 9/11 widow is supposed to be.

Like Rall's terror widows, I am "eerily calm, [I] smile and crack jokes and laugh out loud." But not because I am an evil person. I laugh because sometimes I have to stop crying. I am calm to sustain my family. And I smile because, angry as I am, I am deeply grateful. Working for the Cantor Relief Fund, sorting through the letters that accompanied donations, I read about sacrifices that donors made in order to send their money: There were children who gave up birthday presents, families that gave up a month's income, people who gave up unemployment checks, a small dairy farm that gave up one of its 24 cows.

Go ahead: Read the hype, but don't believe it. Those of us who were wounded to the core by this tragedy are sad and angry and frequently lost. But we are not ungrateful opportunists who have welcomed the death of loved ones as an opportunity to get rich. That person is Ted Rall, and I pity him, more than anything else.