A disillusioned young Israeli living in the U.S. warns the American left that it's too reluctant to criticize religious fundamentalists -- including George Bush. 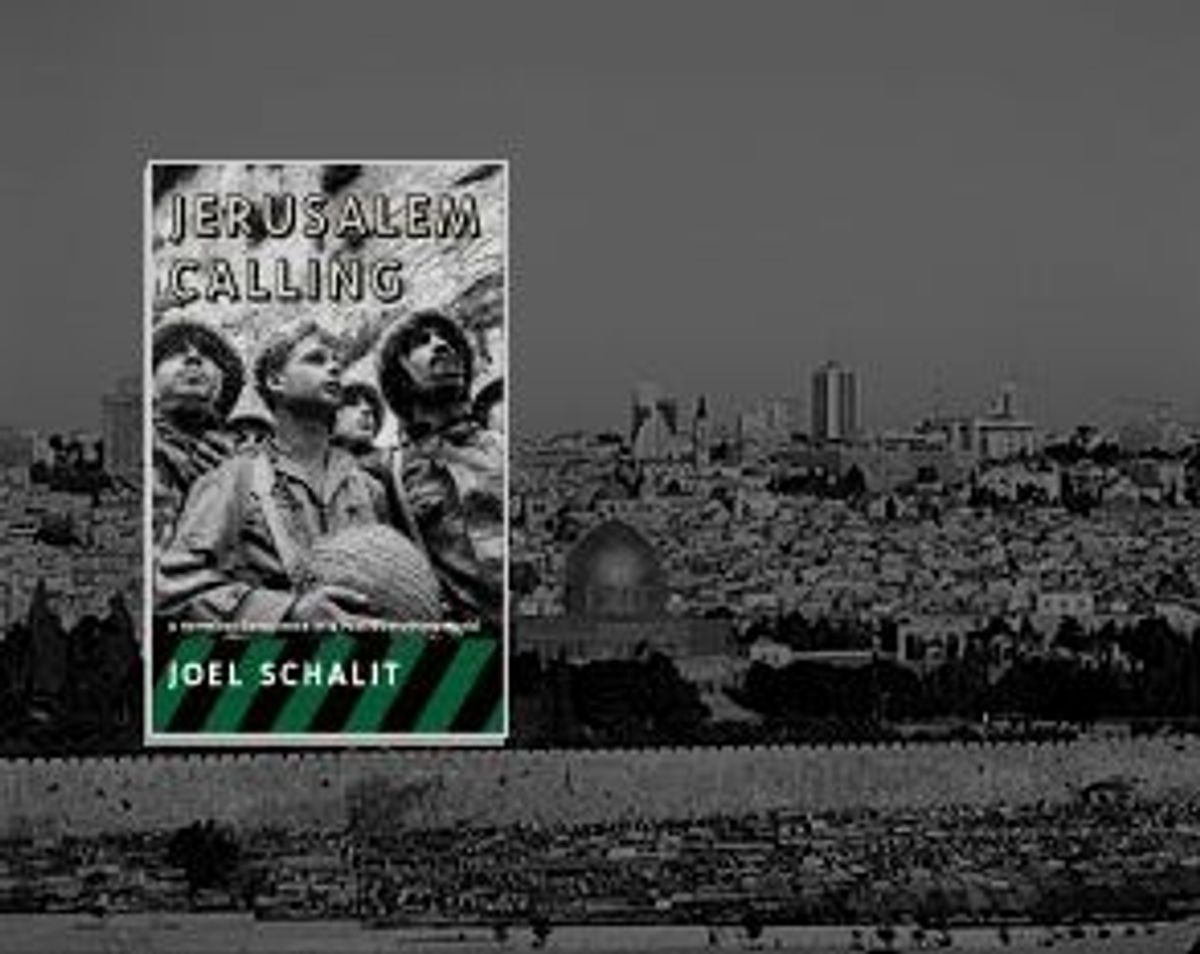 "Yes, I care about religion," writes Joel Schalit. "But so should you, no matter how different your life may be from my own. If you're an American, the reasons for caring [about religion] are deeply powerful."

Schalit is admittedly obsessed with religion, and the publication of his first book, "Jerusalem Calling," a collection of four essays, comes at a time when many Americans have a newfound preoccupation with religion as well. Six months after Sept. 11, they might even sympathize with Schalit's bleak view: that "religion is all about death."

But Schalit is not talking about Islamic fundamentalism. His book focuses on the two kinds of fundamentalism that he knows personally -- Christian and Jewish. Schalit confronts the intersection of religion and politics as an Israeli now living in America, a Marxist academic, a punk rocker and a wandering Jew who regularly listens to Christian talk radio. The book sometimes veers into moralizing and exhausting self-scrutiny, but in two essays, "America the Enchanted" and "My Own Private Israel," Schalit's genuine, urgent concern knocks down doors, and for that reason, "Jerusalem Calling" is worth sifting through.

Schalit attributes his morbid feelings about religion to his Jewish and Israeli identity: "I was raised to believe that dodging death was an essential part of my ethnic identity; everything we did was in some way related to self-preservation." After Schalit arrived in Portland, Ore., to attend an Episcopalian boarding school in the 1980s, Father Thomas Goman, a minister and math teacher who was once Schalit's mentor, led a group of students on a hike up Mount Hood and into a forecasted snowstorm. A heartbroken Schalit saw Goman's dangerous climbs as "something like a perverted act of penitence to prove his own faith." The result was the death of Goman and his students.

The charismatic Father Goman had been a member of Students for a Democratic Society in college; for Schalit he initially represented an ideal combination of progressive politics and faith. Eventually, however, Goman pushed his faith on Schalit, going so far as to insist that Schalit's problems passing geometry arose from an inability to embrace Christianity: "Math is the expression of God's mind in the world. By now, I was hoping you would have figured this out and learned why you should come to Jesus Christ."

Ultimately, the catastrophic results of Goman's all-encompassing faith made Schalit deeply skeptical of even the sunnier facades of Christianity. He's warier still of its more extreme manifestations. In fact, Schalit argues that even seemingly law-abiding Christian fundamentalists share a basic narrative with right-wing militia members: "Marginal communities have in common with the evangelical mainstream ... a radical apocalyptic worldview and a commitment to building a covenant community." He believes the media is to blame for carelessly portraying militia members as ignorant and fundamentalists as nuts.

But it's not just the media who are to blame. According to Schalit, the American left, both scornful of the religious right and overly deferential to it, simply doesn't take this community seriously. When President Bush repeatedly invokes the word "evil," with obvious religious connotations, too many Americans, especially journalists and liberals afraid of insulting someone else's faith, don't bat an eye. As a result, the left fails both to understand the doctrine of the religious right, and to challenge it. To fully understand the religious right's worldview, Schalit suggests, might mean taking a hard look at the Bible. But rather than offering the left or the Democratic Party a method of counterattack, "America the Enchanted" is more of a wake-up call.

As Schalit points out, when the Rev. Jerry Falwell blames the American Civil Liberties Union for the World Trade Center attacks, the reverend has more people clinging to his words than we'd like to think. His fascination with Christian talk radio may have made him a little paranoid, but it also puts him in touch with this subculture. And what Schalit says he's hearing is Christian fundamentalists' self-perceived economic and cultural disenfranchisement: "These anxieties promote not rational decision-making, but a desire to punish those who are deemed responsible for destabilizing the social order" -- in other words, the left and the Democratic Party that represents them.

Schalit sees George Bush and the Republican Party as resembling Israel's Ariel Sharon and the Likud Party: Both leaders are tapping into religious communities whose members feel vulnerable in a modernizing world and resist progressive politics. Some Israelis, like the Hasidic community, would be happier with what Schalit calls a "Jewish Iran," a theocracy not too different from that envisioned by the American religious right. (Whether Schalit's formative experiences in Israel, where religious fundamentalism has had and continues to have such a momentous impact on politics, has made him unduly paranoid about American fundamentalism, or simply better aware of it, is an intriguing question.)

Of Israel, Schalit believes "our religion is the state, even while we have done everything in our power to prevent the state from being reduced to a religion." Yet something more powerful emerges in the essay "My Own Private Israel." While it's obvious that Schalit is enraged by Israeli politics and Israel's treatment of the Palestinians, he also addresses the complex emotional conflict that Israelis are facing -- an identity crisis resulting from the clash between the national imperative of self-preservation and the goal of democracy.

As a young boy, Schalit became obsessed with military apparatus and weaponry, to the point where his father would trot him around at parties to show off his precocious expertise. But with Israel's 1982 invasion of Lebanon, Schalit became disillusioned with his homeland. He left Israel and even deliberately forgot Hebrew, no small transgression for a descendent of a family that arrived in what is now Israel in 1882, at the very beginning of the modern Jewish immigration to historic Palestine. Even so, Schalit's admiration for and romanticism about Israel is undeniably present in this essay. He may reject his old penchant for tanks, but his enthusiasm for Israeli fortitude remains: "The helicopters flying overhead all day, the soldiers on the streets, and the sonic booms of fighter-bombers that shook our house every morning were signifiers of strength I found too compelling to ignore."

Schalit wonders how progressive-minded Israeli Jews can reconcile an identity that is largely based on self-defense, high-tech weapons and strength with their criticism of how Israel uses that power. Schalit admits that during the war in Lebanon (which was waged by the right-wing Likud Party's Ariel Sharon and Menachem Begin), "I became convinced that there were no more just wars to be fought on behalf of the Jewish state." Only in times of peace could Schalit have faith that Israel might become the place of his dreams. But in giving up his language -- also a symbolically vital component of the establishment of a Jewish state -- he realizes that he's turned his back on both his family and the founding values of Israel that he still admires.

In the end, Schalit returns to Israel amid the recent violence that has ravaged the region. Sitting at a relative's bat mitzvah while around him Hasidic cousins mingle with secular ones, Schalit feels anguish at the loss of his once-fluent Hebrew. Does he even have a right to be there with his family, he worries, when he's rejected the language that unifies them as Israelis? Or is he somehow expressing the failure of Israel's ideals? By sharing a few words of Hebrew with an Hasidic cousin and later listening to a Palestinian radio broadcast, Schalit can, at least temporarily, reconcile his inner conflict. At the very least, he realizes, they all -- secular Jews and Palestinians and religious Jews -- share the language of struggle. It is a difficult language, one that needs reinterpreting with each wave of violence and moment of peace, but it should not be forgotten.