How TLC's tear-jerking ultra-reality shows, in which ordinary folks give birth, go on blind dates and undergo cosmetic dentistry, became the hottest thing on daytime cable. 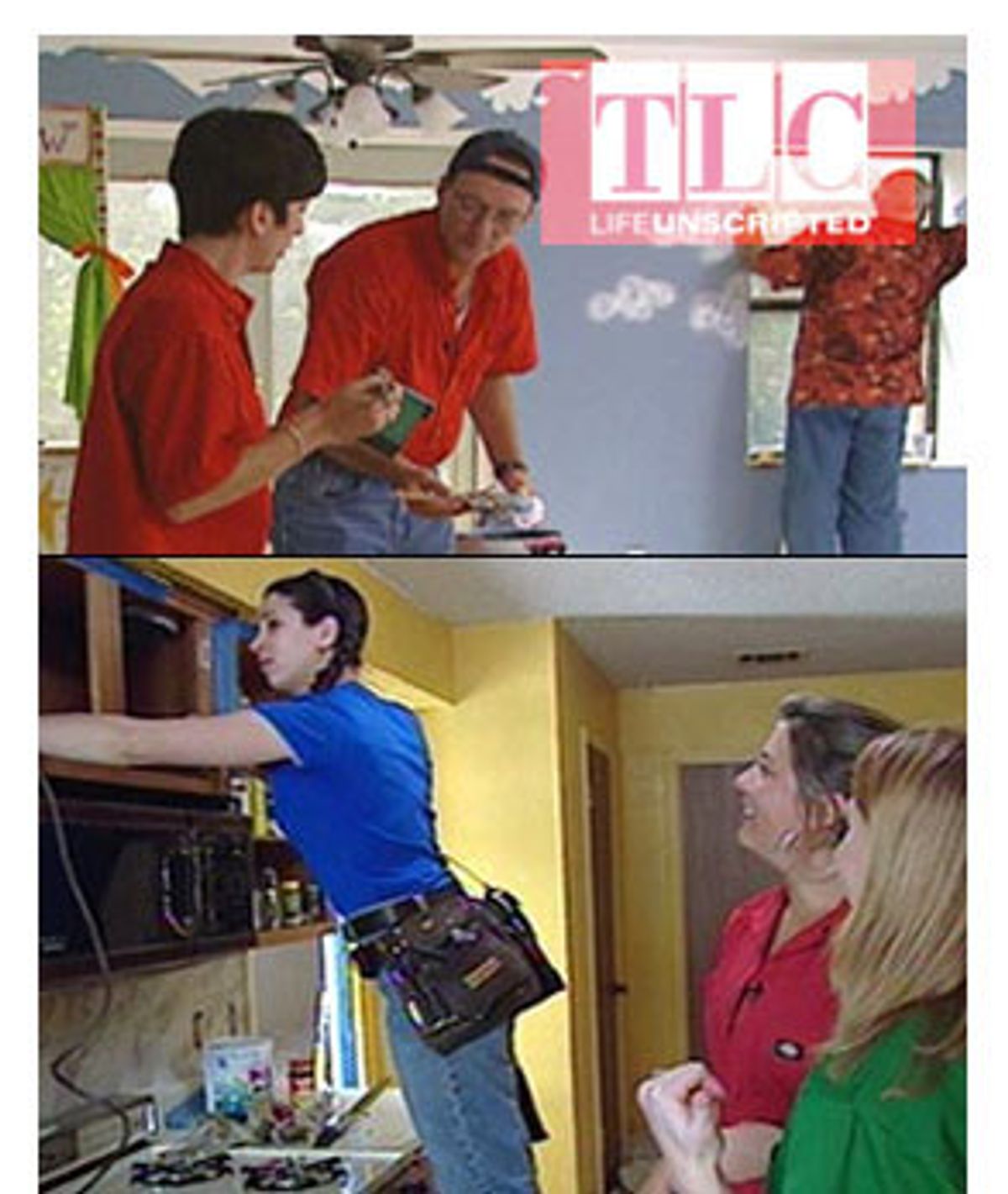 For a programming block that calls itself "the comfort lineup," the daytime schedule on TLC (formerly known as the Learning Channel) features epic discomfort all day, every weekday. You might, for instance, catch a woman who has elected to deliver her baby at home with no painkillers while roaring like an injured lion -- a spectacle somewhat reminiscent of those old movies where somebody downs a bottle of whiskey, bites down on a leather strap and has his leg sawed off.

Sure, I laughed, especially during the underwater wedding ceremony of two scuba divers in love, in which the bride and groom nodded their vows and risked pulmonary collapse for that one, ever-important kiss. But mostly, I cried. Think what you want. The snot flowed freely five times yesterday and I'm not ashamed to admit it. The first time I lost it was upon hearing that single, agonized child-birthing howl. (Can you blame me?) The second time was upon watching a father meet his newborn daughter and whisper, "I've waited to see you for you for so long," before breaking down and weeping openly.

Then I choked up at a couple of weddings, and white-knuckled it through a few drastic haircuts. Things got plenty blurry during one scene in which a woman whose teeth brought to mind a miniature model of Stonehenge (thanks to radiation treatments she'd received for Hodgkin's disease as a teenager, resulting in massive bone loss in her jaw) got a set of porcelain veneers installed and was finally able to smile without covering her mouth. Even the dentist was moved. That she was 39 and lived with her parents ("Even though she's adopted," her mom gushed, "we love her the same as our other kids") didn't help matters. The fifth time I cried was during a Slim-Fast commercial.

That's what a whole day watching TLC will do to you. Every weekday, "Personal TLC" runs back-to-back episodes of its hit series -- "A Baby Story," "A Wedding Story," "A Dating Story," "A Makeover Story" and, most recently, "A Personal Story" (which might have been more accurately titled "A Surgical Story") -- in an uninterrupted block from 9 a.m. to 4 p.m. That's when the insanely popular "Trading Spaces," in which neighbors trade houses for a weekend and completely redecorate one of the rooms, comes on. (I watched that, too, but just because I'm addicted to it, like everyone else.) I'm not the only one losing it, either. Earlier that day, a book editor I know in New York admitted, "You know, I'm not a very emotional person, but I watch it and I just can't help tearing up." My sister in Georgia, who just had a baby, told me, "I used to watch 'A Baby Story' every day, but I had to stop because I got so scared I thought I was going to upchuck the fetus."

The "Trading Spaces" phenomenon can be largely attributed to its suspenseful format. Will the couple across the street like their daughter's room transformed into a Moroccan-themed fantasy? Will unsuspecting friends appreciate the new medieval castle thing in the master bedroom? It isn't as easy to pinpoint the appeal of "Personal TLC," with its documentary-style segments following the lives of real people during what Jana Bennett, TLC's executive vice president and general manager, calls "life-defining moments." The shows began to be developed about three years ago, when Bennett first came to the Discovery Channel Networks, TLC's parent company, as head of programming. They were in large part the creation of Chuck Gingold, who was head of daytime until he recently retired from the Discovery Channel. One by one, each of the shows became a hit.

"I think it's because they're quite intense," Bennett says of the shows' somewhat surprising popularity. "There's an idea of jeopardy. Having a baby is a really big deal. Getting married is a big deal. I think every person [who gets married] wonders, 'Is this person going to turn out OK?' And there is that moment on the altar -- wherever that altar may be -- the question of, 'Are we going to have a runner? Is this going to be a runaway bride situation?' There's jeopardy there.

"Also, people are baring their souls," she adds. "There's a kind of sudden death of your ego that happens on a date, agreeing to go out with someone you don't know. You could just be crushed by it. They are exposing themselves and the audience can see it. Same with the makeovers. People are thinking, 'I may be destroyed by this stylist!' It's risky. Same with the personal story and the surgical risk. There's true risk in these shows; although they are very happy shows and joyful and life-affirming, they are not without grit and realism. Also, they deliver a story."

Three years ago, Bennett launched TLC's "Life Unscripted" branding campaign and redefined the network's overall mission. The tagline, which was created in response to what she considered to be the strengths of the channel, inspired the daytime team to take the channel further in a "factual entertainment" direction. The idea was, Bennett says, "to connect the daytime viewer to human experience. We were looking for something personal. Also, we're a nonfiction network and we didn't want to rely on dramas or documentary reruns."

TLC's daytime shows certainly are consistent; watching all seven hours can make you weep from exhaustion, if for no other reason. Watch enough of "A Baby Story" and the miracle of birth will begin to strike you as an exercise in self-indulgence. Watch a few installments of "A Wedding Story" and you remember Tolstoy's remark about all happy families being the same. Doesn't anyone have a drunken uncle making inappropriate toasts anymore? (Personally, I've attended two weddings where somebody threw up, and on one occasion it was the bride.) Furthermore, there is nothing really all that remarkable about most of the subjects' lives, unless you find it remarkable that anyone can even afford a wedding these days. If anything, they are touching in their ordinariness; watching "Personal TLC" is a little like watching home movies, down to the low production values and narrative lags.

But the wall-to-wall, unadulterated joy seen on TLC daytime has been pretty well matched by the ratings. TLC's daytime lineup is No. 1 in cable for women aged 18 to 34, and very close to the broadcast networks on some days, according to Bennett. (It's "way ahead of Lifetime," she points out, "even though they're supposed to be the channel for women.") More than 9 million viewers tune in to watch the daytime lineup in an average week, and the block is a huge hit with teenage girls, college students and gay men (although "Trading Spaces" accounts for much of that viewership). Fan sites for the shows have also boomed, boasting a collective 12 million page views per month.

"I guess what happened was partly accidental," says Bennett. "But it also came out of a deep understanding of viewers. The audience, particularly in daytime, wants to get to know real people's stories. And then we thought, what are those real stories of people's lives? Take some pivotal, life-defining moments that are really essential and nearly universal. You're taking a plunge into being a new parent, and we capture that feeling everybody has, that feeling of great joy and great terror. It's a life and death thing, having a baby -- thankfully it's not as dangerous as it was before -- but it's still a struggle to be born. We show very joyful moments, but they are also very emotional and very intense."

Arguably, the life-defining moments featured in "A Makeover Story" are somewhat less intense than childbirth, although Bennett insists this show is not about vanity, but about life and transformation: "The people who get the makeovers are people who need to move on in their lives." Subjects for the show are nominated, she explains, by friends or family members. "Like a mother and daughter will nominate [each other] because something has happened, a divorce or a breakup or a big new job."

On "A Makeover Story," a twosome submits to the dictates of a fashion stylist (who often acts and sounds suspiciously like a small-town boutique sales clerk), a hair stylist, a colorist and a makeup artist before attending some personally meaningful social event. Sometimes, the pair consists of a mother and a daughter, a husband and a wife or a father and daughter. Most often, the pair are best friends, formerly fabulous gals turned frumpy stay-at-home moms.

Each show features a segment in which family members harp on some aspect of the participant's appearance ("I want to see her with bright red hair!" says one dark-haired mother of her dark-haired daughter. "She's too Goth or something"), and another in which the two participants go through each other's closets and mock their clothes. ("Overalls, overalls, overalls!") For life unscripted, it's pretty formulaic. Not that this detracts from the fun of watching 31-year-old mom after 31-year-old mom act as though she has never worn a dress and high heels before, or a hair stylist explaining that makeovers are "about grabbing the spirit that gets lost inside and bringing it out."

On "A Dating Story," couples are volunteered for the show by a matchmaker friend or mutual acquaintance. Perhaps because "A Dating Story" does not set the couples up itself, the show lacks the mean-spirited and depressing tone of, say, "Blind Date."

As Bennett remarks when I mention this, the couples on the show aren't desperate. "They don't have to go on this date, they choose to," she says. "On 'Blind Date' you're in a cattle-market situation. You're being shoved onstage. This is a documentary; it's more intimate. And it's more of a matchmaking situation. You haven't volunteered yourself to go on the blind date, somebody else has, and they're a trusted friend -- at that moment."

The newest addition to the "Personal TLC" lineup is "A Personal Story." Though Bennett says these shows are about reconstructive surgery, transformation and physical rituals (one episode, I'm told, features a small child having a disfiguring facial tumor removed), the two episodes I caught were about cosmetic dentistry and liposuction. In fact, the opening credit sequence I saw consisted of a bikini-clad woman posing lithely as a string of superimposed words floated by her -- "liposuction," "self-esteem," "eyelift," "admiration," "reconstructive," "confidence," "pride," "breast augmentation," "dignity" and "rhinoplasty." Not that I'm complaining. Who can resist an extended close-up of 10 pounds of yellow fat coursing through an extra-slender canula during a "power-liposuction" procedure? I, for one, can't get enough. Liberty, dignity, rhinoplasty!

Still, after several seasons of reality programming, now mercifully on the wane, the relative modesty and down-to-earth demeanor of most of the participants in TLC's daytime shows is refreshing. Damn it, these people are cute! But who are they? Why do they choose to participate? And why do they all seem so happy? (There's no money involved.)

Some of them volunteer through the network of Web sites, while others are recruited by network scouts. "There are certain types of people who celebrate life," Bennett somewhat cryptically explains. "You get a certain self-selection of people who -- although they know we don't manipulate [the stories] -- have to be willing to have a camera in their face. That takes a certain personality."

"A Wedding Story," in particular, makes me think of the one good line in that otherwise horrid Jack Nicholson-Helen Hunt vehicle "As Good as It Gets." Hunt makes a comment about how everybody's life is difficult, and Nicholson replies that it's not true. Some people's lives are filled with good times, family, friends and noodle salad. Maybe that's what TLC daytime is offering: a whole lot of noodle salad.