Alas, 1998's vampire disco has shut down, but this sequel offers plenty of gore, goo, creepy orifices and video-game-style action. 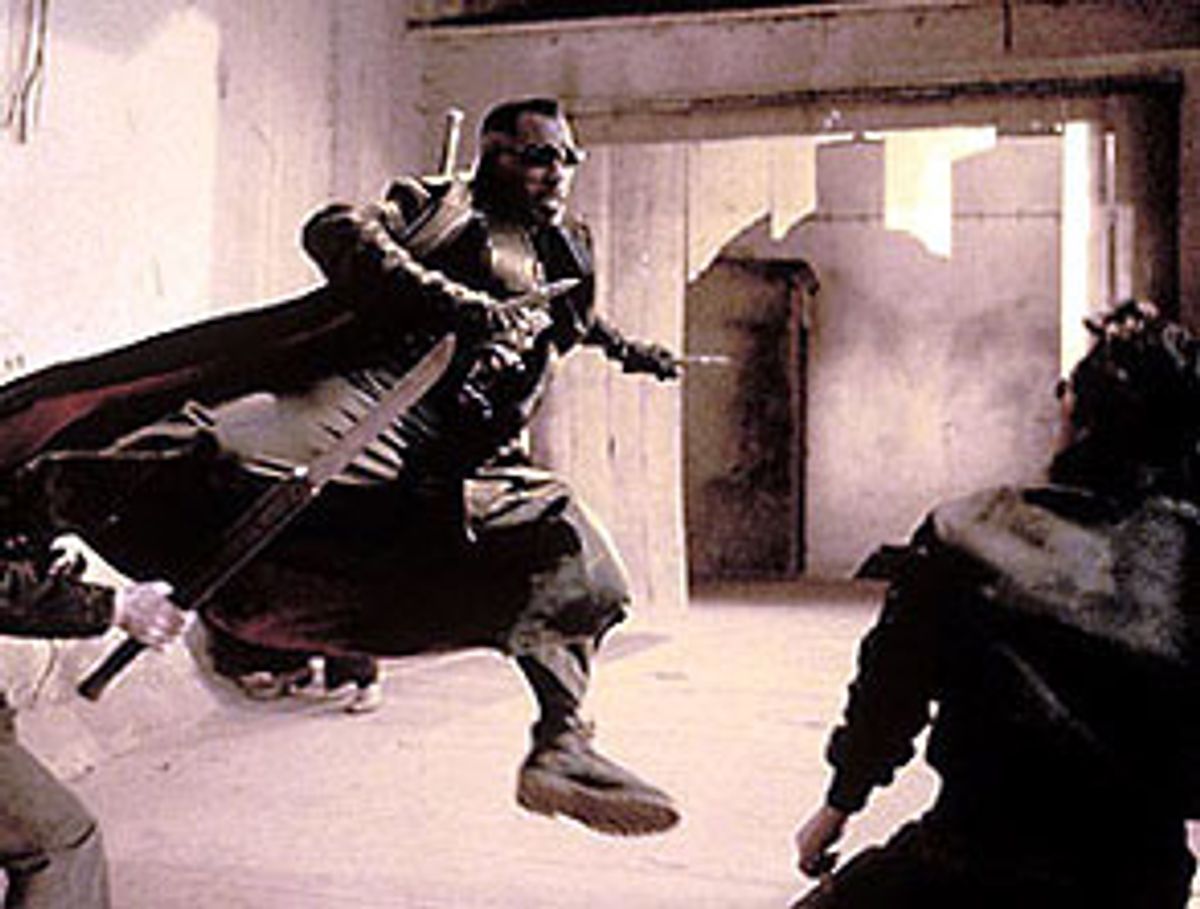 Who could forget the fabulous vampire discothèque scene from Stephen Norrington's 1998 film "Blade," with its dance-floor crowd of downtown-chic bloodsuckers, waving their pale yet shapely arms in the air and gyrating faster and faster to the soundtrack's thudding beat until, at the peak of their orgiastic frenzy, the overhead sprinkler system opens up and douses them all in a shower of blood? Alas, such extravagant days are over for the undead as well as the rest of us, and while there is another vampire nightclub in the new sequel, "Blade II" (directed by Guillermo del Toro), the club is really a kind of safe house. Its windows are blacked out, the entrance is concealed and the habitués are forced to make do with simpler pleasures, like French kissing with razor blades in their mouths.

The fiends are lying low because they're under a double-pronged assault, from our hero, the impassive, saber-toting half-vampire Blade (Wesley Snipes, whose mother was attacked by a vampire as she was giving birth to him) and from a new breed of super-vampires, a rabid pack of skittering ultrapredators who prefer ordinary vampires to humans as prey. Times have changed, but you can still count on a few things in this B-movie netherworld. The first is that if you are in a van trying desperately to escape from a pack of super-vampires crawling all over the vehicle's exterior, the engine simply will not start -- or certainly not on the first try. The second is that someone at some point will say "C'mon, kid! Don't you even think about dying on me!"

First off, we should get the cosmology squared away. In "Blade" and "Blade II" (which are based on a Marvel comic created by Marv Wolfman), vampirism is caused by a virus that infects those bitten by a host. The infection brings on "the Thirst" and an acute vulnerability to silver, garlic and sunlight, along with superhuman agility, relative imperviousness to conventional weapons and a wardrobe made entirely out of leather. (Vampirism is curable, but only through a withdrawal-like process that few can endure.) Blade explains in the film's opening voice-over that, being a half-breed, he has all the vampires' strengths "and none of their weaknesses," which is why they call him Daywalker.

If you're the kind of person who wonders how somebody can be only half-infected with a virus, you won't have much time to dwell on such puzzles. After a brief and bloody prologue, "Blade II" comes out of the gate at full speed, with Blade charging down a corridor, picking off vampires left and right with his silver bullet-loaded automatic weapons. (The vamps torch up from the inside and then turn to person-shaped cinders in a nice special effect.) This is the most video game-like sequence in a film that suffers from way too many fight scenes that last way too long and look way too computer-generated. Of course, a movie like this does need a goodly portion of ass-kicking, and no one does it better than Snipes, but enough is enough. Why spend $9 on the same stuff you can get for a buck or so in that greasy little vidgame pit in the theater lobby?

Blade rescues his old mentor Whistler (Kris Kristofferson) from a pack of vampires who've infected him and are keeping him hooked up to blood-dispensing IVs and suspended in a giant vial of serum. One appealing thing about horror movies is the way that their psychosexual undertones are so blatant that they can hardly be called "under" anything; this one is a Freudian playground. Del Toro (whose previous films include the giant cockroach thriller "Mimic," the village gothic "The Devil's Backbone" and the arthouse curio "Chronos") works in the icky-bodily vein, lingering over oozing fluids, gaping wounds that expose weirdly pulsating organs and various nightmarish visions of pregnancy, gestation and birth including, in this particular case, Kristofferson as an oversized, gray-bearded pseudofetus in -- yes -- leather pants.

Despite Blade's sworn enmity to their kind, the Vampire Nation (not to be confused with Janet Jackson's Rhythm Nation, but, what with all those discothèques, definitely under a groove) sends emissaries to his warehouse lair to engage in a protracted session of kickboxing and to ask for his help in destroying the super-vampire menace. This new breed of bloodsucker can make hash out of the standard model, and the virus that creates them spreads particularly quickly. If you catch it, you lose all your hair, your flesh takes on the veiny coloration of gray quartz, your eye sockets look like someone's been grinding charcoal briquettes into them and instead of a leather outfit, you have to wear a raggedy, homespun-looking overcoat and muffler, like a member of the chorus in "Les Misérables." Or maybe you have to dress that way just because you're from Prague, where this movie, inexplicably, is set. Anyway, no wonder these guys are pissed.

Super-vamp anatomy is a psychoanalyst's wet dream and the occasion for some of the best parts of "Blade II," at least for those who relish gruesome special effects. These beasties have a seam that runs down their chin, and when one of them is closing in on its undead prey, the whole lower half of its face splits open to reveal a Chinese puzzle of phallic/vulval organs that latch onto to the victim's neck. Later on, we're treated to a dissection scene in a vampire lab where the super-vamps are discovered to have an enormous anus right about where their hearts should be. And what more, honestly, can be said about that?

And so it goes: Lots of jostling for alpha-male supremacy between Blade and Reinhardt; proud displays of gleaming weaponry ("That's a pneumatic syringe delivery system"); tense, stealthy expeditions into the city's sewers; fight scenes on elevated platforms; a smidgen of love interest with the vampire overlord's daughter; set pieces of florid carnage; lines like "You're about one cunt hair away from hillbilly heaven" and the predictable double cross. "Blade II" doesn't have quite as much of the wit that enlivened its predecessor, though two wonderfully disgusting toss-away gags involve the vampire overlord snorting pink cocaine and eating blood Jell-O. A potentially promising scene involving a vat of blood falls flat because the liquid looks much more like Hawaiian Punch.

Still, "Blade II" does have Snipes, whose Easter Island cool comes just shy of crossing the line into camp. His Blade is a man who can't head upstairs for bed without a little flourish of his floor-length leather trench coat. The only downside of watching him stand there, glaring sternly at his opponent of the moment while his arms and sword windmill frenetically all over the place, is that there's a little too much of it. That, and the running up the walls and the flipping over and the flying through the air -- all symptoms of the craze for "Matrix"-style martial arts that will only pass with time. Maybe by the time "Blade III" comes out, the vampires will have reopened their disco in SoHo.