A reprimand for Reebok

The running shoes company wanted to give a big cash prize to an Indonesian labor activist. But Dita Sari said no. 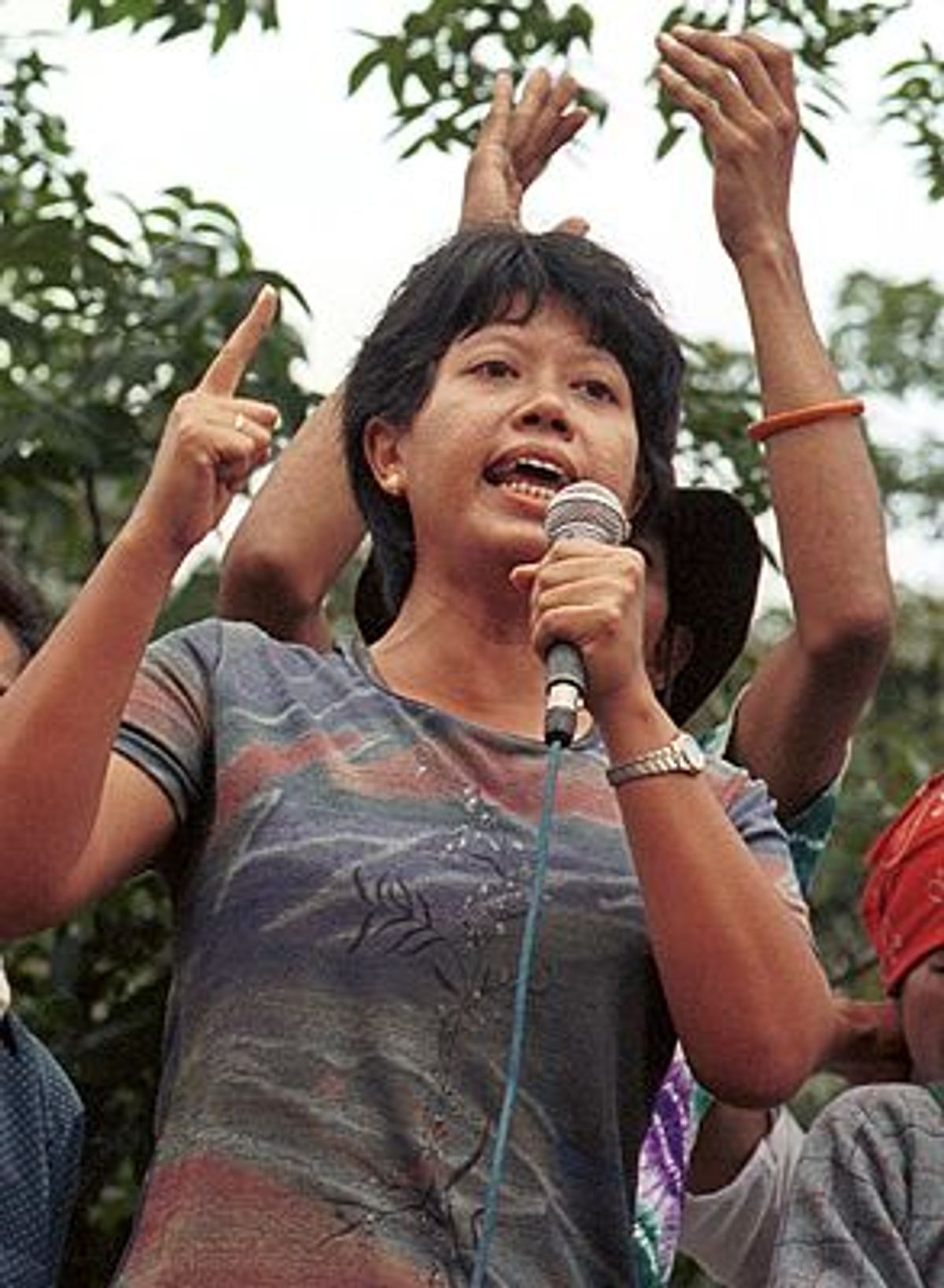 Dita Sari doesn't fit the corporate stereotype of the anti-globalization activist running naked through the barricades at the WTO, raving about anarchy and calling for death to capitalists. This 29-year-old Indonesian labor activist's demeanor is gentle, almost schoolmarmish. When she speaks, she slathers the conversation with expressions like "the proletariat" and "the class struggle," but in a tone of voice so demure it's like listening to a nun read from "Das Kapital."

Her room, attached to the offices of the labor union she heads, the 22,000-strong National Front for the Indonesian Workers' Struggle (FNPBI), is furnished with a woven rattan sleeping mat, a CD player (she likes Enya), a worn-out Snoopy doll and piles of books -- everything from Kahlil Gibran to Danielle Steel to Fidel Castro's "Capitalism in Crisis." It's this combination of the sweet and the strident, the simple and the dead serious, that has helped make Dita a brand-builder's nightmare.

In January 2002, Dita was named a winner of the annual Reebok Human Rights Award for organizing Indonesian workers into the country's first independent union. She and three other women activists were invited to Salt Lake City to accept $50,000 prizes at the hands of Robert Redford, Desmond Tutu, Kerry Kennedy Cuomo and Katie Holmes of "Dawson's Creek" as part of the cultural festivities accompanying the Winter Olympics. To Dita, this was big money. The average Indonesian factory laborer would have to work for 69 years to earn $50,000 -- although the average life expectancy is only 67. But a week before she was scheduled to appear -- the plane ticket had already been booked -- Dita publicly declined the award.

How did this diminutive, soft-spoken woman end up sucker-punching a corporate giant and its human rights campaign? And why did she refuse the award of a lifetime -- at the very least, an award that could have provided years of funding for her activism? It seems that Reebok failed to calculate just what Dita Sari stands for.

Reebok's official response to Dita's decision was terse. In a press release issued on Feb. 4, Reebok wrote: "Dita Sari, the Indonesian labor rights activist who was one of the four women scheduled to receive the 2002 Reebok Human Rights Award, informed Reebok suddenly last week that she has withdrawn her acceptance of this year's Award. Dita Sari has decided that it would be inappropriate to accept an award from a corporation which is producing products globally." The in-between-the-lines jabs were not hard to spot. A fickle woman subject to sudden changes of heart, one who probably believes McNuggets are responsible for Third World infant malnutrition and that Bill Gates III in ASCII code adds up to 666. You get it: She's one of them.

But Dita's story is not that simple. Born into a middle-class family where, she says, "nothing interesting ever happened," Dita went to the University of Indonesia in Jakarta with the intention of becoming a lawyer. She soon found herself on the other side of the law. In 1994, at the age of 21, she founded a union and began organizing workers' demonstrations -- despite a ban by then-President Suharto's authoritarian government on independent labor unions, political parties and strikes. At the time, foreign investment was all the rage, drawn by Indonesia's cheap labor pool and the willingness of state security forces to take uncompromising action against workers who protested wage or safety violations. Reebok was one of many multinationals eager to seize the opportunity.

On July 8, 1996, Dita and some friends from the People's Democratic Party (PRD), an unofficial left-wing organization highly critical of Suharto's government, organized their biggest demonstration ever in Surabaya, Indonesia's second-largest industrial center. Twenty thousand factory workers called for wage raises, the right to organize freely and a halt to military intervention in labor disputes. The event was broken up by army and marine personnel, and the leaders were arrested. "They whacked people until they bled, then threw them in the back of trucks and took them to the police station," Dita said. She was charged with "provocation" and "discrediting the legitimate government" under an archaic statute dating back to Dutch colonial days.

Dita -- laughing bitterly in hindsight -- recalled how she was certain she would soon be released. The year before she had led a strike on PT Reebok, a Reebok producer whose mostly female workers were being paid less than $1.50 a day. The strike had been put down by the police, who beat and arrested Dita but quickly let her go. This time, however, something even hotter was brewing. On July 27, mobs attacked the Jakarta headquarters of the Indonesian Democratic Party (PDI). At the time, the PDI was one of two officially permitted opposition parties, its leader the popular Megawati Sukarnoputri, now Indonesia's president. In a classic divide-and-conquer move, the government accused the PRD of masterminding the attack, which left more than 50 of Megawati's followers dead, despite evidence that the military had in fact encouraged the rioters. The PRD was demonized by officials as a "communist" organization intent on overthrowing the government, and Dita's charge was upgraded to "subversion" -- carrying a maximum penalty of death.

Dita spent the first few months of her incarceration as the only woman in a criminal facility. She said she survived the harsh conditions -- barely edible food, no blankets, no clocks, no radios, no reading materials and, for women, no maxi pads -- with the help of other inmates. "The prisoners had read about me in the papers. They had this picture of me, 'she's different from the rest of us. She's not in for narcotics, she's not a killer, she's not a chicken stealer or a brawler.' They brought me food at night so I wouldn't have to live on the rations."

Dita received a six-year sentence after her April 1997 trial, and was moved to a mixed-sex prison where she soon helped inmates organize a protest against "rubber-like meat and the extortion and harassment of visitors." The protest culminated in the inmates setting fire to the prison and the guards stripping the women to their underwear and beating them one by one. Dita was accused of inciting the riot and put under special guard. The only times she was allowed outside the walls were for a 45-minute visit to her mother's deathbed and a trip to the hospital after she contracted typhoid, a disease spread by fecal-oral contamination, from the prison food. She was finally pardoned in July 1999 by B.J. Habibie, Suharto's successor.

Dita explained that, given this history, her rejection of Reebok was far from sudden. "In 1997 they kept asking for my C.V.," she says, noting that a fellow human rights activist visited her repeatedly in jail to ask for her personal data. "He said it was for the Nobel prize," Dita recalled. "It turned out it was for Reebok. But nobody gave him the data because back then everyone who knew me was too disoriented, they were in hiding underground. There was nobody to organize that Nobel kind of stuff. For what, anyway? Even my father was working really hard at it, saying, 'Dita, Reebok wants to give you $10,000, where's your photo, where's this and that?' I told him, 'Oh, forget about it, Papi.'"

Despite Dita's seeming lack of interest, Reebok continued to keep its eye on her. In January 1999, after Dita's cause had been picked up by Amnesty International and Human Rights Watch, Reebok's CEO, Paul Fireman, wrote a letter to Habibie requesting Dita's unconditional release from prison. In an interview with the Asian Wall Street Journal, Fireman said, "I did it because Ms. Dita Sari's imprisonment made it difficult for Reebok to honor our commitment to respect the human rights, including the right to organize, of the nearly 30,000 workers in Indonesia who produce our footwear. ... The Indonesian workers who produce Reebok products cannot truly be free to organize and bargain collectively while their representatives are imprisoned or the subject of government harassment."

Dita laughs now at the mention of the letter, saying that Reebok knew full well what kind of country it was operating in when it first opened its factories.

When Dita heard about the Human Rights Award in December 2001, her first response was that she should take the money and divide it among Reebok workers and use her time on the Salt Lake City podium to speak out against the company's labor practices. But after being informed that there was a series of P.R. events scheduled for the days before the awards ceremony, she wrote to Reebok and declined. "I said to Reebok, 'We know how you treat your workers in the Third World. I know because I helped organize them and carried out actions with them. We know you once paid your workers less than a dollar a day when your sneakers were selling for a hundred and that you rented the police to destroy us. Understanding this, we feel that it isn't appropriate for you to put the lid on the wrongs you've committed toward workers by giving this kind of award.'"

Dita had a point. In the mid-1990s, as the anti-sweatshop campaign was blasting industry leader Nike for its treatment of Third World workers, Reebok began to rebrand itself as the sneaker with a heart. In 1999 Reebok announced it would begin paying Indonesian workers 24.3 percent above the legal minimum wage. It also released a lengthy report by a consultancy firm that criticized conditions in Reebok-producing factories, promising improvements.

But despite all this, the contrast between Reebok corporate health and its Indonesian workers' well-being has become more pronounced, not less. Paul Fireman is one of the highest-paid corporate executives in America, earning an estimated $3.2 million in 2000. His house is worth approximately $12 million and his yacht, Solemates, another $35 million. (If he sold just the yacht and bought a Honda 125cc motorbike, which is what Dita drives, he could pay his entire Indonesian workforce of 30,000 over a year's worth of wages.) And although Reebok had a few bad years in the '90s, its stock has gone up 400 percent since January 2000, and in 2001 it posted a 27 percent rise in net income. Meanwhile, most Indonesian workers have experienced a drop in their standard of living. When Dita was arrested and beaten for leading a strike against Reebok, its workers were making around $36 a month. Now they're making around $75, but the price of basic goods has almost tripled. It's doubtful that Paul Fireman can imagine, while soaking up the sun from the deck of his yacht, what it would be like to pay half a day's wages for a bottle of kids cough syrup.

Why Reebok would want Dita Sari onboard its human rights campaign train is easy enough to answer: She makes for good brand. She may not be Venus Williams, whose new endorsement contract with Reebok is reportedly worth $40 million over five years. But she adds a bit of activist clout to Reebok's competition against sweatshop villain Nike.

Why, though, would Reebok give an award to someone who showed no signs of wanting one? Did the company really not know Dita's track record on Reebok? It's not talking. Maybe it has come to believe its own hype, or maybe it figured that just like its thousands of Indonesian workers, who stitch and glue sports shoes because a less than living wage is better than nothing, Dita Sari would be willing to play along for the prestige -- and for the money.

But $50,000 represents a lifetime of sweat for most Indonesians. And Dita Sari knows it.

Leslie Dwyer is a cultural anthropologist who lives in Indonesia. Additional reporting for this story was conducted by Ayu Ratih.