Democrats want to make the homeland security czar talk to Congress. But after six months of losing turf wars to John Ashcroft, does the marginalized Ridge have anything to say? 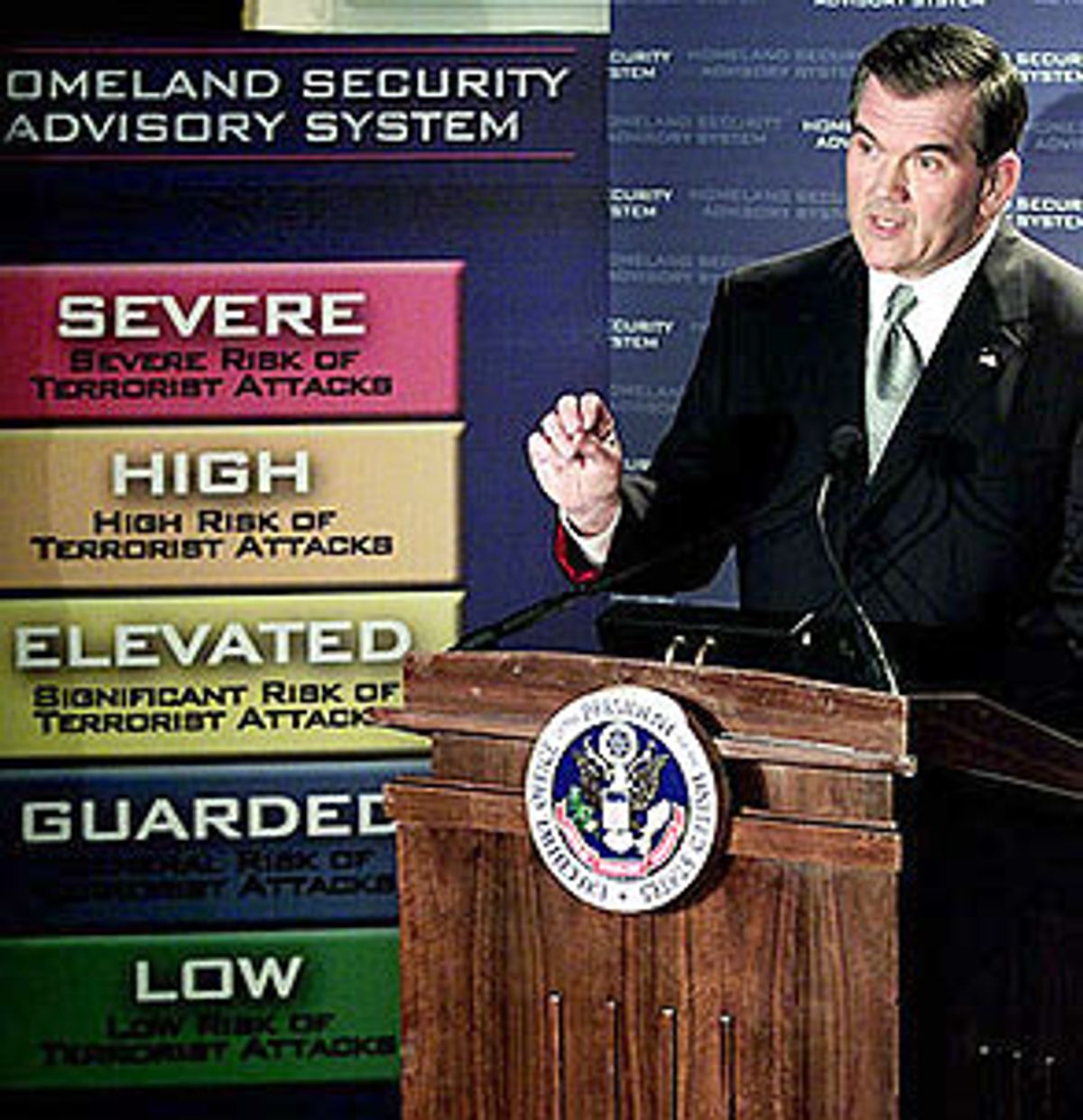 Congressional Democrats and homeland security director Tom Ridge are vying to see who can most exaggerate the importance of their spat over whether Ridge should have to testify on Capitol Hill. Sen. Robert Byrd, D-W.Va., insists that the president's refusal to let Ridge testify is part of a plan to create a "shadow cabinet" operating beyond congressional oversight, while Ridge himself told ABC's "This Week" that his testifying before Congress would violate the constitutional separation of powers. Since almost every sort of executive official -- including one sitting president -- has testified before Congress at one time or another, Ridge's claim seems ridiculously self-important.

The White House, for its part, insists that Ridge is just a presidential advisor, with no department or budget, who should not be forced to testify before congressional committees. And this time, the White House is telling the truth: Ridge really is just an advisor with little say about budgetary matters or what goes on in the various homeland security-related departments. And that's the problem. He was supposed to be much more.

Ridge is so marginal, sources say, that he wasn't even consulted when the Pentagon decided this month to stop round-the-clock fighter-jet patrols over New York City, to the chagrin of New York's political leaders. He has clashed with Attorney General John Ashcroft, and lost, on several occasions. In fact, the White House hasn't seemed to miss an opportunity to remind Ridge how little control and influence he has, in the almost six months since President Bush appointed him homeland security czar.

"The department heads are trying to squish Ridge," says Ivo Daalder, a former Clinton NSC official and senior fellow at the Brookings Institution, who's been closely following the government's post 9/11 homeland security efforts. And if Ridge and the president don't shift gears soon, Daalder believes they'll succeed. "He hasn't lost the fight yet. But somebody on the president's staff has to tell him that if he doesn't save Ridge, his ability to craft an overall strategy on homeland defense will be seriously undermined."

From the moment Bush created Ridge's office Oct. 8, critics have warned that this would happen. The Homeland Security Office was no doubt created with the best of intentions: to begin to coordinate the work of the multiple agencies with jurisdiction over domestic security issues, from the FBI, CIA and the Pentagon, to the INS, the Coast Guard, Customs Service, Border Patrol, FEMA and the nation's public health infrastructure. Ridge was supposed to make sure these agencies worked together with a minimum of infighting and overlap, and create a central authority capable of watching the big picture, which officials in the various agencies and departments might miss. But without budgetary authority or a statutory authorization for his impromptu "office," critics predicted, Ridge's every effort would be at the mercy of turf-conscious bureaucrats and recalcitrant Cabinet secretaries, no matter how close a relationship he might have with the president.

And that seems to be precisely what's happening. Even though he is supposed to have the president's ear, Ridge seems either unable or unwilling to use that clout. "Tom's power exists not in a formal organizational sense but because [people] believe that they need him, because [he can] get other departments to do their bidding," says Daalder. "If he can't deliver the president, he's gotta go back to Pennsylvania."

Most Americans know Tom Ridge best for the color-coded "Homeland Security Advisory System" he announced two weeks ago -- a graduated system of terror alerts that immediately became the object of ridicule on Capitol Hill and the butt of jokes for late-night comedians. But there have also been a series of incidents in which Ridge has either been rolled or snubbed by senior officials in other departments. One of the most recent homeland security dust-ups came on March 18, when the New York Times reported that the administration had decided to end round-the-clock fighter jet patrols over New York City. Whether or not the ongoing over-flights were doing any good, New York politicians took umbrage at the fact that the patrols were being ended without their being notified or consulted in advance. They in turn complained to Ridge.

But Ridge seems to have been as out of the loop as they were. According to one senior Pentagon official, Ridge was not even consulted about the decision to suspend the fighter patrols. "He's just an advisor to the president," the Pentagon official told Salon late last week. "He was not part of the decision-making process. Authority flows from NORAD [the North American Aerospace Defense Command] to Rumsfeld to the president. The only thing [Ridge] gets is information copies. Nobody wants him in the chain of command."

Ridge's spokesman Gordon Johndroe disagrees. "It sounds like someone [at the Pentagon] has some sort of ax to grind for no particular reason," Johndroe told Salon Monday morning. Johndroe says that no decision about the fighter patrols has actually been made and that the Homeland Security Council does receive regular briefings on military matters, including one from NORAD about the combat air-patrol program. When asked whether the NORAD briefing had come before or after the Times article appeared, Johndroe said that he believed it was before the Times report but was not sure.

If Ridge is having problems getting respect at the Department of Defense, he's having even bigger problems with the Department of Justice. Since the attorney general is the nation's top law enforcement official, it's only natural that there would be some tension between the attorney general and the director of homeland security. But Justice seems to be winning the turf wars at Ridge's expense.

One sign of strained relations between Ridge's shop and Ashcroft's Justice Department came last January, in the run-up to the Salt Lake City Olympics. On Jan. 10, Ridge toured the Olympic venue with Utah's senior Sen. Orrin Hatch and gave the security arrangements a rousing thumbs-up. Ridge told NBC's "Today Show" that security officials had "done everything humanly and technologically possible" to guard against every possible threat to the Games' security. But a week later Ashcroft made his own tour of the site with Hatch and decided that security arrangements weren't so top-flight after all. After a five-day inspection of security preparations, Ashcroft announced that quite a bit still needed to be done and ordered a series of last-minute security upgrades. Though the White House officials tried to paper over the dispute, this was at best an embarrassing breakdown in communication and at worst an effort on Ashcroft's part to show Ridge who is boss.

A more substantive dispute has arisen recently over border security. For months Ridge has been pushing behind the scenes for a major reorganization of the various agencies that protect the security of the nation's borders. Ridge advocated taking the border patrol functions of the INS, the Customs Service, the Coast Guard and several other government agencies and combining them into a single agency that would answer directly to the president. The key was that it would be an independent agency, giving sole priority to protecting the nation's borders, and not simply one more fiefdom in a sprawling executive department like Treasury or Justice. But Ridge's plan was going nowhere.

What changed the balance was the recent humiliation suffered by the INS, when an agency contractor sent out student visas to two of the now-deceased perpetrators of the Sept. 11 attacks. What's revealing, though, is that even this embarrassment didn't improve Ridge's efficacy. Predictably, the security czar used the opportunity to press for his plan. But again he got rolled. This time publicly, by Ashcroft and the Justice Department. At a recent meeting of the Homeland Security Council, President Bush provisionally accepted Ashcroft's plan, which would merely take Customs out of Treasury and put it with INS under Justice.

This back and forth of agency insiderdom can be confusing. But the upshot is that Ridge's plan to create a newly empowered, independent agency to secure the nation's borders got shot down in favor of a minor redrawing of the lines of authority between Justice and the Treasury, in which the former got the better of the latter.

Johndroe refused to discuss which of the president's advisors and Cabinet secretaries supported which plan, saying only that the plan the president supported was the "consensus" recommendation of the Homeland Security Council. But the conclusion seems obvious: Ridge publicly went up against Ashcroft and lost. And according to Daalder, that's not just a loss for Ridge, but a setback for the whole effort to revamp American anti-terrorism efforts.

"If [Ridge] goes to the mat on an issue he's got to win," says Daalder. "Did he go to the president and have the president [deny him]? If that happened, it's a big problem. More likely is that he never played his ace. He caved. And in fact, that's the same thing."

On the military front, President Bush's war against terrorism has been mostly successful. And with the exception of last fall's anthrax scare (which likely had domestic origins), the nation has been blessedly free of further terrorist attacks since Sept. 11. But Tom Ridge's Office of Homeland Security, born amid such grand hopes only six months ago, looks to be in serious risk of becoming a bureaucratic irrelevancy.

Maybe that's why the White House doesn't want him on Capitol Hill.