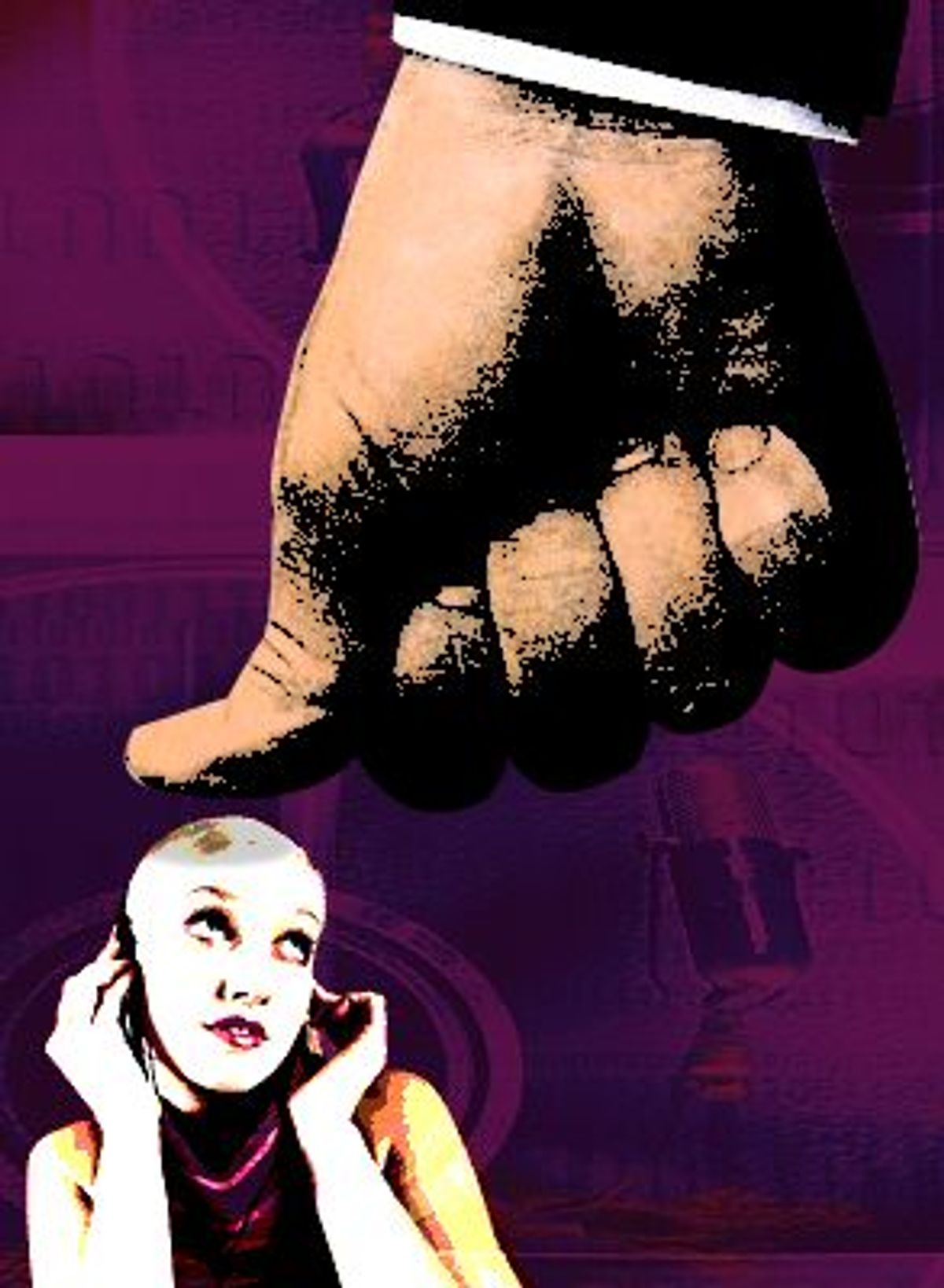 SomaFM is the kind of Internet-only radio station that offers a true alternative to the mainstream fare on the offline dial. About 20,000 listeners a day tune in to the URL to groove to the streams of ambient down-tempo electronica. In the mix: the Chemical Brothers, Mama Gravy, old Moby and obscure new discoveries like the German band Electroslide.

The San Francisco-based station, which began as a pirate radio operation in 1996 at the Burning Man festival, has been continuously broadcasting online for about two years. It runs completely on donations -- about $1,000 a month, plus some bandwidth -- from listeners.

But a new ruling under the Digital Millennium Copyright Act threatens to change the playlist at SomaFM and other stations like it, if not actually shut them down altogether.

The Copyright Arbitration Royalty Panel, a body appointed by the U.S. Copyright Office, ruled on Feb. 20 that under the DMCA, radio stations must pay a fraction of a cent per song, per listener, for every song they stream. Under the CARP ruling, Internet-only radio stations would pay a royalty fee of 14/100 of a cent per song, per listener, retroactively through October 1998. Webcasters are up in arms -- while they are not opposed to the principle of royalty fees, they say the rate structure is far out of balance to the economics of these tiny, often one-person operations.

In recent weeks, webcasters have started a Save Internet Radio campaign to try to amend the DMCA so they can stay on the Internet airwaves.

Rusty Hodge, the program director and general manager of SomaFM, spoke to Salon from his day job at a Web health insurance company to explain how the ruling will likely affect stations like his and what he's doing to fight it.

What fees were you already paying to play the music you air?

We pay ASCAP and BMI fees. Those are the fees that go to the authors of the songs. For a noncommercial station, like us, they're about $600 a year. It depends on how much traffic you get. This year, we're going to be paying close to $1,000. It's comparable to what a college radio station would pay. If you play back music, like in a restaurant or a nightclub, you have to pay those fees.

How will that change under the CARP ruling?

The new fees would be in addition to the ASCAP and BMI fees. We did some rough calculations and found that it would cost us under the terms of that ruling about $1,000 a day.

The problem with the CARP ruling is that everybody assumed that it would be kind of like the BMI and ASCAP fees were; [that] the fees would be reasonable. We figured for noncommercial broadcasters it would be like $1,000 or $2,000 a year, and while it would hurt some of the really, really small little guys, the more serious little guys -- like us, who have a community supporting them -- would still be viable.

Is there any way to avoid the fee?

There are a couple of things we'll do. Right now, we play mostly material that's on small independent record labels or artists that don't have record contracts in place. That's about half the music we play; the other half of the music is on more significant record labels, although it gets confusing to see what is on the top five record labels, because they've been acquiring a lot of smaller labels.

What the CARP ruling affects is what is known as the DMCA compulsory license, meaning that the copyright holders have to give it to you if you pay this amount. They can't selectively say: "You can't broadcast this on your radio station." So, as long as you pay these fees, you can play any material. The CARP ruling concerns what the cost is to play back copyrighted materials, if you sign this compulsory license agreement, which we actually did not sign.

Without that you have to negotiate deals separately with all the copyright holders. That's what we're doing. With about two-thirds of the music we play, we have asked permission from the copyright holders -- the smaller labels or independent artists themselves -- to play it on the air. The other third of the music, it's been hard to reach the people, and so we haven't asked, or we've asked and we've heard nothing back.

So, contacting the record labels and artists themselves is your other option?

That is a way out of it. But the problem with that is that the law is very vague about this. For example, I can go to someone and I can get permission from them to play their songs, but then they will go and sell the rights to their music to a major record label who will come back and say: "We didn't give you permission to play the songs."

You have to have a very detailed legal agreement with them, which isn't going to happen. Small record companies aren't going to sign a five-page legal agreement that defines them giving you rights to play their song in perpetuity. Quite often, they know that a lot of their money will be made when a major label comes to them in the future and says: "We want to buy the rights to this album."

In the early days when we had so many people coming to us asking us to play their music, a lot of it was from the underground music scene; it was kind of like an unspoken thing that everyone wanted as much exposure of their music as possible. A lot of them we had unspoken agreements with.

What stage is the ruling at now?

The DMCA is what makes CARP happen. So, the legislation is already in effect. But the CARP rulings just recently happened less than a month ago. It still has an approval phase to go through, but generally it's thought that the Copyright Office will approve whatever the recommendation is.

What do you think the effect is going to be on some of the smaller stations?

Well, now, when the fees suddenly go up to $350,000 a year or more, then it means basically that there's no way that a lot of stations can continue broadcasting. Their alternative is to move to start playing music purely by just unsigned artists.

Do you think that the Recording Industry Association of America is going to come after these tiny stations, run out of someone's bedroom, and actually try to enforce this?

It will probably be kind of like the way they've gone after people who have done pirate MP3 sites. If they're really small and they have a really small audience, the RIAA probably won't notice them. The ones that are going to get hurt the most are the ones that have an average audience of more than 100 people or so.

Already on the mailing lists that I'm on with a lot of other broadcasters, a lot of them just say: "Well, forget it. I'm shutting my station down. I can't risk any of this." I know of four or five smaller stations that have already shut down just out of fear right now.

What do you think the Save Internet Radio campaign can accomplish? Do you think that it can do anything, or is it already too late?

We realize that going after CARP is the wrong thing. That's like going after the punishment, when really what you have to do is go after the original law that put this in place. The DMCA dates from back in the late '90s, when the mind-set was, "Oh, it's digital, it means a perfect copy of something."

Congress didn't really think about how streaming audio broadcasts are using compressed audio and that they do not sound as good as the original CD. Streaming is not a way of actually distributing recorded music. And that's what the RIAA and the other copyright owners were concerned about when they were pushing for the passage of the DMCA. They were all scared that people would be able to distribute perfect copies of their sound recordings.

The key phrase there is "perfect copies." [The DMCA] talks about how digital allows "perfect copies" of an original. And therefore they had to be taxed or there had to be a royalty at a very high price, because these perfect copies would be taking away from record company sales.

But the truth is that with Internet radio, while the sound quality is good, in most cases, it's not as good as the FM broadcast. And in some cases when it is as good as an FM broadcast, we all know that an FM radio doesn't sound nearly as good as listening to the original CD.

So, you guys see this money as going to the record companies, not to the artists?

Yes. The ASCAP and BMI fees go to the artists, but the fees that CARP deals with go to the record companies.

What kind of fee do you think would be fair?

I think that it would be comparable to the BMI and ASCAP fees.

Do you think that these new fees will force indie Net radio stations to go more commercial with subscriptions or advertising or go underground, or do you just think they will shut down?

We think that some will go much more commercial, but then you play only the music the record companies want you to play. The record companies want to push a very limited number of records. They get like 90 percent of their revenue from probably less than 10 percent of the music that's out there. So, they would want to see Webcasters pushing the stuff that they want to push, and not all this other stuff, because they don't think that they're going to make as much money on the small independent artists.

The other direction that the independent stations could go is to start playing music by truly independent artists who are not affiliated with record labels, and that's what a lot of them have said that they'll start doing.

The only problem with that is that overall the quality of music goes down, and you're going to lose a lot of the audience. A real successful independent station will play a lot of obscure upcoming artists or unreleased artists on minor labels, but also mix in some stuff from some of the bigger labels.

I understand that you're making a big effort to separate this case from the Napster debate. What impact has the Napster case had on Internet radio?

The problem with Napster is that people think that Internet radio is just another way to get music for free. And, you know, in some ways it is. Some people who listen to the radio never, ever buy music, but I probably get like 20 e-mails a day from people trying to track down records that are hard to find.

And I've gotten other e-mails from people who say, "Oh my God! Since I've listened to your station, I've bought like 60 records. It's all this new stuff that I never knew existed before. Thank you for introducing me to it." It's not like people are coming to us to get music so they don't have to buy CDs. The core of our audience is people who are looking to discover new music.

Do you think that the whole Napster debate has made it more difficult to argue for the legitimacy of Internet radio?

Yeah, because Napster has sort of equated Internet music with stealing music. We just want to be treated as over-the-air broadcasters are treated.