Photographer David Bailey's sexy past work haunts nearly every shot on display in his new collection. 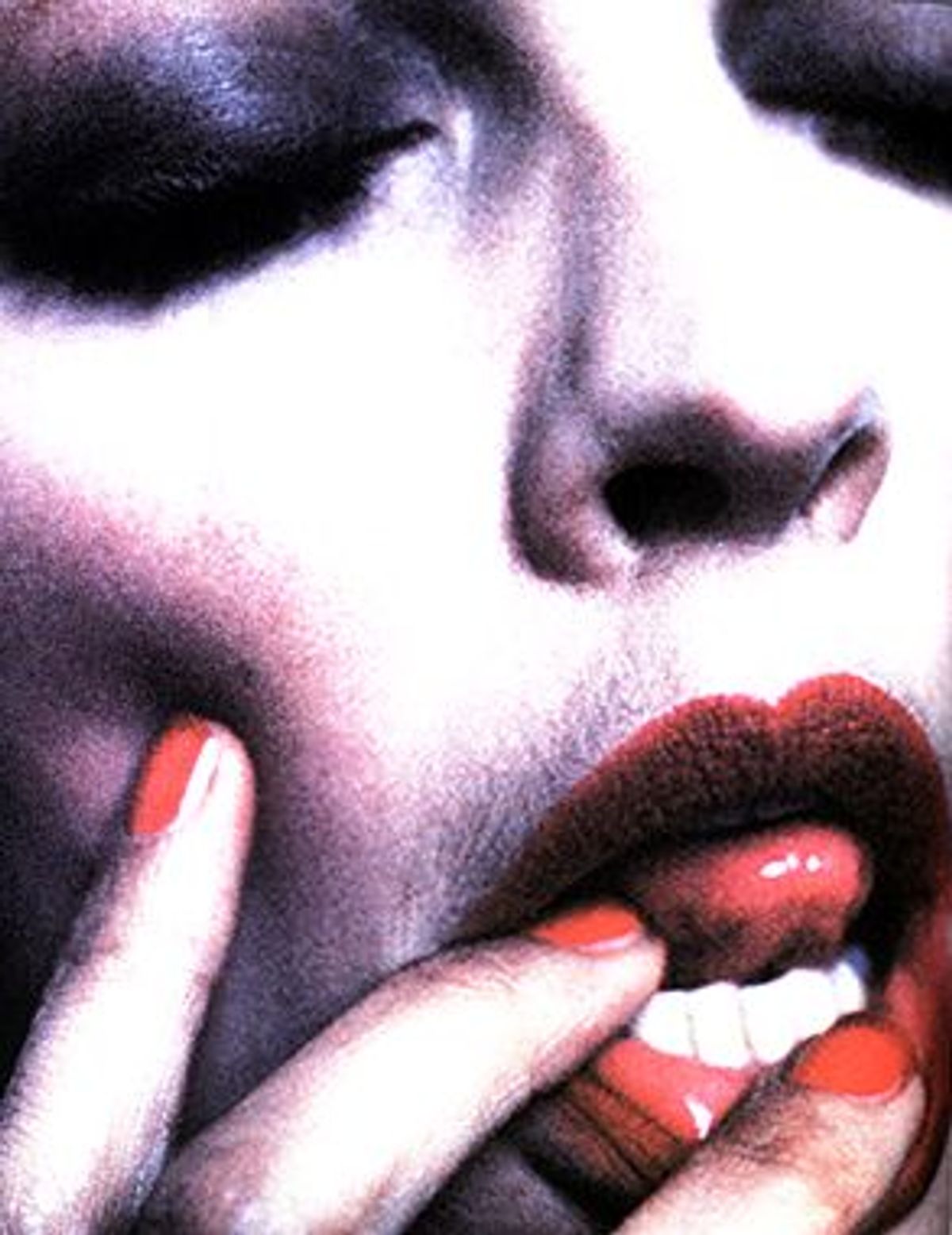 There are more breasts and buttocks in David Bailey's new collection of photos "Chasing Rainbows" than in almost any of the other collections of his work. Partly that's because this is later work, from the '70s to the '90s, and Bailey was dealing with less restrictive editorial policies at the magazines for which he shot. Why, then, is this -- with a few blessed exceptions -- the unsexiest work Bailey has ever done? The answer is that Bailey's sexy past work haunts nearly every shot on display here.

"David Bailey is part of the mythology of the 1960s," writes Robin Muir in the introduction to "Chasing Rainbows," "and any serious scrutiny of his career must first of all disengage him from that mythology." Fat chance. How do you disengage someone from the time in which their best work was done? Other visual artists have moved beyond their identification with that decade. Nobody thinks of David Hockney as a '60s artist, though that's the decade in which he emerged (and with his schoolboy caps, striped shirts and blunt-end knit ties, looked so much a part of).

Bailey, who has worked steadily since the '60s, remains the fetishizing eye of Swinging London, forever associated with his photos of Jean Shrimpton and Penelope Tree and mythologized by David Hemmings in Michelangelo Antonioni's "Blow-Up." In our heads he never escaped the decade.

It's not such a bad heritage to claim. Much of Muir's commentary in "Chasing Rainbows" takes care to establish how Bailey's fashion photography -- black-and-white, hard-edged, a glamour industry appropriation of the verité-style filming of the French New Wave and the "kitchen sink" realism of early '60s British cinema -- made a decisive break with what fashion photography, epitomized by British Vogue, had been until then. Muir quotes director and critic Jonathan Miller, who spoke of Vogue promising "elegant corruption: a whiff of Beardsley," only to deliver "gentility." Miller was referring to the formal poses in the fashion photography of the time. Bailey, an East End cockney, said he didn't have his head in a cloud of pink chiffon, but was suited to the job of fashion photographer nonetheless because "I loved to look at all women."

The collection of Bailey photos in the 1999 book "Birth of the Cool," its text by fashion photography historian Martin Harrison, tells the story. Working out of an interest in photojournalism, and likely influenced by the London photos of Bill Brandt, Bailey broke with the tradition of glamour photography epitomized by photographers like Louise Dahl-Wolfe, Horst and George Hoynigen-Huene. He had more in common with the "realism" in the photos of William Klein or Frank Horvat or his contemporary Terence Donovan.

Bailey was lucky enough to work with models like Sue Murray, Pauline Stone and the woman who would be his greatest muse (and girlfriend), the exquisite Jean Shrimpton. For a 1962 Vogue series called "New York: Young Idea Goes West," Bailey shot Shrimpton in Manhattan crowds, in a phone booth, waiting for a walk sign. In all the shots, she is a slim, calm center in the midst of the surrounding grit and movement. The photos both emphasized and celebrated the artificiality of fashion.

"Birth of the Cool" makes a strong case for Bailey as a portraitist as well, of people and places. There are stark, unpopulated shots of the about-to-vanish East End of London (the area was designated for a major postwar architectural "upgrade") that, while they lack traces of life, bear some relation to Bill Brandt's '30s shots of working-class England. The shots of luminaries (including Brandt himself) encompass not just the pop figures of the era -- Marianne Faithfull, Mick Jagger, the notorious Kray brothers -- but actors and directors and writers like Terence Stamp, Peter Ustinov, John Huston, Rita Tushingham, Julie Christie and Arnold Wesker. They are seen in sometimes startling isolation, bringing their public personas into relief.

Sometimes the sides of the frames are visible, as they are in the work of Richard Avedon. But unlike Avedon, Bailey doesn't pin his subjects like funhouse-mirror butterflies. Even at their most exaggerated -- particularly in the photos of David Frost and Barry Humphries -- the only comment seems to come from the subjects themselves, not Bailey's preset idea of them.

Anyone who focuses so freely on glamour and celebrity, regardless of the quality of his work, is setting himself up for the fuddy-duddies. Reviewing one of Bailey's first collections of photos, that virtuous drone Malcolm Muggeridge characterized it as a "large mixture of show-business candy floss" and wished Bailey had included "worthy" subjects, like that old fraud Mother Teresa (for whom Muggeridge provided more than his share of fawning PR).

Another, more sophisticated fuddy-duddy took his shot, too. Bailey has always been named as the obvious model for the photographer played by David Hemmings in Antonioni's wildly acclaimed view of Swinging London, "Blow-Up." It's safe to say that without that historical connection and its archival interest, this truly crummy movie would have long ago been forgotten. Forget the fact that Antonioni bungles what could have been an entertaining murder mystery in favor of soppy metaphysics; he brings what can only be described as a hick's view to his subject.

"Blow-Up" is a Sunday sermon directed at the very thing it's been admired for celebrating. Antonioni views the available girls and drugs, the clothes and parties, as symptoms of the same damn ennui and malaise he'd been opaquely bleating about for years. To most of the rest of us, it looks pretty fun. (How can you not smile when Veruschka announces, "I am Paris"?) You wished someone in charge would have said to the director, "I can see you're not enjoying the party, Michelangelo. Why you don't run along home and I'll stay."

But if Bailey's photos of the '60s are celebratory, they are not mindlessly so. They convey the thrill of someone who found himself in the right place at the right time, who dug the scene and the personalities. There may be no realization on Bailey's part, as Greil Marcus charged at the end of the decade, that the party was crashing to a close (which is a way of saying it was a view of the era divorced from politics). Bailey's view may have been, to use George Melly's phrase, "revolt into style," but what style. I don't see why we should deny ourselves the surface pleasures artists can bring us, and I appreciate Bailey's '60s work as a keepsake of the pop moments of that era.

It's hard, though, with that work in mind, to accept the work in "Chasing Rainbows." Focusing on Bailey's work from the '70s and '80s, all in color, the book is the work of a man recording the fashion of the moment but not connecting with it as he had in the '60s. And he fails to bring as forceful a personality to the work.

The photos in "Chasing Rainbows" are gauzy, artfully out of focus or distressed with raised grain. Some of it is undeniably lovely -- much of it from a 1983 calendar for Lamb's Navy Rum. In these shots, Bailey's wife, Catherine, and Lorraine Coe are posed like South Sea maidens, with sarongs and exotic flowers in their hair; Bailey is seen in a makeshift canoe off the shore of a desert isle; Coe stands in the clear blue water and wears a pair of fish around her neck like a bikini top. These shots delight in the sun and sand and sea; they make those textures palpable on the models' skin. They exude a slowly spreading warmth that has as much to do with the setting as with the subjects. Those photos have the charge of lazy erotic fantasy.

The two color photos of Jean Shrimpton from 1963 are engaged in the manner of his best work. They stand out. "Chasing Rainbows," which offers a much broader array of styles than any other Bailey collection -- colorful and diffused where his most characteristic work is black-and-white and stark -- still feels cold and impersonal, the work of a hipster trying to fit into a scene that he gets, but doesn't like. At times -- as in a shot of model Kim Harris leaning against a Dapper Dan in evening dress, or Marie Helvin in hot pants and open cowboy shirt standing in a pool embraced by two boozing sailors, or posing with a sex doll and the words "Viva la Punk" scrawled across her breast, or Harris and Helvin in eye patches -- Bailey seems out to ape the continental decadence of Helmut Newton. But this faux bitch-elegance doesn't suit him. There's an implied grin in Newton's perversities -- he's less a decadent than a schoolboy tittering over de Sade (you can see Newton's doughy grin in a shot where he holds Jerry Hall's shoe on the beach at Cannes). Bailey hasn't made this created world of glamour his own. Cold, continental gaucherie fits him far less than the streets of London or New York did.

For all the gauziness of these photos, they feel hard, glacial, stopping at the surface without delighting in it, never suggesting what might lie beneath these invented personas, as his portraiture does. There is something angular and metallic about this work, even at its flossiest. It's a drag to see a man who had battled the genteel conventions of glamour photography giving into editorial and commercial clichés: the tuxedoed man swooning in homage to the woman (Anjelica Huston) in evening wear; the woman attended by the fawning Pierrot figure (to see how circus imagery might be done without the mawkishness, take a look at Corinne Day's layout in the April issue of British Vogue); the pale attempt at exoticism in his preoccupation with masks and face paint.

And it's even more of a drag to feel the man who made models like Jean Shrimpton and Penelope Tree (who annoys the hell out of me, but there's no denying her distinctiveness) far more important than the clothes they were wearing erase the personalities of his models here. Helvin and Harris could be anyone. Catherine Bailey comes through a little more strongly, Lorraine Coe, working on the tension between her shapeliness and mop of boyish-cut hair, most strongly of all.

It would be wrong to imply that "Chasing Rainbows" represents the sum total of Bailey's work since the '60s. What is odd about the book is that, for all the splashes of color, for all the freedom Bailey had in creating settings and content, it is a peculiarly detached body of work. The Bailey volume that summed up the '60s was called "Goodbye Baby & Amen." There's no sense in "Chasing Rainbows" that he would be particularly sorry to see anything here pass away.