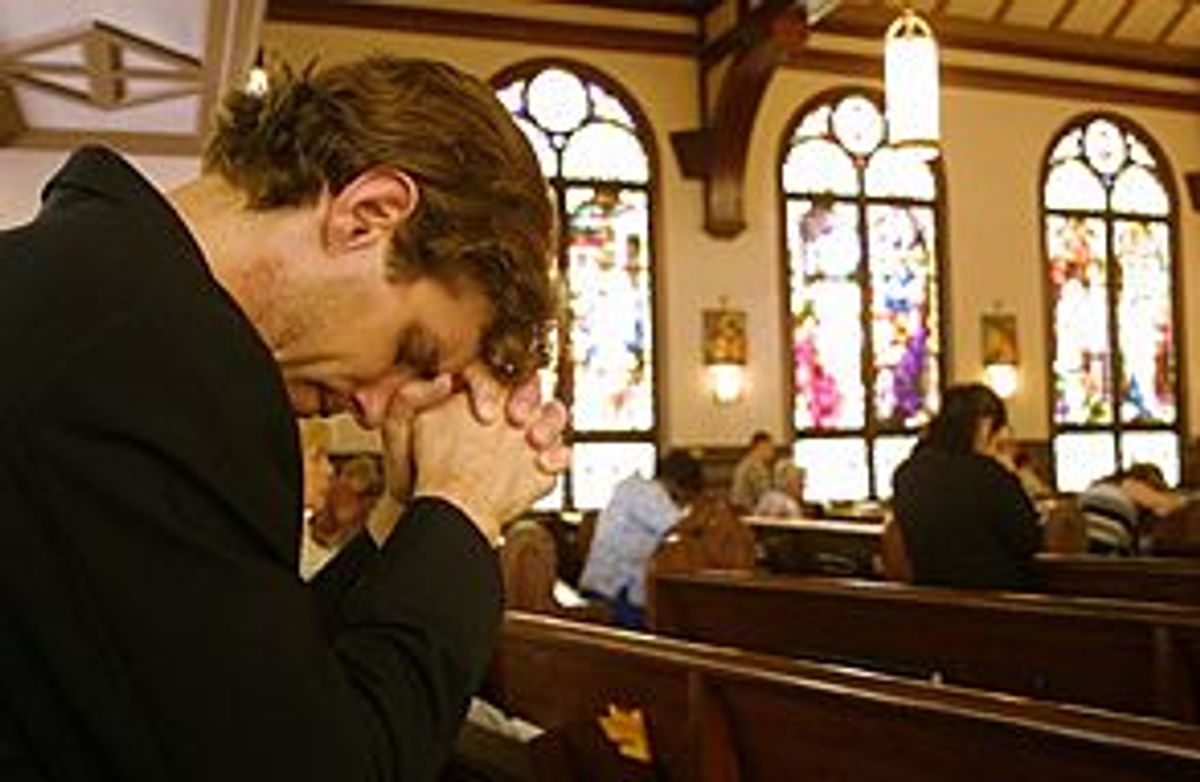 One remarkable fact about the priest sex-abuse scandal is that conservative and liberal Catholics have been united in their anger and sorrow about it. So it was disturbing this week -- during an already sorrowful Holy Week, the sacred seven days leading up to Christ's resurrection on Easter -- to watch some conservatives try to scapegoat liberal Catholics for the church's current crisis.

In Tuesday's Wall Street Journal, Penn State religious studies professor Philip Jenkins blamed the scandal at least partly on the influx of "activist, feminist and gay groups" who supposedly gained power in the church since the 1960s. Not only have those activists fomented the trouble, Jenkins claimed, but now they're trying to take advantage of it. Encouraged by the media, which is itself profiting from "American fascination with clerical scandal" by hyping the priest sex story, Jenkins says, liberal Catholics are using the crisis to push their agenda -- especially their goal of ending the tradition of an all-male, celibate priesthood.

Then on Wednesday, Catholic League president William Donohue went after New York Times columnist Maureen Dowd -- a practicing Catholic who nonetheless has written critically about the church's stonewalling in sex-abuse cases -- lumping her with a cabal of "radical feminists" who have "long hated the Catholic Church."

That's nonsense. Speaking as an official liberal Catholic -- I write for the Jesuit magazine America, and for most Catholics Jesuits are the personification of liberalism (those Berrigan troublemakers were Jesuits, you'll recall) -- I can tell you that liberal Catholics indeed want change. But so do conservatives. Both groups want Catholic leadership held accountable for its responsibility in covering up and thus worsening the priest-sex scandal -- if anything, conservative Catholics have been the loudest critics of Cardinal Bernard Law of Boston and other high-ranking prelates who have covered up clerical crimes.

What liberal Catholics also want -- which no doubt some conservatives want, too -- is what was promised them in the Vatican Council II reforms of the early 1960s: A partnership of equals between clergy and laity. I'm struck by how, instead of alienating them from the church, this scandal has energized liberal Catholics, and made them more determined than ever to remain part of their parish community, to work with other Catholics, regardless of ideology, to find common ground, to right the terrible wrongs and to make the church whole again.

Of course, to many liberal Americans, the phrase "liberal Catholic" may sound like a contradiction -- especially to those who prefer their stereotypes simple and hackneyed. But there are a lot of us: We are active in our parishes, we send our children to Catholic schools and we look to our clergy for spiritual guidance. We've resolved as best we can the disagreements we may have with the church's pronouncements on birth control, divorce, gay rights and the role of women in the church. We prefer to focus on the church's many progressive social teachings, our proof that Catholicism has been and can still be a powerful force for social justice, a tireless voice for the poor and disenfranchised.

It has never been easy to get people to pay attention to the Catholic bishops' pronouncements on military spending (they think it's too high) or foreign aid (they'd like more of it). Sex sells, even, or especially, when the topic is religion, so Americans know more about the church's lamentable opposition to birth control, for instance, than they do about its stalwart defense of labor unions. And we share a frustration with conservative Catholics that sex scandals involving priests are more likely to get our church on the front page of newspapers than any good deed Catholics may do.

But I don't see evidence that liberal Catholics are using the scandal to push their social agenda. Sure, some of us advocate an end to celibacy for priests -- although the Rev. James Martin of the suspiciously liberal Jesuits, writing in the New York Times March 25, successfully explained why celibacy is not the issue. Martin, who is a friend of mine, pointed out that the "criminal acts of a few" do not negate the virtue and sacrifice of celibacy, any more than "spousal abuse or incest can negate the value of marriage or marital love." (It's also worth noting that, while reliable statistics are scarce, there is no evidence that the celibate priesthood is producing more pedophiles than clergy groups in which celibacy is not a requirement.) And while most liberal Catholics probably support ordaining women priests, this is hardly a pressing concern at the moment.

Justice for sex abuse victims, or some form of it, is the immediate priority -- along with preventing these scandals in the future. "Although, as a liberal Catholic, I've yearned for change in the church, I don't want this evil to be exploited," says Pat Byrne, a member of St. Ignatius of Loyola parish in Chestnut Hill, Mass. "We need to make sure this doesn't happen again, and that we make things right for the victims." But Byrne insists she has no intention of leaving an institution she loves and cherishes. In the last month or so, I've talked to dozens of liberal Catholics who, like Byrne, are unwilling to join the ranks of the lapsed. They intend to stay, and rebuild, and to make their voices heard.

And that's what scares people like Jenkins and Donohue. They associate such independence with "activist, feminist and gay" troublemakers. The fact is that conservative voices have joined with those of liberals in demanding change. Columnist John Leo approvingly quoted a Massachusetts woman's contention that lay Catholics are hearing a "call to revolution." One needn't be an "activist" to insist that Catholic bishops stop acting like bureaucrats when they discover molesters in their midst. One needn't be an "activist" to insist that the church's leaders conduct themselves as servants of God, as Catholic tradition regards them. And yet, in a church whose leadership style is very much top-down, such calls for change do, in fact, constitute the makings of a revolution.

I think it is true that liberal Catholics are more willing than conservatives to challenge clerical omnipotence on matters great, like birth control, and small, like the suitability of godparents. "Having blind faith in people in power is never a good idea," Byrne said. Byrne hopes the silver lining of the scandal will be that it leads to the creation of a new church, with a greater role for laypeople.

If liberal Catholics can be distinguished from conservatives in their reaction to the sex scandals, it is that they see it validating their vision of a church in which laypeople have a greater leadership role, the clergy is not omnipotent and where all Catholics can at least discuss their disagreement with church dogma. The Vatican Council II reforms of the early '60s encouraged American Catholics, especially liberals, who hoped they'd usher in a new spirit of inquiry and participation in an ever-evolving church. But after the death of the Council's champion, Pope John XXIII, that promise was never fulfilled. And after his successor, Pope Paul VI, issued his famous papal encyclical reiterating the church's opposition to birth control in 1968, the promise of change seemed permanently broken. Mass attendance and devotion plunged in America, and tens of thousands of Catholics never returned to the fold.

Certainly liberal practicing Catholics want a discussion about the issues that have alienated their lapsed brothers and sisters. The papacy of John Paul II, especially in its twilight years, has been disappointing for liberals, who once hoped this intellectual who bravely challenged communism would lead the church in the collegial fashion that Vatican Council II promised.

But conservative critics see a dark plot behind these demands for more involvement by laity. They think it's a slippery slope toward ending the celibate, male priesthood. The more you have lay folks making decisions and even playing on-altar roles during Mass, as many churches do, the more you seem to validate liberals' assertion that celibate males aren't the only ones who can play a leadership role. Of course, the growing role of laity is an acknowledgment of the reality of parish life, where there's a pressing shortage of priests and nuns (which many experts do believe has something to do with the celibacy requirement -- but that's another story). "The laity have to take up more responsibilities and not defer to a shrinking number of ordained people," Byrne said. "The ordained people have been taking on more and more responsibilities as their numbers decline. How long can they last?"

As recently as 150 years ago -- and in an institution as old as the Catholic Church, 150 years is just yesterday -- some American parishes were run by lay trustees. The pastor reported to them; indeed, the pastor was their employee. Some liberal Catholics would like to see a return to those days. Many conservative Catholics, trained to revere bishops and cardinals as lawgivers rather than merely pastors, surely would oppose such a reform.

But they agree with liberals that something has to change. And liberal Catholics are clear on one thing: They have no intention of letting others dictate those changes.

Terry Golway is the city editor of the New York Observer and is a former Staten Island resident. The son, son-in-law and godson of New York firefighters, he is writing a history of the Fire Department of New York for Basic Books.