Go ahead, laugh at this feebleminded Tim Allen comedy. You'll hate yourself for it tomorrow. 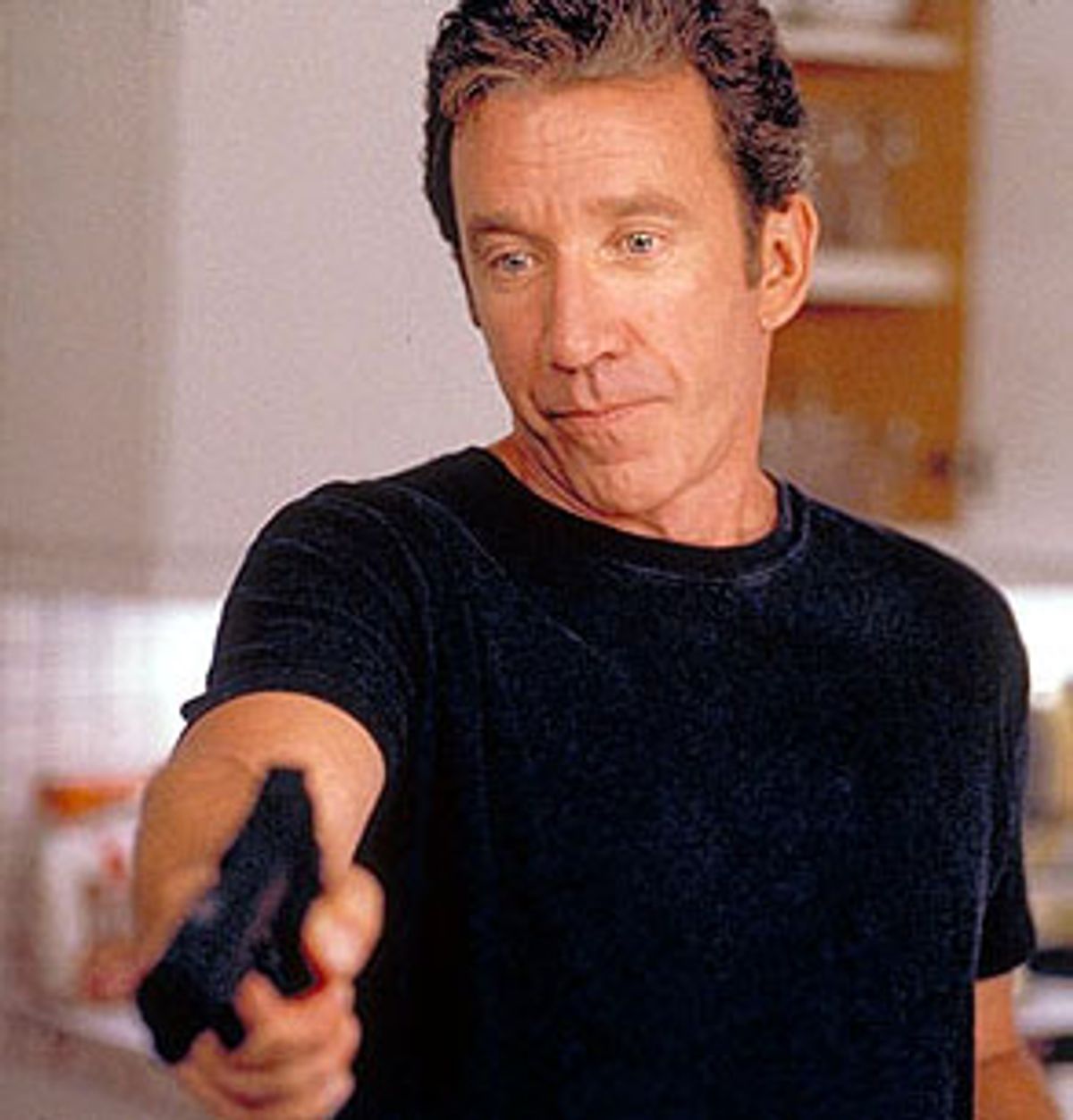 "Big Trouble" is such a feebleminded, good-natured comedy that it actually makes you laugh with that timeless gag of somebody pretending to cough while calling someone else a bad name. You know: "Hack-splutter-hock-asswipe." Then the dude perpetrating this act of deathless wit, an unbathed hoodlum named Snake (Tom Sizemore), gives his buddy a high-five and does it again: Hack-hock-splutter-asswipe. My I.Q. had been sufficiently reduced by this time that I laughed again the second time, although not very hard; I was kind of laughing at myself for still being amused by this dumb joke and this dumb movie.

Based on a novel by syndicated newspaper humorist Dave Barry, "Big Trouble" is the kind of winsome, sexless, brainless laff-a-thon Hollywood mostly doesn't make anymore. Guys and gals make googly eyes at each other but go no further; doofuses dash around with something in a big box that may be worth a lot of money; random acts of comic and cosmic justice ensue. Goats are set loose on a Miami freeway, for no reason that I could follow. A female cop (Janeane Garofalo) sports a racy red bustier from Victoria's Secret under her uniform. A pompous foot fetishist (Stanley Tucci) is squirted with toad venom and has hallucinations involving Martha Stewart. (This movie's recurring Martha obsession is sort of funny, but it has the unmistakable flavor of forced, self-conscious zaniness.)

I have mixed feelings about all this. On one hand, there's definitely a niche for popcorn movies you can take both your 8-year-old niece and your 88-year-old grandma to, movies where nobody's going to be mortally offended or inappropriately turned on and where it really doesn't matter if Dad snores through most of it. "Big Trouble" is no worse in this regard than such Saturday-morning-TV staples as "Abbott and Costello Meet Captain Kidd" or the lesser Dean Martin-Jerry Lewis flicks. Strangely, though, it's precisely the doltish irreverence of "Big Trouble" that sinks it in the end. This movie was originally slated to open last Sept. 14, but given the headlines that week Disney apparently decided that a madcap plot involving lax airport security and criminals who smuggle a bomb aboard a plane might not seem so daffy. Whoopsie!

Once upon a time, director Barry Sonnenfeld had a faintly hip film-school veneer about him; he made his name in the business as the cinematographer for such 1980s stylistic showpieces as Joel and Ethan Coen's "Blood Simple" and "Raising Arizona" and Danny DeVito's "Throw Momma From the Train." He broke into directing with "The Addams Family" in 1991, and if that was nothing more than a low-rent Tim Burton imitation it remains the finest work of his downward-trending career arc. Sure, his Elmore Leonard adaptation, "Get Shorty," had its minuscule cultural moment -- it looks like Aeschylus compared to "Big Trouble," which treads similar thematic terrain -- and "Men in Black" was undoubtedly an awesome experience if you were 12 or younger. All I remember about "Wild Wild West" is Will Smith's theme song and Kenneth Branagh's mechanical giant spider.

Sonnenfeld had better have found his level here, because it's barely possible to go lower and remain within the Hollywood ecosystem: Rodeo films? Christina Aguilera as the sexy young Susan B. Anthony? The sequel to "Glitter"? Here we have Tim Allen, who has parlayed his buffoonish-pop persona from TV's "Home Improvement" into a lucrative buffoonish-pop movie career, as the Barry alter ego Eliot Arnold, a cashiered Miami columnist-turned-adman. Eliot is both the hapless hero of "Big Trouble" and its narrator, which puts him in the position of smugly recounting events that he, as a character, can't possibly know about. This could be an act of post-Brechtian meta-narrative framing. Or it could just be the way that Barry's thoroughly tame and unthreatening universe (as interpreted by screenwriters Robert Ramsey and Matthew Stone) works: Since Eliot is spinning this madcap yarn for us in the past tense, we already know that everything turns out OK.

Eliot has reached a kind of comic dead end in life; fat guys yell at him for not putting enough cleavage into his ad campaigns and his snotty teenage son (Ben Foster) ridicules him for owning a Geo. It's the son's pursuit of a very slightly standoffish girlfriend (Zooey Deschanel, enjoyable with almost nothing to do) that throws Eliot together with Anna (Rene Russo), the oversexed and unhappy wife of Arthur (Tucci), the foot fetishist, embezzler and target of a Mob hit. Got all that? Well, you will, even if you have the volume muted on the USA channel and you're reading the paper at the same time.

Throw in the genial New Jersey mobsters (one of them is Dennis Farina) sent to whack Arthur; some sinister Russians with something deadly in a big silver box; Garofalo as the sexpot cop with a lunkhead male partner who winds up naked in the Miami airport; and Omar Epps and Heavy D as a pair of hard-ass FBI agents and you've got, well, whatever you've got. (I've neglected the Christ-like, Fritos-munching homeless man named Puggy, played by Jason Lee, and the Cuban maid who loves him and whose every appearance is announced by cheese-ola "Latin" music on the soundtrack.)

"Big Trouble" is so all-around inoffensive that nobody will really be bothered by the potentially disturbing airplane-terrorism climax, which is more Sonnenfeld's lamebrained homage to the conclusion of Stanley Kubrick's "Dr. Strangelove" than anything else. As soon as Eliot meets Anna and they start panting at each other, the rest of the plot is obvious and the whole movie becomes disposable, vaguely amusing filler. Eliot has to apologize for his son having dampened Anna's daughter with a squirt gun. "Uh, I'm sorry he squirted on her," he says. "Uh, that is, I'm sorry he made her wet. Um, I mean ..." I laughed. I didn't respect myself, or the movie, one bit after that. Hack-hock-blort-yargh-asswipe.