In his No. 1 bestseller, left-wing provocateur Michael Moore bashes Bush, Clinton and the corporate elite. Too bad he gets his facts wrong -- again. 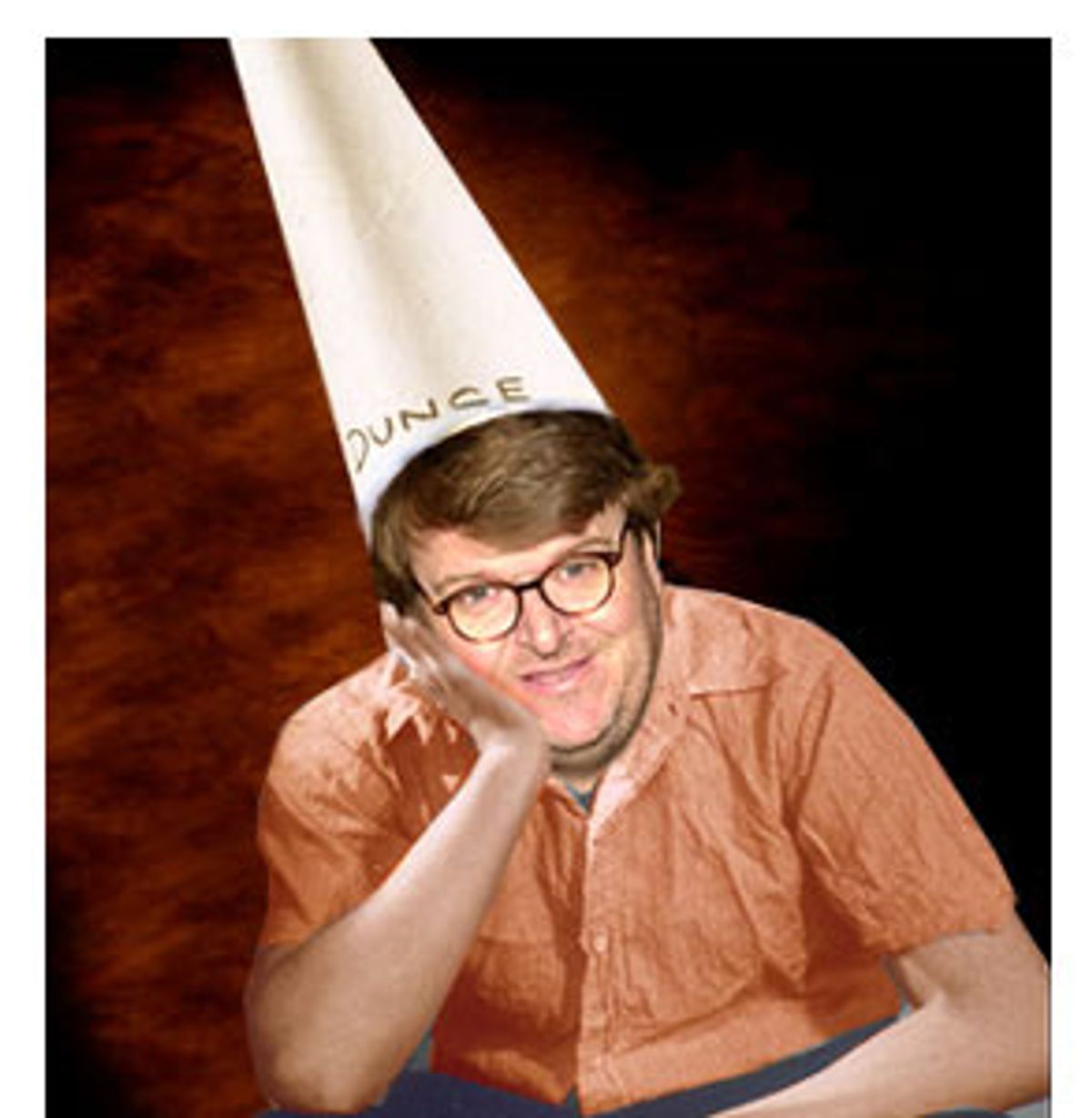 Michael Moore's latest success might be his most remarkable. At a time when the public remains strongly supportive of the Bush administration -- and few dissenting voices have risen above the din -- his book "Stupid White Men" stands atop the New York Times bestseller list for a third week running.

And at a time when some Republican leaders are using Bush's popularity to equate any criticism of U.S. policy with treason, Moore's success should be a reason for any democracy-loving American to cheer.

It should be, but it isn't.

"Stupid White Men" is full of the biting satire Moore has honed on a large scale ever since the release of his 1989 documentary of General Motors' mistreatment of its workers in Flint, Mich., "Roger and Me," became a hit. He followed that up with a mid-'90s TV series, "TV Nation," the bestselling book "Downsize This!" and the 1998 documentary "The Big One," all of which employ his trademark defense of the little guy against the unchecked callousness of corporate America. [Disclosure: My co-editor Brendan Nyhan and I helped bring Moore to speak at Swarthmore College while we were students there. Moore was paid an honorarium by the college for his speech.]

With the success of "Roger and Me" also came a critical rap: That he took liberties with the truth, fiddling with the chronology, for greater dramatic effect. But that criticism doesn't seem to have made an impression on Moore, and that's nowhere more apparent than in "Stupid White Men." In it, readers are told that 10 million people left the welfare rolls during the '90s, brutally kicked off by Bill Clinton. He writes that five-sixths of the defense budget in 2001 went toward building a single type of plane and that the recent recession is nothing more than a fabrication by the wealthy to keep down the working classes. And readers who uncritically accept those "facts" -- along with a number of other egregious and sloppy distortions -- will be duped. Good satire also should be grounded in fact. Regrettably, Moore gets his facts wrong again and again and again, and a simple check of the sources he cites shows that lazy research is often to blame.

Consider, for instance, his claim that "two-thirds of [the over $190 million President Bush raised during the presidential campaign] came from just over seven hundred individuals." Given the $2,000 federal limit on individual donations, this claim is obviously false. To back it up, he cites the Center for Responsive Politics Web site (opensecrets.org) and an August 2000 article from the New York Times. As opensecrets.org clearly indicates, however, only 52.6 percent of Bush's total $193 million in campaign funds came from individuals. The Times article Moore references actually states that 739 people gave two-thirds of the soft money raised by the Republican Party (which uses its money for "party-building" activities that support all GOP candidates, not just Bush) in the 2000 election cycle as of June of that year. Whether out of malice or laziness, Moore conflates the party's soft money with Bush's campaign funds.

This pattern -- the very sources Moore cites proving him wrong -- continues throughout the book.

In a discussion of Pentagon spending, he refers to the "$250 billion the Pentagon plans to spend in 2001 to build 2800 new Joint Strike Fighter planes" and states that "the proposed increase in monies for the Pentagon over the next four years is $1.6 trillion." To back this up, he refers to the Web site of the peace activist group Council for a Livable World. CLW's own analysis of the 2001 budget, however, shows that $250 billion is the total multiyear cost of the Joint Strike Fighter program, not the amount spent in one year. $1.6 trillion, meanwhile, was the total amount of money requested by the Pentagon at the time for 2001-2005. It covers five years, not four, and is a total budget request, not a "proposed increase" over previously requested budget levels. It shouldn't even take this much research, however, to determine that out of the total defense budget request of $305.4 billion in 2001, $250 billion was never intended to go toward one type of plane, nor that an increase of $400 billion per year in military spending was never proposed.

Most baffling of Moore's misstatements may come in a listing of categories that the U.S. tops, such as per capita energy use and births to teenagers. In a blatant misrepresentation, he states: "We're number one in budget deficit (as a percentage of GDP)." When Moore wrote his book last year, the United States was running a budget surplus, as it had for the previous three years.

Just how did Moore get so many of his facts wrong? Lazy cribbing from media outlets and the Internet seems the most likely culprit, as evidenced by a four-page list of allegedly dubious policy accomplishments by President Bush, including cutting funds from libraries and appointing former business executives to regulatory posts. All but one of the 48 accusations appear in the same order and with very similar phrasing to a list that has been printed this winter (but before Moore's book came out) on liberal Web sites and, according to Dr. David A. Sprintzen (often wrongly cited, though not by Moore, as its author), was circulating via e-mail last summer. Belying a lack of original research, Moore even apes many of the negative characterizations of individuals, calling judicial appointee Terrence Boyle a "civil rights opponent," for example (the list refers to him as a "foe of civil rights"), with absolutely no context for why exactly Boyle deserves that moniker (one certainly has to wonder whether Moore himself knows).

Curiously, Moore cites no source for this list. He only notes that readers "can keep track of what Bush did and does during his administration" by reading Molly Ivins' syndicated column and the Web sites smirkingchimp.com and bushwatch.com. The latter two did print the list, but not until this winter, well after Moore wrote his book, though before it was published.

Just as worrisome as Moore's frequent mistakes is the distorted manner in which he presents some of his claims that have a factual basis. Consider, for example, this critique of Bill Clinton.

"[H]e has been able to kick ten million people off welfare," he writes in a list of attacks on the former president. While the welfare rolls did drop substantially while Clinton was in office (although the total number as of June 2000 was 8.3 million), many people left voluntarily to take jobs as the economy grew or for other reasons. Far fewer were booted from the rolls by the five-year limits Clinton signed into law in 1996 or by stricter state limits.

Grossly misrepresenting the facts to make Bill Clinton look bad is a pattern in his chapter "Democrats, DOA." Moore also derides Clinton's record on feminism, stating "Clinton learned that by talking a good feminist line, he could arrange it so that not one feminist leader would decry the order he signed in 1999 to deny federal funds to any foreign group that discussed abortion during consultations."

Moore is correct about the law here (although Gloria Feldt of the Planned Parenthood Federation of America did criticize the move). In framing Clinton as having a crafty antiabortion agenda, however, he blatantly ignores that Clinton eliminated the so-called "Mexico City Policy" banning U.S. funding of overseas clinics that perform or promote abortion in 1993 and only reluctantly signed it back into law in 1999 as part of a deal to pay nearly $1 billion in arrears to the United Nations. The funding was then restored in the next year's budget, albeit with concessions to delay its implementation, which Moore also fails to note.

To truly understand how absurdly Moore twists the truth to advance his agenda, consider his description of the economic downturn. After accurately describing the hard times that have hit the country in the past year, he offers this analysis to his readers:

"There is no recession, my friends. No downturn. No hard times. The rich are wallowing in the loot they've accumulated in the past two decades, and now they want to make sure you don't come a-lookin' for your piece of the pie."

Forget about overinvestment during the tech boom, a sharp drop in business spending or even the simple facts of the business cycle. Michael Moore has the real answer: "[The rich have] decided to perform a preemptive strike in the hope that you'll never even think of eyeing their piles of cash." Not content to simply berate the wealthy for their disproportionate advances in income and wealth during the '90s boom, Moore takes his aggressive jargon to extremes by concocting a conspiracy in which the elite simply created a downturn that he claims doesn't really exist. This isn't satire, it's paranoid propaganda.

For the bestselling nonfiction book in the country, "Stupid White Men" has received remarkably little scrutiny and few serious reviews. Moore is much beloved in Britain, and a review on a BBC show called his book "fantastic" with "loads of research." Unfortunately, he doesn't seem to have read much of it -- though the thousands of people who have bought his book surely don't know that.