Ashley Judd as a knocked-around military wife brightens what might be the most entertaining big movie this year. (Not like that's saying much.) 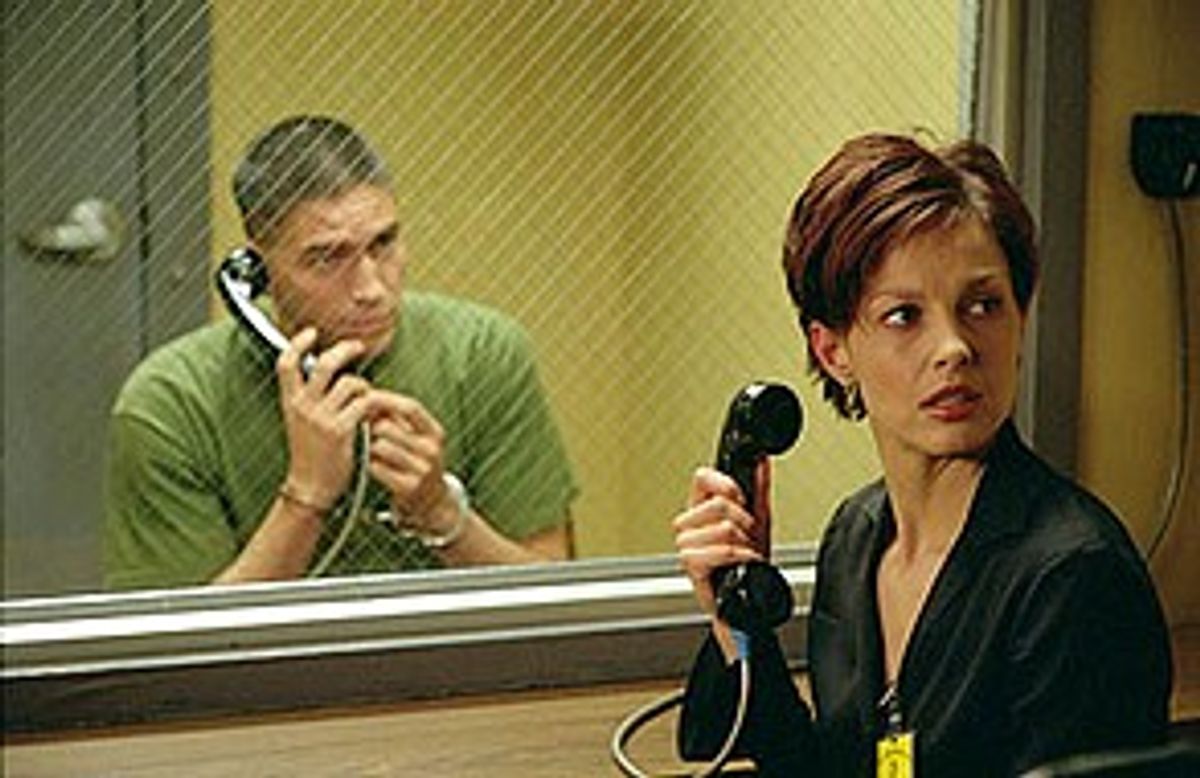 Ashley Judd is the only performer I know who's capable of sneering with her eyebrows. You never catch her upper lip curling. But those two immaculately plucked arches above her big peepers hold all her contempt and disbelief for whatever bushwah has the temerity to stray in front of them.

Judd has staked her claim as the movie's premier Mighty Mite. She's the little Size 2 that could, taking on murderers, frame-ups, lying spouses and trouncing them all. Despite her delicate bone structure and petite build, she is one hard number. You're never in fear for her. The determination Judd shows in movie after movie is both bracing and preposterous. She's become something like the women's movie equivalent of a male action hero. Part of her popularity has to be that the women's movies she makes -- whatever else they might not be -- aren't mush: not coffee klatches masquerading as movies; not object lessons about the power of sisterhood. Her movies are revenge fantasies. Whenever some powerful male tries to make her quake in her high-heeled ankle boots she stands her ground, delivers a couple of lines that could freeze alcohol and causes the audience to break out in cheers.

And yet for all that, there's no contemporary movie star whose appeal is more frankly masochistic. Before our Ashley can triumph she has to suffer, and she suffers as flagrantly as any '40s melodrama queen. She suffered so much in the trashy, terrifically entertaining "Double Jeopardy" that she recalled Thelma Ritter's famous line from "All About Eve": "Everything but the hound dogs yappin' at her rear end." Even playing a serial killer in "Eye of the Beholder" (a muddled version of Marc Behm's brilliant novel, a "Lolita" rewritten by a continental Jim Thompson), Judd got to fall apart as she relived buried childhood trauma. Watching her dispatch one man after another, you wanted to encourage her the way you'd encourage someone to have a good cry. "Go ahead, honey, shoot a few more and get it all out." If she ever finds a director who can whip up the sort of unhinged melodrama she deserves, the results could be delirious. Even in overwrought, soapy movies she's mad fun to watch.

On its own terms, the picture is well-made and reasonably compelling, until a final plot twist makes utter nonsense of everything that's come before. Judd plays a hotshot San Francisco lawyer whose husband (Jim Caviezel, with his peculiar zonked intensity) is arrested and put on trial in a military court, charged with taking part in a 1988 Marine massacre of civilians in El Salvador. The government has been hunting him ever since he deserted and assumed a new identity. Of course, Judd acts as his lawyer, and the setup is red meat for a drama queen. She has to believe in her husband's innocence while finding out that nearly everything he's told her about his past -- including his name -- is a lie.

There's an art to playing melodrama without going soggy. Judd is awfully good in the movie's early scenes. Every time she hovers on the verge of breaking down you can see her choke it off and steel herself for the fight ahead. Her vocal modulations are expert in the jailhouse interview scene where she first talks to her husband after he's been taken into custody. You hear her forcing the choke out of her voice, straining to gain a little distance with a sliver of sarcasm. And she gets to show off her talent for cool, screw-you comedy. Jogging through the military base where she's relocated during her husband's trial, she gets wolf-whistled by a gang of passing soldiers and calmly shoots them the finger without even breaking stride.

And as if the revelation of her husband's secret past isn't earth-shaking enough, Judd gets knocked around no less than three times in the course of the movie. The crashing and bashing isn't explicit or sadistic; we're not meant to enjoy it, and it's not lingered on. But just as with male action heroes, we understand that Judd is sucking up every indignity, waiting for payback. She wears a black eye through some scenes, the way Arnold and Bruce sport cuts and bruises in the course of their travails.

Because Judd needs a guide in the bizarro world of -- you should pardon the expression -- military justice, she hires a former judge advocate general played by Morgan Freeman, an ex-boozer eking out a living defending hookers in this rathole military base town. Judd and Freeman starred together before in "Kiss the Girls," but they didn't have the rapport that they do here. The two don't fall into the relationship you might expect of grizzled veteran and greenhorn who's learning the ropes because each has too much innate confidence and neither is willing to budge. And yet they're very easy with each other. This is Freeman's most relaxed and appealing performance in a while. Schlepping around in sweatshirts and jeans, donning a cheap suit coat and clip-on tie for the courtroom, Freeman is as woolly as his untidy hair. He's having too much fun here for his acting to be called deadpan. It's loose and playful. When, in one scene, he has to lean on Judd for help in getting to his car, Freeman tries on a great bemused expression. He looks like a prizefighter who finds Tinker Bell helping him out of the ring. And Freeman can shake off the shambling comedy of the role to snap into focus, as in one tense scene where he cons a witness for evidence.

There's a third enjoyable performance from Adam Scott, who plays the inexperienced military lawyer assigned to the case. When he makes his first appearance, upright and spic-and-span in his dress uniform, his body is so streamlined that his baby-faced head seems too big for the rest of him. He's less like a soldier than a bobbin' head doll version of a soldier. Scott doesn't overdo the character's naiveté. He gets laughs by underplaying. (Unlike Amanda Peet, as Judd's screw-up sister, who can't seem to stand for a simple establishing shot without doing five things to get our attention.)

Apart from "Blade II," "High Crimes" is probably the most entertaining commercial movie so far this year. And yet it's junk. The director, Carl Franklin, does clean work and, especially in the opening scenes, he moves through the expository material so fast and efficiently that the picture seems to be flying by. And he does what he can to catch you by surprise, employing jump cuts in a close-up of Judd talking on the phone, or lingering on an odd detail, like the unsettling shot of a young Salvadoran boy peering into the camera in the opening flashback. And you have to admire Franklin's guts. This isn't exactly the most receptive time for a movie that's essentially about the military using terrorism to inflict atrocities. (I'm not saying that's what we're currently doing in Afghanistan. But there's a distinction between this war and our disgraceful incursion into Central America during the Reagan years.)

Franklin is a pro, and he turns in a workmanlike piece of direction. But this is the director of "One False Move" and "Devil in a Blue Dress." (The commercial failure of that movie robbed us of what might have been an adult franchise of mysteries featuring Denzel Washington, who did his best work in it, as Walter Mosley's detective Easy Rawlins.) There's no room for him to be an artist in "High Crimes." You can admire how he directs the flashbacks, and particularly the violence, in quick, staccato bursts. But the nature of the material is such that the whole movie evolves that way. "High Crimes" isn't the sort of picture that explores characters or situations or allows a director to accumulate some texture. Character and plot development here are essentially shorthand to get on to the next thing. So Franklin functions as the best traffic cop he can be. He can't even do that in the last 20 ridiculous minutes. Maybe the twist makes sense in Joseph Finder's novel. But here the screenwriters, Yuri Zeltser and Cary Bickley, could probably turn a quick buck by stationing themselves in theater lobbies and offering to explain the plot to puzzled moviegoers. (At the advance screening I attended they would have cleaned up. In the lobby afterward, pockets of people were standing around together trying to figure out what happened.)

It's too early in Carl Franklin's career (this is only his fourth feature) for him to be reduced to hack work. You can sit through "High Crimes" without being bored or wanting to walk out, and unlike with "40 Days and 40 Nights," "Showtime," "Hart's War," "Panic Room" or others I've already blocked from memory, your head doesn't feel like it's been stuffed with cotton afterward. Movies go through bad patches year in and year out, and so "High Crimes" may not be emblematic of anything. But we're a quarter of the way through the year, and commercial movies have been as bad as I can remember them. It's hard enough to sit through them, and many of the critics I know are wondering out loud why the hell anyone would want to read about them. What can there possibly be to say? A critic wants to get people excited about movies, even excited about bad movies that have something to offer, and "High Crimes" does offer good, often sharp and funny work from its two stars. But you can't fake excitement, and it's a lousy feeling to know that the best commercial movie I can point you to right now is this shallow, self-erasing nonsense.