Under intense pressure to intervene, Bush reluctantly dispatches Colin Powell. But does the president have a plan? 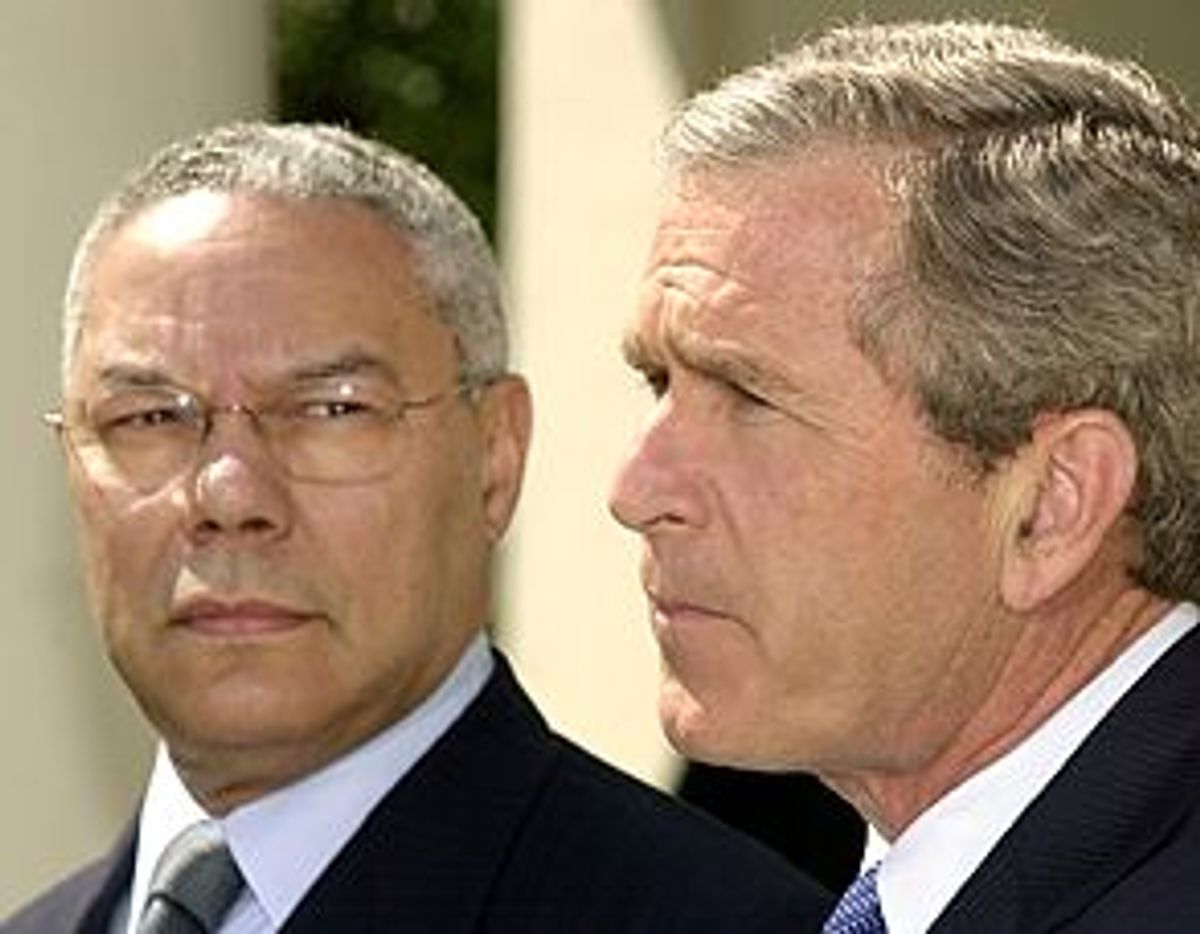 After a year of hands-off management of the crisis in the Middle East, President Bush reversed course Thursday and decided to send Secretary of State Colin Powell to the war-torn region to help broker a settlement between Israelis and Palestinians.

Bush's reversal comes under immense domestic and international pressure for the United States to take a more active role. Just two days earlier, on ABC's "Good Morning America" Tuesday, Powell had said he would not go to the region until the fighting died down.

But Powell is now going without any new plan to reconcile Palestinians and Israelis. When one senior administration official was asked whether Powell had a new plan with him, the official said only that the secretary brings "the vision that we had put forward previously."

That Bush administration "vision" includes months of fruitless appeals to Palestinian Authority chief Yasser Arafat to "do more" to rein in terrorists, and for both sides to negotiate a series of failed peace plans known as Tenet and Mitchell, as well as carrying out U.N. resolutions 242 and 338 going back decades.

"The president wanted to review that, to remind everybody of that vision, and to reinforce that vision as the way forward," the official said.

Even if Powell does not bring anything new to the debate, his presence may have a calming effect. Clearly, the administration felt something had to be done. The Israeli army's powerful and bloody response to a slew of suicide bombings last week -- including one that killed 26 Jews at a Passover Seder last Wednesday -- has "started to have a greater effect than just going in and rooting out a few terrorists," said the official. "We saw a deteriorating situation with some of our best friends in the region, but, more importantly, some of Israel's best Arab friends in the region with whom they had developed solid relations over the years," the official said, speaking on condition of anonymity.

Bush himself said Thursday the situation had spun out of control and was threatening to engulf neighboring Arab allies, whose streets are now full of protesters, tear gas, water cannons and burning American and Israeli flags. Turning away from the burning Middle East -- a policy adopted as soon as the Bush administration took office in an apparent attempt to differentiate itself from the Clinton team -- was no longer an option.

Egypt, the first Arab nation to make peace with Israel, suspended diplomatic contacts Wednesday and Jordan was under pressure by street protests -- spreading around the Arab world -- to also cut ties to Israel.

Even if Powell does nothing more than interrupt the fighting for a few days, he will have accomplished an important task. The hope is that his presence will help mute the thousands of demonstrators in Arab cities around the Middle East who have begun to show posters of Osama bin Laden alongside those of Arafat.

Bush's senior foreign policy advisors essentially decided, in a series of nonstop meetings over the past few days, that Powell must go on a firefighting trip -- not a diplomatic one -- to prevent the unraveling of everything that Bush's foreign policy counts as its goals: the war on terrorism and completing his father's unfinished business in Iraq.

Powell will meet with leaders of Israel, the Palestinian Authority, Jordan, Egypt and Saudi Arabia on the tail end of a previously scheduled trip to Europe beginning Sunday. He's dropped a visit to Berlin but will meet European Union foreign ministers Wednesday in Madrid. The E.U. has been critical of Israel and called for immediate withdrawal of the tanks and troops Israeli Prime Minister Sharon has deployed across the West Bank.

The Bush administration official shrugged off charges that it has become isolated in support of Israel while allies in Europe and the Middle East condemn Israel for overreacting to the suicide bombings.

"Well, we are often accused of standing alone, and when we think it's appropriate to hold a principled position, we will do so, whether others agree with us or not. We're not doing this in response to what the E.U. may be doing or what others may be doing," he said.

If the Bush administration was alone abroad, it was not at home where polls showed this week four out of five Americans backed Israel in its struggle against the Palestinians. Thursday Bush remained firm in support for Sharon and repeated his belief that the Israelis had a right to defend themselves against suicide bombers.

Palestinian officials said that Bush's lack of a deadline for an Israeli withdrawal was a green light Israel would use to continue its military operations in West Bank cities -- either until Powell arrives next week or even beyond then.

Palestinian legislator Hanan Ashrawi said on CNN that she hoped for an "immediate" pullback of the Israeli forces, blaming them for murder, massacre, starvation and other crimes. But Israeli officials showed little inclination to pull back.

"We welcome the mission of Colin Powell but our withdrawal won't be automatic and won't be without an agreement" to rein in terrorism, said Deputy Defense Minister Dalia Rabin-Pelossof in a television interview, also on CNN.

"The official response of the prime minister's office is we go on with the [military] operation until we get a response from their side," she said.