William Harvey discovered the limits of free speech when he paraded a block away from ground zero with a poster of Osama bin Laden. 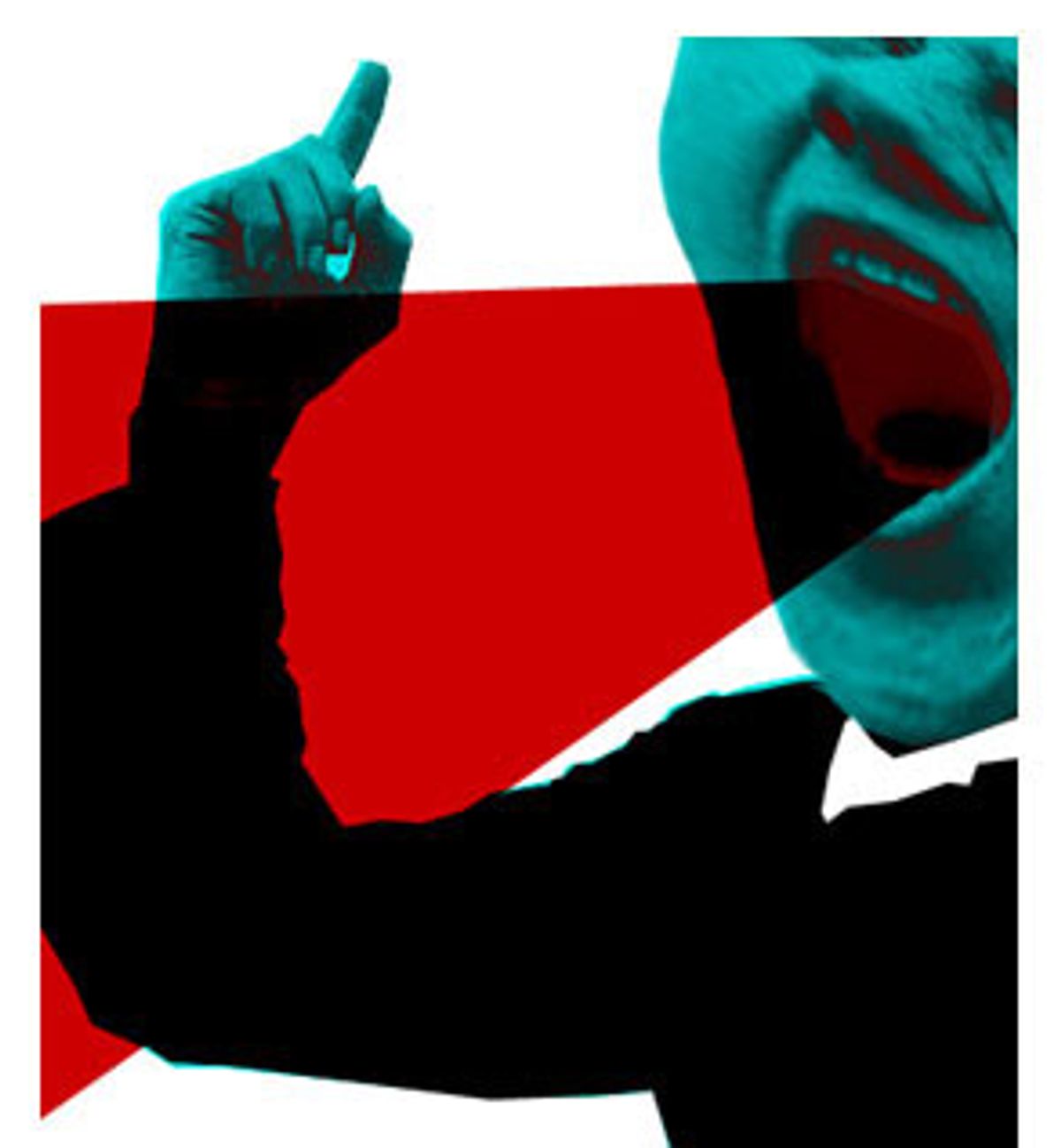 The crowd surrounded William Harvey. They cursed him, they told him to get the fuck out -- about 20 men and women on a street where you could smell the rubble of the fallen towers. The disaster was just a block away. William Harvey did not move. He held a sign that showed a picture of the World Trade Center and the face of Osama bin Laden hovering, superimposed. Harvey tried to hand out leaflets. He told the crowd: "America is getting paid back for what it's doing to Islamic countries."

"Fuck this guy, lock that fucking guy up before I kill him!" yelled one man, and a chorus of obscenity followed. Their faces turned ugly, and still William Harvey stood his ground, even as the crowd swelled to over 60 people and spilled into the street. Traffic came to a halt; horns blared, sirens sounded. The police showed up, elbowed in, surveyed the situation and arrested the offending parties -- William Harvey and his leaflets. Incredibly, Harvey was charged with disorderly conduct, though he apparently did nothing more than speak his mind.

That was Oct. 4, 2001, when the wounds from Sept. 11 were still fresh. Harvey now faces a criminal trial in Manhattan because he pissed off a lot of freedom-loving people who didn't like the fact that he had the freedom to speak his mind. Of course, the case should have been thrown out immediately on free speech grounds, but in the post-9/11 bizarro world, patriotism trumps the First Amendment.

Consider the 9/11-inflected opinion of the judge who struck down Harvey's motion to dismiss in mid-February. "The defendant chose to disseminate his message at a location near Ground Zero at a time shortly after Sept. 11," wrote Judge Neil Ross of the Criminal Court of the City of New York. "[A]t the very least, he was aware of and consciously disregarded a substantial and unjustifiable risk that public inconvenience, annoyance or alarm would result."

Judge Ross then went on to stretch himself very thin. He argued that the charge of disorderly conduct is generally defined by "the reaction which speech engenders, not the content of the speech. The angry, threatening of the large crowd that stopped to read this defendant's message" created a volatile situation. This is a ridiculous line, and it upholds the patently unconstitutional argument known as the "hecklers veto." If someone doesn't like what you're saying, and commits a crime as a result, your speech is liable and you go to jail.

Not surprisingly, free speech advocates are rallying to Harvey's cause. "The Harvey case is a threat to the First Amendment and it cannot be allowed to stand," says Donna Lieberman, executive director of the New York Civil Liberties Union. "It's wrong in the law, it's wrong in the precedent and it defies logic. It would rewrite unpopular speech out of the Constitution."

If Harvey wants to howl on the street corner that we're forcing Islamic countries to eat pork on the sly, then that's his American prerogative. Perhaps Harvey is a man of deep principle; arguably he has a good point about U.S. policy in the Middle East. Whatever his motives -- which we should learn more about once his trial begins on April 25 -- you have to laud him for the sheer ballsiness of his caper, for his willingness to test the strength of one of our Constitution's core principles.

"This could be a historic case," says Lieberman, "in that here is a court pandering to a politically correct line and popular pressure."

Harvey's attorney, Thomas O'Brien of the Legal Aid Society, says there is clear legal precedent that will vindicate his client. "The key decision," says O'Brien, "is the Terminiello vs. Chicago case of 1949, which is to free speech what the Pentagon Papers case was to freedom of the press."

In 1946, Arthur Terminiello, a defrocked Catholic priest and devotee of a notorious anti-Semite, stood before the Christian Veterans Hall in Chicago, which was located in a heavily Jewish neighborhood. Terminiello had heinous things to say. He denounced the Jews and Communists and Democrats who were trying to destroy America. He praised Hitler: The "Communistic Jews" are the problem, he said, and Hitler had the solution.

This came just after tens of thousands of Americans had put their lives down to topple Hitler; millions of Jews had been slaughtered by the Nazi regime, and here was this creepy priest siding with the German madman. It was no surprise that a crowd of Jewish protesters gathered outside the Veterans Hall, howling and surging, throwing bricks through windows, trying to break into the auditorium, tearing the clothes off those who dared to enter to hear Terminiello speak.

"Terminiello was arrested," says O'Brien, "and he got a conviction of disorderly conduct, which was a statute pretty similar to the one we have here. But the Supreme Court reversed. The idea is that speech is provocative and produces unrest -- that's the heart of free speech."

Ironically, in the 1960s, the Terminiello decision was cited in the major Supreme Court reversals on behalf of civil rights demonstrators in the South -- Cox vs. Louisiana and Edwards vs. South Carolina. In those cases, peaceful demonstrators were arrested for inflaming the crowd that gathered. But the language of the Terminiello ruling was clear -- speech is supposed to provoke disturbance.

It's language that should be held dear in these times when grim and ugly government spokesmen (in this case, White House press secretary Ari Fleischer) are telling us to "watch what you say"; Attorney General John Ashcroft, our highest lawman, testifies before Congress that "those who scare peace-loving people with phantoms of lost liberty ... only aid terrorists."

Ashcroft's bunkum stands in sharp contrast to the majority opinion in Terminiello vs. Chicago, written by the great Justice William O. Douglas, who would go on to serve the court for 37 years,longer than any other justice in history.

"The vitality of civil and political institutions in our society depends on free discussion," Douglas wrote. "It is only through free debate and free exchange of ideas that government remains responsive to the will of the people and peaceful change is effected."

Douglas begins with the obvious, but he goes on to make a frank challenge to the American people, and one is tempted to let out whoops as his argument crescendos. "Accordingly, a function of free speech under our system of government is to invite dispute," he wrote. "It may indeed best serve its high purpose when it induces a condition of unrest, creates dissatisfaction with conditions as they are, or even stirs people to anger."

As for the thorny legal thicket of how to define disorderly conduct, the conclusion in Terminiello vs. Chicago is clear, and the precedent it sets should send People vs. Harvey out the window and into the dumpster. Free speech, wrote Douglas, "may strike at prejudices and preconceptions and have profound unsettling effects as it presses for acceptance of an idea. That is why freedom of speech, though not absolute, is nevertheless protected against censorship or punishment, unless shown likely to produce a clear and present danger of a serious substantive evil that rises far above public inconvenience, annoyance or unrest."

Speech is battle, and the First Amendment is designed to help keep the playing field level. To test the right to free speech, William Harvey was right to choose the venue he did, as distasteful as this may seem to some. Free speech is tested where people will glower or cry out or scream in hatred at what they hear. That is where free speech becomes sacrosanct.