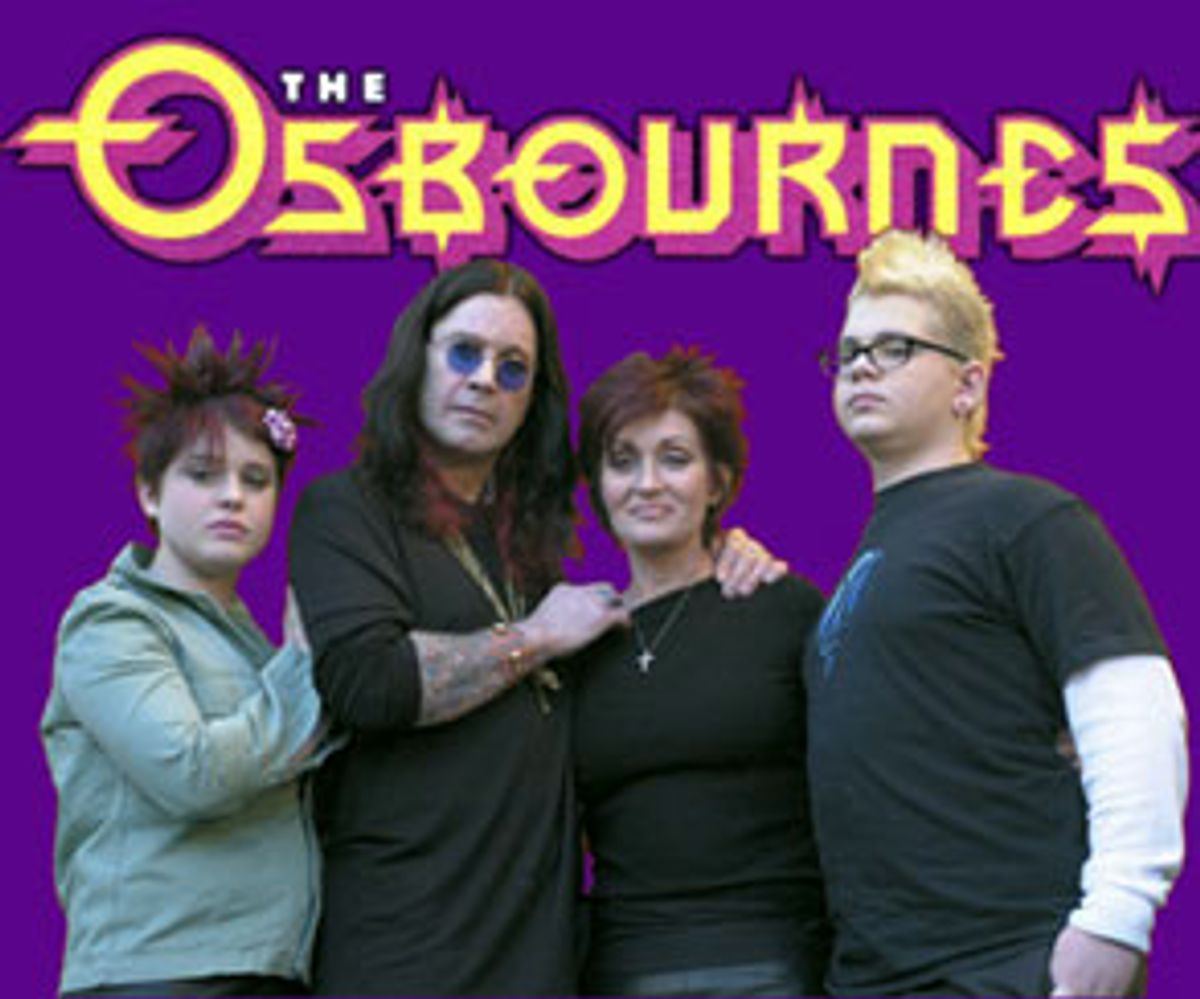 Five episodes into its 10-episode run, MTV's "The Osbournes" has already been compared to every classic nuclear family sitcom ever produced. The series has been likened to "The Simpsons," "Married With Children," "Father Knows Best" and "The Addams Family," though, actually, Ozzy Osbourne as a TV dad is closer to Herman Munster than Gomez Addams. The Osbournes even have a self-conscious "normal" daughter (eldest daughter Aimee, who declined to participate in the series) in the phantom role of Marilyn.

Everybody loves "The Osbournes" -- including George W. Bush. The president has reportedly invited the compulsively potty-mouthed Osbourne family to the White House for a visit, Ozzy's lifelong banishment from the state of Texas notwithstanding. It turns out that the former Black Sabbath frontman piddled on the Alamo back in 1981, which, considering his ongoing troubles with the family's horde of incontinent lapdogs, is a little ironic.

The unscripted half-hour comedy, which MTV developed after paying the Osbournes a visit in an episode of "Cribs" (MTV's version of "Lifestyles of the Rich and Famous"), provides a glimpse into the domestic life of the legendary rocker, his wife and manager, Sharon, and two of their three teenage children, Kelly and Jack. Jack is a self-described "ass-kicking fat kid" in combat fatigues, who amuses himself by bayoneting cardboard boxes as Mom explains to the cameras that "he's kind of the oddball at school." Pudgy, pink-haired Kelly pouts, screams and sulks like a champ, then goes into convulsions of embarrassment when her dad grills her about exactly why her older sister has set up a gynecological appointment for her. As for Ozzy himself, he may, in his words, be the "Prince of Fucking Darkness," but being the father of teenagers has seemingly put the fear of God into him. Wide-eyed and nervous as Kelly prepares to go out one night, he pleads with her: "Don't drink, don't take drugs. Please. And if you have sex, wear a condom."

In the first month of its existence, "The Osbournes" has become one of the hottest shows on TV. It's also among the highest-rated shows in MTV's 20-year history, having drawn 4.1 million viewers with its March 26 debut, more than any other series on cable. The show's enormous popular and critical success has come as such a surprise that other networks have begun to circle the family, which does not have an exclusive deal with MTV, like a flock of starving buzzards. As Variety reported earlier this week, high-ranking MTV executives, who are currently in negotiations with the Osbourne clan for a second season, sent out letters to several networks reminding them that "The Osbournes" is still very much an MTV show.

MTV shacked up with the Osbournes for six months, with the now-familiar intention of capturing the experiences of "real people" in their natural habitat. The table-turning difference here is that the Osbournes are not the tedious "real people" of the televised variety. They -- or their paterfamilias, anyway -- are already famous. And if the series makes one thing abundantly clear, it's that after 30 years, being famous is a job like any other -- a job that requires dressing up in "Moulin Rouge" drag and fellating a banana, but a job nonetheless. (And one with its own pitfalls. "Darling," Ozzy patiently explains to Kelly when she complains about his failing hearing, "you have not been standing in front of a billion decibels for 30 years. Just write me a note.")

Here is Ozzy stuck on the Weather Channel, trying to figure out how to work the remote control so he can watch the History Channel: "I press this one button and the [Bleep!] shower starts. Where [Bleep!] am I? It's a [Bleep!] nightmare! Nightmare in Beverly Hills!"

Here is Ozzy doing what dads do in this situation: "Jaaaack!"

Just how "normal" the Osbournes are is of course what makes "The Osbournes" such an unmitigated delight. In a TV landscape littered with beautiful yet otherwise average people of dubious talent desperately vying for the world's attention, the Osbournes are refreshingly unassuming. Sure, they have their quirks. The walls are covered in crucifixes, they swear with every other syllable and Dad's brain is, well, fried. But otherwise, we're pretty much talking about the Cleavers, circa 2002.

The relationship between Ozzy and Sharon is especially poignant. Not only is her business acumen and role in the family's fortune in ample evidence, their fondness for each other is obvious enough to embarrass their teenage daughter. Sharon is clearly not only Ozzy's wife and partner, she's more or less his mom, too. After taping an appearance on the "Tonight Show" with Jay Leno -- a canny, record-promoting appearance made at Sharon's insistence -- the couple kisses as they wait for the elevator.

"You're too old," Kelly complains.

It's tough to pinpoint a single aspect of the show that accounts for its runaway success. "The Osbournes" kicked off as Ozzy and the family moved into their new palatial Beverly Hills mansion, amid unpacked boxes labeled "pots and pans" and "Satan heads." The joke is that the neighborhood hasn't gone anywhere. Two blond Hollywood wives speed-walk past the crucifix-laden gate every day, eager to invite Sharon along on their daily power stroll. When English neighbors keep the Osbournes up at all hours playing techno music and singing "My Girl" with acoustic guitar accompaniment, Ozzy finds himself thinking longingly of his old neighbor, Pat Boone. Sharon misses him, too. "He was just the best person ever to live next door to. You don't realize it until you get the neighbor from hell."

It's not just the noise coming from next door that gets on their nerves, either. As Sharon sniffs, "They don't do anything except live off Mummy and Daddy's money." Chez Osbourne, this is ample cause for contempt. When Sharon tells Kelly that their idle-rich neighbors made fun of Ozzy's crosses, an indignant Kelly replies, "He worked for those fucking crosses!"

While they may not be "the kind of family where Dad comes home with a briefcase every night," what family is, these days? It might just take a 50-whatever rock star to support a family Ozzie and Harriet style. Whatever else one might think of Ozzy's career, it can't be said that, at his age and with his history, it isn't a struggle to get through two shows on two successive nights. He works hard for the money his little princess spends at Tiffany. And don't think it doesn't make him sick when the dogs destroy yet another piece of furniture. (Even if Elijah Wood is on hand to help clean up the mess.)

Meanwhile, the neighbors won't shut up, and Ozzy is left with no other choice but to pitch a log through their window (the bagels and the large ham Jack and Sharon tossed into their yard earlier didn't do the trick). The police are summoned, and after a cordial exchange with the family, agree to intervene. Ozzy, after all, is eminently reasonable. Earlier that day, dressed in a bathrobe and glasses, his hair in a prim bun, he complained to his wife about the water pressure in the steam room. The shower had been fitted with a water-saving device required by the state, she explained. "We'll take it out and adjust it after the inspection."

All of which should help shed some light on George W.'s purported invitation. After a few episodes of "The Osbournes," it becomes clear that this family has some serious values.