Even in the middle of the dot-com boom, some start-ups weren't just about the money. 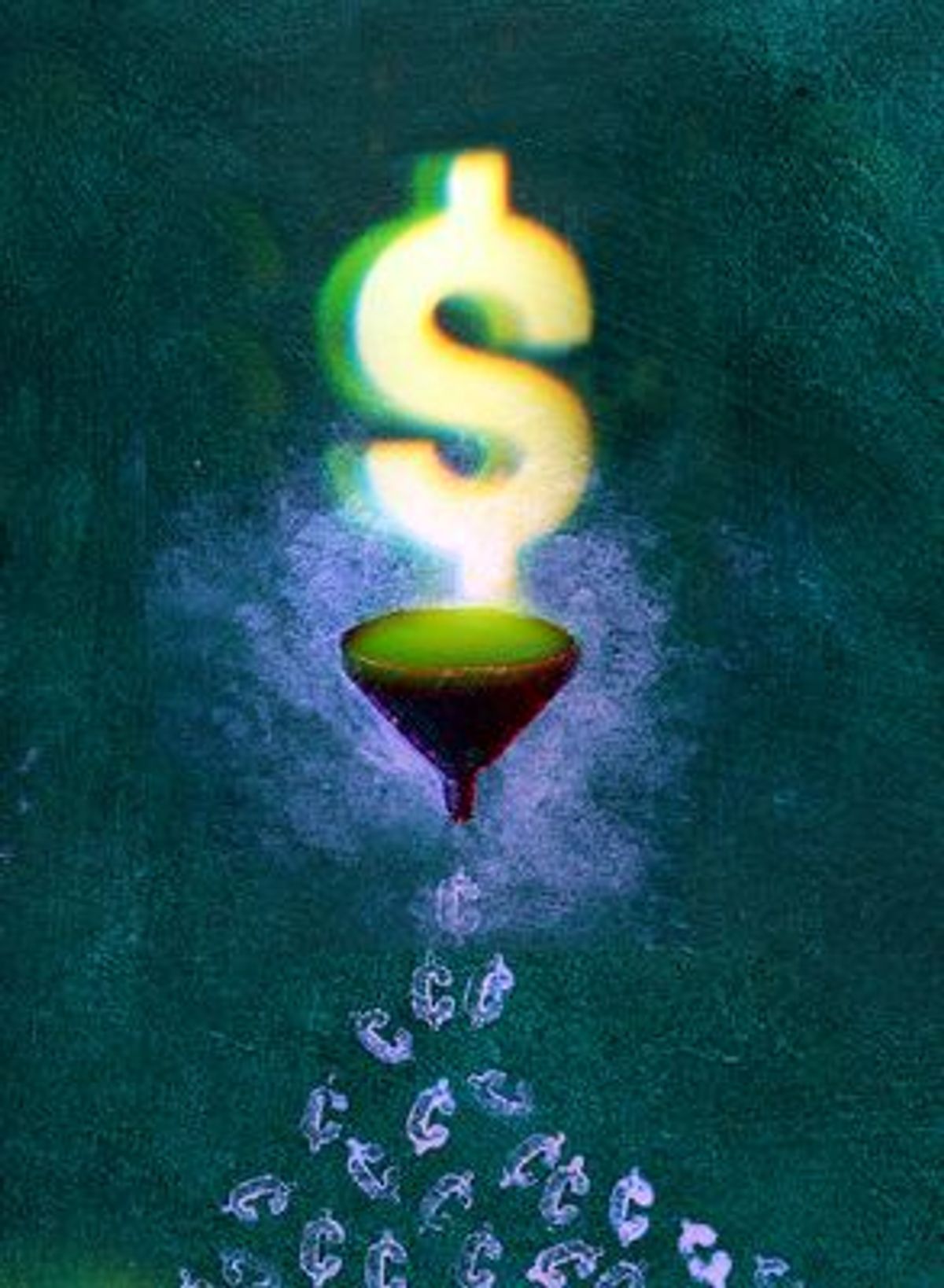 The thing that amazes me isn't that I lost a million dollars, but that I had it to begin with. My career path looked more likely to lead to a night manager's job at Border's than to financial success. I racked up a solid C average as an English major, then temped at law firms, proofread, taught English in Prague and reported for a small newswire service.

Then, one day, at a wedding, I met a technical writer who worked at a telecommunications equipment start-up and needed an assistant. My girlfriend was Catholic, my girlfriend was pregnant, and I was making $26,000 a year. I said yes.

From the beginning, the little technology start-up didn't feel like any other job. At my East Coast jobs, especially the law firms where I temped, a strict hierarchy was visible. The partners had big offices with a secretary stationed in front, the associates had little offices with no secretary, and the paralegals had cubes. Everyone wore suits or dresses.

At my new job, egalitarianism ruled. On my first day, a tall friendly guy in jeans and a T-shirt came by. He introduced himself by his first name and asked me if I needed anything. My computer seemed to be working fine, and I had already gotten into my e-mail, so I thanked him and said no, thinking this was an awfully friendly I.T. guy. It took me a few days to realize that he was my new CEO.

The cube next to me held an engineer who never said hello, wore the same faded blue T-shirt every day, and always had at least a dozen empty Odwalla bottles lying around his cube. Sometimes, this man just lay his head down on his desk and took a nap. But here the fact that this guy produced some of the product's most essential ASIC designs and worked until midnight to meet his deadlines was all that mattered.

The top guys heated their lunches in the same microwave as everyone else, and all employees, even the receptionist, got stock options. Company execs were low key and straightforward, but everyone understood we were burning through our venture capital, and this created a real unspoken pressure to deliver. If we didn't come up with a working product and sell it successfully, the only thing left of the company would be a cool logo and some empty cubes.

We were trying to build a SONET add/drop multiplexer. This is a piece of telecom equipment that helps route data across fiber optic lines. Think of it as kind of a subway station on a chip. Data comes in, gets rerouted, and goes out. There are some added complications, like the fact that data comes in at different speeds, which means that each subway car, for example, requires special, individual attention.

And the amazing thing is, we did build it. In the process we all became rich, and then poor again. So on the one hand, our story was the typical dot-com boom/bust story -- start-up flies high, and then is brought down low.

But there was a difference between us and the hundreds and thousands of other companies that were starting up, grabbing for IPOs and flaming out all around us. While so many other companies were trashing the Silicon Valley dream, substituting greed for innovation, and turning the very word "start-up" into a synonym for "investment banker scam," we were living it. We made something real, something that was better than what came before.

My little company did not invent the concept of the SONET add/drop multiplexer. Nortel, Lucent and Fujitsu, big old-school telecom equipment makers, have made and sold this equipment for a long time. But their typical SONET multiplexer is a huge, complicated affair that takes up an entire standard 7-foot telecom rack and requires a week and usually a forklift to install.

Our founding engineer came up with a new approach. First drawn out on an Applebee's napkin, his design employed custom chips to cram all the functions needed for handling multiple speeds onto a single piece of equipment. The box held interchangeable modules, and changing the speeds on the multiplexer was as easy as swapping the modules. This reengineering shrunk the whole multiplexer down to the size of a microwave oven and made it cheaper to manufacture. The whole thing could be installed and made ready for service in less than an hour.

The software interface for our product also took a new approach. Traditionally, telecom products used an interface that required a dedicated Unix machine to monitor the equipment. But our software designers created a Java-based graphical user interface. This Java app downloaded and ran under any off-the-shelf Web browser. You just plugged an Ethernet cable from any PC or Unix machine into the front of our multiplexer and logged in with an IP address.

It was a brilliant design, and would be cheaper to manufacture than traditional gear, but as we tried to build it, problems plagued our little company. Software builds flaked, circuit boards failed, and components didn't come in at their specifications. Demos only worked if nobody breathed too hard on the equipment.

So what? Smart people kept fixing all these problems. Not right away, not easily, but fueled by liberal doses of panic and caffeine, good work got done. When software crashed, coders rewrote it, and then the software crashed again but at least from a new bug. If the prototype door didn't fit, hardware engineers cranked up our computer-aided design program and designed a door that did.

When the box eventually shipped, it would need a user manual, which is where I came in. Since the technical writer who had hired me had moved over three cubes and become the marketing department, I had to write it alone. I read a lot of stuff I didn't understand and got in people's way. Engineers growled at my questions. I wrote pages and sent out drafts. Only a few came back, and the first one had "SUCKS" scrawled across the cover. Probably the only reason nobody fired me is because nobody had the time.

One of the biggest problems in documenting how the thing worked was the lack of access to a box. Not many existed and even fewer were working at any given time. Developing engineers and the testing department got the bulk of these units and guarded them jealously, since just about anything you tried to do to an early unit sent it into a tailspin.

Eventually the fledgling customer service department got some units and granted me access. Their new lab was a wide, 7-foot-tall telecom equipment rack crammed into a small room. The rack held four units, with loud prototype fans that constantly blew out heat. There was only one PC hooked up, and everyone wanted to use it. Pushy sales guys kicked off the people running the trials and anyone trying to learn the equipment. People constantly kept coming in the room to see if the equipment was free and hanging around pestering the current user to get off, like someone wanting to use the payphone to call their girlfriend. One time a shoving match broke out between a guy with an urgent deadline and a guy using the machine. As a neophyte tech writer, as low on the priority list as you can get, I only got to use the machine when everyone else went to lunch.

Eventually I got a user manual put together, and the engineers fixed enough of the biggest hardware and software problems to ship a first version of the product. A lot of technology makes it this far but dies in the marketplace.

Our box thrived. The Telecommunications Act of 1996 encouraged a host of companies to attempt to wrest phone and data services away from the incumbent Baby Bells, and investment banks, venture capital funds and the stock market filled the capital expenditure war chests of these challengers. As they raced to expand their customer base by laying fiber optic cable and turning up equipment, these upstarts shoveled out cash. Service providers, especially the newer ones, loved the low cost and easy installation of our box. Most of them had little or no legacy equipment and no long-term relationships with Nortel or Lucent to hinder the adoption of a new system.

Revenues ramped up faster than the most optimistic projections, and our customer list grew faster than any in the history of telecom. We became the most successful start-up in a white-hot segment of the technology sector and filed the papers for an initial public offering. But between the filing and the scheduled IPO, one of the largest communications equipment makers in the world decided they had to have us. They acquired our small but fast-growing company in the summer of 1999 for almost $7 billion worth of stock, by far the highest price ever paid for a private technology company acquisition.

Suddenly we were all rich beyond measure. But despite our talent, our product, and our success, we were not immune to larger economic woes. NASDAQ melted down, and our stock price fell to a fraction of its former glory. The same financial institutions that had thrown money at the new breed of service providers now saw a glut of bandwidth and no payoff for additional investments. Business got ugly, and bankruptcy filings by former hard-charging service providers, such as Global Crossing Ltd., 360Networks and Exodus Communications, began to fill the business pages. Even the relatively healthy carriers slashed capital spending, and all the telecomm equipment makers, including mine, had layoffs. Several people that had been part of my start-up were let go.

A close friend of mine, who followed my two-parts Homer Simpson and one-part Horatio Alger saga, is fascinated by the amount of paper wealth I made and lost. And with all the hype there has been about IPOs and 26-year-old millionaires, it is easy to think that the chance of making a lot of money is the sole reason to be part of a start-up. But I don't think it is. Our company made something from nothing. There were no scripts to follow and no backup plans if the enterprise failed. Someone just came up with an idea, and a group of people made it happen.

I made a million, lost a million, and I don't care. There is something quintessentially American about the adrenaline rush and excitement that comes with being part of a start-up. The experience is reward enough.

Jeff Beard is a technical writer at a large telecommunications equipment manufacturer.