Sex and intrigue on a Hearst yacht as Peter Bogdanovich probes the rot and glamour of old Hollywood. 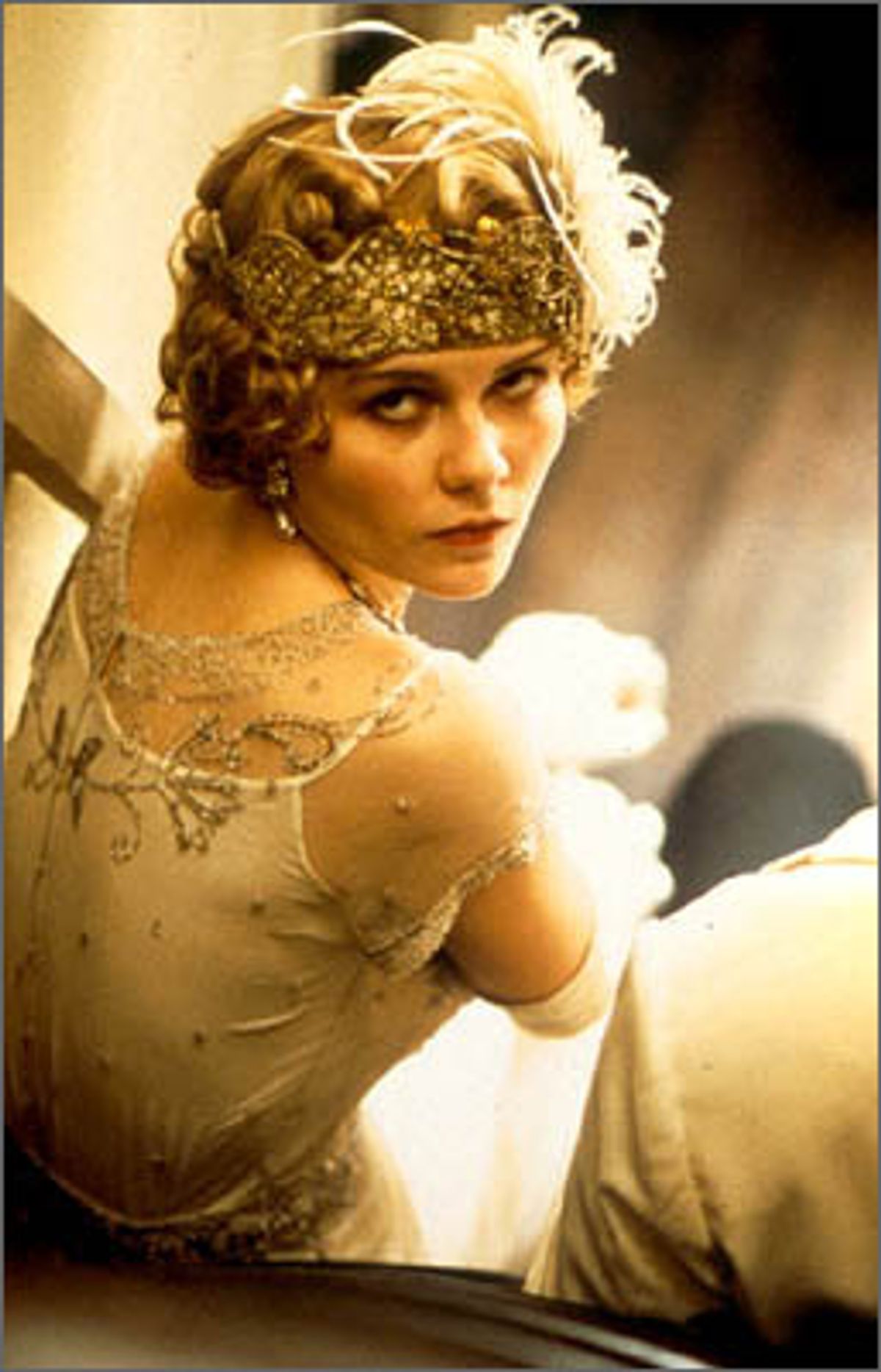 Whatever its faults -- and there are plenty -- "The Cat's Meow" is just about the only movie to give Marion Davies a fair shake. Davies is infamous in show-biz history as the former Ziegfeld Follies girl who became the mistress of William Randolph Hearst. She was the woman Hearst lived with until his death and for whom he built both a movie studio and the vast "Hearst Castle" in San Simeon, Calif., but she is far better known as a rumor or a joke than as an actress.

When Herman Mankiewicz and Orson Welles conceived the character of Susan Alexander Kane in "Citizen Kane" -- the no-talent singer who winds up as a barfly, not even a has-been but a never-was -- they were defining the public image of Davies that has predominated for 60 years. Others have followed suit, notably Tim Robbins in "Cradle Will Rock," where the characterization of Davies (played in that movie by Gretchen Mol) as a drunk gold digger is just one of the movie's tossed-off smears, so casual it's as if Robbins is saying she doesn't even deserve to be considered a real person.

The truth about Marion Davies is a lot more inconvenient. When Hearst's empire neared collapse in 1937, the so-called gold digger bailed him out by hocking nearly a million dollars worth of the jewelry he gave her. After he died, she moved out of San Simeon and sold her stock in the Hearst empire to Hearst's sons.

So it's odd that a movie that treats her decently is just as grounded in gossip. The plot of Peter Bogdanovich's "The Cat's Meow" has to do with the mysterious 1924 cruise upon Hearst's yacht attended by the likes of Charlie Chaplin, novelist Elinor Glyn, Louella Parsons and the producer Thomas Ince, who died a few days after the cruise. Ince's death has been the subject of speculation ever since, fueled by the fact that none of those present ever talked about it.

What possibly happened on that yacht is a great, juicy subject for a movie, one that has the heat of gossip going for it. Bogdanovich was probably aiming for something like "Sunset Boulevard," hoping to put the rot and glamour of Hollywood side by side on the screen. But if you've ever sat through one of Bogdanovich's costume pictures (like "Nickelodeon"), you know what to expect. "The Cat's Meow" plays like an idea for a scandalous masquerade ball rather than a movie. Bogdanovich is so tickled by his own naughtiness that he hasn't bothered to shape the scenes, and as usual, his sense of comedy is both antic and flat. (That's why Ryan O'Neal was the perfect Bogdanovich actor; he always thought that to be funny you had to act funny.)

The actors, for the most part, sink under the weight of their characters' rococo personas. Joanna Lumley, under a pound of pancake as Elinor Glyn, is like the cruise's sardonic funeral director. Jennifer Tilly's ditz routine is all wrong for Louella Parsons, the Hearst movie reviewer who, shortly after the cruise, signed an unprecedented lifetime contract with Hearst, forever raising suspicion that the newspaper magnate was buying her silence. Tilly doesn't find the connection between Parsons the dumb bunny and Parsons the calculated schemer who served as Hearst's most loyal lap dog and his most ferocious attack hound. The actors who do good work are sunk by Bogdanovich's inept direction. Eddie Izzard is physically wrong for Charlie Chaplin, stocky instead of diminutive, and his earthiness misses the cultivated hauteur Chaplin affected. But he does suggest the overweening narcissism of the man, the conviction that life owed him something.

The actor most hurt by the direction is Edward Herrmann as Hearst. Herrmann has the tycoon's ungainly awkwardness; he's a big man uncomfortable in his body. He plays his lumbering stature against Hearst's emotional insecurity. Herrmann does some very daring things, especially in the scenes where Hearst is heartsick because of Davies' imagined infidelity. The married Hearst, engaged in a scandalous relationship (his wife, who was a devout Catholic, refused to give him a divorce) was also keenly worried about his public image. That he loved Davies isn't in doubt. Neither is the fact that his attempts to make her respectable ruined her career.

Herrmann embraces that contradiction. He isn't afraid to appear pathetic, and he comes up with moments of neediness that feel almost too private to watch. But Bogdanovich, the movie buff, friend and confidant to Orson Welles, can't bring himself to show any sympathy for Hearst. To him Hearst is Charles Foster Kane, the powerful hypocrite who deserves whatever he gets. Herrmann winds up as little more than a character witness for a stacked jury.

Luckily, Bogdanovich can't do much to Kirsten Dunst. With her pearly, kiddish luminescence, those dimples and easy smile, Dunst gets the canny cheerfulness that Marion Davies radiated on-screen. When, dressed in a sporty sailor suit, she executes a little mock salute, she taps right into the spirit of Davies the wised-up cutup you see in her best movies. And there's no embarrassment in her most private scenes with Herrmann. She simply erases the age difference between them. The sight of the huge Herrmann attempting to bury himself in Dunst's slight, slim body, pouring out his fears as she comforts him, is touching. These moments are striking because in them, this couple is at last allowed to express their love for each other without ridicule.

If there were any justice in the world, "The Cat's Meow" would be the beginning of the rehabilitation of Davies' image. Film Forum in New York has already broken ground on such an effort, showing a festival of Davies' movies last spring. Part of the reason the public turned against Davies was the fawning over her pumped out by the Hearst publicity machine, the lavish coverage of her parties and the invariable praise of her movies. People got suspicious when they heard praise for movies they knew were duds.

Hearst, sensitive to his position as a married man living with his mistress, attempted to make Davies dignified in a series of stultifying costume pictures that the studio he built for her, Cosmopolitan Pictures, released through Paramount and then through MGM. The most telling scene in "The Cat's Meow" comes when Hearst screens scenes from Marion's latest costumer. The guests sit bored and respectful until Marion starts breaking up and pulling faces behind her director's back, and, laughing, they come to life. The pained, stiff look on Herrmann's face conveys the misguided love that did in Davies the movie star; you know this man thinks that when Davies makes people laugh, she's being ridiculed by them. (Hearst refused to let Davies take part in a pie fight in the 1928 "Show People," though she and the film's director, King Vidor, begged him to.)

Davies is charming in some of her costume talkies, the relatively lighthearted "Marianne" (1929) and "The Floradora Girl" (1930), though the hearty, family entertainment tone of those pictures makes them tough going. The production values that Hearst insisted upon weigh down her spirit, and you have to look elsewhere, like the 1928 silent comedy "The Patsy," to see what makes Davies so appealing; she's one of the most delightful screen comediennes I've ever seen.

Unfortunately, the evidence is hard to come by; of all her films, only "Show People" is available on video. But it's proof enough. It's also an inadvertent metaphor for her career, containing the happy ending Davies deserved in real life. In it she plays Peggy Pepper, a Georgia colonel's daughter who comes to Hollywood to be a great dramatic star. Thanks to the kindness of a bit player named Billy Boone (William Haines), Peggy stars in a series of slapstick two-reelers, where she's a hit. And it's no wonder. When Peggy, all curls and flounces, gets a spray of seltzer right in the puss, the gaping, gasping look of offended maidenhood on Davies' face has the zing of real surprise, the essence of a perfectly executed gag. (Vidor does an expert parody of a Keystone Kops sequence, in which Davies and Haines are chased in a wild barnyard sequence that at one point features Peggy bareback on a galloping sow.)

But Peggy still longs to be a dramatic actress, and when she gets the call from High Arts Studios, she reinvents herself as Patricia Pepoire. It's here that art eerily imitates life. Audiences and exhibitors reject her movies (as they did with Davies; Hearst lost an estimated $7 million on Davies vehicles), and, reunited with Billy, she reclaims her place as an audience favorite.

"Show People" must have been an unbelievable relief for the real-life Davies, giving her a chance to parody the sort of refined movies that Hearst wanted her to make while demonstrating her real talents. Davies executes a small tour de force in the scene where Peggy demonstrates "the emotions" for a studio casting director. Running through "passion" (closed eyes, cupid's-bow mouth puckered for a kiss), "joy" (eyes popped and huge, toothy smile) and "hatred" (eyes flaring as if someone has just goosed her), Davies skewers a bad actress's idea of great acting. When "Patricia" is interviewed by a flattering Hollywood journalist, Davies comes up with an expression -- fey, droopy eyes and upper lip curled as if she were attempting to suck a morsel of food from between her front teeth -- that tells you she was as bored by her prestige pictures as everyone else.

Davies sails through the movie like a daisy caught in a windstorm. She's enough of a sport to make fun of herself and smart enough to make the audience her pal as she's doing it. The only bad thing about "Show People" and "The Patsy" is the thought of what she might have done if Hearst could have let audiences love her for what she was. At the end of her posthumously published autobiography, "The Times We Had," Davies writes, "People got so tired of the name Marion Davies that they would actually insult me. W.R. [Hearst] thought he was building up a star. He saw me, in all his good faith, as an actress, or that I had the ability to be one. I hope before he died, he found out I wasn't. Still, I think he thought I was." That's the voice of someone who had been led to undervalue her own real talents by someone who, with the best intentions, stifled them. It's also the voice of true love. Damn it.