Is the pro-Israel media lobby losing its grip?

Polls show that the American public increasingly sees two sides to the Israeli-Palestinian conflict -- despite the best efforts of the neoconservative punditocracy. 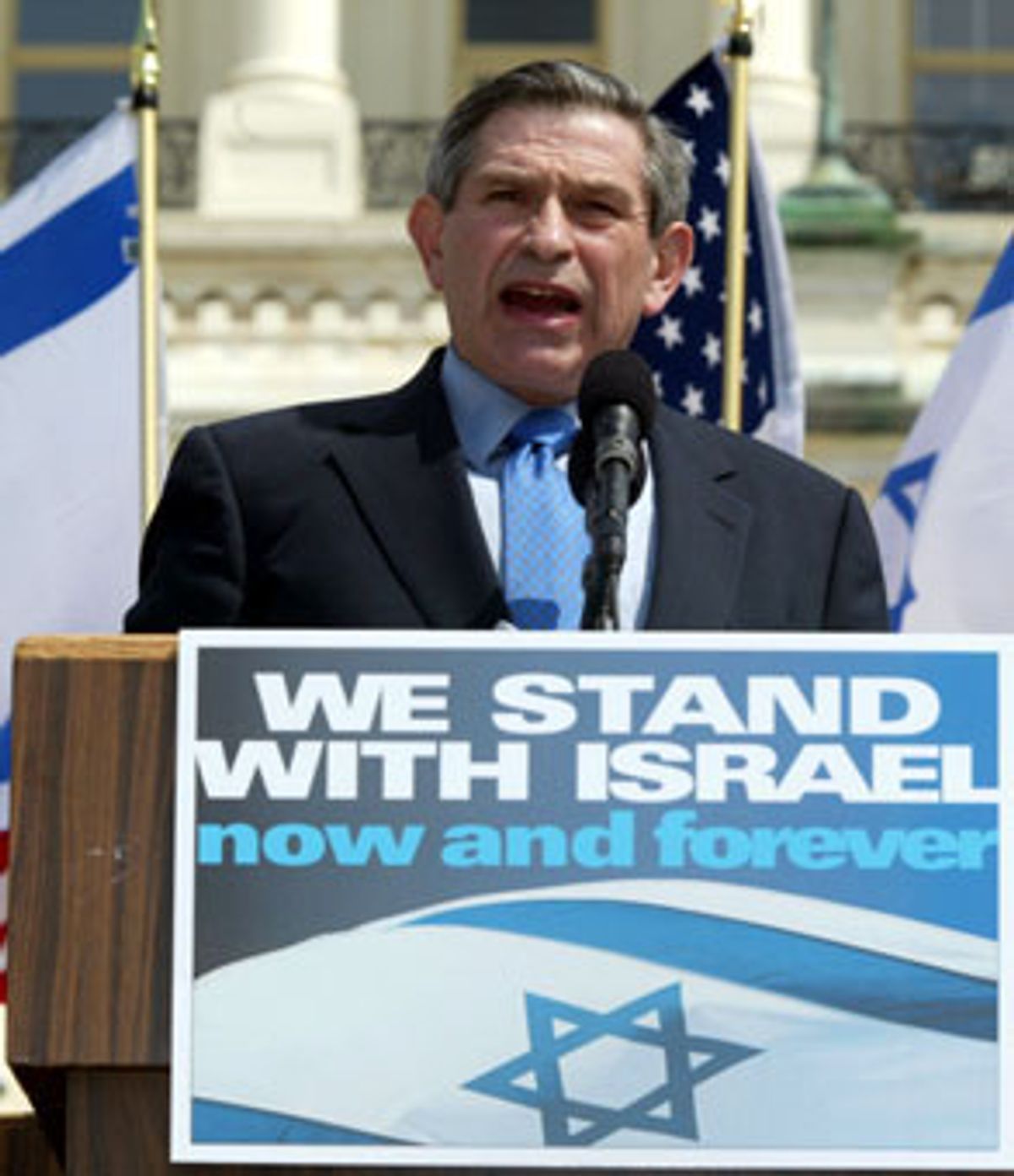 The current chaos in the Middle East has left partisans on both sides angry and bitter. Among the most frustrated, though, may be the pro-Israel pundits who have dominated the debate in the U.S. for decades.

Israel's aggressive incursion into the West Bank, in which 5,000 Palestinians have been arrested and hundreds killed, may mark a turning point in how the conflict is seen in the United States. Suddenly the pro-Israel media mantra -- that Israel's fight is America's fight, and that the two countries aren't simply allies, but brothers in arms with inseparable goals -- is being viewed with some new skepticism.

Polls show Americans remain strongly committed to Israel's security. Yet there's evidence that the nation's cadre of relentlessly pro-Israeli commentators, most of them neoconservatives, have quietly lost their corner on American public opinion. Instead of shaping it, they're caught chasing it.

Their media crusade to topple Iraq's Saddam Hussein, for instance, seems to be foundering, thanks to weeks of Israeli/Palestinian chaos. A majority of Americans told NBC/Wall Street Journal pollsters that an Iraqi invasion should be delayed until Middle East violence subsides. And other major national polls show that Americans increasingly question the premises of Israeli Prime Minister Ariel Sharon's incursion into the West Bank, Israel's most aggressive military operation in two decades, and how it will achieve peace.

Most of these same conservatives are coming off the high of the war in Afghanistan, when hawkish pundits backed the U.S. action with a full throat, spoke in perfect pitch with the White House's bellicose tone, and found much of their bloodlust matched by the American public. So their recent impotence has led to some unpleasant, and unusual, bitterness directed at President Bush.

On Capitol Hill, where the pro-Israel political lobby is considered one of the Beltway's most powerful, steadfast support for Israel remains the norm. But it was odd on Monday to hear the mostly Jewish crowd boo longtime pro-Israel hawk Paul Wolfowitz, now a deputy defense secretary, merely for suggesting at a Washington rally that innocent Palestinians hurt in the current conflict deserve some sympathy too. The crowd clearly opposed Secretary of State Colin Powell's peace mission, as well as President Bush's attempts to get Sharon to rein in his military operation.

The boos for Wolfowitz were a measure of how embattled many pro-Israel American Jewish hawks feel, especially given Bush's call last week for Israel to withdraw from the Palestinian territories "without delay" (a call, it must be noted, that Sharon has ignored with impunity). Clearly Israel's media lobby is not having the success it once did calling the shots in Washington and maintaining public support.

The dynamics could soon change, particularly if another wave of suicide bombers is unleashed. But for now, a Palestinian perspective that was once almost completely absent from America's mainstream press is being heard by Americans.

Make no mistake, recent polls show Americans still despise PLO Chairman Yasser Arafat, condemn the tactics of suicide bombers, and blame Palestinians for the current wave of violence. Yet they remain strangely open-minded about the Palestinian struggle and uncomfortable with Israel's West Bank invasion -- especially with Sharon's continued defiance of Bush after he called for Israel to withdraw its troops. News footage of the devastation of the Jenin refugee camp, broadcast widely on cable news stations Tuesday, may well shift public opinion even more.

It's already clear that an increasingly open debate is underway here about the Israeli-Palestinian conflict. It's a debate the conservative press has long tried to stifle. As Eric Alterman recently wrote at MSNBC.com, "For reasons of religion, politics, history and genuine conviction, the punditocracy debate of the Middle East in America is dominated by people who cannot imagine criticizing Israel."

You know who they are: William Safire of the New York Times; George Will, Charles Krauthammer and Michael Kelly at the Washington Post; Lally Weymouth of Newsweek; Martin Peretz of the New Republic; Daniel Pipes and Andrea Peyser at the New York Post; Peggy Noonan and Robert Bartley at the Wall Street Journal; William Kristol of the Weekly Standard; Mortimer Zuckerman at U.S. News and World Report; Morton Kondracke, Fred Barnes, Brit Hume and Tony Snow at Fox News; and William Bennett, a paid CNN contributor, just to name a few.

They still cannot imagine criticizing Israel. But others can. Conservatives could not have enjoyed watching pro-Israel advocate Daniel Pipes getting grilled recently by Fox News' self-styled blue-collar moderate Bill O'Reilly. In what until recently would have been considered an unthinkably aggressive stance regarding Israel, O'Reilly, who's made no secret of his suspicion of American Muslims post-Sept. 11, belittled Pipes' claim that the Israeli incursion into the West Bank was analogous to America's bombing of Afghanistan, took issue with his suggestion that 90 percent of Palestinians "want Israel destroyed," and pressed Pipes about what people were supposed to think when they saw Page 1 photographs of Israeli policemen clubbing peace activists in Tel Aviv. (Of course, Fox News also adopted Bush spokesman Ari Fleischer's suggestion that suicide bombers be called "homicide bombers," to make clear that they're killing others, not just themselves -- a case of pandering to the pro-Israel side that might counter O'Reilly's rare independence.)

Meanwhile, MSNBC's Chris Matthews, usually a fan of the mainstream's conventional wisdom, recently derided the claim that Arab leaders would privately welcome a U.S. action in Iraq, as "neo-con claptrap." Matthews has gotten increasingly fed up with uncritical defenders of Israel as well as proponents of an immediate Iraq invasion. Both O'Reilly and Matthews pride themselves on their scrappy, common-sense approach to politics, so their change of heart spells trouble for staunch defenders of Ariel Sharon.

Perhaps more worrisome for the Israeli media lobby is that, at least for the moment, it has lost some of its pull inside the White House. And worse, lost it to its least favorite Cabinet member, Secretary of State Colin Powell.

Just as the current crisis was unfolding, the Weekly Standard's Kristol, along with more than two dozen other conservatives, sent Bush an open letter advising him how to proceed. The letter suggested that the U.S. treat Arafat as a terrorist, that Bush give Israel unconditional support, and that he move ahead swiftly on his plans to topple Saddam Hussein.

To date, none of those recommendations have been embraced, which is why the Israeli punditocracy in America has been lashing out at the White House, washing its hands of Powell's trip and publicly ridiculing the administration. While there's some suspicion that Powell does not have full White House backing for his peace mission, the fact that he's there at all, meeting with Arafat, riles pro-Israel hawks in the press.

"Colin Powell's upcoming trip to the Middle East is bound to fail embarrassingly," read one recent Wall Street Journal Op-Ed column, by Reuel Marc Gerecht. "Powell's trip to the Middle East is shaping up to be a disaster," agreed Kristol at the Weekly Standard, even before Powell had set foot in Israel. "Bush is continuing the bankrupt policy of treating Arafat as a legitimate leader and seeker of peace," complained George Will in print.

Almost as bad for the neoconservatives was the fact that the Bush administration, led by Powell's State Department, altered its Middle East policy at least partly because of the chaotic unrest on the Arab street, as frustration over the Palestinian problem erupted into violence in capitols throughout the region.

That's anathema to neoconservatives who adopted the views of Princeton's Bernard Lewis and Fouad Ajami of Johns Hopkins, and spent months arguing that the Arab street was irrelevant ("a con" as Ajami put it) and ought to be ignored by the White House.

Elsewhere, the neoconservative media's demonizing of Yasser Arafat ("His behavior is increasingly reminiscent of Hitler in 1945," said National Review Online in one of its countless Arafat screeds), is producing only partial political success. Let's be clear: Americans don't like Arafat. According to recent polls, most doubt that the PLO president wants to achieve peace, and his minuscule approval rating in a CBS survey might actually be zero, since his 2 percent standing falls within the margin of error.

Yet at the same time, the vast majority, according to a Newsweek poll, don't believe Arafat controls the actions of the suicide bombers. The notion that the Palestinian leader could call off the bombings in an instant has been talking point No. 1 from the Israeli lobby and the conservative press for weeks, but they haven't convinced the public.

In poll after poll Americans continue to express steadfast support and sympathy for Israel's struggle for security. But if you venture beyond the generalities, cracks emerge -- cracks the conservative press has been unable to mend.

According to recent surveys:

There's more. Asked about U.S. policy toward Israel, more Americans (39 percent) told CNN they think we should "apply strong pressure to Israel to stop military actions against the Palestinians," rather than "actively support Israel in what it's doing" (32 percent).

In other words, just 3 out of 10 Americans subscribe to the neo-con approach of supporting Israel unconditionally.

Perhaps most surprising is the fact that nearly 40 percent of Americans consider the violence committed by Israel against Palestinians to be terrorism, according to an ABC News poll. The Israeli lobby's pundits have for weeks argued relentlessly that Israel is merely fighting terrorism alongside Uncle Sam. Yet 4 out of 10 Americans think Israel is conducting terrorism in the West Bank.

Right before Israel's recent military incursion, GOP pollster Frank Luntz was asked about the generally split public opinion among Americans regarding who's to blame for the unrest between Israelis and Palestinians. He told MSNBC's Matthews, "It was never this close in the past." He noted that American opinion "absolutely should have" turned more pro-Israeli at this point, and the fact that it hasn't must "be alarming to Israeli interest in this country."

The reason? "The poor response by the Israeli public-opinion machine," said Luntz. "The inability of Israelis to explain what is really happening over there."

Fox News' Morton Kondracke says the same thing, suggesting Palestinians are "doing a much better job of stating their case than the Israelis."

But the notion that Palestinian spokesmen -- who often speak English with clipped, occasionally unintelligible accents and inevitably have to explain or defend repugnant suicide bombers -- are outflanking a cadre of well-groomed Israeli representatives on the American airwaves seems to be a stretch.

In fact, there's evidence that Americans are seeing through the rhetoric of pundits on both sides, and viewing the Israeli-Palestinian conflict as a long-running, nationalistic battle for land, with plenty of blame on both sides, and one in which both sides will have to compromise to reach peace.

And that realization may be precisely what the pro-Israel media lobby in America most dreads.