Her imitators and her critics misunderstand how she sold books -- and why she's such a tough act to follow. 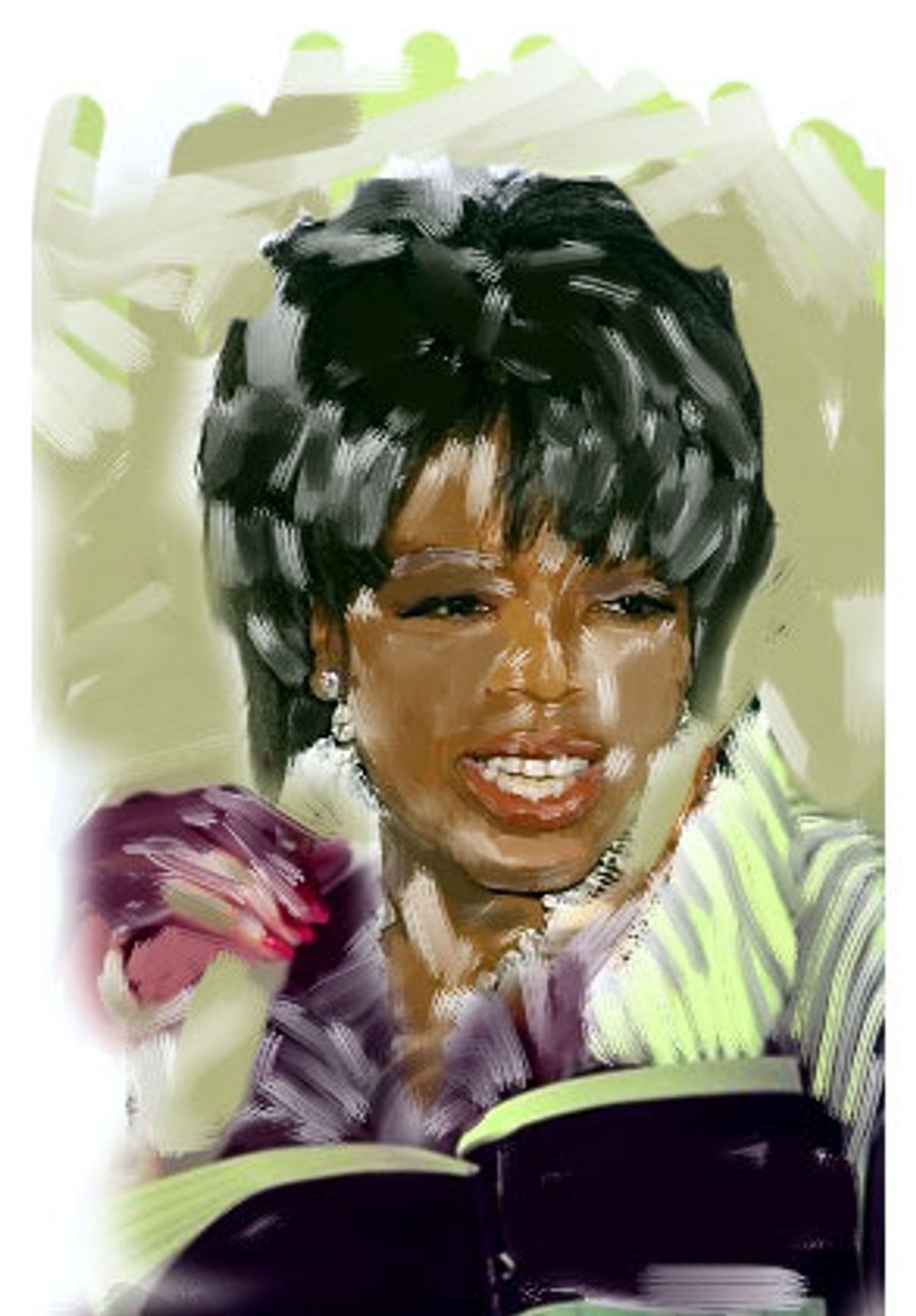 Since Oprah Winfrey announced two weeks ago that she's ending her television book club, some new players have stepped up to the plate hoping to beat her record in swatting authors onto the bestseller lists. USA Today has announced the launch of a book discussion that will take place both in its Life section and on its Web site, and in June the "Today" show will begin a club in which popular authors will invite viewers to read the works of "undiscovered" writers.

Both media outlets have sizable audiences, but it's hard to imagine either one matching Winfrey's influence on book buyers. Her power to bump up a book's sales figures by as much as a million copies (at the peak of her club's popularity) tended to confuse observers about the nature of the club itself. Despite its use of the broadcast medium, the Oprah Book Club worked according to an old-fashioned principle. Publishing savants have long known that word of mouth is the most effective way to sell lots of books, especially when those books are novels. The people who spend their money on fiction are mostly women, and most of them tend to try out new books and authors on the recommendations of trusted friends or booksellers.

Winfrey's book club represented a kind of supercharged word of mouth: In her case, the mouth reached 7 million ears daily. As juicy as that mass audience looks to an aspiring publisher or author, how Winfrey relates to her viewers has been as essential to the success of her book club as the simple fact that she's got their attention. Winfrey's core audience feels it has a relationship with her; if they tune in every day, they may spend more time listening to her than they do talking with their sisters or best friends. That relationship may be an illusion of sorts, the kind of phantom connection social commentators find so alarming, but nevertheless its effects are potent. Even people who don't really watch Oprah feel as if they know Oprah.

And maybe they're right. Winfrey may be a performer, but her job is to perform herself, and in selecting titles for her book club, she has always seemed to be choosing on the basis of personal taste. She's giving it up, she told the press, because "it has become harder and harder to find books on a monthly basis that I feel absolutely compelled to share." Anyone who reads new fiction for a living can identify with this burnt-out weariness -- the seemingly endless stacks of mediocre candidates to sift through as the pressure mounts to find an endorsable book. Rumor has it that the book club episodes of "The Oprah Winfrey Show" netted lower than average ratings for the program, so it's likely that Winfrey persisted with the club as long as she did out of her genuine enthusiasm for the books; when that enthusiasm flagged, so did the club.

Many, however, will be inexplicably happy to see it go. Heaping scorn on the canned uplift and soapy sentimentality of many of Winfrey's selections has become commonplace -- a cheap shot that allows the speaker to demonstrate his or her superior taste without requiring any expenditure of independent thought. I've read some Oprah Book Club selections: Some have been fine books, others have left me cold. But regardless of what I -- hardly a typical Oprah viewer -- prefer in a book, the novels Winfrey picked clearly worked for her audience members, who, despite some drop-off in club-related book sales in recent years, kept coming back for more.

The complaint, often made by literary critics, that Winfrey's book club was a Bad Thing because on average the books weren't "good enough" isn't ultimately that different from the protestation that the club was a Good Thing because at least it got people reading books. Both ideas are based on the belief that books are like moral vitamin pills that must be coaxed down the throats of a reluctant public at all costs. It's a peculiar, starchy notion -- why should reading, say, Nora Roberts novels be more virtuous than watching "The Sopranos"?

And why should reading the kind of highbrow, stylistically complex literary books that Winfrey never picked -- W.G. Sebald's "Austerlitz" or Ian McEwan's "Atonement," to use two recent examples -- be more improving than reading Roberts? I can't say that the well-read people in my acquaintance are superior in character to those who prefer thrillers, movies or sports. I'm not even convinced that sophisticated readers -- the ones who can recognize and savor the formal and technical achievements of a great writer -- have more significant encounters with the books they read than the often naive readers drawn to Winfrey's club -- the ones who care most about identifying with a book's characters and their experiences. Plenty of the "professional readers" (critics, writing teachers and scholars) I know mourn the days when they plunged into books with all their hearts, rather than at a critical remove.

Is it any wonder, then, that such experts often aren't very good at persuading occasional readers to pick up a book? Winfrey's choices were decidedly and unabashedly middlebrow. Like the old Book of the Month Club, like the quintessential middlebrow reader in fact, she sprinkled some literary titles among the less lofty works, but her choice never seemed to be dictated by an author's critical reputation. While Winfrey wasn't immune to the notion of reading as an elevating activity -- she favored inspiring books about women who overcome hardships, of course -- she presented books first and foremost as a source of pleasure. One reason Winfrey was so much more persuasive than those city-wide reading groups currently in vogue is that she said "I loved this book and I think you will too," not "You should read this book because it's good for you." In a society where most authority figures treat books like broccoli, she treats them like chocolate cake.

What's more, like any book-recommending friend, Winfrey had a track record, and a reputation to uphold. Simply put, she helped people who liked the kind of books that she liked find more of that kind of book. For this, she earned the venomous wrath of those who don't like that kind of book and thought that she should use her influence to promote the kind of books they liked instead. Yet if Winfrey had pressed "Austerlitz" or "Atonement" -- novels by writers' writers -- into the hands of her viewers, they would probably have found those books chilly and baffling. And they would have ceased to trust Winfrey's recommendations just as they've learned to ignore the average literary book reviewer. I love both of those novels, but I'm not under the illusion that even the most popular woman in America can get a fan of "The Deep End of the Ocean" to love them too. (The community of book lovers ought to be a big tent, and there's room enough for both of us.)

It's the very consistency, the distinct Oprah sensibility, of Winfrey's selections that made her club so successful. And the lack of that unifying sensibility makes it unlikely that either the "Today" show or USA Today will be able to replicate the impression, as Winfrey so effortlessly did, of being handed a book by an admired and familiar friend offering her fervent recommendation. It was Winfrey's endorsement, not the club format itself, that struck a chord with a large population of middlebrow female readers looking for new books to read.

Ask bestselling authors to present the books of "undiscovered" writers to the viewers of the "Today" show? Of course those authors will choose ostentatiously highbrow books in order to demonstrate their literary chops -- always a sensitive issue for commercial novelists. At USA Today, the paper's editors and critics will make the selections -- but as knowledgeable as those journalists may be, they're a faceless bunch compared to the woman whose ups, downs and tears we've all vicariously shared and whose tastes we know so well.

I'm hard-pressed to come up with a public figure who could fill Winfrey's shoes in this regard, yet I can't join with those who say she has a cultural responsibility to restart her book club. They are part of the books-as-broccoli contingent, whereas to me the great thing about Oprah's Book Club wasn't the books she chose -- to be honest, I'd probably hate more than half of them -- or the fact that she got people reading. It's that her book club had little to do with responsibility or duty or any other taint of obligation and moral hygiene. She did it because she enjoyed it, and the public spectacle of someone reading for fun -- that is, to be amused, thrilled and moved -- is a rare thing nowadays. To trudge onward when it's no longer fun would be a kind of travesty. If the thrill is gone, Oprah, then by all means have a rest. God knows, you've earned it.