Sandra Bullock faces off against homoerotic teenage Nietzscheans in a preposterously dull thriller. 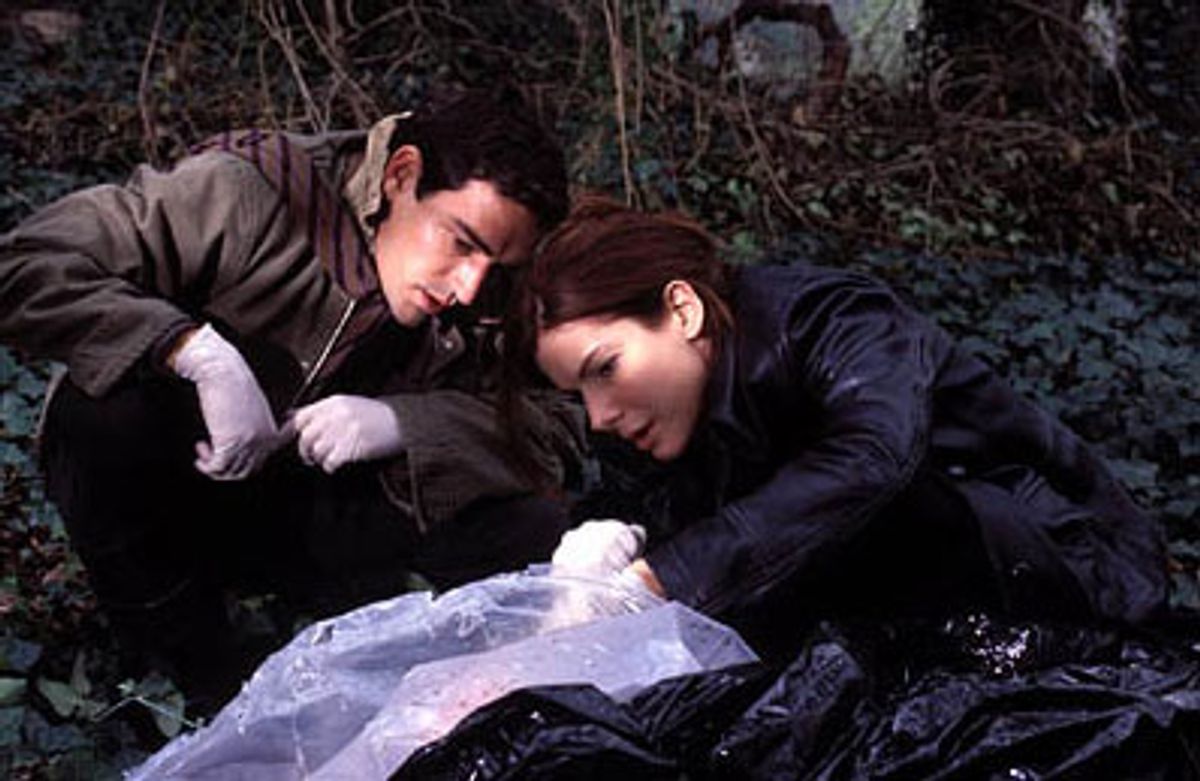 Somewhere on the north central south coast of California there's a small-to-medium-to-large town. It's a strange town, a town where a psychologically damaged female police detective will travel, entirely alone, to the scene of a violent crime in progress. And where this same borderline alcoholic but immaculately tailored lady cop repeatedly ventures into basements -- again, on her own -- where, shockingly, the lights don't work and threatening objects, animals and degenerates come lurching out of the darkness.

It's a town of suburban McMansions and mysteriously abandoned oceanfront villas, the former full of soulless yuppie parents and Nietzsche-spouting teenage psychopaths, the latter featuring crumbling decks where lady cops and teen wackos can wrestle hundreds of feet above the beach. It's a town where grumpy superior officers pronounce: "This case is closed! Closed!" And of course the plucky but scarred lady cop ignores them. Where two of the Nietzschean teenagers will kneel, eyes locked in pseudo-homo passion, and murmur to each other: "One cannot live fully without embracing suicide and crime."

This town, of course, is Movieville, and it only exists as the setting for unpleasant, phoned-in thrillers like "Murder by Numbers," which endeavors to turn the standard murder-mystery formula inside out but ends up making it even more boring and predictable than usual. My viewing companion suggested this should have been called "Movie by Numbers." The director of record here is Barbet Schroeder, a veteran of international cinema who's been responsible for some pretty good flicks, from the softcore "Maîtresse," way back in 1976, to "Barfly" and "Reversal of Fortune." Of course, Schroeder's track record also includes such Movieville snorebombs as "Single White Female" and "Desperate Measures," a movie I really can't remember even though it came out in 1998 and I supposedly saw it.

Wherever Schroeder was during the filming of "Murder by Numbers" -- getting some much needed sleep in a hotel room? Having suntan oil poured on his back by some young thing at St. Tropez? -- Sandra Bullock was in Movieville, here called "San Benito," playing the aforementioned stylish if traumatized lady detective. (Didn't they have a wardrobe budget for this movie? You get the strong feeling that Bullock showed up on the set in her regular clothes and didn't change.) Bullock's character is called Cassie Mayweather, which is a Movieville name if ever I heard one, and her tough-gal persona is defined by a set of bogus Movieville mannerisms: She jokes with colleagues about the size of her dick, she leaves beer and whiskey bottles around the house, she puts some unsuave moves on her partner, Sam (Ben Chaplin).

OK, the Sam-jumping scene is one of the few high points in Tony Gayton's screenplay. "It's not just about sex, OK?" Cassie tells him. "I really respect you as a person." But there's no real chemistry between Bullock and Chaplin, who has dreamboat eyes but whose acting technique, as usual, involves looking irritated about being in the movie. I suspect he'd rather be napping on the couch, or lecturing to undergraduates about John Donne.

Mind you, I'd be irritated too if I had a supporting role in this movie and had to stand around watching Cassie wrestle with the glaringly obvious secret in her past (which causes the soundtrack to erupt in bursts of atonal sound whenever she encounters a certain convict's file). I've never totally gotten Bullock's horsy, gawky appeal, but you have to feel for her as she gets whacked around by Gayton and Schroeder's erratic gear-shifting, from tough to weepy and back again.

Behind Cassie's dull psychodrama is a story, kind of. Like everything else here it's second-hand; partly we've got the infamous Leopold and Loeb case, complete with its semicloseted homosexuality, and partly we've got Dostoyevsky's "Crime and Punishment." Cassie and Sam are investigating the gruesome torture and murder of a woman, which she promptly identifies, based on no evidence I could understand, as a thrill killing by two depraved high schoolers. One of them is a spoiled rich kid named, um, Richard (Ryan Gosling, also the star of "The Believer," this year's much-ballyhooed flick about a Jewish neo-Nazi), and the other is a pseudo-romantic geek named Justin (Michael Pitt, whom you might call the budget-conscious filmmaker's answer to Leonardo DiCaprio).

This part of the story is also messy and unconvincing, but at least Gosling and Pitt seem to enjoy themselves. They stare into each other's eyes like suburban California's answer to Rimbaud and Verlaine, quarrel over Lisa (Agnes Bruckner), their implausibly libidinous shared girlfriend -- why are both female characters in this movie such horndogs? -- and generally try to fill up the empty spaces of "Murder by Numbers" with youthful energy. Gosling has some of the comic, sexy goofiness of Matthew Lillard's memorable performance in "Scream"; when he's trying to seduce Lisa or threaten Cassie, he's sinister and appealing and funny all at the same time. Pitt is all soulful intensity; he keeps you guessing about whether Justin is a sensitive intellectual, a manipulative creep or a little of both.

Unfortunately, since we know who committed the murder and why, the only remaining question is how: How did Justin and Richard throw the non-Cassie cops off the scent and how will she catch them? And will they, just possibly, turn their adolescent Nietzschean wrath against each other in a duel to the death? This premise could, just maybe, make for a decent thriller, but everything about "Murder by Numbers" is so flavorless and rote, so devoid of real suspense and human interest, that you never suspect for a moment that the answers are likely to be engaging. There's a single striking shot, when Luciano Tovoli's camera swoops across the dead woman's body in troubling detail, showing us her mottled skin in extreme closeup and finally fixing on the fiber evidence the culprits have planted. Schroeder showed up in Movieville that day. It's not nearly enough to elevate "Murder by Numbers" above, say, a B-minus episode of "CSI."