Pro wrestler the Rock and his oil-slicked pecs showboat in a poison-dart actioner -- some good, old-fashioned Saturday afternoon trash. 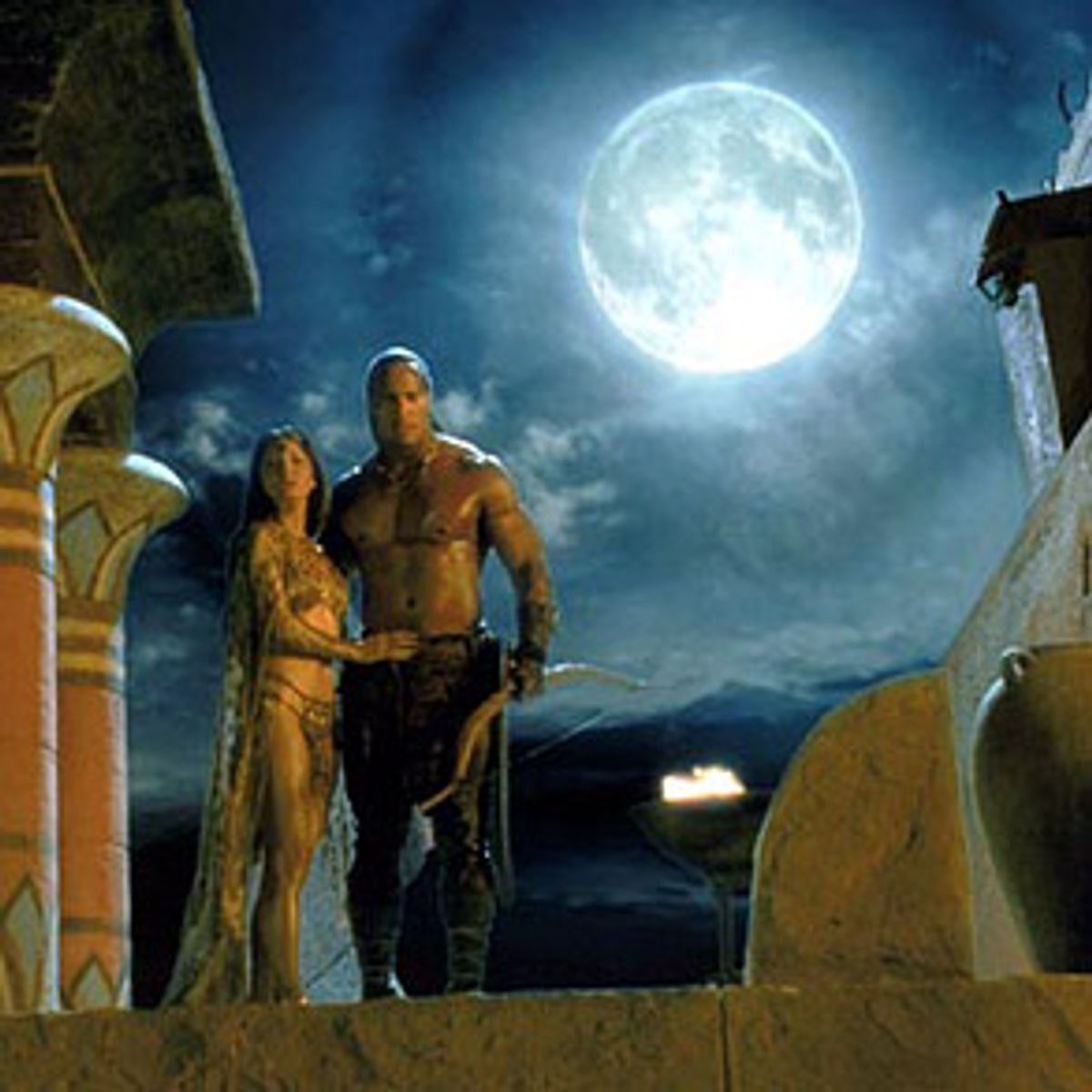 There's lots to look at in "The Scorpion King," starting with the upper bod of World Wrestling Federation star Dwayne "the Rock" Johnson: His plumped-up, oil-slicked pecs are so acutely defined they could jump off the screen and spin off into their own sequel. They're fascinating in a completely asexual way, probably because you can hardly believe Johnson is flesh and blood. He's like an animator's sketch based on a framework of geometric shapes, a walking daydream made of shifting, stacked trapezoids.

His costar, Kelly Hu, is stacked in a different way: She plays a sorcerer-princess with a taste for Paco Rabanne-style chain-mail bikinis. At the camera's first gander of her, the guys sitting in back of me turned into a pack of Tex Avery-style wolves; their eyeballs practically whacked me upside the head. Even the animals in "The Scorpion King" are superior specimens: The picture boasts the comeliest camel I've ever seen, a glamorous creature whose fluff has been pruned and permed to cream-colored perfection -- and with none of those unsightly, unidentifiable dingle-dos sported by your garden-variety movie dromedary.

Something happens in "The Scorpion King," but I can't for the life of me remember what. I vaguely recollect something about a mercenary warrior, also known as the Scorpion King (the Rock), who vows revenge on a tyrannical ruler (Steven Brand) and who, after grunting and sweating and dispatching an army of red-turbanned baddies, ends up winning the kingdom for himself, along with a sorcerer-girl bride (Hu).

"The Scorpion King" -- its script is credited to a motley crew including David Hayter, Will Osborne and Stephen Sommers, from a story by Jonathan Hales -- is a prequel to the opening sequence of "The Mummy Returns" (which Sommers directed). It tells the 100 percent true story of how one of the way-back kings of Egypt earned fame and glory before he was relegated to a dusty tomb.

But even though "The Scorpion King" looks, on the surface, trashier and more throwaway than "The Mummy Returns," it's a more entertaining and less aggressively frenetic picture. Director Chuck Russell ("The Mask") revels in the kinds of action sequences you used to see in the cheapie movies that once littered Saturday-afternoon TV. Poison arrows, quicksand, sexy harem girls, a giant gong that does double-duty as a shield: Russell's action-fantasy conventions whiz by like cheap, colorful darts. His action sequences are relatively clean in the way they're blocked out; you can usually tell who's coming from where -- which may seem elementary, but it's an art that's all but lost in contemporary action movies.

And although "The Scorpion King" is violent in the broad sense (people do get whacked in the head, jabbed with sharp objects and so on), it's not particularly graphic. The Scorpion King and his sorcerer hottie do get it on, premaritally, but Russell gives us only the vaguest outline of the deed: There's a little bit of skin-on-skin, followed by the equivalent of birds singing in the postcoital morning sunshine. (In today's movie climate, that's almost enough to get you an R, but miraculously, the grizzled grandpappies of the MPAA have given "The Scorpion King" a relatively reasonable PG-13.)

But "The Scorpion King" is less about sex, or even violence, than it is about pure iconic silliness. Cinematographer John R. Leonetti revels in the gleam of sunlight on well-greased skin, as well as the blinding brightness of sudden sandstorms and the garish gaiety of street bazaars. The movie's last image, of the Scorpion King and his queen outlined against a bright night sky, a full moon hanging delicately in the upper right-hand corner of the screen, approaches kitsch perfection.

The best way to enjoy "The Scorpion King" is to roll with its blatant anachronisms and "Conan"-style shenanigans. Much of the dialogue is dishwater-dumb, as when the Scorpion King's goofy sidekick (Grant Heslov, who just may be the Tony Shalhoub of ancient Egyptian adventure-fantasies) pronounces that the city they're trying to enter is "sealed up tighter than a crab's buttocks."

So why did I laugh anyway? "The Scorpion King," so far from perfect it isn't funny, is nevertheless one of those movies that catches you up in something bigger than yourself, namely, an archetypal desire to enjoy good trash every now and then. The Rock is in on the joke every step of the way. He knows he's got a magnificent six-pack, but he's smart enough not to let it do his acting for him. He's sly and charming and, perhaps wisely, doesn't say much: That's why it's so deliciously ridiculous when he teases Michael Clarke Duncan, a rival bruiser who becomes a reluctant ally, by calling him "miss."

And when all else fails, there's always the exotic beauty Hu, not to mention her curves. She has a great scene in which she thrusts her arm into a clay pot and draws out a hissing cobra, which she proceeds to jab in a bad guy's face. Hu plays the moment just seriously enough to make it menacingly sexy; it's doubly potent because, according to lore, she will lose all her sorceress powers once she has slept with a man.

But the cobra-wrangling sequence comes after Hu has done the horizontal hieroglyphic with her Scorpion King, suggesting that the power of their love has made her stronger than ever -- strong enough to tame a phallic symbol with her bare hands. Her secret? It must be that scorpion juice, flowing full-force into her being and making her feel like one hell of a woman. If you can think of a better way to spend a Saturday afternoon, I want to hear about it.