"The Triumph of Love"

This intelligent, breezy romantic comedy sings a love song to theater. Plus, there's a hunky lug and Mira Sorvino in drag. 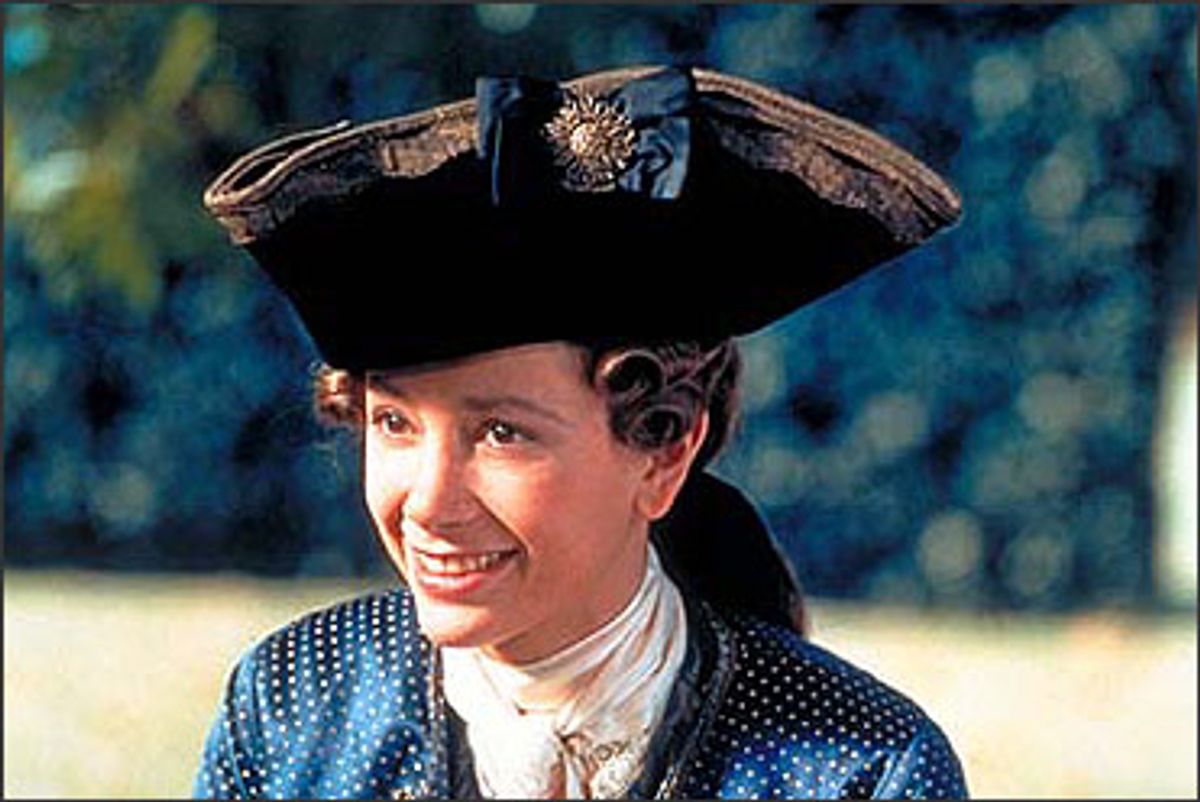 Clare Peploe's "The Triumph of Love" is the movie equivalent of a good summer dress: Shimmery and breezy, it lets just enough air and sunlight through. Based on a recent English stage production of 18th-century playwright Pierre Marivaux's "Le Triomphe de L'Amour," it's the story of a beautiful young princess who disguises herself as a man in order to win the love of a prince. You can judge that as either a classic setup or a corny one, but the only way to assess it fairly is to see what Peploe does with it. "The Triumph of Love" is a romantic comedy in the most conventional sense, but it's also a rhapsody about the tradition of live theater, and about preservation of the old ways by breathing fresh life into them.

Peploe gives mouth-to-mouth resuscitation to an old play in the form of a passionate, playful kiss. She both preserves tradition and shakes it up, reinvigorating it with lyrical energy. "The Triumph of Love" is a rallying cry against static costume pictures in which the camera lingers stuporously on every powdered wig and ruffle. That's exactly what you'd expect from a director like Peploe. Many moviegoers aren't familiar with her work, although they may know that she is Bernardo Bertolucci's wife. (Bertolucci is the producer of "The Triumph of Love," and he also shares a credit, with Peploe and Marilyn Goldin, for the screenplay adaptation.) But it's a mistake to assume that Peploe rides on her husband's coattails. Pictures like the 1987 holiday-in-Greece frolic "High Season" and 1995's strange and wonderful "Rough Magic" (with Bridget Fonda, Russell Crowe and Jim Broadbent) show the development of Peploe's own strong, clear -- if idiosyncratic -- style. Her pictures could, understandably, drive some normally patient and open-minded moviegoers a little crazy. She's the most gamine of moviemakers, given to telling a story in quirky fits and starts that can sometimes seem tentative or almost stiff. But once you get used to her style, it's easy to enjoy her coltish flirtations. Her movies can make you feel as if you're on holiday even when you're not, and they never require you to chuck your brains in the luggage hold.

In "The Triumph of Love," Mira Sorvino plays a lovesick princess who glimpses the fallen prince Agis (Jay Rodan), in all his buffed glory, as he emerges from a swimming hole in the countryside. She must find a way to win him. The major complication is that her family killed his parents so they could ascend to the throne; as a baby, Agis was smuggled from the prison where his mother was held captive. Now, as a young man, he lives in virtual isolation with a reclusive rationalist philosopher, Hermocrates (Ben Kingsley), and his spinster-scientist sister Leontine (Fiona Shaw), both of whom have taught him to despise the fair sex in general, and the princess (whom none of them has ever even met) in particular.

The princess does what any mischievous, self-respecting 18th-century royal maiden would do: She and her maid, Hermidas (played with rosy-cheeked charm by Rachael Stirling, who has a saucy spark similar to that of her mother, Diana Rigg), dress as boys and beg their way into Hermocrates' favor. The princess takes on the guise of Phocion, a serious young man who entreats Hermocrates to help him galvanize himself against the folly of love. Agis, starved for companionship, is instantly drawn to Phocion, and the two become fast friends.

That Sorvino is almost completely unbelievable as a boy is part of the point: Several of the characters see through her guise almost immediately, anyway. The fun is in seeing the way Sorvino adopts a woman's idea of masculine swagger, striding about with her legs slightly bowed and uttering confident, definitive and ridiculous proclamations in a voice a few shades deeper than her natural one. Sorvino has enough natural, inner naughtiness to make the role work, but when the tables are turned on her (as they always are in such comedies), she's able to reveal even finer, subtler layers. Her prank comes with a cost (at least temporarily -- this is a comedy, after all), and Sorvino makes us feel the weight of it.

Rodan, as Agis, is the movie's only lifeless presence: He's a lonely stud standing, bewildered, in a field of lively characters, but then it's pretty clear that's how Marivaux intended him. Phocion's feminine magic -- even when she's posing as a boy, she gives off the heady perfume of pure girlishness -- really goes to work on Hermidas and Leontine. Kingsley is loose and funny and sly, whether he's grumpily resisting Phocion's advances or, later, spontaneously singing a bittersweet love song in a pale, clear, touchingly awkward voice. And Shaw's Leontine is a marvel, the purest picture of spinsterly beauty drawn out of its protective cocoon not by love itself, but by the mere idea of it. She has the subdued, businesslike loveliness of a Monarch butterfly; her youthful, fluttery nervousness is both joyously funny and moving. When we catch a glimpse of her on a garden swing -- Peploe lifts the image from Fragonard -- she really does look younger than her years, transformed by the promise of romantic possibility.

Cinematographer Fabio Cianchetti shoots "The Triumph of Love" like a sunny summer ramble -- you walk away from the picture with distinct memories of almost mystically verdant gardens lit with velvety motes of sunlight. The picture feels bright and energetic and modern; even Peploe's stylistic eccentricities -- particularly the moments where she allows (or perhaps encourages) her actors to indulge in stagy dialogue -- feel like part of the movie's bold experimentation, rather than overt flaws.

"The Triumph of Love" is, of course, a play about adopting personas and disguises, about the interlacing of illusion and reality, which means that it's a story about why we gravitate toward dramatic performance -- whether in the form of a play or a movie or an opera -- in the first place. The movie's soundtrack meshes traditional chamber music with electric guitar from Pink Floyd's David Gilmour; it's a strange, intergalactic sound at first (are we traversing eras or solar systems or both?), but by the end it feels natural and right, an instance of two seemingly disparate styles meeting halfway and bleeding into each other.

Like Louis Malle's marvelous "Vanya on 42nd Street," "The Triumph of Love" is a play spread before us in cinematic terms. Which is to say that it seeks not to prove the superiority of movies over live theater, or even to blur the differences, but to preserve the fragile, fleeting spirit of theater in a way that's loyal and true. There is no real curtain in this open-air rendering of "The Triumph of Love," which is exactly as it should be. Peploe's movies don't come with heavy messages attached, but if "The Triumph of Love" has one, it's an affirmation that live theater, consistently threatened with extinction, stubbornly refuses to die. Hardier than we ever gave it credit for, it lives on any way it can. All the world's a stage, and that goes for movie screens, too.