Among the thousands of e-mails the Justice Department received about its Sept. 11 compensation fund were moving personal stories -- which may now face the federal dustbin 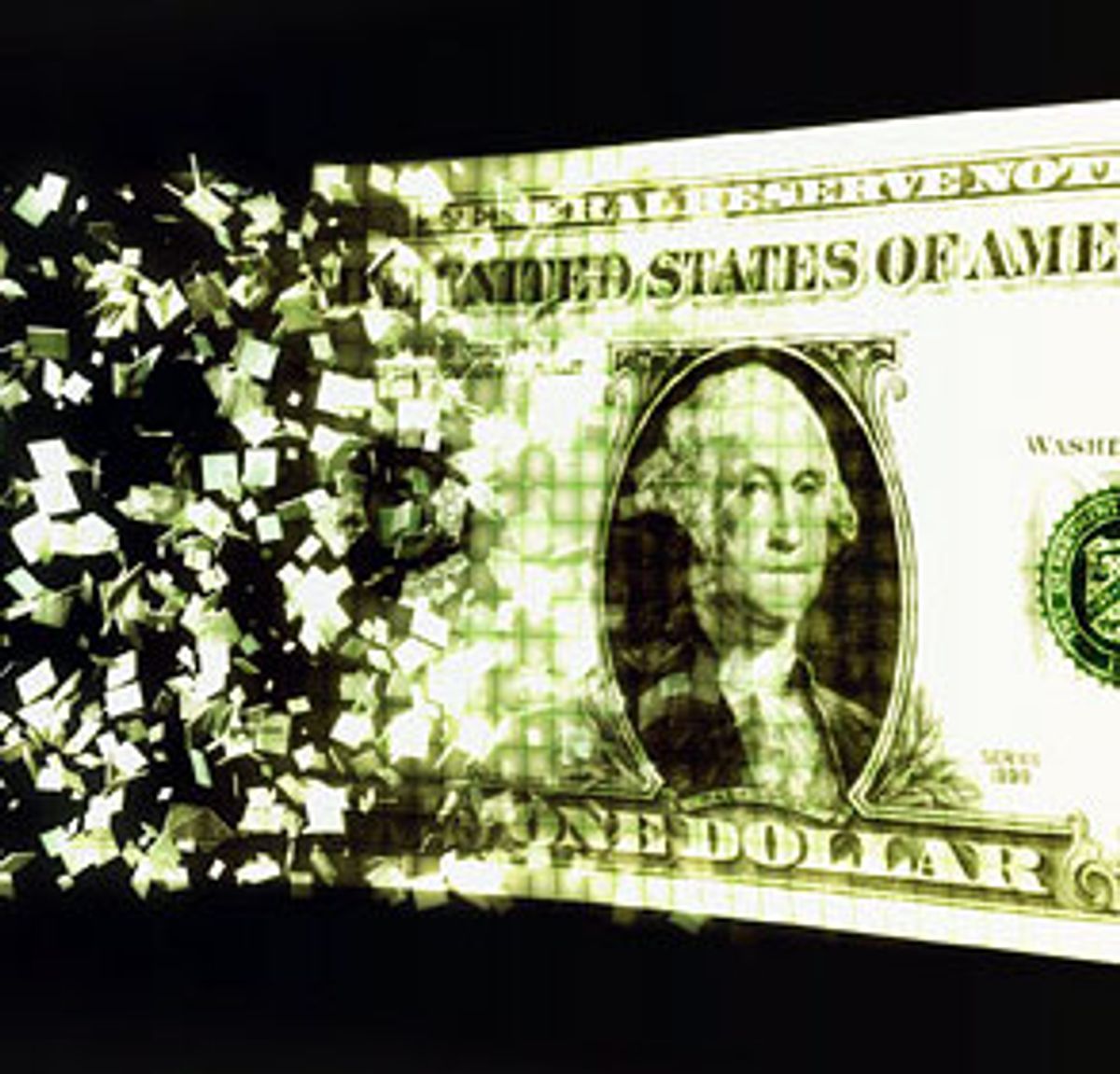 Many of the thousands of letters stockpiled in a small, sterile Washington office seek an answer to a fairly simple question: Will the federal government's Victim Compensation Fund cover them? Others come from angry citizens with their own bitter agendas, whether they think the fund is not paying enough ("Sometimes I think that if my daughter-in-law and granddaughters were to take advantage of what is being offered that it would be like compromising with the devil," wrote a woman whose son had worked for Cantor Fitzgerald in the World Trade Center) or that it shouldn't pay a dime ("The reality is that any one of these people could have been killed crossing the street that same day," wrote one).

The letters poured into the Department of Justice after the agency made a public announcement asking for responses to or suggestions about its plans to distribute the massive multibillion-dollar fund established last year by Congress to benefit the victims of the terrorist acts of Sept. 11 and their families. And among the pages is a seemingly endless amount of finger-pointing and recrimination. Some, following a campaign by Amnesty International, wrote to complain that domestic partners will not be covered by the fund, while one woman, identifying herself as the sister-in-law of a World Trade Center victim, was "outraged" at such a prospect and asked the fund to "show some respect for the American institution for legal marriage and for decent people with morals and strength of character."

But also among this unexpected archive of more than 11,000 e-mails are letters with a simpler agenda -- an attempt to make an emotional connection with someone, even a government bureaucrat. The enormous response, however, may prove too much for the Justice Department to handle. It's clear from the few people I spoke with during my visits to the reading room that employees there have reverence for the letters. But their fate has yet to be determined, and Justice spokesman Charles Miller concedes that they could end up being destroyed.

There's the 13-page tribute from a grieving father, "consumed with thoughts of [his daughter] being trapped in her office, or burning alive," complete with four pictures, two report cards and her last pay stub, dated "9/15/01." It's one of many poignant tales of grieving families, laid-off airline employees and financial workers, World Trade Center survivors and mysteriously sick rescue workers among the thousands of e-mails, letters and faxes overflowing a hundred or so fat black binders crowding a windowless, gray government reading room in downtown Washington.

The government posted most of them on the Internet, and when contacted, a number of these letter writers say they appreciate being given the chance to speak out. The e-mails streamed in until April 7, the deadline for feedback after the final compensation rules were released on March 7. The government posted most of what it received to its Web site, as long as the letters were "relevant and not defamatory," says Miller. However, it stripped the senders' personal information for "privacy reasons."

How many of them were actually read is a good question -- and not one Miller would commit a definitive answer to. The collection could be donated to the national archives, but that possibility has not been raised yet, an archive spokesman said.

The documents are housed in a conference room in the offices of Aspen Systems, a company contracted by the Justice Department, with only a small red Restricted Area sign suggesting that these mounds of printed-out e-mails are part of official government business. But don't try to pin down one of the employees of this unlisted legal-services office about what the company actually does. Even the secretary answers the phone with "document center," though the company's name, Aspen, is mounted in gold-plated letters on the front door. The Justice Department is Aspen's biggest client, and most of Aspen's employees have top-security clearances, so I'm not insulted when a bored and nameless lawyer is dispatched to baby-sit me as I leaf through thousands of letters, scouring for hidden gems.

One is from a lost firefighter's sister, who wrote from Bellevue, Neb. She explains how her father got a call from the New York City medical examiner's office on Christmas Eve after a long day at the recovery site, "but there would be no medical examiner to [sic] the next morning, so he returned on Christmas day with my mother to the morgue to spend a final Christmas with Keith."

Stephen Simone wrote about "the true matriarch" of his family, his mother, Marriane, who had worked for Cantor Fitzgerald in the twin towers. Cantor lost 658 employees working that day at 1 World Trade Center. "She came to Cantor to try and earn a living because she had recently become divorced and needed to support herself and her children. The minimal salary she received kept us afloat for many years as she struggled to keep her head above water."

He wrote that when he saw the fiery blaze from his office on Sept. 11, "I dropped to my knees in front of all my co-workers and bawled my eyes out. That image of the building collapsing is burned in my memory ... I recall walking aimlessly through Manhattan that day, walking downtown as thousands walked past me going uptown. I was scanning every face that passed me, hoping to see her beautiful face. But I never did."

Simone wrote in early, he says, because he was enraged at the fund's rules, and more important, he wanted to humanize his family's loss. "I wanted to somehow get across to whoever was listening that this is a person; she's not a number. She's not a capitalist. She was a woman who went to work to try to make a couple of bucks," he says with a sigh.

Some of the responses from victims' families neglect to even mention the federal fund. Ed Russin submitted a month's worth of personal and heartbreaking diary entries starting last December, all addressed to his son, Steven, who died in the World Trade Center attacks. The entries aren't posted to the Web but are included in the binders.

One entry, dated Dec. 6, 2001, reads: "Back again. I wish we all got a chance to start over. I was thinking of you as I was returning from lunch. I was thinking about the first time I heard someone call you 'sir.' I had always thought of you as my son. When the person called you sir I saw you as the adult you were. It is the same now. I see the little boy that we lost and the grownup Steven that is also lost. We have a few of your pictures on the dresser and I can look at the two of you before I go to sleep and when I wake up. I have done enough crying today so I will say goodbye." When contacted, Russin said: "Nothing I sent was critical, but I just wanted to explain how I felt ... how you grieve, how you always have the sadness." He has yet to receive any government response to his letter.

The large number of comments is not all that unusual given the topic, law experts say. All government agencies need to solicit public comment about how they should craft the language of newly passed laws. "It's really the heart of the legislative process, though we very seldom hear anything about it in the public domain," says American University law professor Bernard Ross. The more edgy a topic is, the more letters it generates. The Department of Health and Human Services is sifting through some 63,000 comments about a new law regarding the privatization of medical records.

However, the Department of Justice is not used to dealing with such an emotionally intense issue, says Jeffrey Thomas, a law professor at the University of Missouri at Kansas City, who has followed the compensation issue. What is most unusual is that the responses were collected via a Web site, allowing anyone to send a note with a swift mouse click. "It's unusual to attract such a broad spectrum of responses, but I attribute that to the Web, because people can browse and see that information available, and they just weigh in," Thomas says. Even if they're not familiar with the issue. E-mail has accounted for 80 percent of the responses, most of which are chatroom-esque. Among these are hundreds of one-paragraph notes ("This is bogus ... Stop the insanity.") and questions directed at the government ("What if it was your child on the 104th floor of Tower One on September 11?")

However useful they are -- or not -- many of the responses make amazing reading and offer insights into how September 11 has continued to plague Americans. Several victims and other e-mail posters said they found themselves reading the comments late into the early morning hours.

"At one point I think I had reviewed each and every one of those comments and printed quite a few of them out," said John Ehrlich, who lost his wife, Lisa, in the World Trade Center attacks. "Sometimes I was frustrated, because it was so clear a lot of people didn't understand what's going on."

Among the spam e-mails are a few hundred pages of postings from Vote.com, which submitted daily scoreboard reports on its unscientific polls of questions like "Does the government's aid program for families of Sept. 11 go far enough?" Not surprisingly, all the votes went in favor of the program's being sufficient. Vote.com chief executive Eileen McGann, wife of Vote.com president Dick Morris -- the controversial former pollster for Bill Clinton and others -- swears that the reports weren't sent to advertise her company, but to inform the fund's leaders of her voters' thoughts.

Among those who don't think the fund goes far enough is Michael Yau, an airline employee who wrote in because he lost his job after Sept. 11. He writes, "I have been forced to cope with the horror of that day, loss of my colleagues, and then the loss of my job ... Who is thinking and praying for all those people, including me, who have not been able to truly live their lives since that horrific, sad day. Please do not forget about us."

Others wanting to be remembered include Rose Oropallo, from upstate New York. She is a major in the Army National Guard and wrote because she fears her career is at risk since she can't breathe. Her lungs look as if she smoked three packs a day for 20 years, her pulmonologist told her: "I have never smoked a day in my life and went to ground zero, walking 10 miles per day without becoming short of breath."

"I wrote because I felt like no one was thinking about the military," Oropallo said. "We were there too."

Jennifer Liberto is a writer living in New York.