The Gumball 3000 rally: Yet another reason to hate the rich

Depraved rock stars and party-hearty Playmates in overpowered Toadmobiles are our betters, and as they careen across America we must bow before their power. 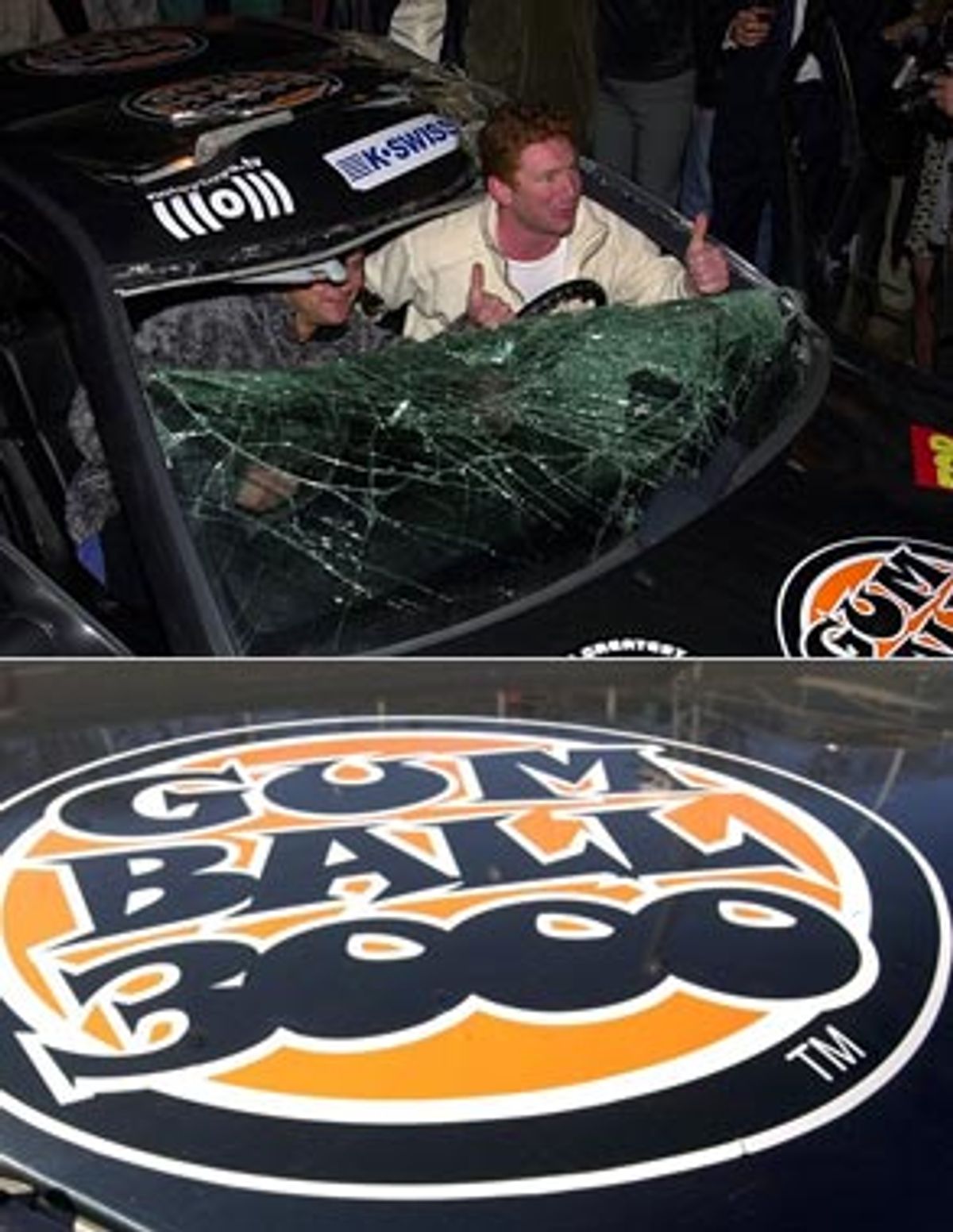 "Between Thurday April 25 - Tuesday April 30th 2002 the Gumball 3000 Rally will take part [sic] across the USA. ... From supermodel to rock star, racing driver to simple car enthusiast, the rally is a test of 3000 miles across the world's greatest Continent, [sic] punctuated by the wildest parties each evening!" -- From the Gumball3000.com Web site

I always enjoy hearing tales of the Middle Ages, those glorious centuries when the upper classes had so little regard for the humanity of the peasants and townspeople that groups of elegant, spirited aristocrats would don dark clothing and masks, saddle up their prized Arabian stallions in the middle of the night and ride through town with polo-type mallets, merrily clubbing the brains out of any poor, luckless buggers who happened to be in their way. "Har har har!" they must have cried, swilling aged brandy from jeweled casks as they toweled the blood from their gloves with the flaxen hair of petrified local virgins.

Ah, to be a powerful aristocrat, suffering no consequences for any actions, no matter how vile! Feeling no remorse or pangs of conscience whatsoever! Exercising the full extent of one's birthright to be an untouchable menace! What is money, after all, if one can't heartily enjoy buggering and impinging upon the rights of one's inferiors?

Such brazen flexings of financial muscle are rare nowadays, but there still remains one glorious event in which the very rich get to treat the rest of mankind like cabbages or skeet. This year, America is the lucky host of the 4th annual cash-ejaculating orgy known as the Gumball 3000 Rally. Since 1999, zillionaire scofflaws have been terrorizing cities across Europe and Russia in a weeklong burn down the roadways in the finest and fastest cars money can buy, speeding outrageously, fucking everything, spinning donuts, laying patches, binge-drinking top-shelf liqueurs, soiling the sheets of venerable Chateaux, crashing frequently and buying their way out of trouble every mile along the way with the haughty devil-may-care insouciance that can only be assumed by gilded dirtbags who regard a flaming Ferrari in a ditch as an amusing tax write-off.

"Har har har! Brigitta? Get my mechanic on the phone and tell him to have the Lamborghini ready for me in Munich. Here's another emerald thong-brooch for your trouble. Do pour us another round of gimlets from the titanium emergency bar. I say, what a hoot!"

The Gumball 3000 began in 1999 when young British entrepreneur Maximillian Cooper, inspired by the Burt Reynolds vehicle "Cannonball Run," conceived of an elite six-day car race across Europe as a "private party for 50 of his closest friends." According to the Gumball3000.com Web site, his "private party" just happened to achieve "immediate notoriety and a somewhat 'cool' status," presumably because Cooper leaked to the press that Naomi Campbell would be among the original participants. She wasn't, but it didn't matter -- the belligerent rich and their supercars were enough to attract a gaggle of other demi-celebrities, and a whole host of ultrarich bankers, nightclub owners, entrepreneurs, music moguls, minor sports stars and other car enthusiasts willing to cough up the 6,000-pound ($8,700) entry fee, drive 600 miles each day, then stay up all night drinking and do it again every day for six days.

Cooper, who appears on the Web site wearing tinted sunglasses and a red racing jacket, posing self-consciously Steve McQueen-esquely in front of a pair of Ferraris, told the London Times in 2000: "Gumball is about the mix of people we get -- you know, rock stars, racing drivers, models -- it's about the rock 'n' roll attitude."

Gumball's already obnoxious social cachet is only swelling now that it has been adopted by ultracool Johnny "Jackass" Knoxville, who devoted a whole MTV special to last year's race from London to Russia and back again, documenting horrible hangovers, contiguous pan-European vomiting and high-speed wrecks expensive enough to finance years of food for entire starving villages of large-eyed children surrounded by flies.

Other glitterati rumored to be participating this year are four former Playboy Playmates of the Year, wilting Hollywood machismo embodiments Nick Cage and Matt Dillon, tarnished waif Kate Moss, Caucasian soul-manufacturers Jamiroquoi and Fatboy Slim, and trend-spigot Spike Jonze, who is filming the whole thing for a feature film to be released next year, that more of the Great Unwashed might view the rarefied majesty of a bunch of superrich speed-worshipping douche bags gluttonously overgratifying their selfish and citizen-endangering urges, for no charitable cause or altruistic aim whatsoever.

This year's Gumball began Thursday, April 25, at 7 p.m. Eastern time, as gazillions of dollars' worth of priapic speed machinery roared out of the garage of the posh Plaza Hotel in Manhattan. The grotesquely indulge-o-tronic caravan will avoid as many speeding tickets as possible (and painlessly throw sweaty bricks of cash at the unavoidable ones) while openly flouting traffic laws and cruising their über-priced land jets at speeds exceeding 200 mph on its way to tomorrow's checkpoint in Washington, D.C. (The Web site piously says, "The 'Gumball 3000' rally is not a race, and if you break the speed limits you are likely to end up in jail!!!" "Har har har! Worry not your tiny blond head, Brigitta, everyone knows that only Negroes go to jail. Now part your thighs so I can see the windshield.")

They will then careen toward Graceland, threaten roads from there to the Grand Ol' Opry, then press hazardously on to the Santa Fe Desert Hotel, partying heedlessly all the while. From there, they hurtle en masse to a party with the Dallas Cowboy cheerleaders, then squeal off to a subsequent party in Las Vegas at one of Billy Richardson's hotels, before hopping back in their potentially child-killing machines to burn rubber, now half-blind with alcohol poisoning and sexual exhaustion, to the finish line at the corner of Hollywood and Highland, where they will collapse into a collective pile of cold sores, gout and other afflictions caused by ceaseless excess at the Hollywood Renaissance hotel. The after-party celebration is reportedly being held at the Playboy mansion.

We can only guess how many will die en route; how many daughters will be impregnated and hurled out of Bentley windows; how many empty Dom Perignon bottles will be flung with tittering derision at the jaws of befuddled state troopers, and how many Guns N' Roses-style hotel-room befoulings these millionaires will wreak on frightened and exhausted service personnel nationwide, who must clean up their dreadful and unsanitary messes for $6.50 an hour to provide milk and used blankets for their children.

I spoke to one of the participants at their launch party last night at the club "Lotus" in Manhattan's hip meat-packing district, while leaning against a Ferrari formula something-or-other that looked very important, with a lot of racing-type stickers on it. Doug Bauer, who holds some unspecified position of importance in the Legg Mason investment firm, is the driver of "the only Ruf R-Turbo One in the nation, probably." Bauer, who at 32 has the kind of glowing, innocent and walleyed child's face-on-a-man's-body that only the vampirically rich seem to have, says his car (which at $160,000 is the equivalent price of 8,000 child slaves on the black market) goes from zero to 60 in three seconds, and can get up to 225 mph. He believes he may be a contender for the "All Out Speed" competition to be held in the desert later in the race.

"One in every city," he remarked slyly, before excusing himself graciously to slide into a long black stretch limousine.

We can only hope that bright, rich young men like Doug and his ilk will have a compassionate awakening toward those less privileged than themselves, and eventually be driven to dedicate the Gumball to fund-raising for the diseased and palsied orphan infants of the world. Until then, I suppose we will have to content ourselves with the knowledge that these intrepid racers will extend every effort to provide temporary transportation for the topless hitchhiking schoolgirls of America.