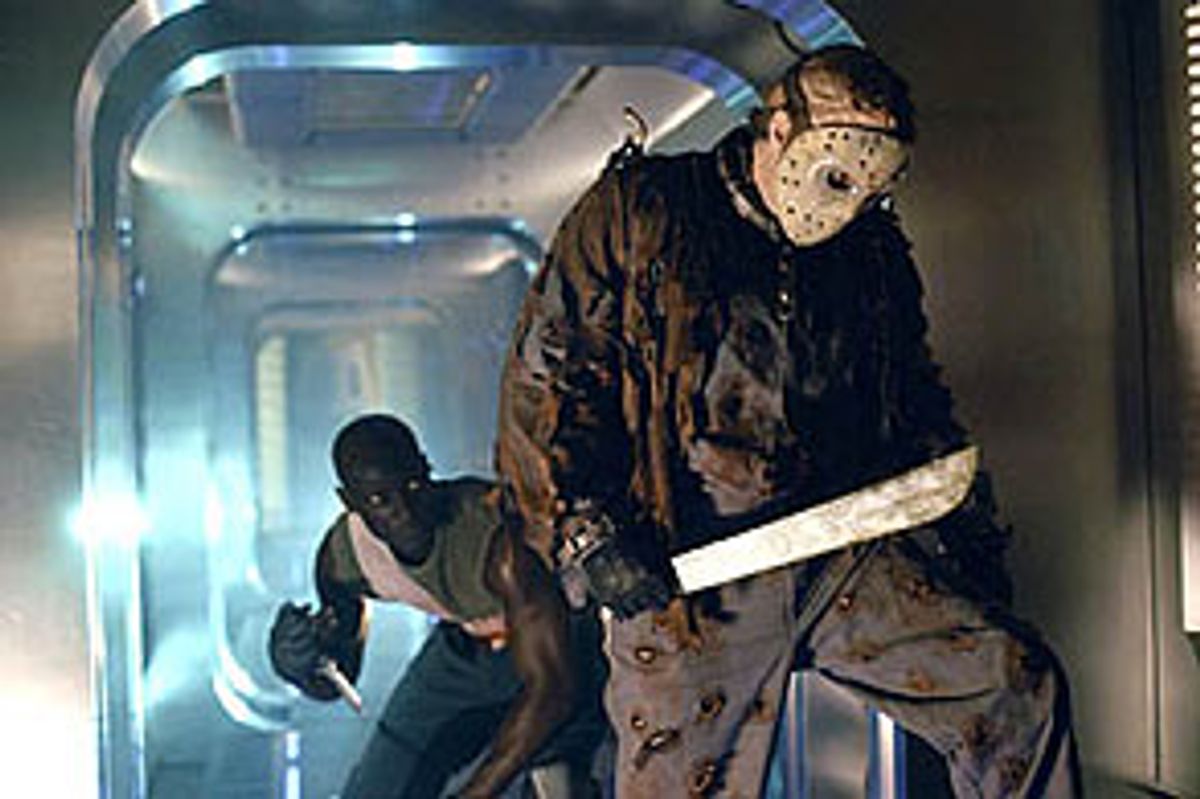 The "Friday the 13th" series, with its hockey-masked antihero Jason Voorhees and its endless procession of cut-up nubiles, is pretty much the unloved stepchild of the horror genre. It's never had the sheer cinematic style of the "Halloween" series, founded and occasionally revisited by John Carpenter, or the postmodern cachet and Grand Guignol wit of Wes Craven's "Nightmare on Elm Street" films. Silent, expressionless Jason (played here for the fourth time by Kane Hodder, who lends the murderous hulk an almost mournful quality) is a blank slate, and so are his creators. Some of the "Friday" films, including "Jason X" -- the 10th in the series but the first since 1993 -- claim to be based on characters invented by Victor Miller, co-writer of the first movie in 1980. Others don't even bother. You don't get the feeling anybody actually gives a crap, except, that is, for the horror fans by the millions who have kept Jason undead all this time.

If you are among that number, I have good news, sort of. "Jason X" is directed by Jim Isaac, a protégé of Canadian horror-meister David Cronenberg (who actually appears here briefly before his role is -- hyuk, hyuk -- cut short). As you'd expect, Isaac is a movie fan who works in references to everything from "Terminator 2" to "Blade Runner" to Andrei Tarkovsky's Soviet-made sci-fi epic "Solaris" (seriously!) and tries gamely to connect Jason's adventures in the 25th century to his long-ago origins at Crystal Lake, just outside Anywheresville in Your State. That's about where the good news ends.

Actually, if you stick with "Jason X" through its dreary and resolutely unscary setup and its hackneyed "Alien"-style plot -- in which Jason, awakened from his cryogenic stupor in a predictably foul mood, wanders through a spaceship dispatching bimbos and bozos of the future -- it gets much more watchable in the last half-hour. A previously boring character (Lisa Ryder) suddenly morphs into a kick-ass female android who baffles Jason with both her physical strength and her unquenchable moxie. As usual, Jason himself is vanquished and then semi-mystically reanimated, this time as a mechanical golem perhaps kin to T2, Darth Vader and the demonic giant metal lizard created by a mad scientist in "Godzilla vs. Mechagodzilla."

A hologram-simulation thingie even transports Jason briefly back to Crystal Lake, site of the primal scene that rendered him into such a tortured soul and planted that now-outdated Tony Esposito mask on his visage. A couple of simulated coeds show up to doff their tops and suggest a healthy round of beer, pot and premarital sex, which as we all know is what gets Jason going. This scene is genuinely funny and almost touching, suggesting that screenwriter Todd Farmer could have dispensed with the tedious spaceship plot and simply made "Jason X" a self-referential frolic, the "Friday the 13th" series' answer to "Wes Craven's New Nightmare."

Sure, that's been done. But everything else "Jason X" tries to do has been done too, and generally a lot better. I admire Isaac for his willingness to stretch the series' frame of references, as well as his desire to show us a balding professor (Jonathan Potts) in a lacy pink teddy getting his nipples twisted with a pair of tongs. (Are these the same tongs used to scoop out Jason's centuries-old goopy eyeball or not? I'm confused about that.) But he's no good at all at conveying any sense that time has passed -- let alone 450 years -- or any feeling for the spaceship's internal dimensions, except that it's big and dark and full of Jason.

Rowan (Lexa Doig) is some kind of special agent who got accidentally frozen with Jason sometime back around 2000, but when she wakes up from her nap not much has changed: She was a hottie then and she's a hottie now; the midriff-baring, gel-coiffed crew around her is more interested in making the sign of the three-humped space dromedary than in confronting the fact that the immortal killer of Crystal Lake is now defrosting among them. ("I bet he's hung like a mammoth," one girl opines.) Coursing hormones act, of course, as smelling salts to prudish Jason, that ever-vigilant enforcer of William Bennett-style values. But Rowan, who seems meant to play Sigourney Weaver to Jason's monster (the spaceship is called the Grendel, for those of you who remember freshman English) never adds up to more than a cute figure and a crinkled brow.

Occasionally the wisecracks in Farmer's screenplay hit home, and the impalements Jason inflicts on his victims run the customary gamut from grotesque to ridiculous. (One tough guy, to Jason, after being stabbed: "It's gonna take more than a little poke in the ribs to put this old dog down." Another stab: "OK, that oughta do it.") If the magical simplicity of Jason's character makes him a little boring, it's still the secret of his longevity: He doesn't want to sing or dance, or take off the mask and cry with Katie Couric. He just wants to punish you for that thing you did with you-know-who out at that place. Eighteen years after "Friday the 13th: The Final Chapter," and nine years after "Jason Goes to Hell: The Final Friday," he's not done yet.