Sure, she was scary-skinny and her skirts were too short. But don't blame the unfiltered neuroses of "Ally McBeal" for the crisis contemporary women (and men) face. 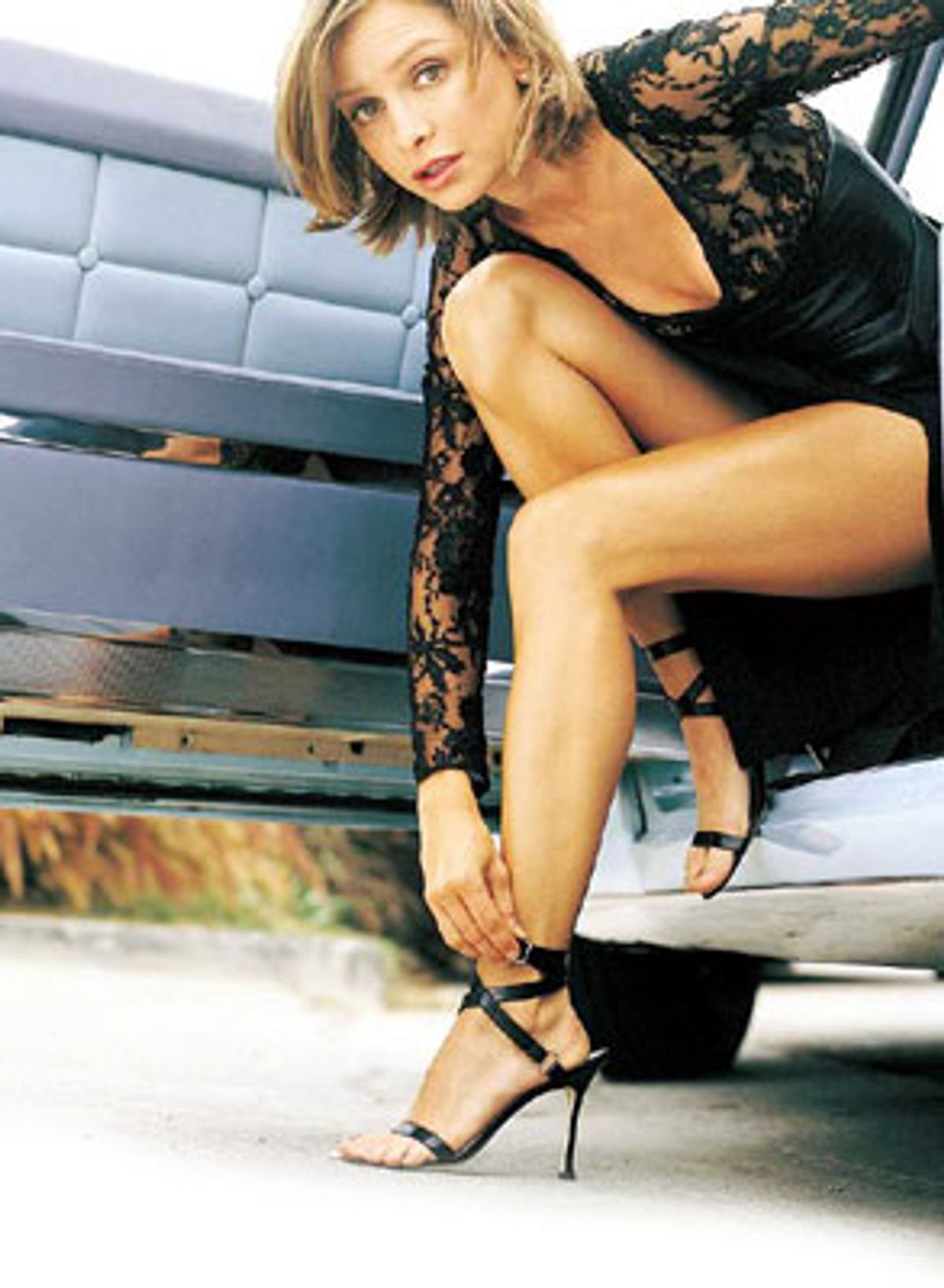 Poor Ally McBeal. Off she goes, slinking past a volley of critical abuse on her way to oblivion (or syndication). She's got her sunglasses on, a magazine hiding her face. "Give us a pout, Ally!"

When Fox announced the imminent cancellation of "Ally McBeal" two weeks ago, the news precipitated a flurry of gleeful, gloating postmortems. The New York Times' Anita Gates was doubtless speaking for a horde of critics and viewers when she wrote on Sunday that "the news that her namesake one-hour comedy series won't be back next fall after five seasons is sort of a relief. Take this woman off television. Please." You could just see the people crowding outside the palace, calling for Ally's head on a stake, then realizing that Ally's head on a stake would look no different from Ally's head on her body, then cackling and pitching a few tomatoes.

"What 'Ally McBeal' represents," Gates wrote, "is an absurdist view of the nightmare that some men predicted a few decades ago: You let women into the courtroom -- or the newsroom or the Capitol Building -- and things will never be the same. Sure, 'Ally McBeal' is a comedy, but I've never felt it was laughing with me."

It's a valid point, save for the fact that Ally's co-worker, the impossibly neurotic, nose-whistling, tree frog-loving, hole-dwelling, mariachi-singing Porky Pig-voiced John Cage, was also meant to pass as a brilliant lawyer (while the conventionally slick and reptilian Richard Fish was not) and was never confused with a symbol for men in general, or single men in general, or single men in the city in general. Still, Gates' opinion jibes with the dominant, politically sanctioned view, epitomized by the are-they-serious? headline that accompanied a photo of Ally on the cover of Time magazine a few years ago. "Is Feminism Dead?" the magazine asked, in a way that left little room for equivocation. If so, it implied, Ally had killed it.

It's easy to prop Ally up as a straw woman and take her to task for her fly weight, her vertiginously short skirts, her bad love obsessions, her repetitive behavior patterns, her uncontrollable impulses (she once tripped a woman in the supermarket to get at the last can of Pringles) and all the other tics and insecurities that characterized her. Not surprisingly, this view of Ally as feminism killer is popular. A week earlier in the Times, Ginia Bellafante pointed out that although Ally predates flawed, addled, romantically obsessed heroines like Bridget Jones and her endless parade of imitators, we eventually grew tired of her and blamed her for the whole irritating invasion. Ally may have been an original once (this argument goes), but she quickly became a type. As Bellafante wrote: "Ultimately, her trademark neuroses became Ally's downfall. Her internal dialogues were too many; she made happiness too elusive; her narcissistic torment became too grating to watch. At least 'Sex and the City's' Carrie Bradshaw understands what a few good confidantes and a new pair of shoes can do for serotonin levels."

It's all true, of course (although it says something about the times we live in that boosting one's re-uptake with a pair of $700 Manolos is somehow more laudable than a tendency toward brooding introspection). Among other things, Ally was a depression artist, a poster girl for Prozac if ever there was one. For a time, she was touted as the "new woman," then she was castigated for just being another version of the bad, old woman. Ally had a gift for self-inflicted misery that rivaled Emma Bovary's. She trudged through the streets like an underfed calf to the slaughter, trench coat moodily cinched around her X-ray body. She called in "old" on her birthdays. She pined for years for her ex-boyfriend Billy, while continuing to work side by side with him and his beautiful wife, Georgia. She obsessed over the baby she might never have. Defying the holiest of self-help axioms, Ally refused to live in the moment, uncomfortably straddling the past and the future. "My life has always been about tomorrow," she once told her therapist. "The idea that life is now is horrible."

Something about all this Ally bashing is unnerving. It's unsettling to see how few, if any, farewell-to-Ally pieces have been written by women that do not emphatically put a disgusted distance between themselves and the skinny, nervous ditz in micro-minis. (Entertainment Weekly's Nicholas Fonseca was far kinder in his send-off than the two New York Times writers.) Ally may have pioneered the now stale girl-in-the-city genre, both on television and in fiction, but this doesn't really explain why all these stories consistently get lumped together and dismissed.

Nor does it explain why each of these characters should bear the weight of gender representation on her scrawny shoulders. In fact, save perhaps for what has been called "the Nick Hornby man" -- a feckless, idle, noncommittal, eternal adolescent -- there is no male equivalent in the popular culture of this class of fictional womanhood so utterly lacking in gender consciousness, this "lumpenfeminitat," to coin a phrase. Yet Ally's male co-workers were as consistently neurotic, flawed, vain and self-absorbed as she was. So what are we supposed to conclude from this? That the modern world has not altered them at all? That the boys are all right?

Ironically, "Ally McBeal" gave us Fish, an unrepentant womanizer with a thing for hiring impossibly beautiful lawyers and then hitting on them, whose big dramatic moment will probably involve the thunderous occasion of his finally meeting his love match in the nefarious Eliza Bump (recent guest star Christina Ricci). It also gave us John Cage, the lovable but emotionally stunted dork, who is as neurotic and damaged as Ally, if not more so.

And, of course, it gave us Billy, resident "nice guy" and the love of Ally's life (until Robert Downey Jr. came along), who was not exactly deserving of the honor. After all, Billy and Ally, childhood sweethearts, didn't just break up. Billy unceremoniously dumped Ally after meeting Georgia at a party and quickly marrying her. And unlike Ally, Billy got off easy (although, after he also ran out on Georgia, the show's producers swiftly smote him with a fatal brain tumor). "Ally McBeal" served up these characters in equal proportion; it was up to others to parse and categorize them. No one, for instance, put Richard Fish on the cover of Time magazine and asked, "Is Chauvinism Alive?"

Ultimately, it has always seemed to me that "Ally McBeal" was neither a comedy nor a drama but an allegory about modern urban life and the noxious dreams that thrive there. What was the law firm of Cage, Fish and McBeal, anyway, if not a sort of "Animal Farm" for the lonely urban professional set? The cases Ally and her colleagues took to trial often hinted at a seemingly pandemic longing on the part of their clients to have order imposed on the chaos of their emotional lives, to have their dreams legally enforced in the wake of their disappointed expectations.

When clients sued on "Ally McBeal," they did so to try to bridge the emotional distance between them and others, especially those they loved or used to love. How else to explain the parade of cases in which women sued their husbands for leaving them, men sued their plastic surgeons for causing their lovers to leave, men sued rock stars for arousing feelings in their wives that they themselves would never be capable of arousing, and lawyers filed class action suits against phone company telemarketers because the phone kept ringing all night and it was never him?

In fact, the show might have been better had it forgone the fantasy sequences that telegraphed these emotions and turned them into sight gags. After all, Ally was never much more than a neat sum of all female neuroses, an unchecked id run rampant. The things Ally and her colleagues blurted out in meetings, on dates and in court were precisely the sorts of things most people strain to repress in meetings, on dates and in court. As if playing a part in a Greek play, Ally expressed and acted on everything that she thought and felt. There was no psychology mediating her impulses at all.

Fantasy permeated all the characters' lives and made real life seem paltry by comparison. Characters like Ally, Cage, Elaine and Jenny always seemed to lack a membrane between their outer selves and their inner lives. Those who didn't -- Nelle, Ling, Fish, Eliza -- seemed to lack an inner life entirely, or at least anything one might call a soul. In this way, "Ally McBeal" played like an extended anti-fantasy public service announcement. ("Dreams destroy dreams," the tag line might have read.)

Maybe we were never meant to take Ally -- or her colleagues -- at face value. Rather than sport an individual personality, Ally simply embodied certain ideas about late 20th century living, personifying such existential abstractions as loneliness, regret, longing and melancholy, just as, in the medieval morality play "Everyman," the characters personified "fellowship" or "good deeds." But Ally also emphasized the tensions between those ideas and her own will and desires. As she told her newest boyfriend Victor, after he rather vengefully bought her a ticket to Detroit so that she could go "resolve her issues" with her ex-boyfriend Larry, "This mess is my life."

Poor Ally. She's been consigned to a type, dismissed offhandedly as a grotesque mutation of what postfeminist womanhood should have been. It's easier to blame her and characters like her for making us all a little uncomfortable than it is to take a look at the compendium of toxic notions that women are asked to filter daily, and wonder how they manage not to choke. After all, that dancing baby was never more than a hologram -- a mocking, ugly one at that. And it's not like she didn't know it.