Thy tight buns are like a red, red rose 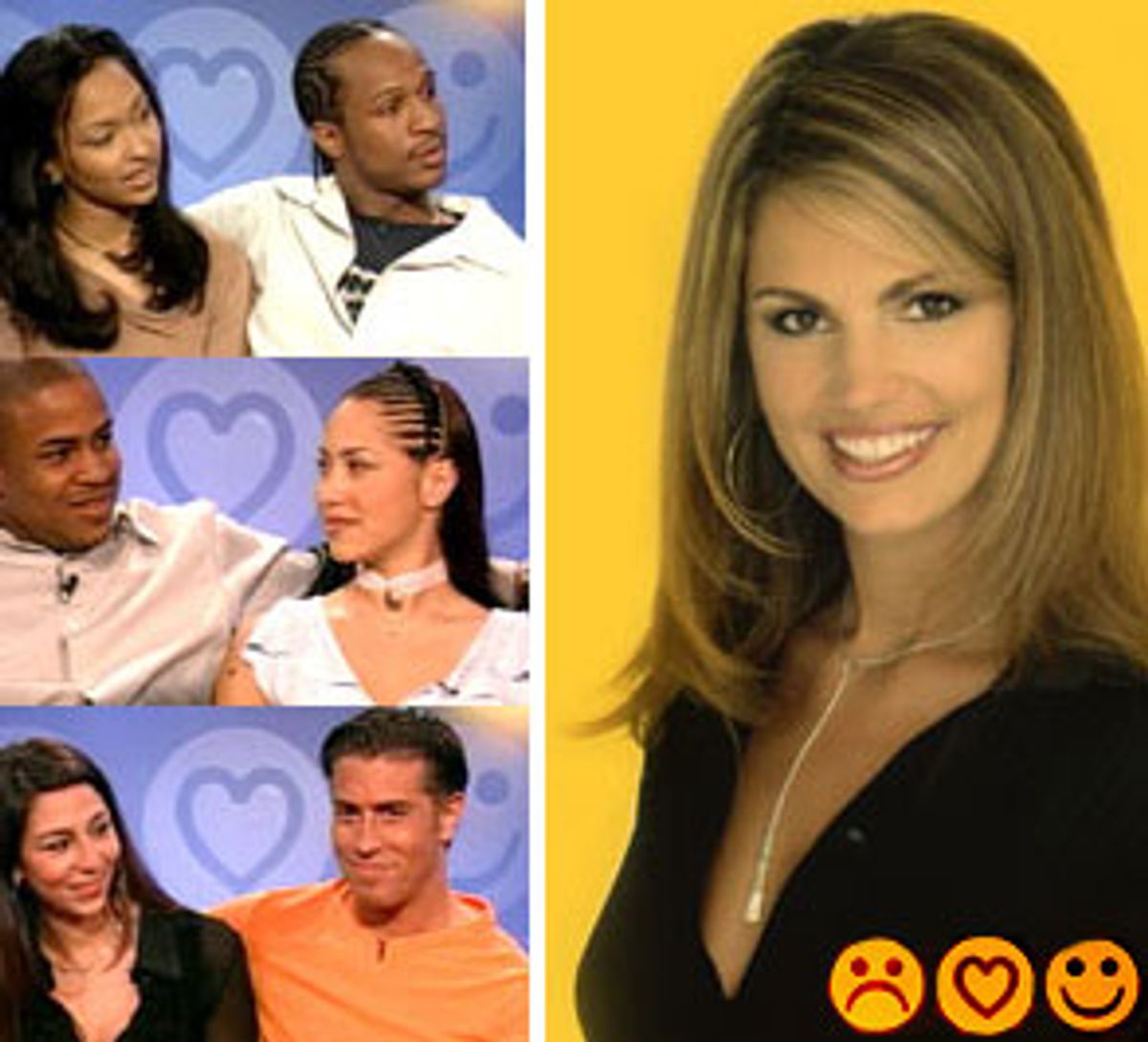 In the past couple of years, "dating shows," those bizarre talk show/game show hybrids featuring lots of cleavage, cattiness and sexual humiliation, have sprouted like weeds on the manicured lawn of -- well, anyway, on TV.

Though relatively new, the dating show is now officially a phenomenon. After ruling supreme for 25 years, "The Dating Game," that sui generis grandpappy of the kiss-and-tell (or, in this case, tell, then maybe kiss later) genre, has been unseated by upstarts. Today, anyone looking to get a fix of scantily clad youths groping, licking, ditching or bitching at each other on camera can take his pick of "Blind Date," "Elimidate," "Change of Heart," "Taildaters," "The Fifth Wheel," "Shipmates" or "Dismissed." Add to this list such dating show miniseries extravaganzas as "Temptation Island," "Chains of Love," "The Bachelor" and "Love Cruise" -- all gone now, but surely not forever (ABC is getting ready for "The Bachelorette" as we speak). Don't forget the occasional one-night-only pageant spectaculars such as "Who Wants to Marry a Millionaire" or "Who Wants to be a Princess" -- the type of show that used to be known, quaintly, as a "special."

So there we have them. Now what do we do with them? It's a question that has been essayed and abandoned countless times. The most anybody can do is gawk and wonder and laugh and worry and weep and rant. Where "The Dating Game" was comparatively modest and circumspect -- a woman would ask questions of three hidden bachelors, then choose one based on compatibility -- a contestant on, say, "Change of Heart" won't even blush to relate that what initially attracted her to boyfriend was that he was "sensitive and sensual and has this big, tight ass that I can't keep my hands off." And I am quoting a contestant who appeared on the show at her mother's urging.

Something about the formats of these shows, not to mention the behavior of their protagonists, seems to defy analysis. Can these well-toned, glossy youngsters really be looking for love? Would not a glance at the Nerve.com personals yield better and less humiliating results? Is love really all about backbiting, put-downs and public groping? Is there nobody left on earth who does not aspire to hosting their own show on E! someday? Given the seemingly never-ending parade of young lovers who trot through these shows on a daily basis, one might draw some cynical conclusions about televised love. Where is the romance? Where is the courting? What, exactly, is the point?

These are good questions, and I didn't know the answers, so I looked them up. Or maybe my eyes naturally gravitated toward the bookshelf after spending several hours watching the nation's youth grope and put each other down in their quest for romance. However it happened, I found myself rereading my favorite chapter in medieval scholar Georges Duby's fascinating book on love and marriage in the middle ages, "Love and Marriage in the Middle Ages."

In attempting to define "the strange phenomenon called courtly love" as it was described in 12th-century French songs and romances, Duby set about trying to determine what kind of relationship existed between this type of literature ("a vicarious literature of dream and escape" in which a young man would try to woo and win over a married woman who was his social superior) and actual social behavior. In a similar attempt to understand the strange phenomenon of dating shows, I'll crib from him.

First, as Duby writes, "for these works to find an audience, they had to relate in some way to the concerns and the real situation of the people for whom they were written." Let's examine the dating show genre -- "a vicarious TV show format of dream and escape," and actual social behavior. Take "Blind Date," which involves two strangers meeting and embarking on some improbable activity before settling down to the apotheosis of all dating shows, "a romantic dinner." Daters on "Blind Date" are virtually guaranteed to despise each other, but are required by the rules of social conduct -- perhaps sharpened by the fact that they are alone together -- to keep their thoughts to themselves. "Blind Date's" writers then add their own schadenfreude-inspired humor to the proceedings through the clever use of superimposed thought bubbles and diagrams meant to illustrate all the nasty thoughts that the daters, or at the very least, viewers, must, invariably, be thinking. Relationship to reality: Check.

Duby then goes on to explain that, in its most schematic form, the protagonist of a what was once known as fine amour (refined love) fiction was always "a 'youth' in both senses of the word ... a man without a lawful wife ... and a man young in age, whose education was not yet complete. This man besieges and tries to take a lady, a woman who is married and therefore inaccessible ..." (Or, as a recent female contestant on "Taildaters," an actress/model named Sasha, put it, "You've got to prove to me that you're, like, worthy of what I have to give.")

Trying to get the medieval equivalent of the boss's wife in the sack was not without its risks. As Duby explains, at the heart of this model of romance lay danger. In this way, courtly love was basically an educational game, and "the more perilous the test, the more educational it was." Though a male contestant on, say, "Taildaters" is unlikely to be beheaded or barbecued for successfully managing to remove his lady's bikini top in a hot tub, televised rejection is no picnic either. Potential harm to suitor/suitress: Check.

Or take "Change of Heart." On this show, a couple with problems agrees to go on separate blind dates with strangers, which are then monitored by a "date cam." The couple's respective blind dates are chosen for maximum home-wrecking potential. After the conclusion of their respective blind dates, the couple reunites on the set with their new friends and a Cindy Crawford-esque host, who encourages the audience to weigh in on whether they should go their separate ways (the audiences "whoos" the most hostile wooers.) More often than not, couples torture each other with examples of the superiority of their new buddies, then decide to stay together. Here we have an educational game at its most perilous. Lessons learned the hard way: Check.

Next, Duby compares the practice of courtly love to the pop-culture phenomenon of the day, the wildly popular jousting tournament. "As at the tournament," he writes, "the young man was risking his life in the hope of improving himself, of enhancing his worth, his price, and also of taking, taking his pleasure, capturing his adversary after breaking down her defenses, unseating her, knocking her down and toppling her ... But this game, which was an education, also called for competition. It involved winning the stake -- the lady -- by outdoing rivals."

Whoa! Is it "Dismissed"? "Elimidate"? "The Fifth Wheel"? Or could it be the ultimate erotic spectator sport, "Taildaters"? On these shows, dating is raised to the level of a brutal competition. All of these shows depend heavily on the competitive nature of the vying suitors, who will usually stop at nothing to win the affections of some dude or dudette they have just met. The much-imitated "Dismissed" involves a man or a woman going on a date with two members of the opposite sex. At the end of the date, the man or woman "dismisses" one of his or her dates.

"Elimidate" uses a similar model, sending a man or a woman on a date with four members of the opposite sex. "The Fifth Wheel" sends two men on a date with two women and throws in a fifth tempter/temptress for good measure. "Taildaters" updates the format to suit our sedentary times. Two couples are sent out on two dates, while four of their closest friends and exes stand by with couch-bound play-by-play analyses and impromptu, text-messaged plays. Romance as competitive spectator sport: Check.

Ultimately, Duby concludes that courtly love, as it related to the real lives of the knights and ladies of 12th century France, had much more to do with an attempt on behalf of the secular and religious powers that be to teach men and women to regulate their desires and to mold social relationships. Duby wonders if perhaps life did not begin to emulate fiction, a question that forms quite naturally after watching a dating-show marathon. (Check.) Courtly Love also served to "enhance knightly values, and as far as ostentation, illusions and vanities were concerned," (Check) "it helped control the element of disorder and to tame the young." (Check.)

Then Duby really goes out on a limb. "Courtly love taught men how to serve, and serving was the duty of the vassal." The boys and girls on dating shows may not learn about love, but they sure learn how to give good TV. They're not at the service of some unwashed provincial lord but of us, the audience, the great untrammeled id behind the camera. We're their collective liege and master; they'll do anything to please us as long as we keep watching.