A new stunt to stunt growth

New restrictions on high school graduation go further to infantilize teenagers in the hope of making them perfect adults. 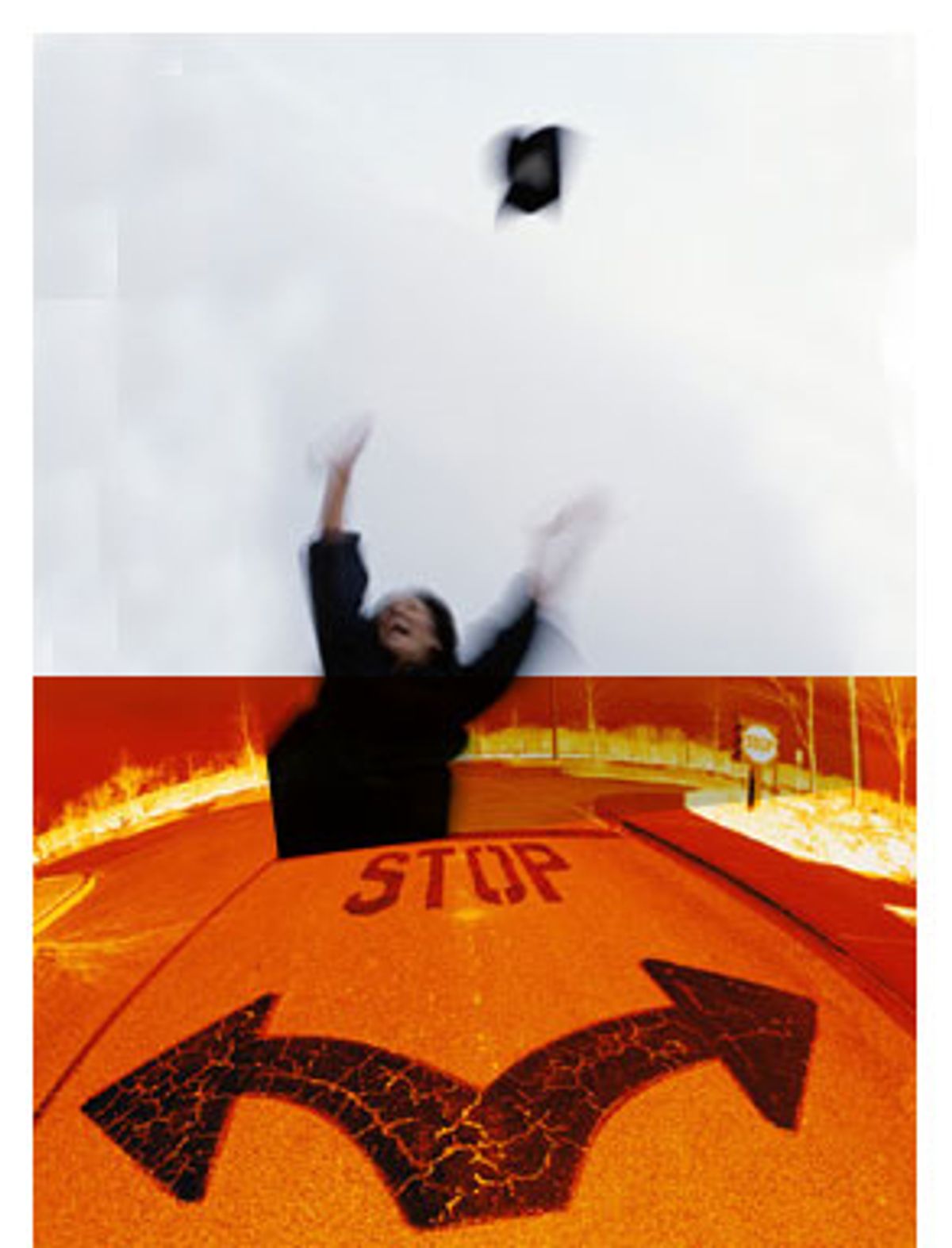 If there is one burning desire that carries high school seniors through their last year of school, that forces their eyes open at ungodly hours and carries them in a fog to class, it is the desire for freedom. To be free is the core ambition; "eat my dust" is the mantra of the hormonal herd as graduation draws near.

Unless you are a senior in San Fernando Valley.

In eight San Fernando Valley high schools -- District C of the Los Angeles Unified High School District -- seniors are required to sign up for some kind of post-secondary education if they want to don a cap and gown and receive a diploma with the rest of their class. Those who are so shiftless, so without focus or ambition that they will take a year off, or perhaps, the rest of their lives off, to travel, or work, or read and eat snack foods, are allowed to graduate, but they must do so in private, and perhaps in shame, for there will be no seat on the stage for these laggards in San Fernando Valley high schools.

As for the whiners, the civil libertarians, the no-account kids who would complain: The district wishes to inform you that you haven't got a leg to stand on. Because the policy -- started at Grant High School in 1987, widened in March 2001 to reach eight district schools -- works.

Last year, when there wasn't a rule in place, about 54 percent of all students planned to further their education after graduation. This year, only an estimated 185 students in the entire district of 3,764 students have failed to sign up for something. That means that roughly 90 percent of the students graduating next month from San Fernando Valley high schools will be heading off to universities and colleges, the military or trade schools, or similarly acceptable career-oriented programs after they receive their diplomas to great applause and adulation.

But what looks like a major victory smells like teen spirit assassination. Never mind the issue of civil rights, or the shaky legal grounds for punishing students for something that will happen long after they leave school. The rule is part of a big picture in which adults are hacking away at youthful autonomy, trying to rein in the natural impulses of adolescents through increasingly punitive rules. At some point, a nation of frightened grown-ups decided that it's in their kids' best interest to never behave like kids. And in order to ensure that the kids make an instant transition to socially acceptable adult behavior, adults in a position of authority are systematically eliminating choice and replacing it with rules.

In San Fernando Valley high schools, for example, the idea, presuming the rule is not just a sadistic finale for battered school administrators, is for students to learn the importance of education. The lesson, however, is that you had better conjure up an acceptance letter from somewhere or you won't get to publicly celebrate the importance of education, which, of course, you already knew or you wouldn't be graduating from high school.

Students interviewed about the policy by the Los Angeles Times spoke of frantically signing up for community colleges, even though they had no intention of attending. Taft High School senior Kassie Finch got a letter of acceptance from Pierce Community College so that she could go to her graduation. Her real plan is to work at her mother's law firm. "I'm not sure if I'm going to college or not," she told the Times. Even to the most darkly Dickensian school principal it might be hard to understand what is wrong with wanting to be a paralegal near your mom for a while.

But the district administrators subscribe to the school of tough love and prefer to invest in superficial victories. "The policy basically says to our community that we hold very high expectations of our graduates," District C Superintendent Robert Collins told the Los Angeles Times. "We feel all our graduates are ready and recognize that to really be successful, you're going to need some kind of post-secondary [education] ... Is the policy harsh? I don't think so at all. A harsh policy is when we ignore youngsters."

And what is the different between ignoring youngsters and leaving them alone? When is a school picking on, instead of paying attention to, its students? Authorities like Collins -- and the politicians, administrators, policy makers and groups of parents who think like him (let us not forget the Bush administration) -- are convinced that when children aren't being watched, they are getting in trouble. Where is the respect, the trust, the humanity in that attitude? And doesn't it suggest that the adults in this camp have no confidence in their own parenting skills?

Coersion and the lash -- wielded for the kids' own good, of course -- don't just betray parental insecurity and a poisoned view of childhood and adolescence. These measures strip teenagers of every rite of passage in the name of "doing the right thing," infantilizing budding adults by wiping out every activity that facilitates maturation in a human being. Certainly nobody wants them to be kids forever.

Or do they? Privacy on high school campuses has vanished, as if only constant surveillance can ensure that teens won't dabble prematurely in adulthood. Lockers are searched; surveillance cameras installed in hallways and parking lots; campus doors locked so that students can't leave the safety of school grounds and get in trouble. Administrators hand students specimen cups and require them to urinate in order to prove that they are drug-, alcohol- and tobacco-free. If they fail, they'll be booted off the soccer team, or barred from the prom. High school seniors who are arrested for possessing even the smallest amount of marijuana are told that they'll lose federal financial aid if they go to college.

To prevent kids from even thinking about sex, they are urged to take virginity pledges, to heed the word of government-sponsored abstinence-only sex education programs that teach teens that their lives will be ruined if they don't stifle their sexual impulses. Teenage girls who do have unprotected sex -- perhaps because they weren't taught about birth control in their abstinence-only classes -- will find that they can't get abortions without parental consent, and that the morning-after pill isn't available.

Zero-tolerance policies expel kids from school for bringing a Swiss army knife to school or putting up a Web page that complains about a teacher in vaguely threatening language. Books like "Harry Potter" are banned from school libraries, lest an impressionable freshmen decide she wants to become a witch. At one San Diego high school, the female principal recently forced girls to lift their skirts and prove that they weren't wearing seductive thong underwear if they wanted to get into a school dance. Harassment, but committed in the girls' best interest.

And now, in San Fernando Valley high schools, graduating from high school is a privilege earned with one more perversion of teen justice. It is not enough to ban thong underwear in school; now high school administrators want to regulate kids' behavior far into the future, manipulating their choices once they've left their high school home. Suddenly, getting a job while you figure out your life or helping your family make ends meet just isn't good enough; it's a "bad" decision that, like taking drugs or having sex, deserves to be punished.

These programs are almost breathtakingly naive in their ignorance of even the most remedial aspects of adolescence. Lots of kids are going to dabble in drugs or sex or petty crime or general aimlessness. And they will do it because it is against the rules. Some might become dropouts and losers. Most will dabble and learn from their mistakes, much like their parents and the administrators whose sudden-onset amnesia keeps them from remembering, perhaps fondly, their own pasts. Bill Gates dropped out of Harvard. Steve Jobs did lots of acid. They both seem to have turned out just fine.

Of course, it could be memories -- explicit and cringe-inducing -- that cause school administrators and some parents to make rules to quash the natural development of children. These panicky attempts to ward off adolescence often come from panicked adults with futile plans to keep their kids from following in their footsteps. How sweet. How dumb. It is one thing to use your experience to soften the blows of adolescent screw-ups; it is a pompous and unrealistic thing to think you can prevent potential unpleasantness and life-changing blunders. In order to eliminate those dangers, you would have to eliminate the process of growing up. They're trying. But it will never work.

Fortunately, we tend, as Americans, to fight hardest for our freedoms: Freedom of speech and self-expression dominate our basic sense of justice. Autonomy and individuality are the essence of our brand. Yes, we want kids to graduate and go to college. We want them to steer clear of drugs, avoid pregnancy and disease, and stay out of jail. But we also are thrilled when they strike out, build something in the garage, write novels, reject the tyranny of the main to accomplish something extraordinary on the periphery. And they should do these things because they have realized on their own that they want to do them, not because they have guns to their heads. If we lighten up and trust, we can acknowledge that this is what it is to be an adult in a free country.