With a single shocking canvas depicting a prostitute in repose, 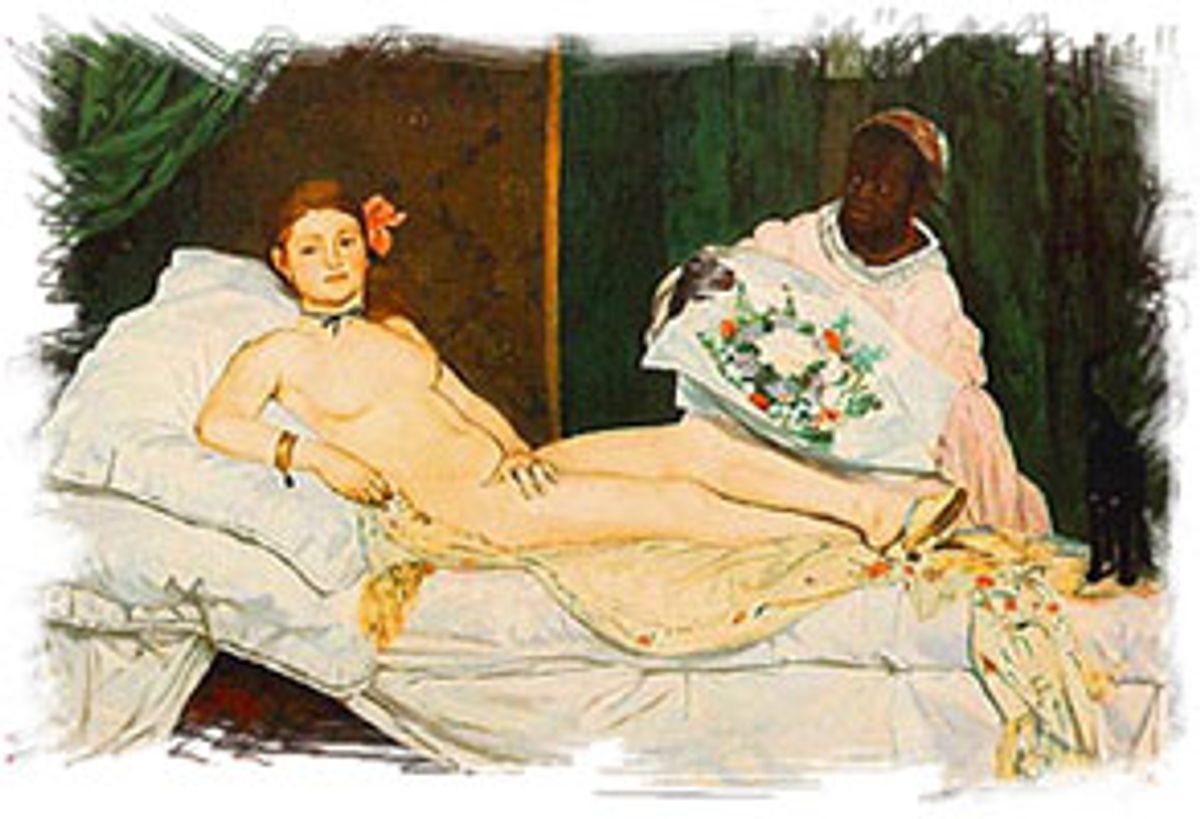 She was unlike any naked lady who'd ever gone before. She wasn't Eve in the Garden or Venus on a foamy bed of waves. She wasn't a goddess or an angel or a shy bather caught off guard. She was a contemporary woman -- unabashed, unclad, unmistakably unallegorical. Her name was Victorine Meurent, but Édouard Manet called her Olympia. And she changed everything.

On first inspection, one might wonder what all the fuss was about. Manet considered himself a painter of still life, and perhaps that's why Olympia has such a quiet mystery about her. She lounges serenely, starkly unclad but strategically adorned -- a black ribbon around her throat, a single slipper on her left foot (the right one has dropped carelessly off), a voluptuous pink flower at her ear. Her hand is firmly clamped over her sex. The outer corners of her mouth are raised just a fraction, a moment away from a smile or a sneer. Her eyes are drowsily heavy-lidded but her posture is unmistakably alert. Compare her to any overheated, dishabille nymph of the baroque or rococo eras and she seems positively demure.

But there's something different about this female. For one thing, she's pointedly not doing anything. She ignores the bouquet that her black maid offers, and the kitten, tail at a highly suggestive full attention, that peers from the foot of her bed. She isn't bathing or dreaming or dressing. As we take her in, we realize that she's a woman naked and in bed for exactly the first reason a woman might be naked in a bed. She's there for sex, and she regards the viewer with a look that's part invitation, part dare. She's a mistress, or more likely a prostitute, but she sure as hell isn't a sprite named Springtime.

Manet was perhaps the world's first shock artist. Every modern provocateur who slices up a cow or assembles a Lego death camp owes him a debt of hype-making gratitude, but his influence exceeds his infamy. Well-bred, elegant and gentlemanly, Manet was as horrified by the response to "Olympia" as his critics were by the work itself.

He was a painter trained in the staid academic tradition but too exuberant to be constrained by it. Inspired by the audacious realism of Gustave Courbet and the otherworldly darkness of Spanish masters like Velázquez and Goya, the young Manet was inevitably drawn to less conventional themes than the gentle, drawing-room-ready tableaux of the Salon artists. But just because his style didn't run toward chubby cherubs didn't mean that Manet fancied himself an outsider. He maintained that he simply painted what he saw, and he showed his work because he sought acceptance. What he got was more vitriol, more fame and more lasting power than he'd ever dreamed.

When "Olympia" was exhibited at the Paris Salon of 1865, it ignited a scandal over art and decency that has rarely been paralleled. Think Rudy Giuliani invented outrage? Critics eviscerated the work, and the crowds almost did the same. Antonin Proust later recalled that "If the canvas of the Olympia was not destroyed, it is only because of the precautions that were taken by the administration."

Victorianism wasn't strictly for the British, and no serious artist dared to paint a woman of such obvious ill repute without at least draping her in the exotic garb of harem girl. Yet here was a courtesan glorified in an homage to Titian's "Venus of Urbino" that was so obvious spectators called it parody. But it wasn't -- Manet didn't merely expose the prostitute to the eyes of the world, he had the audacity to worship her. It was blasphemy. How unfortunate for Manet's detractors that it was also exquisite.

It starts with the woman herself, and the fascinating face of Victorine Meurent. Meurent was Manet's longtime model, muse and companion, the subject of numerous canvases. Over the course of more than a decade, Manet invented her again and again as a boyish bullfighter, a street musician, a gracious lady in pink robes. In 1863, the same year he wed his wife Suzanne, Manet did two nudes of Victorine. The first, "Le Déjeuner sur l'herbe," he exhibited at the Salon des refusés after being rejected by the official Salon.

But the sight of Meurent's naked presence at an otherwise buttoned-up picnic party proved too alternative even for the alternative crowd, and the work was thumped as "bizarre" and "risqué." Perhaps chilled by the reaction to "Le Déjeuner," Manet waited two years to show the other nude. But "Olympia," to whom not even an innocent skinny-dipping motivation might be ascribed, caused an even greater furor. In no other canvas did the collaboration between Manet and Meurent unleash such fervent response, and in none were they as hauntingly dazzling.

What upset everybody so much? It may be that she seems so unaffected herself. She stares placidly at the viewer, putting us in the uneasy role of client to an alluring, if bored-looking, whore. Manet inhabited a world in which it was generally assumed that a woman existed to nurture, comfort, inspire or arouse, all in relation to her place in society and family. But Olympia, for all her blatant accessibility, is tantalizingly self-sufficient. There's nothing supplicating or humble about her. To the wealthy collectors of art and women, who regarded both as possessions, Olympia stripped them of their illusions. Her body is ripe for the taking, but everything else, including the meaning behind that enigmatic almost-smile, she's keeping for herself.

For all the great paintings in the history of art, few show a woman whose gaze is so startlingly direct and defiantly unaccommodating. Mona Lisa shyly glances to her left. So does Vermeer's "Girl with a Pearl Earring." Botticelli's Venus looks out dreamily into the middle distance, lost in her own thoughts, while Sargent's Madame X turns her head away completely. And scores of Virgin Marys glance rapturously up at the angels or tenderly down at their babes.

When a woman does face front in a painting, it's likely to be a portrait of a queen, not a canvas of a concubine. Olympia meets us eye to eye. It's an ingenious and unsettling device, a bit of artist's revenge. The image in the frame is the one doing the sizing up, and it is we who are left feeling appraised -- and potentially rejected. The critics, unaccustomed to having the tables so turned on them, were quick to serve up rejections of their own. They hated the subject matter. They hated the flat, primitive style. They hated everything about it.

"What's this yellow-bellied Odalisque, this vile model picked up who knows where, and who represents Olympia?" demanded one writer. "Inconceivable vulgarity," declared another, while yet another proclaimed that "art sunk so low does not even deserve reproach."

Manet was devastated. "The insults rain down on me like hail," he complained to his friend, the poet Baudelaire. Yet while many looked upon Olympia as a symbol of depravity or a slattern, others recognized her as a triumph. The writer Émile Zola called it Manet's "masterpiece," declaring, "It will endure as the characteristic expression of his talent, as the highest mark of his power ... When other artists correct nature by painting Venus they lie. Manet asked himself why he should lie. Why not tell the truth?" But the truth came at a cost.

Though he continued to paint and exhibit for the rest of his life, Manet remained a frequent target of public disdain, forever misunderstood and tainted by the scandals of his youth. He hadn't sought to offend; he simply painted the best way he knew how, in bold strokes and unexpected contrasts. And he wasn't alone -- his innovative techniques and unconventionally ordinary choices of subject matter eventually ignited a new generation of artists. Though he refused to label himself as such, his successors hailed him as the father of impressionism. He was among the vanguard to glorify not the figures of myth, but the radiance of absinthe drinkers, suicides and prostitutes.

In the artist's lifetime Olympia never received her due, but she aged remarkably well. Years after Manet's death, Claude Monet offered the work to the French government, and it's been a Parisian museum fixture ever since. Manet would have been pleased. He knew that to appreciate her, we just needed to look a little longer. "Time itself imperceptibly works on paintings," he said, "and softens the original harshness." The shock she provides now is one not of outrage but of awe.

One need only bask in the heady loveliness of Olympia, the shadows between her fingers, the curve of her belly, the contrasts of light and dark, to understand the depth of Manet's talent. But when we look deeper -- at the complexities and contradictions and beauty and brutality of his work -- his true genius emerges. Art to Manet wasn't a story about gods or saints or kings. It was about real life, as ordinary as commerce, as easy as sex.

To worship a goddess is easy, but to love a human -- especially one who offers no hint of reciprocation -- is far more work, and infinitely more thrilling. Manet brought the hidden world of the everyday into the light and made it remarkable. For all that's reserved about Olympia's demeanor, the passion of her creator is there in every stroke and every line. She may withhold her heart, but we, helpless, are under her spell forever.