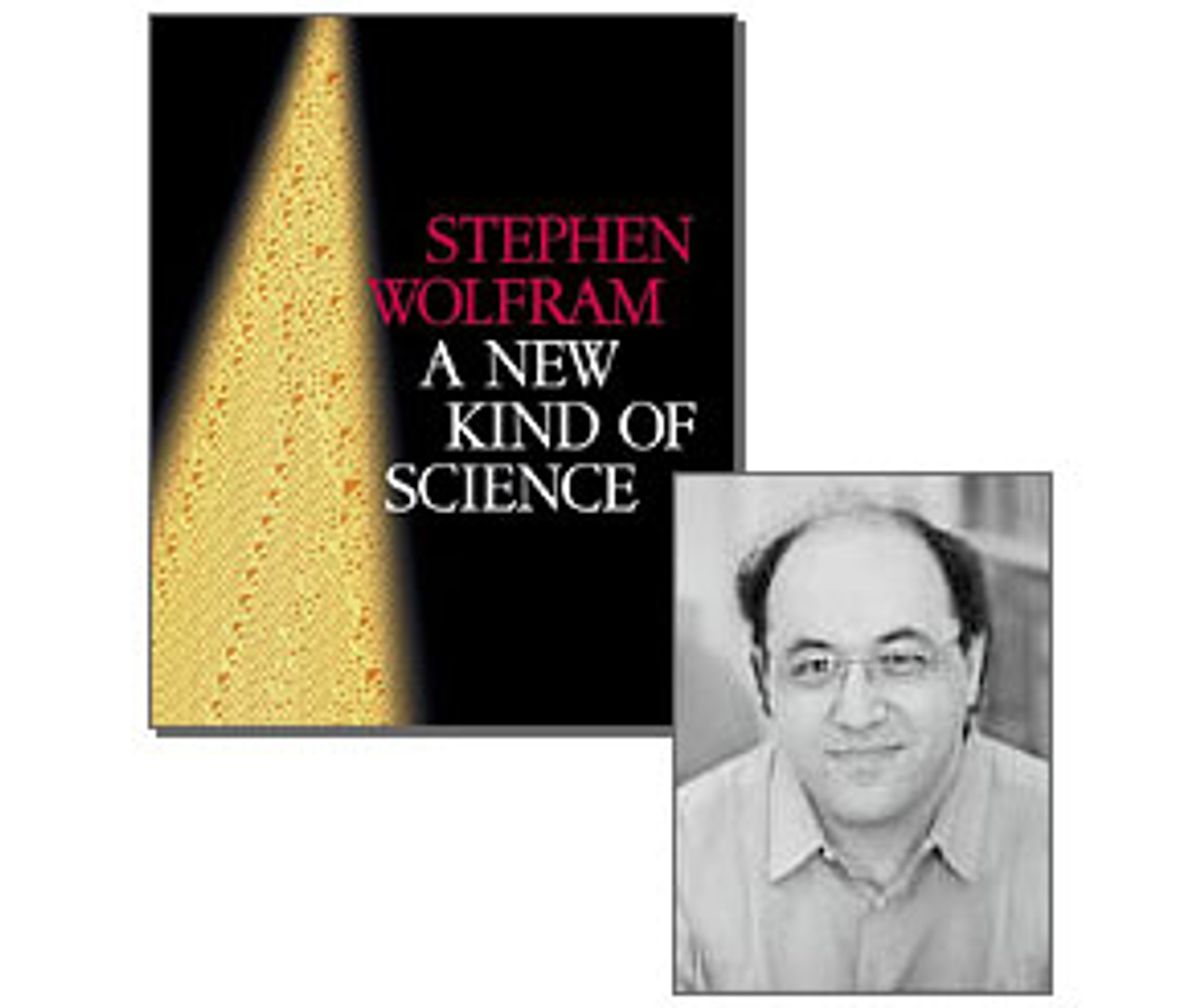 Stephen Wolfram wants to bring science into the age of the computer. A boy genius turned multimillionaire scientist, Wolfram has been a veritable recluse for the last decade while developing his new approach to fundamental physics. He runs his software company, Wolfram Research, largely by videoconference calls from his home, allowing himself the latitude to pursue his research on the subject of complexity. He views the future of science as one dominated by the computer, one where scientists run experiments via the keyboard, unraveling the vast complexities of the natural world through relatively simple rules of programming.

Wolfram is a maestro of this new world, a Moby of a scientist who has looked deep into the standard way of doing science and who sees the sparkling of a new dawn. His just-published magnum opus, "A New Kind of Science," is his Principia, a response to the deterministic mathematics that Isaac Newton used to render science into a tidy picture of elliptical orbits and parabolic arcs, predictable to as many decimal points as you please.

If Einstein was the long-haired rocker whose theory of relativity overturned the staid, boring establishment, and Heisenberg a jazz fusionist who composed new tunes from discordant notes, Wolfram is a techno-pop artist who programs his machine to the new sounds he hears in his head. With this book he is inviting the rest of the world to move along to the beat.

Twenty years ago, Wolfram writes, the unexpected output of a computer program made him realize he had seen "the beginning of a crack in the very foundations of existing science, and a first clue towards a whole new kind of science." Although barely out of his teens at the time, he was already recognized as a genius -- he had published his first scientific paper at the age of 15, a study in particle physics titled "Hadronic Electrons?" He received his Ph.D. in theoretical physics from Caltech at the age of 20, and a year later became the youngest person ever to receive a fellowship from the MacArthur Foundation (these are informally called "genius" grants).

"He's extremely smart, impressively smart," says Andrew Odlyzko, a friend of Wolfram's who worked with him 20 years ago on cellular automata. And Wolfram knew it. "He was certainly in his early days more than a little arrogant, which rubbed people the wrong way," Odlyzko says.

Marriage and children have smoothed Wolfram's rough spots over the years, and a big pile of money probably didn't hurt: He made millions off his development of the Mathematica software program, a versatile program that is used by millions, most of them scientists and engineers who use it to do symbolic and numerical mathematics.

With continued development, Wolfram expanded Mathematica into a programming language in its own right. "It's one of the most complete packages I've ever seen," says Flip Phillips, a professor of cognitive psychology at Skidmore College and editor of the Mathematica Journal. Wolfram initially developed Mathematica to evaluate complex equations in particle physics called Feynman diagrams, then turned the usual academic tables by founding a corporation to sell the product to his fellow academics.

His program and his company's success afforded him the opportunity to pursue his scientific interests unbeholden to the usual demands of academia -- the need for grants and the publish-or-perish treadmill. Wolfram writes that he resolved "just to keep working quietly until I had finished and was ready to present everything in a single coherent way."

But computer technology allows more than programming languages; to Wolfram, it makes a fundamentally new kind of science possible, just as the development of telescope technology made astronomy possible and microscope technology took biology beyond mere taxonomy. "Computers are not just limited to working out the consequences of mathematical equations," he says, whether they be Feynman diagrams or your checking account statements. Rather, studying the behavior of even the simplest programs reveals extremely complex behavior, as anyone who's tried to debug a piece of software knows.

Wolfram began his work, and begins his book, by analyzing cellular automata, a conceptual device invented by the Hungarian physicist John von Neumann for representing a complex system using an array of simple elements, such as squares on graph paper that can be colored either black or white. Starting with one initial black square, decide on a rule for how each of its neighbors will be colored in each step forward in time. Repeat the process indefinitely, moving forward one time frame after another. (John Conway's "Game of Life" is a famous example of a cellular automaton.)

Wolfram spent several years analyzing the results of such cellular automata setups, computer work that involved more than a million billion logical operations and the equivalent of tens of thousands of pages of output. Most of the output is relatively simple, repetitive patterns that remind one of a distinctive braid, or sometimes a snowflake, or occasionally a fractal pattern. But a few of the pictures seemed to demonstrate arbitrarily complicated patterns, long, random chains that seemed to take on a life of their own, reminiscent of the turbulence of a fluid or the curl of rising smoke.

You or I might have seen a pretty pattern and moved on, but Wolfram says using them he has seen into the clear blue depth of a new paradigm of thought. For such pictures can be seen even in cellular automata whose rules are extremely complex -- those in multiple dimensions, or based on number systems, or in a Turing machine, a very simple machine that has, logically speaking, all the power of any digital computer.

No matter how elaborate the rule, the behavior that emerges is remarkably similar to that of the simplest cellular automata, according to Wolfram. And what that means is "there are general principles that govern the behavior of a wide range of systems," Wolfram writes. "Even if we do not know all the details of what is inside some specific system in nature, we can still potentially make fundamental statements about its overall behavior."

All well and good, but Wolfram's conclusions have taken him to far greater heights of thought. The problem with traditional mathematics and physics is that it has of necessity restricted itself to simple cases that are "computationally reducible," systems such as a planet orbiting a star where mathematical analysis provides a simple equation describing the motion. But in other domains, such as predicting the weather, it has failed miserably.

Wolfram's new science -- a science largely devoid of equations -- demonstrates, he says, that there are many common systems whose behavior cannot be described except by explicit simulation on a computer. Most of the world, he asserts, is in fact computationally irreducible. The mathematical emperor does have clothes, but not much more than cotton skivvies and an undershirt with an unseemly spaghetti stain on the front.

Wolfram proceeds to attack the bulwarks of science head-on. The famous Second Law of Thermodynamics, stating that any energy associated with organized motions of microscopic particles tends to degrade inevitably into heat -- that order tends to disorder -- is "is an important and quite general principle," he writes, but his simple programs show that "it is not universally valid."

How can humans have apparent free will in a universe governed by deterministic rules? Because, Wolfram says, though our brain works by definite rules of chemistry, "our overall behavior corresponds to an irreducible computation whose outcome can never in effect be found by reasonable laws." Darwinian evolution? Wolfram believes that his methods can generate essentially any degree of complexity exhibited by life, and they have nothing to do with natural selection.

In fact, Wolfram sees no end to the possibilities of his ideas -- or his own place in scientific history. "In time," he writes in his preface, "I expect that the ideas of this book will come to pervade not only science and technology but also many areas of general thinking. And with this its methods will eventually become a standard part of education -- much as mathematics is today."

It remains to be seen how the scientific community at-large will react to Wolfram's work. (IBM computer scientist Gregory Chaikincalls Wolfram's work "a monument to experimental mathematics and the convergence of theoretical physics with computer science.") Wolfram has purposely declined to publish in the usual scientific journals, and his book is surprisingly devoid of footnoted references to the work of those who came before him (though a full third of the two-volume set consists of an appendix chock-full of general notes).

Wolfram has sought to control all aspects of the work, from establishing his own publishing house to hiring a publicist and placing an embargo on discussion of the book until its exact release date. The book has been anticipated for years, and the hype has apparently paid off: It was already ranked No. 1 on the Amazon.com bestseller list several days before its release. "Never lose a holy curiosity," said Einstein. Whether or not Wolfram's ideas launch science in a new direction -- and the great success of traditional science in explaining and shaping nearly every aspect of our world sets a very high bar indeed -- like other great scientists he has followed his instincts and blazed a new trail. One's impression is that Stephen Wolfram has never expected any less of himself.

David Appell is a freelance writer living in New Hampshire.