His visit can't end Castro's tyranny, Cuba's poverty or the Bush administration's lame policies, but he's the first American politician who has tried to give to Cuba, not just take. 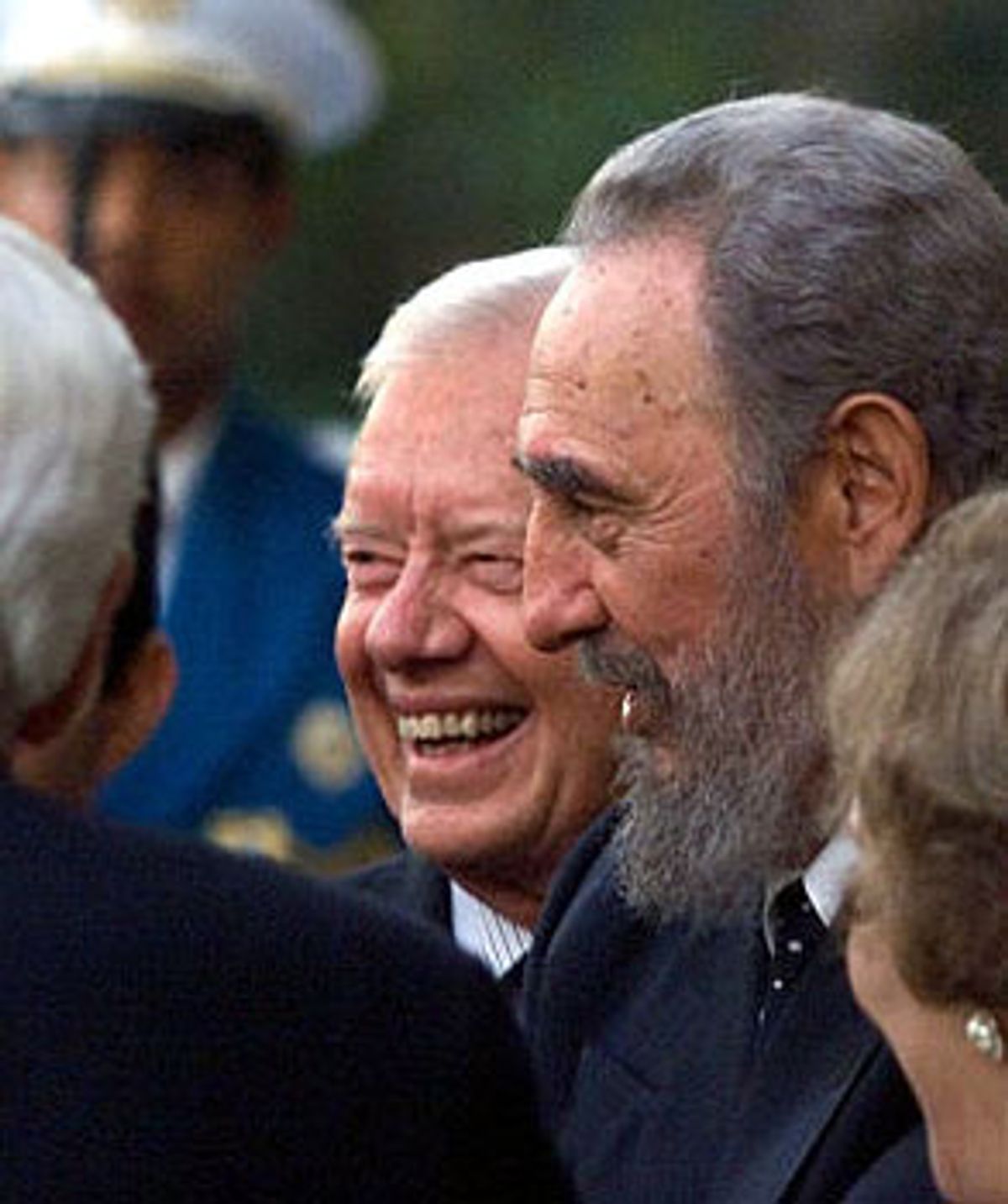 When Jimmy Carter's feet touched the baking asphalt of Havana's José Martí airport on Sunday, an amorous and long-delayed honeymoon with the rebel island finally began. Carter's late-1970s presidency made a huge difference to Cuba, and the former president is still smarter about U.S.-Cuba relations than any other American living today, including the current resident of the White House. When he talks about Cuba, people in both countries listen, and his five-day tour has been almost as historic and monumental as the pope's 1998 visit, from which Cuba is still enjoying a moderate hangover. Tourists can still purchase (at clearance prices!) the last few olive-drab T-shirts emblazoned with colorful prints of the pope and Castro shaking hands.

You'll never catch a Cuban wearing one of the pope T-shirts, of course, even at clearance prices. Nobody has the nine bucks (roughly a month's wages) to waste on such a novelty. Nor will they have the cash to buy the new Carter T-shirts. Those are tourist items. Castro hopes the Carter visit will result not just in T-shirts but also in a new wave of U.S. tourists to buy them, bringing dollars to save the moribund Cuban economy.

For Castro, the world's foremost media strategist now toiling with his tenth U.S. administration, Carter's visit has been yet another successful coup fought on the age-old battlefield of newsprint. On the heels of being added to the Axis of Evil by his enemies in Washington, who accused him supporting bio-terrorism -- a move timed to interfere with Carter's visit -- Castro got the respected former president to go to bat for him. In a courageous speech Carter challenged the United States to produce evidence of Cuban terrorism and insisted there was none. Of course, Castro also let Carter take to the Cuban airways and talk about democracy and human rights, knowing the openness would play well internationally and not change much domestically. Through it all, Castro had his eye on the prize: Carter's trip is the latest salvo in a battle to bring back American tourists, and while the battle hasn't yet been won, the P.R. value of the visit is enormous.

In March 1977, at a time when Cuba was enduring a stretch of poverty very similar to today's, one of Carter's first acts was to lift the controversial travel ban on Americans. With the entire economy hingeing on Soviet subsidies, the Cuban people's faith in Castro's abilities as an economist had begun to wane before then. The only way out of the mess was to take a stab at tourism as a means to earn the island some hard currency. So the Varadero peninsula, two hours east of Havana, was earmarked in 1976 as Cuba's first acre of paradise, quarantined specifically for capitalist tourism.

Only 2,500 tourists visited Varadero in 1977. The next year, after Carter lifted the travel ban, the number rocketed to 18,000 -- mostly American tourists who came to indulge on the sweetest ribbon of Cuban sand. It was so profitable that the government began banking heavily on tourism as the next big thing, hoping to turn the island into the Caribbean's new Hawaii.

But alongside the tourism campaign, Castro continued to pursue his satellite wars in Nicaragua and Angola, which created serious strains in Washington. In April of 1982, the Reagan administration reinstated the ban on American leisure travel to Cuba, pulling the plug on the island's short-lived economic boom. Now 20 years later, the travel ban is still intact, essentially barring all U.S. citizens, with the exception of scientists, journalists, and exchange students, from visiting the island.

Europeans and others still traveled to Cuba, of course, and Castro's pursuit of tourists became even more aggressive after the Berlin Wall collapsed in 1991 and Cuba's economy collapsed with it. In 1991, only 350,000 tourists visited the island. By the end of 1999, the regime boasted 1.6 million visitors, providing about one-fifth of the island's income and surpassing sugar as Cuba's new crop. The new communist slogan became "With tourism we can win," and in 2000, 1.8 million came, buzzing in and out of Cuba's airports at a rate of 5,000 a day.

Yet Cuba appears to be stuck at that number, despite projections that by 2010, 7.5 million visitors would grace its shores. It's now obvious that because of the global recession and a low visitor-return rate -- despite Cuba's massive investment, tourist amenities are still not what high-end visitors expect, and most people come for the one-time novelty -- the numbers are tapering off. The success of Cuba's economic plan is now absolutely hinged on the forbidden, lucrative, nearby U.S. tourist market.

Enter Jimmy Carter. Castro has been making concessions to the United States since January 1999, when President Clinton began negotiations. He's courted the U.S. agricultural sector, which has pushed to open trade with this potential $6 billion food market. He's even reached out to President Bush, expressing sympathy after the Sept. 11 terrorist attacks and not interfering in any way with the U.S. development of the Guantanamo Bay base to house and interrogate al-Qaida prisoners. But he was getting nowhere with a Republican administration beholden to Cuban-exile voters and right-wing ideologues. So in late 2001, Castro made two moves: He purchased $30 million of corn from Louisiana -- despite having promised that he'd never purchase "a single grain" of U.S. food until the travel ban was lifted -- and he invited Carter to visit.

The timely allegations of the undersecretary of state for international security, John Bolton -- that Cuba was providing bio-weapons to the so-called rogue nations of Iran and Libya -- were an obvious Miami-orchestrated attempt to derail Carter's trip, to keep the lid on any agitation to lift the travel ban, and to quash further agricultural trade.

Carter saw through this gambit. He's seen it all before. In 1977, shortly after he lifted the travel ban, "60 Minutes" aired a segment called "The Castro Connection," which alleged that Castro was involved with running drugs for the Medellin cartel through Cuba and into the United States. That charge was a staple of Reagan's policy toward Cuba, and as the Cold War morphed into the war on drugs, Cuba was forced to remain on military alert. The object of war is to never allow the enemy to rest, and Cuba got very little sleep between 1980 and 1999. But in 1999, after finding no evidence -- other than hearsay from convicted felons in Miami -- that Cuba had ever run drugs, White House drug czar Barry McCaffrey scratched Cuba off the drug-trafficking watch list, and Drug Enforcement Administration officials, along with Coast Guard staff, traveled to Cuba to begin negotiating cooperative efforts in U.S.-Cuba drug interdiction. Cuba's removal from the drug-watch list was a major blow to anti-Castro conservatives.

Then came Sept. 11. The war on terror replaced the war on drugs, and anti-Cuban animus had to be recast as part of the nation's fight against terrorists. But rather than be cowed by the allegation that Castro was behind bio-terrorism, the seasoned Carter got pugnacious, denying the charge and demanding that the United States provide evidence.

So what will Carter's visit accomplish? In the short run -- besides sealing Carter's reputation as a smart, courageous ex-president -- it will do very little. In 1998 the pope came and gave much the same spiel, scolding both Castro and the United States for politicking at the expense of the people's welfare, and almost nothing happened.

For average Cubans, Carter's visit won't mean much. Despite Castro's vaunted literacy, education and health programs, Cubans remain poor, earning an average of 180 pesos, or $9 a month, barely enough to pay living expenses. Things like butter are fading memories from the good old days of the 1980s. Some months there are no beans in the bodegas. Other months there are no peas. Pork is a luxury. Cubans are beginning to realize that until the U.S. travel ban is lifted, there will be no additions to the already scant ration card. The shortages and sacrifices will continue as long as Castro is forced to dump all of Cuba's tourist earnings back into building hotels in the hope that someday things will change, while he plays a very delicate balancing act between the wobbling faith of his own exhausted people and a desperate need to find more dollars.

Most Cubans like Carter because he means well. And they respect him because he's always been friendly to Cuba. But his optimism seems almost out of place on an island where a collective pessimism is deeply ingrained. With Carter come good intentions, but the nutritional value of good intentions is negligible for a people subsisting on a meager diet. When Carter began talking about the future to 11 million Cubans on Cubavision TV on Tuesday, much of the island rolled their eyes. They've heard all of this stuff about the future and "improved relations" so many times that most have given up on it entirely. The word "future" is such a clichi in Cuba that even Castro bites his tongue now when he gets the urge to say it during speeches, for fear of being taken as senile.

For Castro, Carter's visit was a big win. It was another grand photo op, upping the Cuban government's prestige while making the Bush administration look like pushy cowboys. It will likely translate into another handful of illegal American blockade runners with pockets full of dollars who want to see Cuba for themselves. If Carter says it's safe to visit, then it must be safe. Plus, all those European tourists who were thinking about maybe going to Cuba sometime just saw a little travelogue on CNN. It's free advertising.

Dissidents in Cuba are praising Carter's visit, and his meeting with human rights advocates was in fact historic. Still, the 11,000 signatures on the Varela Project petition demanding democracy in Cuba amount to less than one-hundredth of 1 percent of the population. Most Cubans had never heard of the Varela Project until Carter mentioned it in his brave speech Tuesday night, and when Carter leaves, they'll likely never hear of it again. The former president's attempt to spread democracy in Cuba was a noble gesture but not likely to have much influence.

What will bring change to Cuba is more pressure from the U.S. business community -- which could be spurred by Carter's visit. Money talks louder than grand gestures, and it's possible U.S. agricultural and tourism interests will turn up the heat, taking on the waning but still formidable power of the Miami anti-Castro conservatives. In January 1999, a CNN poll found that 75 percent of Americans wish to lift the travel ban, remove the embargo, and normalize relations with the Cuban government. Three years and a new president later, those numbers are increasing, yet Washington has made no progress to meet the desires of American voters.

In fact the Bush administration, fawning over the tiny minority of very powerful Cuban-Americans in Florida, has reversed progress, increasing fines for travel to Cuba even in the face of Castro's concessions. Next Monday Bush is making a speech to Miami's Cuban exiles, where he is expected to announce plans to tighten, not loosen, restrictions on travel and trade with Castro's country.

As for Carter, no matter what happens next, he became the first president to visit Cuba since FDR inspected Guantanamo Bay in 1939, and the highest-ranking statesman to visit since Vice President Richard Nixon went to Havana in 1955. His speech on Tuesday will go down in American and Cuban history for the way it combined criticism of Castro's tyranny with censure of U.S. policy toward him. More important -- and the thing most Americans will miss -- is that Carter was the first U.S. politician to come to Cuba to give, not to take, and that in itself is a first in history.

Ben Corbett is writing a book about Cuba.