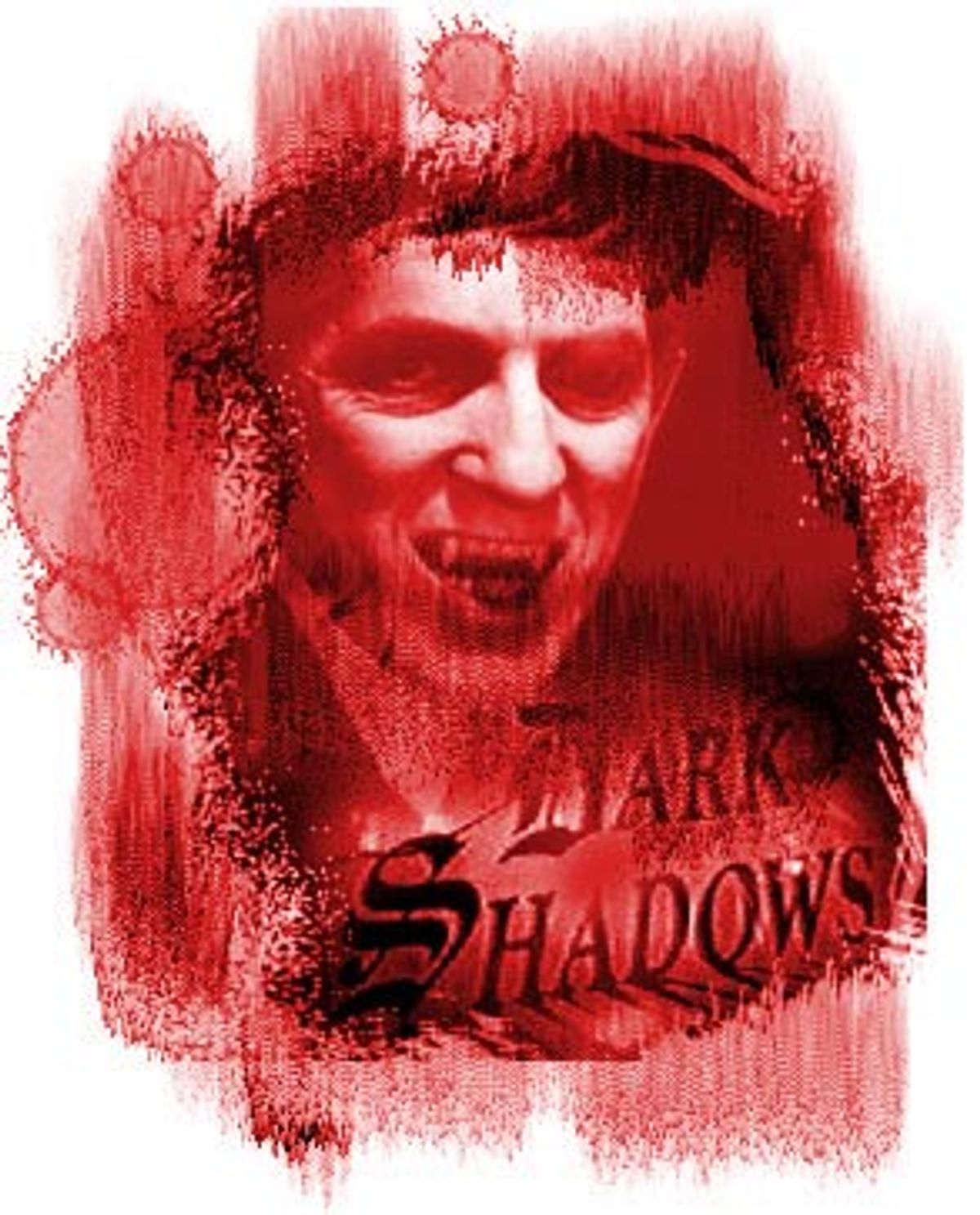 Before Buffy, the vampire slayer, before Angel, the remorseful neck-biter with a soul, there was ABC's "Dark Shadows," an afternoon soap opera that bewitched a generation of viewers -- ask your mom -- with vampires, werewolves, ghosts, Gothic romance and the Cheez-Doodliest special effects this side of Ed Wood Jr.

"Dark Shadows" took the soap genre beyond hospitals and Peyton Places into the wiggy, more youth-friendly realm of the serial thriller. From 1966 to 1971, kids (well, girls, mostly) avoided after-school activities in order to be home by 4 p.m., when the spooky, Theremin-laced theme song would strike up and big, Gothic lettering spelling out "Dark Shadows" would float over footage of a storm-tossed surf. For 30 minutes, these future fans of Anne Rice, "Buffy" and "Angel" were held rapt by the continuing adventures of Barnabas Collins -- the original vampire with a soul -- and his occult-bedeviled descendants, the wealthy Collins family of Collinsport, Maine.

To watch "Dark Shadows" today (the Sci Fi Channel airs back-to-back episodes weekdays at 10 a.m.) is to feast on camp-a-licious flubbed lines, awkward silences, wandering boom mikes, misfiring props and special effects along the lines of dime-store vampire teeth and rubber bats on a string. But never mind that -- "Dark Shadows" addicts were (and still are) a forgiving bunch. What matters is that the show's crazed inventiveness compelled you to suspend disbelief, even as you giggled like mad.

The dense, spooky story lines of "Dark Shadows" time-traveled from the then-present (the 1960s and early '70s) to, among other periods, 1692, 1795, 1897 and 1949, with the heroic cast playing several incarnations of their characters. (Both twists were regular features of later sci-fi/fantasy series like "Angel" and "Xena: Warrior Princess.") The swift metamorphosis of "Dark Shadows" from TV cult to genuine pop cultural phenomenon was a premonition of the niche-marketed TV landscape to come, when off-network, off-hours and offbeat shows could still become household names. And "Dark Shadows" was TV's first supernatural daytime soap -- remember that the next time Tabitha and Timmy do their dark magic on "Passions."

Most of all, "Dark Shadows" broke the stereotype of the evil vampire, by making Barnabas Collins a spiritual descendant of the Brontë sisters' mysterious, savage antiheroes. The 175-year-old Barnabas was originally supposed to be the bad guy. But classically trained Canadian actor Jonathan Frid played him as a sad, cursed being who yearned to be human again. Frid often looked mournfully lost in thought -- in truth, he was struggling to read the cue cards without his glasses -- and his sensitive mien elicited fans' sympathy for the devil. The writers obliged the burgeoning Barnabas cult with a back story recasting Barnabas as a victim of a vengeful witch, making him a lonely soul carrying a torch for his long-lost love.

"Dark Shadows" creator Dan Curtis has always insisted that the show came to him in a dream, with an image of a girl on a train reading a letter and a voice-over explaining that she was journeying to a seaside town to work as a governess. The show's head writer, Art Wallace, begged to differ; according to Wallace, the premise for "Dark Shadows" arose from a script he wrote for the TV anthology series "Studio One." In a compromise, the show's credits read "Series Created by Dan Curtis, Story Created and Developed by Art Wallace."

"Dark Shadows" premiered on ABC on June 27, 1966. Billed as a "Gothic soap opera," the show opened with a narration by actress Alexandra Moltke as the governess: "My name is Victoria Winters. I am going on a journey that will bring me to a strange dark house on the edge of the sea at Widow's Hill ... " (Fun fact: Moltke resurfaced several years later amid scandal as Alexandra Isles, a New York documentary filmmaker alleged to have been Claus von Bülow's mistress.)

For the first few months of its run, "Dark Shadows" stuck to melodrama and mystery. Victoria Winters -- who had no memory of her past -- felt oddly at home in gloomy Collinwood mansion, the centuries-old estate of widow Elizabeth Collins Stoddard (Hollywood veteran Joan Bennett), her rebellious teenage daughter Carolyn (Nancy Barrett, the daytime TV It Girl of her day) and assorted relatives, children and servants. Initially, the ratings were so lackluster that the show was in danger of cancellation. Viewers started to perk up when Wallace and his writers introduced ghosts into the story line, but it wasn't until April 1967, when the show made a last-ditch attempt to woo viewers by delving deeper into the supernatural, that Barnabas Collins first appeared.

Barnabas was released from his centuries of sleep by grave-robbing caretaker Willie Loomis (John Karlen, who later played Tyne Daly's pajama-clad husband on "Cagney & Lacey"), who discovered his coffin in a hidden room of the Collins mausoleum. Barnabas showed up at Collinwood claiming to be a long-lost relative and prevailed upon Elizabeth to let him move into another house on the property. At night, Barnabas sneaked out to snack on nubile townies, one of whom, waitress Maggie Evans (Kathryn Leigh Scott), bore an uncanny resemblance to his long-ago love Josette du Pres. The softer side of Barnabas emerged in a flashback to 1795, in which Barnabas was cursed into vampiredom by Josette's maid, Angelique (Lara Parker), who loved Barnabas. Josette met a tragic end, setting Barnabas' desire for vengeance in motion.

The 1795 flashback was the show's first foray into time travel, with the story line precipitated by Victoria Winters' disappearance during a present-day séance. She woke up in the 18th century and was accused of witchcraft by repressed biddy Abigail Collins (Clarice Blackburn) and the ambitious Rev. Trask (played with chilling charisma by Humphrey Bogart look-alike Jerry Lacy). Later story lines got more impressively weird, with characters caught up in "parallel time," a sort of Bizarro Planet concept of alternate universes.

Throughout all of these time periods, one constant remained: Barnabas was willing to try anything, from exorcism to a Frankenstein plan of grafting his head onto a nonvampire's body, in order to be human again. Aiding him in this quest was his secret ally, Dr. Julia Hoffman, a specialist in blood disorders. Played by the elegant Grayson Hall, the solitary Julia was dignified and brainy. She had the chin-forward resolve of Katharine Hepburn. She also had a bad case of the hots for Barnabas.

The dawn of the Barnabas era coincided with a time slot change; the show was pushed back a half-hour to 3:30 p.m. (between "General Hospital" and "The Dating Game"). But as this souped-up new "Dark Shadows" caught on with schoolkids, ABC was deluged with letters pleading for the show to return to 4 o'clock. ABC granted the request in July 1968 -- not a moment too soon, because hunky David Selby (later of "Falcon Crest") had joined the cast as Quentin Collins, the Heathcliffian werewolf, propelling "Dark Shadows" into full-fledged teen fandom. In 1969, an eight-month-long 1897 flashback featuring Quentin brought the show its highest ratings ever; a recurring piece of music from those episodes, "Quentin's Theme," made Billboard's Top 20 singles chart and was nominated for a Grammy.

But, as any Backstreet Boy will tell you, the love of teenage girls is a capricious thing, and by 1971 "Dark Shadows" was in a ratings slide. ABC pulled the plug on the show on April 2, 1971, after 1,225 episodes and two feature films (the second, "Night of Dark Shadows," was released after the show went off the air). Hardcore fans continued holding conventions and badgering TV stations to air the show in rerun; finally, in 1975, "Dark Shadows" went into syndication (minus the early non-Barnabas episodes). It even aired on PBS stations during the '80s, before the Sci Fi Channel acquired the entire archive of episodes.

Exhaustive collections of episodes have long been available on videocassette, and MPI Home Video recently released the first "Dark Shadows" DVD set, 40 episodes on four discs, beginning with the first appearance of Barnabas. A pointless 1991 NBC prime-time remake starring Ben Cross as Barnabas lasted only 12 episodes, and rightfully so -- "Dark Shadows" just wasn't the same with a big budget and state-of-the-art production values.

And that's because its limitations made "Dark Shadows" the intimate spook show it was. The flat look of the videotape, especially in the early black-and-white episodes, contributed to the foreboding mood. The lack of realistic exterior scenes and the soap opera necessity of setting most of the action indoors (usually with a raging storm outside) gave the show a heart-thumping sense of claustrophobia and entrapment, of horror burrowing into confined spaces. "Dark Shadows" may not have been a masterpiece of sleek special effects, but it was a masterpiece of haunted house lore, a campfire story that tricked us into imagining gore that wasn't there. "Dark Shadows" scared the living daylights out of us, in the lengthening shadows of the afternoon.