The junior senator from New York defends herself against White House charges that she played politics with news of 9/11 warnings -- but she won't fire back. 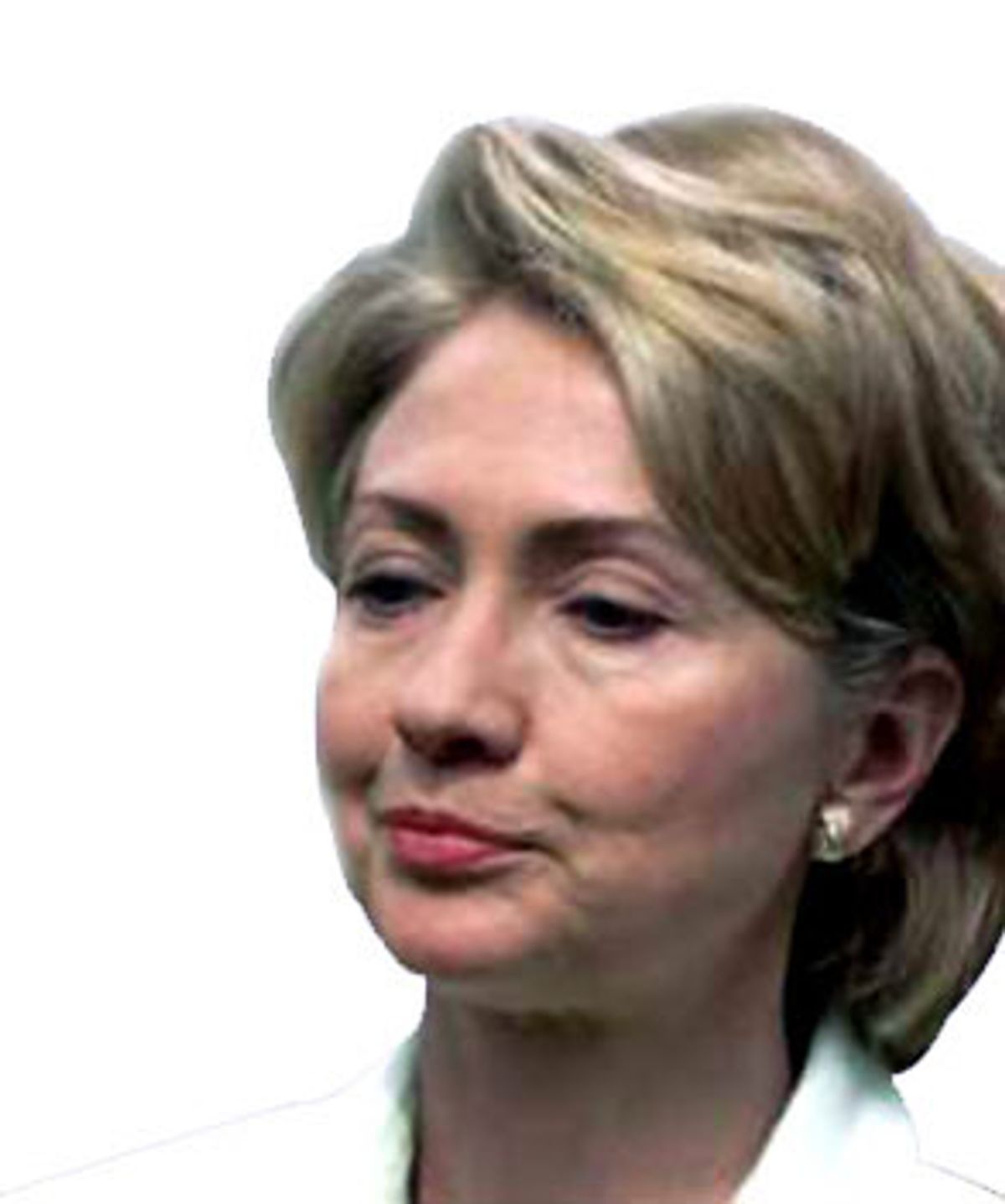 When the media sharks were circling late last week over disclosures that President Bush was briefed about possible al-Qaida hijackings before Sept. 11, Bush loyalists went into a familiar defensive crouch. Not only did they coordinate a counterattack accusing Democrats of playing politics, involving everyone from Dick Cheney to Laura Bush, White house spokesman Ari Fleischer singled out one Democrat in particular -- the junior senator from the state of New York.

"When there was a suggestion that Bush knew ... about 9/11, Mayor Bloomberg of New York said that suggestion was ridiculous," Fleischer said, referring to a New York Post headline from that morning. "I have to say with disappointment that Mrs. Clinton, having seen that same headline, did not call the White House, did not ask if it was accurate or not. Instead, she immediately went to the floor of the Senate, and I'm sorry to say that she followed that headline and divided."

Democratic critics say Fleischer's comments were out of line, and illustrate an apparent reflex within the White House war room -- when the going gets tough, blame a Clinton. And in an interview with Salon Tuesday, Clinton insisted her comments on the Senate floor Thursday were no different from those made by many other Democrats last week.

Here is the quote that attracted so much White House anger: "My constituents would like to know the answer to that and many other questions, not to blame the president or any other American but just to know, to learn from experience, to do all we can today to ensure that a 9/11 never happens again," Clinton said on the Senate floor Friday. In fact, other Democrats made tougher criticisms of the White House over the apparent failure to interpret and act on 9/11 warnings.

But Clinton refused to blame Fleischer for playing politics by singling her out.

"I think it's in our national interest to make sure that we have enough information to be able to take appropriate steps to defend ourselves," Clinton said. When asked about being singled out by the White House spokesman, a diplomatic Clinton refused the bait. "I'm not going to characterize their response," she said, but she made clear she was disappointed, if not surprised, by the tenor of Fleischer's comments.

Clinton may well be disappointed by the White House attack -- in person, she seemed almost to physically shrink from the possibility of being entangled in another partisan squabble, now that she's trying to be just another first-term senator. But the Fleischer assault made her halo shine nonetheless in liberal circles. On ABC, liberal commentator and Clinton critic George Stephanopolous (who wrote a tell-all about his time in the White House not too flattering to the first lady) sprang to her defense Sunday: "The first lady didn't say anything more -- in fact, Tom Daschle's words were far more vitriolic than hers. They know this rallies their base, no question about it."

But an administration official said Fleischer's comments Friday had their desired effect -- freezing efforts by congressional Democrats to shine a scandal spotlight on the Oval Office.

"There was a general tone on Thursday where it seemed like the other side thought they had an opportunity to score political points and didn't really care how they did it," said the official, who spoke on condition of anonymity. "We simply responded to attacks that were being leveled on us in a proportional way."

When asked if Sen. Clinton's comments constituted one such attack, the official said, "I don't think they were helpful." But the official said the response was not part of any "blame Clinton" strategy. "She's a figure. She's in a Senate seat that was once held by Bobby Kennedy and Patrick Moynihan. When she's on the floor and attacks us, it's going to be noticed."

Reprimands from the White House podium are nothing new. Throughout the myriad presidential scandals of the Clinton years, particularly during the former president's impeachment trial, White House spokesman Joe Lockhart often named Republicans he felt had crossed the line. But Lockhart says last week's comments by Fleischer were different.

"Our administration singled people out during impeachment. But calling out [Rep.] Tom DeLay, [R-Texas], is one thing; impeachment was all about politics. When it came to national security, there was always a line that's just not there anymore with this administration," Lockhart says. "We were pretty worked up during Kosovo when Sen. [Trent] Lott [R-Miss.], was out undermining what we were doing, but we were very careful not to accuse him."

Sen. Orrin Hatch, R-Utah, says the White House's criticism of Sen. Clinton's comments were based on what she said, not who she is. "Those kind of remarks under these circumstances, especially from the former president's wife, would have been better left unsaid. My gosh, if you want to find fault we can find plenty with the prior administration."

Hatch said the skirmish over 9/11 last week, and the playground-style rhetorical escalation that followed, was "unfortunate. Either side will try to blame anybody." He added: "I think people ought to lay off. Anybody who doubts that Bush would do everything in his power to protect this country is nuts."

Clinton insists that's not what she was suggesting. She was simply calling on the White House to be more forthcoming with information to help prevent future attacks, and in return was blindsided by Fleischer.

Both President and Hillary Clinton have been used as red meat by Republican fundraisers, since many party loyalists still despise the former first couple. But aides to Sen. Clinton say this is the first time since her election that their boss has been singled out for what they say are purely political reasons in the middle of a policy debate.

"The handy lightning rod is Senator Clinton. It's a good way to make sure the base doesn't go soft," said Lockhart, before throwing this jab about the administration's reaction last week: "They must have thought there was a reason to go out and shore up their base."

Whether you believe Fleischer's comments were an honest response to a perceived attack, or simply a tried-and-true political response to an escalating political war of words, there is already a long history of the Bush White House blaming the Clintons.

It began soon after Bush took office, with Fleischer encouraging discussion of a story leaked to the media about outgoing Clinton staffers vandalizing the White House. Fleischer said the White House would rather not talk about the allegations, yet simultaneously stoked the story by telling reporters the White House was "cataloguing" the damage. In the end, the Congressional Budget Office report said there was about $14,000 in damages, including the disappearance of a pair of historic door knobs, and dozens of missing "W" keys from White House keyboards. The investigation is estimated to have cost $200,000.

When the clamor began about an economic slowdown on Bush's watch, Fleischer once again noted that the recession started on Clinton's watch. Fleischer's comments were similar to the ones he made Friday. In essence, he said, it doesn't matter who started it, but in case you're wondering, it was the other guy. "The market correction, market decline began in March of 2000. [Gross Domestic Product] growth started to drop precipitously in the summer of 2000 and the fall of 2000. That's the facts. But the president thinks it doesn't matter when it began. What matters is how to fix it."

The pattern continued when Bush came under fire during the Enron collapse in January. As the administration tried to distance itself from any affiliation with Enron -- even insinuating that Ken Lay, the former Enron CEO and Bush's largest political donor, supported Democrat Ann Richards against George Bush in the 1994 Texas governor's race -- White House counselor Karen Hughes tried to implicate the previous administration. "Many of the things at Enron that went wrong occurred back in 1997 and 1998, during the Clinton administration," Hughes said.

Perhaps the most egregious example of the White House blaming the Clintons came a month later. In response to increased complaints from Democrats that the White House was ignoring the Middle East, Fleischer suggested Clinton's efforts to broker a peace deal in the closing days of his presidency were responsible for the increased bloodshed between Palestinians and Israelis.

"In an attempt to shoot the moon and get nothing, more violence resulted," he told reporters. Fleischer later retracted those statements, saying, "I mistakenly suggested that increasing violence in the Middle East was attributable to the peace efforts that were underway in 2000," Fleischer said." No United States president, including President Clinton, is to blame for violence in the Middle East."

All this from a White House whose leader campaigned against an administration they said practiced the philosophy of "If you've got a problem, blame somebody else." Lockhart says Bush's promises to "change the tone" in Washington have proven meaningless.

"This president came to town saying he would change all that," Lockhart says. "What he's doing is nothing new, but in light of that promise, it's all incredibly hypocritical."

Riding the internal subway system from the Senate chamber back to her office, the grizzled scandal veteran insisted she's moved on from the flap over the Fleischer attack. "As members of the Senate, we were simply exercising our responsibility to ask questions," Clinton said calmly. On a day the White House issued another terror warning, this time about New York City landmarks, her constituents no doubt hope she keeps asking questions.