Christopher Nolan's creepy, big budget thriller -- his first film since "Memento" -- is the kind of film Hitchcock would make. 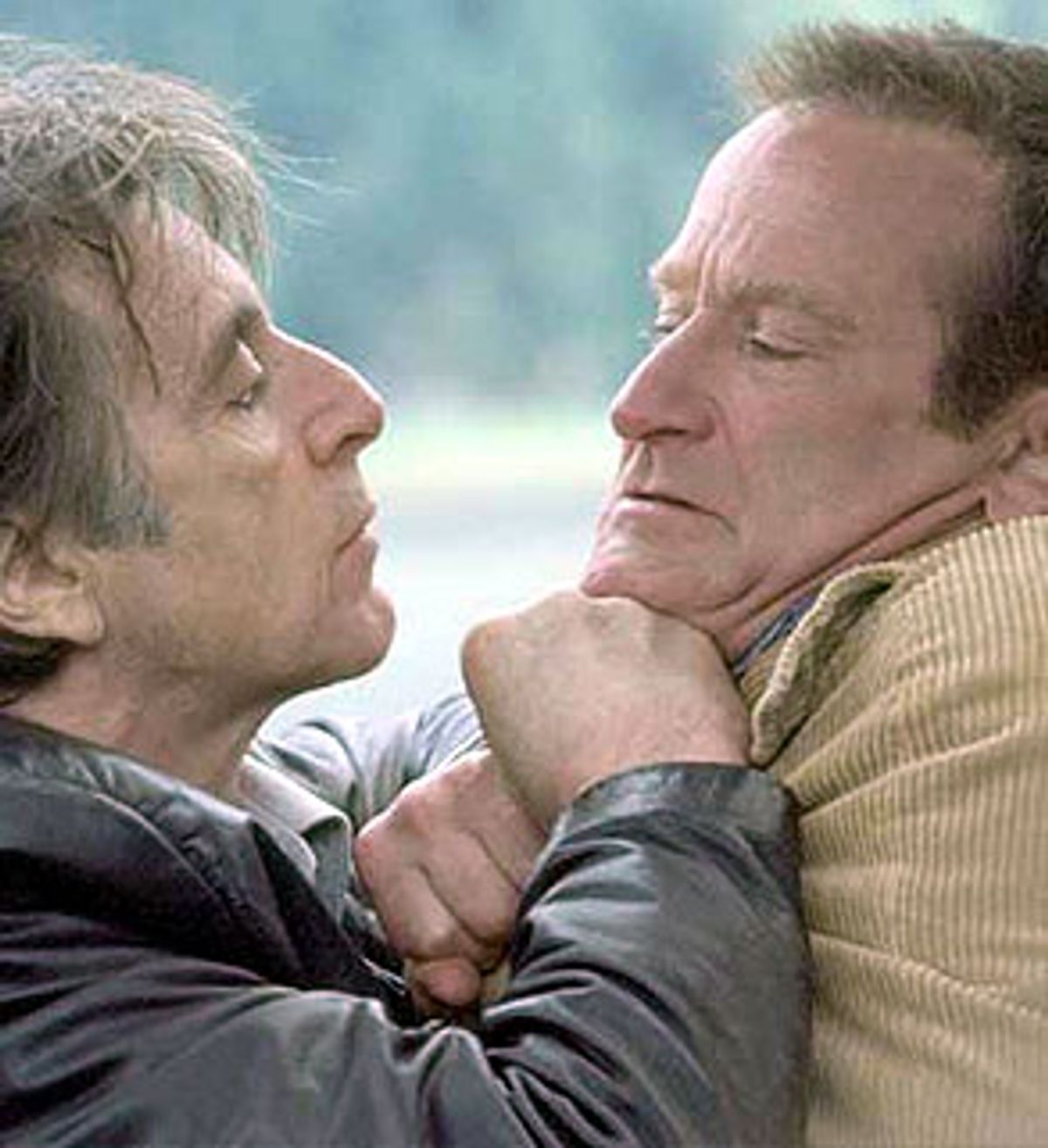 Has Christopher Nolan told you about his condition? He's unable to make movies unless they're about men suffering from strange neurological afflictions, men so plagued by guilt over what they may or may not have done that the entire world becomes a distorted reflection of their psychological distress, men searching for killers when what they really need to do is take a long, hard look in the mirror.

Of course, Nolan is not the first young director of thrillers to exhibit obsessive-compulsive tendencies. The good news is that, based on the evidence of "Insomnia," his big-budget follow-up to the cult smash "Memento," Nolan seems to be the genuine article, weirdo-genius-wise. Unlike the vast majority of aspiring Hitchcocks before him -- clever kids with no real interest in human behavior, whose movies are a collection of in-jokes and stylistic tics -- Nolan believes in the paranoid universes he creates.

Comparing a 31-year-old director with three films on his résumé (and that's including Nolan's first feature, the zero-budget indie "Following") to the Master of Suspense is patently unfair, but it's also inevitable. And for once I don't mean it as a putdown. I can think of no other contemporary director who is actually making the kinds of films Hitchcock would be making now, as opposed to slavishly imitating this or that camera angle from "Strangers on a Train" in the hope of lending significance to some piece of perfunctory and insincere crap.

"Insomnia" may disappoint hardcore "Memento" devotees. The story, about a wayward L.A. cop who loses his grip on reality while investigating a murder in Alaska, isn't told backward or sideways or upside down. No one will need a detailed online exegesis to figure out what happens. It's merely a gripping mainstream thriller with a first-rate cast, a peculiar setting that is as much psychological as geographical and a clammy, claustrophobic atmosphere. As in all good thrillers -- as in "Memento," for example, beneath the reverse narrative and the geek-boy puzzler -- the questions in "Insomnia" are simple and speak to our profoundest level of moral uneasiness. How can we tell good people from bad? Do we ever really know what we want? Are men always weaselly scum and women always treacherous bitches? (Answers: We can't, no and yes.)

This film is adapted (by screenwriter Hillary Seitz) from the 1997 Norwegian film of the same name, directed by Erik Skjoldbærg, in which Stellan Skarsgård plays the Oslo homicide investigator sent to the far north, where he finds the constant daylight of the Arctic summer a little hard to take. Skjoldbærg's "Insomnia" makes a virtue out of its anti-Hollywood intimacy and the barrenness of its rural setting, and at times you can feel Nolan struggling for something of the same effect on perhaps 20 times the budget. Again, fans of the original may decide to feel superior to this multiplex remake, but I think Nolan's success here is grounds for celebration. In a year that so far has offered little more than dippy, die-stamped Hollywood product, here's proof that it's still possible to make pop-oriented yet personal movies with an A-list cast and a zillion bucks.

With three Oscar-winners in the cast (count 'em), many directors would get out of the way of all those oversize egos and let them wander the script's verdant fields, chewing on whatever they will. Nolan pretty well keeps his stars focused and under control, which in the case of Robin Williams is something of a miracle (we'll get to that later). But "Insomnia" belongs unambiguously to Al Pacino, who looks even more like a thrice-boiled tea bag here than he did in "The Insider." If Pacino can and often does turn a sigh or a sip of coffee into an operatic gesture worthy of a Shakespeare-festival Shylock, this remains by his standards a restrained performance.

Pacino plays Will Dormer, a legendary Los Angeles detective who has been lent out to the northern Alaska town of Nightmute, where the grisly murder of a local young woman has authorities puzzled. (If you ask me, the combination of the town's name and Dormer's -- approximately the verb "to sleep" in any Romance language -- is pushing the outer boundaries of screenplay cleverness.) No, it isn't all that likely a setup, but never mind. A former L.A. colleague of Will's who now works in Nightmute assures him that police work isn't that different in the great white north: "There are good guys. There are bad guys. There's just a lot less public relations."

Nolan supplies the requisite helicopter shots of the stunning wilderness surrounding Nightmute (for once, the Hollywood propensity to shoot every movie in Canada is justified), but nobody's going to confuse him with David Lean; he's not interested in scenery for its pictorial merits. Those images, in fact, reminded me of the shots of endless Rocky Mountain forest at the beginning of Stanley Kubrick's "The Shining," a not-too-distant cousin to this film. In both cases, the director sees the wilderness almost entirely in metaphorical terms, as a visual corollary to the uprooted, isolated psychology of his main character.

Will is embraced, almost literally, by Ellie Burr (Hilary Swank), a puppyish Nightmute cop who has studied his most famous homicide investigations and looks to him as an acolyte looks to a doughnut-fueled guru. Ellie's not in drag or anything, but this is a pretty boy-like role; perhaps after her disastrous performance in "The Affair of the Necklace" Swank is more at peace with the androgyny that seems central to her screen persona. It's interesting, in fact, that there's no sexual or romantic undertone to Ellie's relationship with Will (or for that matter anywhere else in this supremely chaste film).

Speaking of the Nightmute killer, Will tells the worshipful Ellie, "This guy crossed the line and didn't even blink. You don't come back from that." Briefly, in a few early scenes that seem to reveal very little, Nolan and Seitz put everything in "Insomnia" on the table. Will and his partner Hap (Martin Donovan) have been exiled to Alaska while a police corruption scandal, in which both may be implicated, unfolds in California. Ellie will have to decide whether Will is really the man she thinks he is, or is in fact a guy who crossed the line and can't come back. Bedeviled by the sun that never sets and by whatever's buzzing in his head, Will can't sleep.

When Will and Hap pursue the murder suspect onto a rocky, fog-shrouded beach -- once again, a creepy landscape that seems more allegorical than real -- shots are fired and Hap goes down, convinced that Will has shot him deliberately to shut him up. (Hold those cards and letters, people: Nothing that happens in the first 20 minutes and is obvious in the trailer can be considered a spoiler.) Has he? Even Will doesn't know for sure, but just in case, he lies to Hap's wife, lies to Ellie, meddles with the evidence and generally engages in a Nixonian coverup that can only make things worse.

Then Will starts to get sympathetic late-night phone calls from the principal murder suspect, a mild-mannered local mystery writer named Walter Finch (Williams). "Are you seeing things?" Walter asks. "Little trails? Flashes of light?" Walter insists that he and Will aren't so different. He hadn't meant to kill that girl either, honest. It was like Hap's death; it just sort of happened. Considering how similar their situations are, maybe they can work something out. Will blunders through the endless Alaskan daylight like an aging circus bear, and Ellie quotes his own ghostwritten wisdom back at him: "A good cop can't sleep because part of the puzzle is missing. A bad cop can't sleep because his conscience won't let him."

Anything you might want to say about Williams' delicate performance here is true: Playing a psychopath is clearly a smart career move -- in fact, it smacks of career advice from an agent or publicist -- and he has always excelled at characters whose surface is subtly at odds with what's inside them. But the thing about "Insomnia" is that Walter really doesn't matter. When Will tells him, in that trademark Pacino combination of singsong and growl, "You're about as mysterious to me as a blocked toilet is to a fuckin' plumber," he's not kidding.

Walter is a device that forces Will to come to grips with his own guilt and try to expiate it -- in one unforgettable scene, he virtually drowns in it -- to commit his worst crimes and try to forgive himself. And, of course, to travel into the deepest busted-wiper-blade visions of insomniac delusion that Nolan can conjure up. Strictly in terms of plot, "Insomnia" isn't much of a mystery. But like the best thrillers it dives below the ordered surface of the genre into the coldest waters of the individual soul, where Hitchcock and David Lynch and Dostoyevsky have ventured. Does Christopher Nolan belong in that company? Not quite yet, but he's on the way.