This debut film by Roman Coppola (son of Francis) is a frothy, sexy, '60s delight with a movie lover's heart. 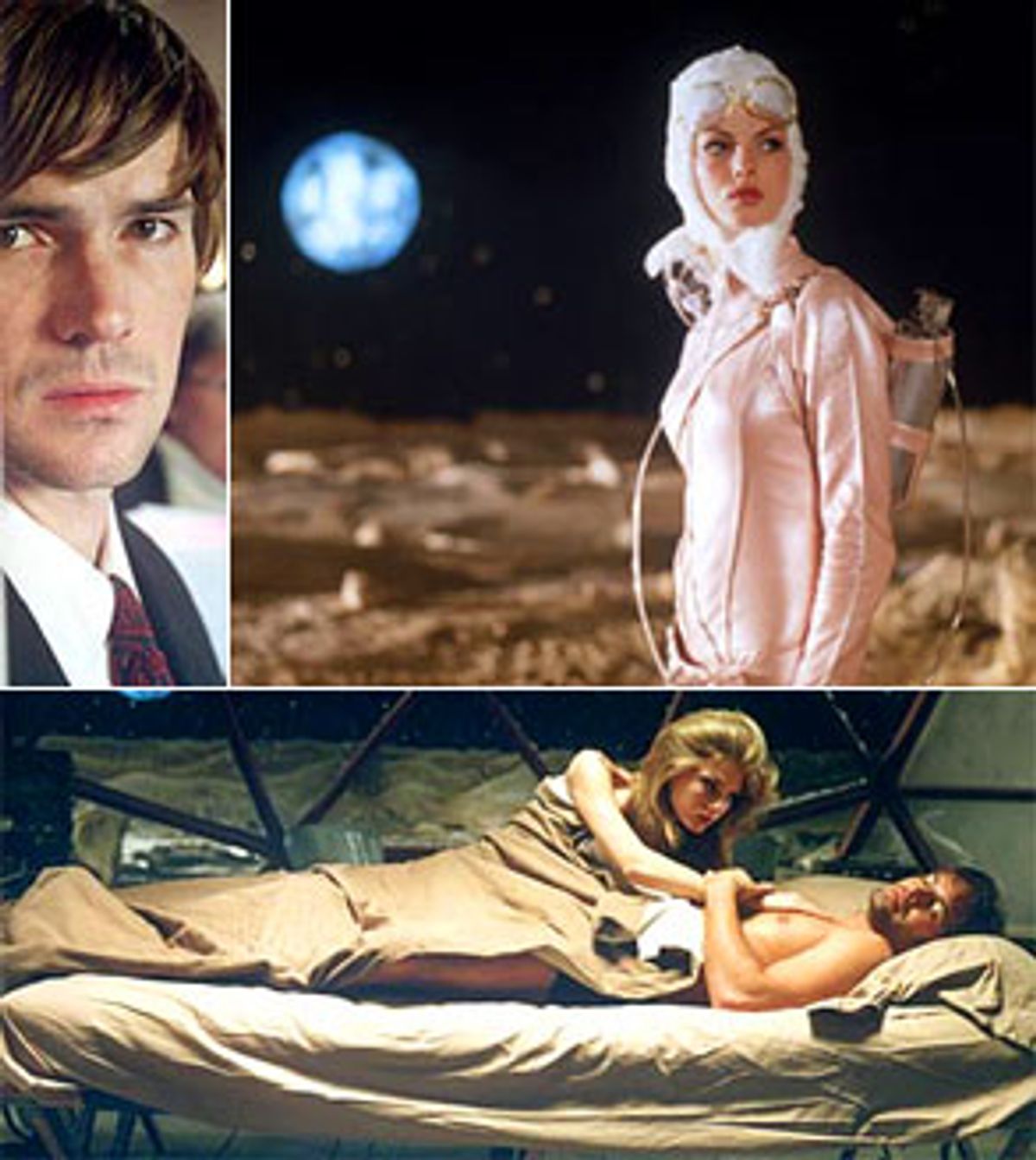 The movies we love best don't necessarily stick with us as distinct wholes but as flashes of images that can strike, cobralike, in our memories at any time. We carry them around with us daily, year after year, adding to them gradually, accumulating private archives of memorized visions that give us the most sharply felt pleasure.

As professionals, filmmakers reference significant movies all the time, but dedicated civilian moviegoers (and critics) may rifle through the libraries we carry in our brains just as often as they do, if not more. And every once in a while, a filmmaker will make a movie with a professional's skill but a movie lover's eye, offering a vision that's like a valentine made by the most talented kid in art class. Watching these movies is like poring over shared scrapbooks and discovering that someone has clipped and saved the same pictures, finding beauty in the same odd mix of things that you have.

With his first feature, "CQ," Roman Coppola opens his scrapbook wide. There's an aura of knowing ridiculousness about the movie: It's a fable about an American film editor living in France in 1969 who has been assigned to work on an Italian-made sci-fi fantasy called "Dragonfly" but who is more obsessed with making his own, more personal (and therefore, he believes, more significant) film.

And yet "CQ"'s awareness of its own absurdity is one of the things that make it so joyous and ultimately even moving. Directing with a beautifully light touch, Coppola simultaneously sends up self-absorbed young filmmakers and acknowledges that, to give anything of value to the world, they also have to give up something of themselves. Their narcissism becomes a slippery, reflective surface; real life doesn't stick to it, but it's a powerful emulsion for translating memories of life half-lived into resonant words and pictures.

The boy at the center of "CQ," Paul (Jeremy Davies), is the stand-in for every young, tortured filmmaker we've ever come to know and love-hate. He dislikes his job: "Dragonfly" is too pop for his sensibility and his dreams, and yet we also see how its plasticky colorfulness seduces him against his will. And then, of course, there's its star, Valentine (Angela Lindvall), who plays the high-class, high-cost futuristic double agent, Dragonfly. She slinks through the movie within a movie in a pearlized pink leather flight suit -- or, alternatively, rolls blissfully on the bed in the altogether in a flurry of bills, the money being blown in through a slot in her bedroom as payment from the big government agency she's working for.

Paul is transfixed by Valentine, and ultimately, when he has the chance to take over the direction of "Dragonfly," throws himself wholeheartedly into making it as good as it can be, though not so much for her sake as for his own. Its glossy surface is a far cry from his personal pet project, a black-and-white 16mm film that shows him addressing the camera as he sits on his toilet, sharing what he thinks are his deepest thoughts and artistic obsessions -- that's his idea of complete honesty in filmmaking.

Between "Dragonfly" and his personal moviemaking ambitions, Paul's pouty and oh-so-French girlfriend, Marlene (Élodie Bouchez), feels lost in the shuffle. When Paul explains to her that he's seeking to "capture what's real," she steps in front of his lens and shoots back, "What if it's boring? Did you ever think about that?"

Paul, who's played by Davies with just the right amount of sympathetic blankness, hasn't thought about it, but Coppola has. "CQ" is a meditation both on the joys and the limitations of art -- and on the way that sometimes when we seek to make art, we succeed only in fostering boredom, but when we look the other way it magically appears. Paul's movie is much less interesting than the operatically silly "Dragonfly," which has the look and feel of ridiculous extravaganzas like "Modesty Blaise," "The 10th Victim" and, of course, "Barbarella."

Early on, Coppola introduces the "irony" that such a goofy film could be made in the wake of the 1968 Paris riots (Valentine is even a student protester turned starlet). But it's really not an irony at all, and Coppola knows it -- pop culture is a wildflower that springs up alongside and in between political events, becoming intertwined with them only at whim. The '60s were an era in which old hands at moviemaking were often teamed with young hipsters in an effort to grab on to the youth market: Here, the old-timers are represented by Giancarlo Giannini, doing a wonderful impersonation of Dino De Laurentiis, and the "now" generation is spoken for by Jason Schwartzman, who's hilarious as a professional director du jour in tight pants and wild, space-age eyeglasses.

"CQ" isn't a big statement movie, and it's likely that some moviegoers will dismiss it as being not weighty or meaningful enough to make a lasting impression. But the way Coppola professes his love for movies -- both colorful pop junk and the classics that unequivocally qualify as art -- is giddily entertaining. "CQ" is a picture cobbled together from found images: Within the movie's first five minutes there's a bald reference to the famous coffee-cup reverie from Jean-Luc Godard's "Two or Three Things I Know About Her," to let us know exactly what we're in for.

But even though Coppola knows and loves his '60s French cinema, referencing Godard movies like "Contempt" and "Pierrot le Fou," and even dressing Paul in the trim dark suit, white shirt and tie that seemed to be Godard's public uniform in the '60s, his movie isn't a know-it-all textbook. If anything, he's more interested in the emotional substance of filmmakers like Godard and François Truffaut than in their intellectual ideas, which, particularly in Godard's case, were frequently wobbly.

And, as a lover makes his beloved feel and thus look her most beautiful, Coppola revels in the look, the music and the vibe of the cheerfully absurd "Dragonfly," his movie within a movie. When Dragonfly travels to the moon to capture an intensely erotic-looking secret weapon from the dangerous revolutionary who's sequestered there (he's played, wonderfully, by Billy Zane, whose wooden handsomeness is perfect for a well-meaning but robotically programmed freedom fighter), flakes of interplanetary snow drift down on her space pod.

Later, Dragonfly returns to Earth in that pod, and it lands atop the Eiffel Tower. When Dragonfly steps naked into her shower, against a soundtrack of whimsically sexy pop music, a giant colored dot on the glass door wittily hides her essential curves. (The man responsible for "CQ"'s marvelous production design is Dean Tavoularis, who has frequently collaborated with Roman Coppola's father, Francis Ford Coppola.)

Coppola frames many of his scenes as if they were comic-book panels, but they're always lively compositions: The movie is never static. (His cinematographer, Robert D. Yeoman, works visual magic with both drab Paris flats and dreamy moonscapes.) Nor does its pleasurable, cartoonish quality ever override its heart. Coppola drops all the right pop references without being insufferably retro-French about them -- he may harbor a fondness for Serge Gainsbourg and white shag rugs, but he doesn't treat them as badges of kitschy hipness.

And when it's time to come through with the real goods, he delivers bravely: Paul, having fallen hard for Valentine, sits in the darkened room editing footage of her; he stops the film to stare at her face, and when he reaches out to touch the image, it's clear to us, if not to him, that this is the best way he can possibly love her. We're proved right, not by the way Paul's romance with her plays out but by the way his relationship with Marlene ends: After she finally walks out on him, hurt and distraught, his "personal" film ends up being all about her. She's more lovely, and more lovable, in his film vision of her than she had ever been in real life.

"CQ" tussles with some of the same ideas as Olivier Assayas' "Irma Vep" did -- chiefly, the notion that a filmmaker's love for his images can come close to destroying him -- although its poetry has a glossier shine. But its lightness shouldn't be held against it. Coppola has a quality that's much rarer in young filmmakers than raw talent: a sensibility. One of his characters proclaims sternly, "You need to connect things so they make us feel something!" And stringing together elements as seemingly random as a space pod landing on the Eiffel Tower and the vision of the sorrowful Marlene captured by Paul's obsessively focused camera, Coppola does.