In the Hindu world the pursuit of sexual pleasure was revered as a sort of religious quest. Imagine a world where getting laid was just as important as going to church on Easter. 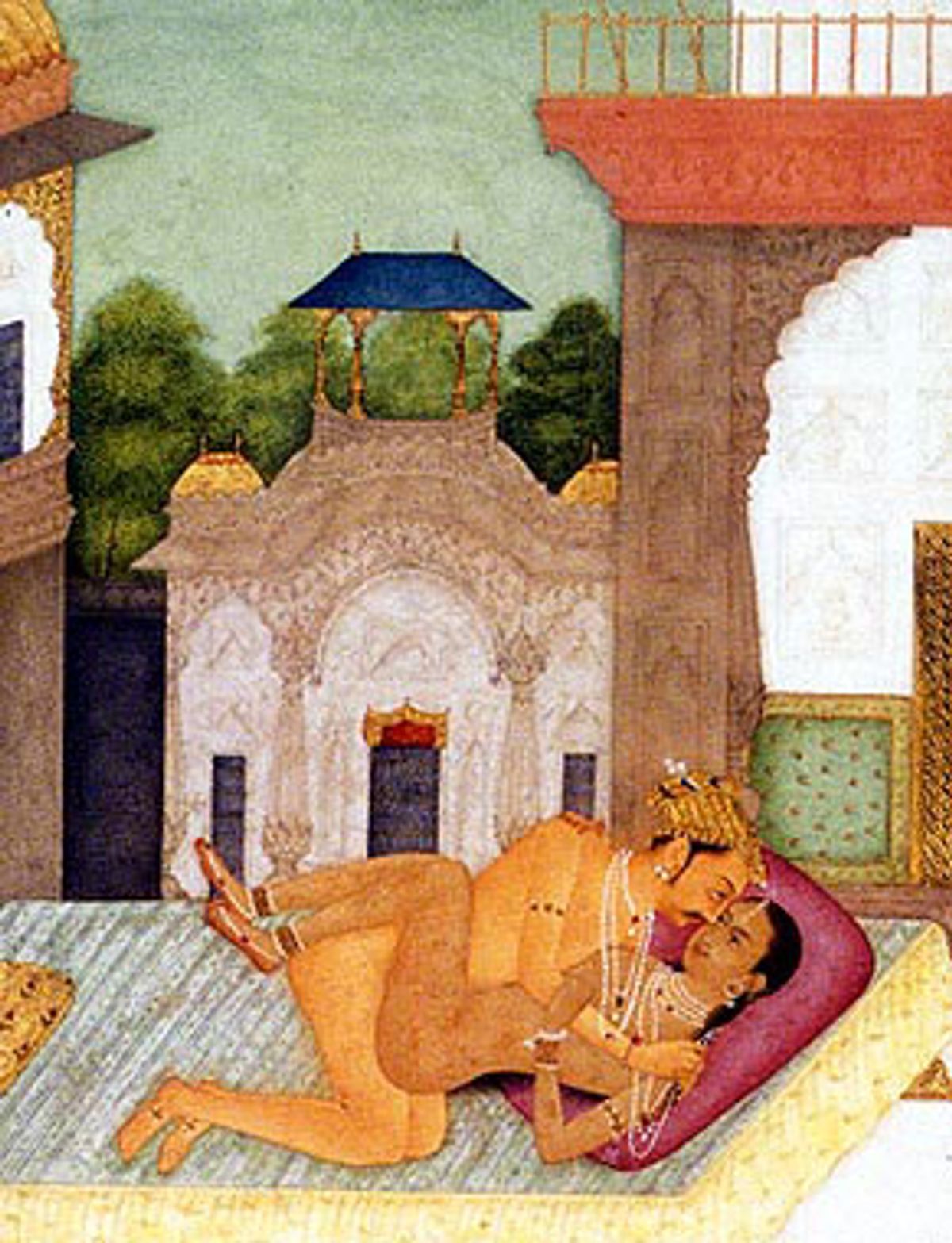 But few Americans have read it -- not even the "good parts," the sexual positions that made the book famous, but that account for only about one-quarter of its length (46 of 172 pages). Even those who have read the major English translation of the "Kamasutra" have not fully appreciated the book because that translation -- how can I put this delicately? Well, it sucks. It dates from 1883 and was published just once in the U.S., 40 years ago in 1962. Richard Burton, the British army officer responsible for it, was the editor from hell. He altered the text considerably to shoehorn it into Victorian views about sexuality, notably the then popular notions that only men experience sexual desire and pleasure, and that women are nothing more than the passive recipients of men's lust.

Some 1,700 years after it was written, the English-speaking world is about to get its first glimpse of what the real "Kamasutra" says, thanks to a new translation scheduled to appear in June. It rights the many wrongs Burton did to the text, and reveals the "Kamasutra" for what it truly is -- a guidebook for cultivating a highly eroticized life. It's "Sex and the City" circa A.D. 300, only the focus is on men instead of Sarah Jessica Parker and her girlfriends (though some of the text is clearly intended for fourth century Indian women).

The new translation reveals a "Kamasutra" in some ways remarkably modern and progressive: Women are as sexual as men, and men should work to provide women with erotic pleasure, including orgasms. But before you embrace the book as your new sexual bible, be forewarned. Some of what it says is controversial: Adultery is a fact of life and it's all right, even fun -- for men only -- as long as the women's husbands don't find out. Some of the "Kamasutra" is callous and repugnant: If a woman persistently refuses a man's advances, he is justified in raping her. Perhaps most remarkable, the "Kamasutra"'s vaunted sex advice is surprisingly tame. For example, the book expresses considerable ambivalence about oral sex, a very popular universal element in modern Western lovemaking.

The new translation (published by Oxford University Press) has been compiled by Wendy Doniger, a professor of the history of religions at the University of Chicago, and Sudhir Kakar, an Indian psychoanalyst and senior fellow at Center for Study of World Religions at Harvard. They returned to the original Sanskrit, and produced a translation at once more honest and more erotic than its Victorian predecessor. They also include copious notes that place the text in its historical and linguistic context, rather like a well-annotated edition of a Shakespeare play. I doubt the Doniger-Kakar "Kamasutra" will make the bestseller list, but if you're a serious student of sex, or of India, or if you and your honey want to read each other a different kind of pillow book, the new translation is fascinating, thought-provoking and occasionally even amusing.

The "Kamasutra" was written by one Vatsyayana Mallanaga, about whom nothing else is known. However, from the text, it's clear that he was upper-class. He takes servants for granted, and assumes his readers have the leisure time to seduce virgins and other men's wives, and the money to buy the gifts he recommends giving to do so. Vatsyayana also claims to have written his treatise "in chastity and highest meditation." It's hard to know what to make of this. Some commentators have scoffed that, given the subject matter, this seems highly unlikely. But considering the reverence with which the ancient Hindus approached matters sexual, it's also possible that Vatsyayana wrote his book with the gravity of, say, a modern-art critic discussing a cache of just-discovered erotic paintings by Picasso. We'll never know.

The sexual culture it describes is also surprisingly like our own. While the "Kamasutra" describes girls and women as dependent on their fathers, husbands and adult sons -- in the manner of women in today's Arab Middle East -- in the India of the text, they enjoyed an independence and freedom of movement Saudi or Pakistani women can only dream of. While their wealthy fathers and husbands were running businesses and the government -- not to mention fucking around -- young women were often free to date men and select their own husbands, and married women were free to select lovers and entertain them.

The "Kamasutra" is organized in seven sections that track men through life. In Book 1, the bachelor sets up his pad. In Book 2, he perfects his sexual techniques. This is the book that has inspired the videos, games and everything else that flies the "Kamasutra" flag. In Book 3, our young man seduces a virgin. In Book 4, he marries and sets up a household for his wife and servants. By Book 5, he has grown sexually bored with his wife, and turns to seducing other men's wives. Eventually, as he ages, the effort necessary for such dalliances loses its charm, so in Book 6, he takes up with courtesans, who work to please him -- but for a price. Finally, in old age, he fears he is losing his potency and attractiveness, so Book 7 contains recipes for herbal potions to preserve them.

Although Vatsyayana was a man writing for men, some of the "Kamasutra" speaks directly to women: Book 3 tells virgins how to attract husbands. Book 4 instructs women how to be good wives. Book 6 deals with the skills required of courtesans -- including how they should provide for their own old age by stealing from their patrons. This information does not seem odd until you realize that in fourth century India, few if any women could read. It's not clear how they obtained the "Kamasutra's" information. Apparently, some did. Presumably literate men read it to them, as clergy a few centuries ago read the Bible to illiterate congregants.

Of the "Kamasutra's" seven sections, Books 2 through 5 are the most interesting -- unless you have a mistress, in which case Book 6 is worth a look.

Book 2, the sex manual, recognizes women as full, lusty participants in sex, and exhorts men to learn ejaculatory control to last long enough to bring them to orgasm: "Women love the man whose sexual energy lasts a long time, but they resent a man whose energy ends quickly because he stops before they reach a climax." (Apparently, Vatsyayana didn't know that many women never reach orgasm solely from intercourse no matter how long it lasts.) Nonetheless, the "Kamasutra" is very attentive to women's pleasure, a view that arrived in our culture only a few decades ago, a view still lost on many men.

Book 2 advocates use of sex toys, and suggests sex while bathing. It also describes how a man can best satisfy two women at the same time (fondle one while having intercourse with the other), and how two or more men should comport themselves when sexually sharing one woman (take turns having intercourse, and while one is inside her, the others should fondle her).

Earlier I mentioned the "Kamasutra's" unexpected aversion to oral sex. Vatsyayana declares, "It should not be done because it is opposed to the moral code." But apparently, he understood that ancient Indian men enjoyed blow jobs as much as men do today, because after condemning oral sex, he provides elaborate instructions to women on how to perform what the "Kamasutra" calls "sucking the mango." Then Vatsyayana reiterates his condemnation of oral sex, saying it should be enjoyed only with "loose women, servant girls, and masseuses" with whom a man "does not bother with acts of civility." Finally, in an ambivalent aside, he allows that some men enjoy sucking each other's mangoes, and that some even perform cunnilingus: "Sometimes men perform this act on women, transposing the procedure for kissing a mouth."

In Book 3, the "Kamasutra" insists that men who seduce virgins do so very tenderly. It advises courting a virgin for many days before bedding her. The suitor should engage her in interesting conversation, shower her with gifts, play board games with her, and work to win her trust, all the while remaining sexually abstinent to set her at ease. As the big moment approaches, he should send her little sculptures of goats and sheep with major erections. If she takes the hint, she should signal her willingness by flashing him -- "revealing the splendid parts of her body." Finally, they make a date to meet and have sex.

But tenderness toward women goes only so far in the "Kamasutra." If a virgin is unwilling to go all the way, men are instructed to have a brother ply her with liquor, and "when the drink has made her unconscious, he takes her maidenhead," i.e. he rapes her. In the "Kamasutra's" view, rape is acceptable not only for reluctant virgins, but also for other women: "A man may take widows, women who have no man to protect them, wandering women ascetics, and women beggars ... for he knows they are vulnerable ..."

The "Kamasutra" devotes only nine pages to the care of wives in Book 3, but almost three times the real estate, 26 pages, to Book 4, the seduction of other men's wives. It exhorts wives to be doting, dutiful, careful managers of servants, and always well-mannered, well-dressed and faithful. But it also assumes that wives eventually bore their husbands. As a result, a man is perfectly justified in seducing other men's wives, who are exciting, challenging, worthy of indefatigable pursuit, and great fun in bed. If a wife discovered that her husband had been unfaithful, she was over a barrel. In fourth century India, she couldn't leave him as a modern woman might. She was obligated to remain dutiful. But the "Kamasutra" allows her to be "mildly offended" and "scold him with abusive language." However, she was forbidden to resort to "love sorcery," i.e. herbal potions, to win him back, presumably because that might ruin his well-deserved adulterous fun.

When it comes to seducing other men's wives, the "Kamasutra" is not above a little shameless self-promotion either. It asks: Which men are the most successful at it? Those "who know the 'Kamasutra.'"

The "Kamasutra's" matter-of-fact acceptance of infidelity is tempered by only one caveat: Men were not to go that route if it was likely to "bring disaster," i.e. violence or financial reverses. To prevent disaster, the "Kamasutra" lists women who should be avoided, notably those who are "well guarded or with their mothers-in-law." Once a man has selected an eligible extramarital target, the "Kamasutra" instructs him to woo her with all the focus and creativity he would bring to courting a virgin, except that in the case of another man's wife, he had to be more stealthy and deceptive, which made the chase all the more exciting and intellectually diverting.

Of course, if a man seduced another man's wife, chances were good that some other sexually itchy gent might decide to seduce his. Wives were expected to be faithful, but with so many men getting action on the side, many wives must also have been cheating. The "Kamasutra" concludes its discussion of extramarital affairs by saying that it does not advocate philandering, but rather seeks to prevent it by describing all the ways libidinous lotharios might cuckold them in order to warn husbands worried about their wives' wandering eyes. Given the extraordinary detail with which the "Kamasutra" describes infidelity, I doubt that any fourth century reader believed this. (The "Kamasutra" does not discuss how a husband should deal with a wife's infidelities, but I doubt that all she got was a scolding.)