They care a lot

The cops, firefighters and paramedics of ABC's reality series "Boston 24/7" are so inspiring, dedicated and hardworking it's ... weirdly depressing. Still, just try to switch it off. 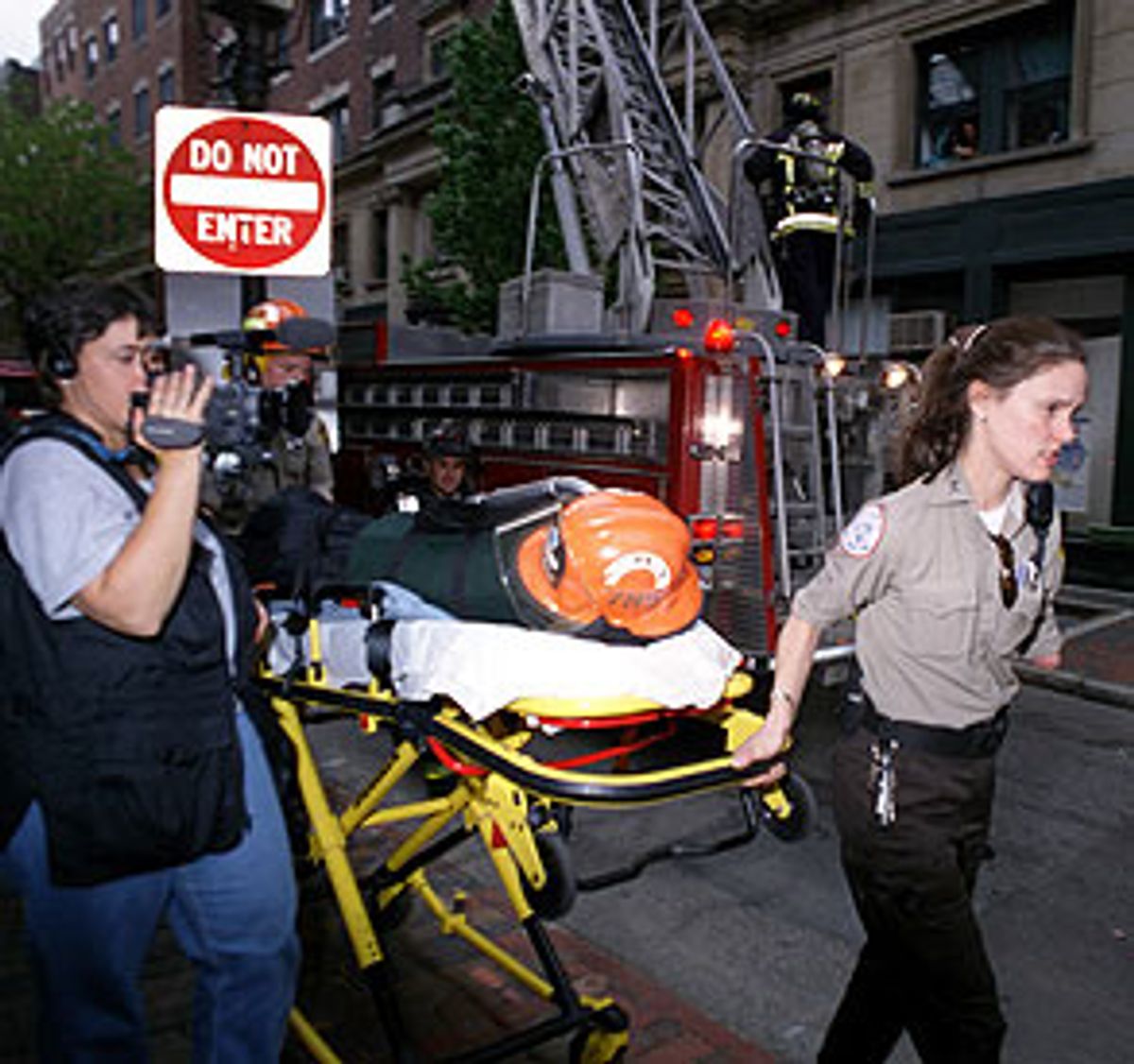 Right about now, there's some real-life cop/"NYPD Blue" consultant (or firefighter/"Third Watch" consultant, or district attorney/"The Practice" consultant) kicking himself for having given away all of his good material to the likes of Dick Wolf and David E. Kelley.

"Boston 24/7," which premiered Tuesday and continues through June 12, is the result of ABC News reporters spending three months filming a selection of civil servants in Beantown. The somewhat haphazard but engrossing six-part series documents the lives of the city's "unsung heroes" -- as they are described in ABC's press materials -- from Mayor Thomas Menino all the way down to the local ratcatcher. Over the course of six hours, we follow, among others, a homicide detective known as "Mr. Homicide"; a sunny, one-armed paramedic; a passionate prosecutor taking on a grisly rape-torture case; a second-generation firefighter who lost his father to the job; a genial principal at one of the city's toughest high schools; a platinum-maned tabloid reporter on the nocturnal disaster beat; an enthusiastic but still green D.A. on a losing streak; and a feisty victims advocate who isn't afraid to tell abused women exactly what she thinks of their boyfriends.

The thing about these heroes is that, well, stories like theirs have already been sung on every high-pitched, nerve-jangling, Steadicam drama from here to Burbank. And if the real-life versions of these archetypes are feeling the way freshman English teachers do when their students dismiss Shakespeare as clichéd, you can't blame them. The series smacks of déjà vu to the point where you might even find yourself mentally tossing out shorthand hybrid descriptions, like an overcaffeinated screenwriter in a pitch meeting. It's "Cops" meets "The West Wing"! It's "ER" meets "CSI"! It's "Boston Public" meets "Crossing Jordan"!

"Boston 24/7" was produced by ABC News senior producer Terence Wrong and executive producer Rudy Bednar, the team behind the award-winning "Hopkins 24/7." Whereas that series offered an in-depth look inside one of the country's most prestigious medical institutions, Johns Hopkins Medical Center, "Boston 24/7" ambitiously takes on Boston's entire human infrastructure. The result is a rather impressionistic portrait of life inside the grittier urban professions. The series ends before its most gruesome case is brought to trial, for instance, and a number of the subjects make you wish they'd gotten their own series even though they won't likely be revisited in this one.

It's the loose ends, however -- along with the alarming verdicts and scary diagnoses -- that distinguish these stories from their fictional counterparts. As the homicide detective points out after arresting a man suspected of murdering and decapitating his brother, murder cases are tougher than they appear on TV. "Those cop shows where 20 minutes later they have their guy -- that's bullshit." As for burrowing into the perpetrators' psyches for psychological motives: "You'd have to dig Freud up from the grave and ask him."

It's cracks like the Freud one that make "Boston 24/7" feel fresh compared to the spate of high-end dramatizations that make up most network prime-time lineups. Almost to a person, the subjects approach their jobs with a sense of humor and, at times, a fascinating wry detachment. The result is that the series is mercifully light on professional histrionics and heavy on great lines. In the forensic examiner's office to inspect some bloody socks that were used to tie up a rape-torture victim, prosecutor Mary Kelley remarks, "I would be so skinny if I worked here, because I'm telling you, all I'm having for lunch today is a Diet Coke."

Explaining why he decided to join the fire department even after his father died in a blaze, a young firefighter says, "Every fireman wants to put out a fire. That's why we drive around in red trucks and make a racket." When principal Chuck McAfee catches a student trying to slip a gun past the school's metal detector in plain view of the security camera, he laughs and says of his job, "Sometimes it's fun!" The ratcatcher, who somewhat disturbingly moonlights as a cook, applies his gourmand sensibilities to vermin control. "I don't like cheese," he says. "I don't think rats like cheese. I think rats like pepperoni because I like pepperoni."

"Boston 24/7" has already been criticized for the narrow view it takes of its host city, and it's true that Boston comes across here as little more than a seedy urban cipher. It could be anyplace, but not anyplace nice. The crack-house and courthouse views can make the series feel depressingly claustrophobic -- even the high school looks like a prison -- and except for a chef at one of the city's high-end restaurants, the show's subjects are almost entirely culled from the job sectors most likely to require dealing with blood and bodies. (The chef, we soon find out, has been included among the paramedics and the drug unit detectives because she's a former at-risk youth who pulled herself up from one of the city's grimmest housing projects.)

Perhaps the real problem lies in the series' title. A better one might have been "Selfless Workaholics 24/7" or "Jobs You Wouldn't Dream of Doing, But Thank God Somebody Does 24/7" or "People Who Are More Committed and Passionate Than You Are 24/7." Even if some of the jobs come across as less noble than others -- at times, the mayor's primary job duty seems to be feuding with the press, a task to which his press secretary is already devoted full-time -- the "24/7" part is right on the money. The young D.A. bungles his way through the first months of his job, losing cases and infuriating judges and bosses.

But that's no reason to fear the system; after all, he's committed and intent on improving. The real reason to fear the system is that he has to take a couple of bartending shifts in the evenings to cover his law-school loans. Unlike careerists from other walks of real life, like those featured on, say, the Style network, the characters on "Boston 24/7" don't have a lot of time for fashion-related nervous breakdowns. These people really work.

As a production, though, "Boston 24/7" is too slick to be entirely convincing, and its subjects are a tad too unanimously noble to allow us to believe that anything as comprehensive as Boston 24/7 is really being presented here. There's not a bad cop in the bunch. And while the effects of endemic poverty on a community provide nearly all the material, not much attention is paid to the fact that, without it, none of the prosecutors would have jobs.

Neither the victims of crime nor of poverty are given much of a voice, even when their hinted-at stories are heartbreakingly compelling. In one scene, for example, a high school boy swears violently at a teacher and puts his fist through a window after a meeting meant to improve their "communication" goes badly. But his rage at what he perceives as the teacher's condescending tone is far more eloquent on the subject than any social worker's.

The series begins on a seriously underwhelming note -- the city is threatened with a "storm of the century," and the mayor must decide whether to put more snow plows on the streets. And the stories, largely chosen for their shock appeal, feel disjointed throughout. Still, the aggregate feeling "Boston 24/7" inspires is one of awe and respect for its subjects, their commitment, their tirelessness and their incredibly steady nerves. The producers might not have let much sun into this cycle, but then that's the nature of "hard-hitting" TV news and rubbernecking audiences. As one cop, whose own father was taken away by the police when he was a boy, points out, "People don't call 911 and say, 'Can you send a police officer over here? We're having a Christmas party.'"