"Divine Secrets of the Ya-Ya Sisterhood"

This "message" flick by the writer of "Thelma and Louise" brays that women are strong and have got to stick together -- but it doesn't make you want to join the sisterhood. 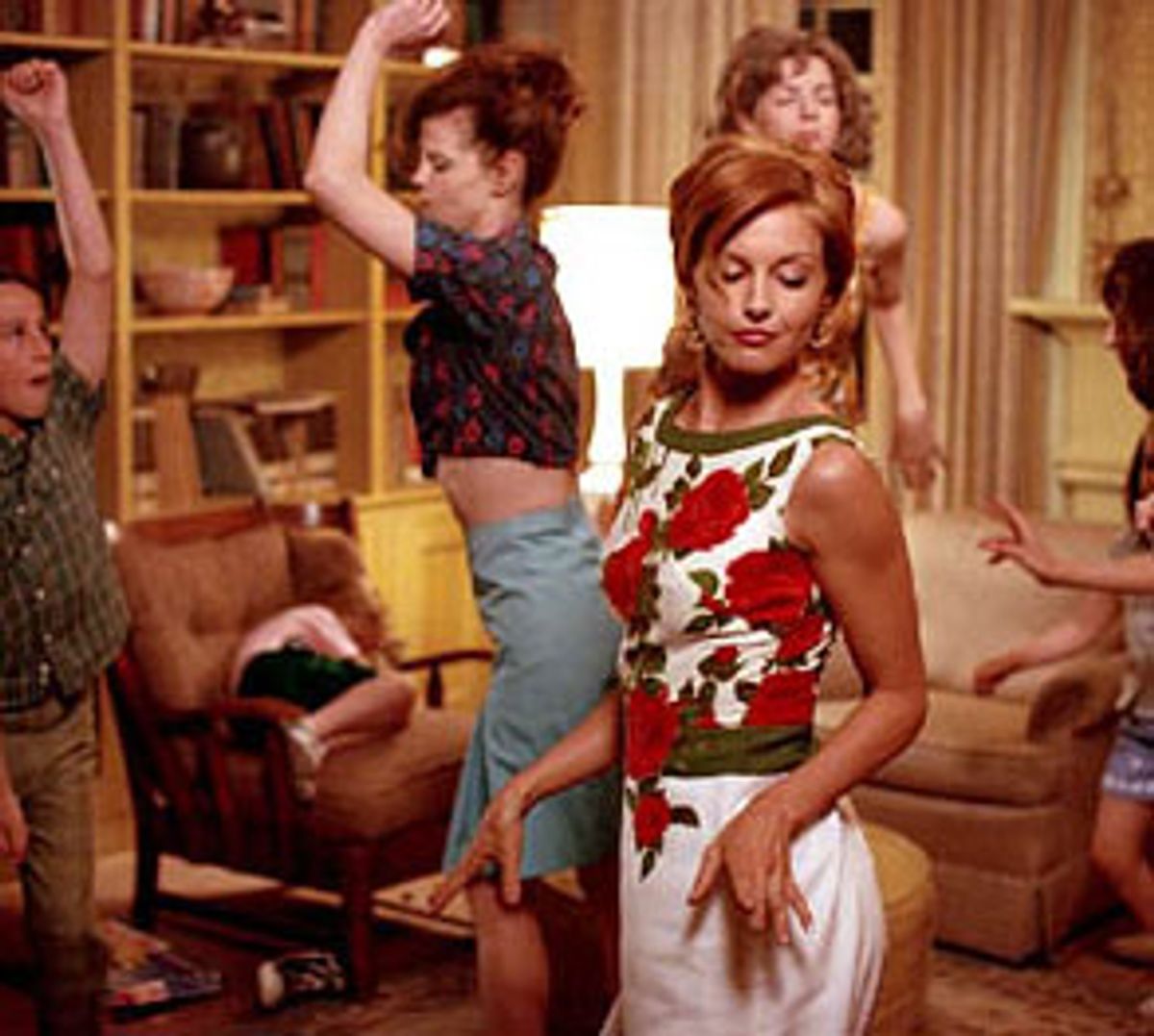 "Divine Secrets of the Ya-Ya Sisterhood" isn't so much a movie as a tract, a parable in which the charred wisdom of its characters is much more significant than the intricacies of their lives. Based on the hugely successful novel by Rebecca Wells, "Divine Secrets" is the saga of a Southern family and one young woman's coming to terms with its idiosyncrasies and deep-rooted problems.

The trouble is that its director, Callie Khouri (who wrote the infamous "Thelma and Louise," a movie that told us that brutish male behavior is A-OK, as long as women perpetrate it), is a point-maker, not a storyteller. The movie's main point, that sisterhood is powerful -- or, in this case, pahrful -- is hammered home in a hundred different ways. Those nailheads seal the movie off tight and clean: You get the sense that inside there are characters with real stories, begging to get out. Forget letting these characters talk -- Khouri chokes off their very breath.

Of course, "Divine Secrets" makes you feel as if you've settled in for a satisfying round of good old-fashioned family storytelling, the sort of thing you get, for better or worse, from movies like "Steel Magnolias." But before long, its story (Khouri and Mark Andrus adapted the book for the screen) starts to feel less like a complex tale of interwoven lives and more like tattered pieces of paper fluttering out of an old envelope or a yellowed scrapbook, disconnected from each other and from anything real or vital.

Vivi's three childhood friends, Teensy (Fionnula Flanagan, who valiantly tries to give a performance in the midst of all the point-making, and who looks astonishingly beautiful with her striking snowy coif), Necie (Shirley Knight) and Caro (Maggie Smith, who gets the movie's best lines and makes the most of them), rally 'round to try to help. They kidnap Sidda from her Manhattan home and whisk her back down below the Mason-Dixon line, where they hold her hostage and try to make her understand why her mama is the way she is.

Essentially, that means Sidda gets a good dose of "She ain't crazy, she's just Southern!" homey wisdom, even though the movie pretends to give us lots more dramatic weight. In the flashbacks, covering the '40s and '50s, Vivi is played by Ashley Judd. She's a spirited gal who really just wants to be the center of attention all the time -- no wonder the poor thing eventually suffers a nervous breakdown when she finds herself married to the wrong man, who nonetheless adores her (he's played, with hangdog likability, by James Garner), and has to take care of three kids who do things like get sick and throw up.

"Poor little Vivi!" the other Ya-Ya sisters collectively coo, trying to make Sidda understand why her mother is so special. As characters go, the other, lesser Ya-Yas are also apparently selfless saints. This sisterhood is more like a tyrannical kingdom, with Vivi as its queen bee. The other Ya-Yas barely appear in the flashback scenes with the young Vivi; occasionally we glimpse a young gal we assume is a fellow Ya-Ya, but their characters aren't fleshed out even in a minimally acceptable way. They're more vivid to us in their present-day guise, as an aged Greek chorus of murmuring sympathy. The fact that they drink and swear is supposed to make them seem lively to us. But mostly you just wonder why, if they're so no-nonsense, they ever put up with the ridiculous Vivi in the first place.

Of course there are reasons, with a capital "R," why Vivi turned out as she did: She had a perhaps overly doting father and a crazy-Catholic mother (the latter played by Cherry Jones, almost unrecognizable in her standard-issue religious-fanatic schoolmarm hairdo). And she drinks -- a lot. No wonder the poor lamb had to run roughshod all over her young children; with that glittering smile and boundless joie de vivre, she ought to have been a star, not a mom.

Khouri has a lot of sympathy for Vivi, and she assumes we'll feel it too. So why don't we? The movie comes off as sympathetic to people who suffer from mental illness and depression, but only in the most cursory way. Those afflictions are viewed as a charming quirk, an unfortunate side effect of wearing too many crinolines. In the flashback scenes we see Judd going after her children, lashing at them with a belt, and it's horrifying. But Sidda's eventual response to all the things the Ya-Yas have told her amounts to "Oh! I get it now!" That's far too smooth and facile a summation of what must have been a very complicated relationship.

And then there are all the other places Khouri carelessly drops the ball: Sidda supposedly has a big play about to open, and at first she rails a bit at her Ya-Ya captors for having taken her away from it. But it's not long before she settles into their more relaxed, Southern life, having cocktails during the day and wearing sneakers all the time. We see her calling her fiancé (played by Angus MacFadyen) on the phone, troubled by what she sees as their impending breakup, but we never again see or hear her worrying about her actual play. This is a movie where women's feelings and relationships are far more important than anything so mundane as their creative accomplishments.

And Sidda has siblings -- we see them in the flashbacks, particularly a memorable scene in which they're puking their hearts out -- but we never learn what's happened to them. Have they distanced themselves from their charming-slash-"difficult" mother and their alleged absentee father? (The movie tells us repeatedly that he was a remote dad who was never around, but as Garner plays him he's a sensible, warm and loving dad to Sidda, which makes no sense.) Do they have families of their own, or jobs? Do they even exist? Khouri never bothers to answer those questions.

That's probably because they would have interrupted the efficient flow of her agenda, which is to craft a facsimile of a real Southern family story but to make sure that we don't miss the message: Women must stick together, through thick and thin. Women are strong. Southern women in particular, because of their sass and liveliness, can get away with a lot more bad behavior than the rest of us boring old folk, and it's all OK. It all adds up to something heavily calculated to make us feel good. But it's really just a beignet that doesn't sit right.