The birds of Hollywood: An unnatural history

Movie producers spend countless millions to make the details convincing. So why can't they figure out that blue jays are asleep at night and thrushes go south for the winter? 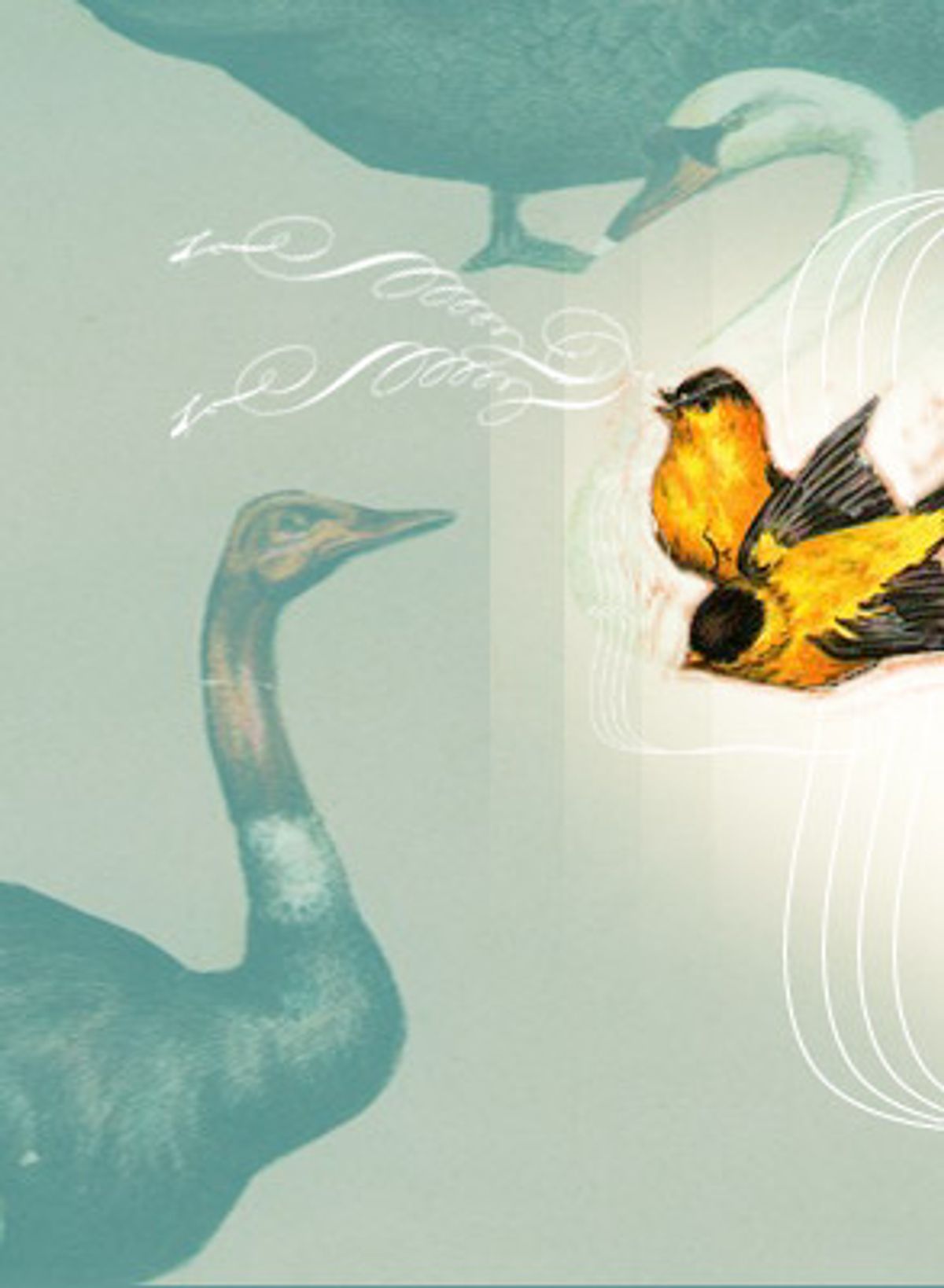 The wizards of Hollywood can duplicate a city street on a studio back lot, create convincing jungle warfare on a soundstage in Culver City, dazzle you with special effects. Technical advisors -- scientists, soldiers, doctors, lawyers, computer gurus -- ensure that what happens on-screen is plausible. And yet, one small but significant aspect of moviemaking is consistently overlooked. Hollywood is tone deaf to the songs of birds.

On movie and television soundtracks, bird songs are often inserted without regard to whether the birds would ordinarily occur in the locale, season and habitat depicted in the film. When a bird sings in the background of the film you are watching, it is liable to be ornithological fantasy.

Although bird songs might be picked up by sound recordists as a movie is shot, they are usually added during the post-production phase to give outdoor scenes "atmosphere." To do the job right, you wouldn't simply cue up "Bird Songs of North America" and record onto the movie's soundtrack whatever songs strike your fancy. You would choose only songs one could expect to hear in that tiny piece of the world shown in the segment of the film you are editing.

Hollywood sound editors usually are not so particular. A movie set in America containing all the right bird songs is as rare as a Kirtland's warbler. No one seems to have told the moviemakers that birds have geographic ranges (Carolina wrens can be found singing in New Jersey but are absent from Southern California); that birds migrate (the yellow warbler pouring out its heart in May departs in fall); and that birds live in certain surroundings (meadowlarks don't vocalize in towering forests).

Hollywood's recklessness in adding bird songs to movie soundtracks is puzzling, considering its obsessive attention to detail in other areas. Special effects teams can spend days shooting complex sequences that look true to life but will last only seconds in the finished film. In period pieces the architecture, furnishings, costumes, props and customs of the day are painstakingly researched. Sets constructed to mirror actual places are so accurate we believe they are real. Is it any wonder that even modest films cost tens of millions of dollars to produce?

For those of us who watch birds and have learned their songs, however, movies can be maddening, no matter how big their budgets. It's hard for us to concentrate on a story when ornithological incongruities assault our ears. Compounding our frustration is that other people usually don't notice. Either they're not conversant with bird language or they fall under the hypnotic spell of drama and screen out any incidental sounds.

Moviegoers would not believe a film that showed the streets of New York lined with palm trees. Misplaced bird songs, the aural equivalent of this, fall into seven main categories:

The award for the biggest geographic gaffe, however -- one that transcended continental boundaries -- could go to the last film adaptation of "Lord of the Flies." Watching this desert-island film, presumably set in the South Pacific, I kept hearing the scream of a red-tailed hawk. The moviemakers were particularly fond of this sound, using it repeatedly to symbolize the isolation and vulnerability of a group of schoolboys, marooned survivors of a plane crash. Yet the red-tailed hawk occurs only in North America and the Caribbean, so either the castaways weren't lost or the bird was.

Day for Night For some moviemakers, there is no distinction between diurnal and nocturnal birds. In their films, a robin may burst into song at midnight; an owl may hoot at high noon. If it seems to suit the mood, they let the whippoorwill call in bright sun, though it raises its voice chiefly to the moon. In "Eyes Wide Shut," it's the dead of night as Tom Cruise walks up to the gates of a Long Island mansion, the scene of an orgiastic costume ball. Inexplicably, a blue jay -- by no means a bird of the night -- calls three times. Defenders of Stanley Kubrick's moviemaking may invoke artistic license, but is this just an excuse for biological illiteracy?

Mall of the Wild The cry of the common loon gets a lot of play in the movies. It is a sound I associate with wilderness -- large, pristine lakes where humans rarely intrude. In the movies, however, you can hear a loon almost anywhere. The determining factor is fog. A suburban scene with close-cut lawns, water sprinklers, sidewalks and kids riding bicycles is not good loon habitat, but add some fog and Hollywood will have loons crying from every direction.

Winter of My Discontent The scene in the television movie is cold and dismal. Snow blankets a dusk-shrouded landscape crossed by picturesque split-rail fences. A man and a woman embrace near the barn. Soon they are serenaded by the celestial, flutelike song of a hermit thrush, which many people believe has the most beautiful voice of all North American birds. The thrush sang on and on, but all I could think was that in 25 years of listening to birds I've never heard a hermit thrush in winter. Where I live, the song of the hermit thrush echoes through deep woods in spring and summer only. So much for willing suspension of disbelief.

The Time Is Out of Joint The cardinal figures prominently in Tim Burton's "Sleepy Hollow." During the opening credits, Johnny Depp, playing "constable" Ichabod Crane, releases a caged cardinal as he prepares for an extended visit to the Hudson Valley. In a romantic scene with Depp in the Sleepy Hollow countryside, Christina Ricci (as Katrina Van Tassel) identifies a wild cardinal by its song. Cardinals were once kept as pets (now an illegal practice), but the ornithological record suggests that a cardinal would not have ordinarily occurred in this film's setting: the New York of 1799.

Historically a Southern species, the cardinal has spread north into New York -- where it is now common -- mainly within the past 60 years, probably aided by the proliferation of backyard bird feeders. Bird ranges change over time, another natural fact that is often lost on Hollywood. Washington Irving's "Legend of Sleepy Hollow," by the way, never mentions the cardinal.

Silent Spring It's a beautiful spring morning on film. The sun rises above the hilltops. Warm light streams over the scene. Flowers are in bloom, trees are leafing out, the meadow is a lush green and the birds are ... mute. The actors populate a world devoid of the wild melodies of seasonal renewal and no one has told the sound editor. It's Rachel Carson's nightmare come true.

Birding Hot Spots of Hollywood The converse of the silent-spring technique: In some movies, sound editors go wild over bird songs. To every outdoor scene they attach a litany of singing birds and you never hear the same one twice. In recording the soundtrack, they seem to have turned on the bird-song tape and left the room. If such a place really existed, birdwatchers across America would flock to it. The actors, of course, never notice anything unusual as one bird species after another visits their idyllic hamlet, reciting its sweet strain.

Recently I saw a movie that used the birding-hot-spot style of sound recording to heighten suspense in a night scene. In quick succession I heard several species of owls, chuck-will's-widow, whippoorwill and the omnipresent common loon. Not only did every nocturnal bird of North America happen to occur in this movie location, each species sang on cue without stepping on another bird's lines.

Watching a movie with a few family members, I couldn't help pointing out another bird-song error. "Hear that blue jay? Totally wrong. That bird isn't found where this film is set!"

They shushed me with polite smiles and blank stares, only making the movie that much more unbearable. Had I been alone, I could have muted the annoying sound and read the closed captioning. Instead I brooded silently through the rest of the film, dreaming of the day when Hollywood adds "bird-song specialist" to its roster of technical advisors.

Robert Winkler, a Connecticut nature writer, is working on a book about his adventures with birds in the "suburban wilderness."