Who wants to marry a regular person?

In Michael Apted's sad, hopeful and deeply moving new documentary series on marriage in America," "I do" isn't a happy ending -- but rather an uncertain beginning. 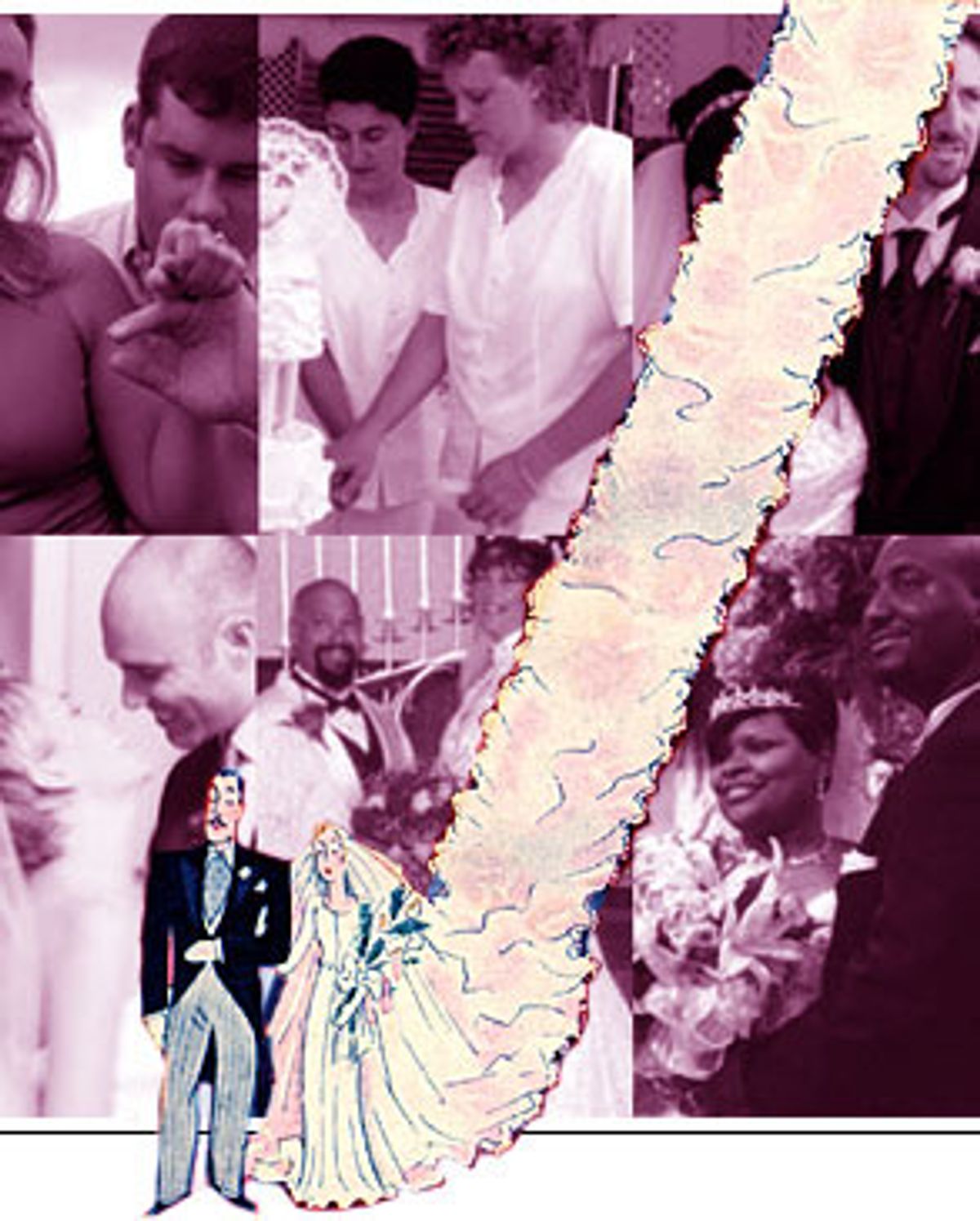 Weddings have become routine prime-time entertainment lately, like sitcoms or shows about people who voluntarily get into cages with rats. Morning news shows host win-a-wedding spectaculars, in which couples are fêted with all-expenses-paid ceremonies in exchange for letting audiences vote on the bride's hairdo. Networks devise win-a-spouse shows like Fox's "Looking for Love: Bachelorettes in Alaska" and ABC's "The Bachelor," both of which have sequels in the works.

Meanwhile, the current administration proposes spending $300 million on promoting marriage among the poor (perhaps we have "Who Wants to Marry a Welfare Recipient So She'll Get to Keep Her Benefits?" to look forward to), despite statistical evidence that some 92 percent of Americans already get married at least once in their lives. Even as the multibillion-dollar marriage industry continues to balloon, showing no apparent signs of slowdown despite an economic downturn, the divorce rate still hovers at around 50 percent.

Given all that, English director Michael Apted's new series, "Married in America," which premieres on A&E on Monday, June 17, might at first mention seem not so fresh. In fact, however, the series might serve as a useful reminder that a wedding is not a game-show prize. When "Who Wants to Marry a Multi-Millionaire?" reared its head in 2000, it was still possible to gape and squeal and even think of something original to say about the spectacle of a 34-year-old emergency room nurse in the last bloom of a reasonable facsimile of youth agreeing to marry a creepy, lantern-jawed stranger on national TV mere moments after setting eyes upon him for the first time. Just two years later, such a spectacle retains about as much power to shock as an early Lumière brothers film of a train arriving at a station. The only surprising thing about watching five little Miss Havishams in full bridal drag trek up the side of a frozen mountain in the opening shots of "Bachelorettes in Alaska" is its lack of power to elicit any emotion stronger than mild schadenfreude.

Weddings, it seems, have become such potent signifiers that Americans are loath to miss out on them. It's that one special day when you get to show everybody that somebody loves you enough to make a really big, obscenely expensive, highly ritualized and perhaps even nationally broadcast deal out of it. Mercifully, there is no resemblance between Apted's series and the spate of bridesploitation shows that have lately been trotted out on the small screen, save that the "ultimate goal" of such shows is essentially Apted's point of departure.

In a phone interview, Apted balks at the comparison: "To put them in the same breath is horrifying," he says. He has a point -- but then, we have a trend.

Apted's first longitudinal documentary since his famed "Seven Up" series -- launched in 1964 when he interviewed a group of 7-year-old British schoolchildren and then checked up on them every seven years thereafter -- "Married in America" takes us inside the lives of nine very different couples as they enter into marriage. The couples, all of whom live in or near New York, Los Angeles or Birmingham, Ala., hail from varying ethnic, religious and socioeconomic backgrounds.

Some are interfaith unions, some are interracial, and one couple is lesbian. There are second marriages, age differences, income discrepancies, and children from other unions. Nearly all the couples have at least one set of divorced parents, and a surprising number of fathers are estranged from their grown-up kids. One twice-divorced, twice-imprisoned groom could be speaking for all the couples when he says of his own relationship, "We each brought a lot of baggage to the relationship. So we put the bags on the table and rifled through them."

Asked why he chose marriage as the subject of his second long-term documentary project, Apted says, "I've always had a gossipy interest in how people meet, fall in love, get married, and then what happens and all that. And I think, on a more political level, as a visitor to this country, I was interested in the way politicians put the ideas of family values out. And yet I was seeing all these statistics about divorce and single parents. So I wondered: What was the real story here?"

As it turns out, the real story in "Married in America" is often moving, sometimes sad and occasionally hilarious. What makes a couple decide to get married? And what challenges do they face going in? Is it possible to predict the outcome of a marriage based on what each individual brings to the union or on what obstacles they have overcome, together or alone, in the past? The first film in Apted's series focuses on the days and weeks leading up to the weddings, celebrations as diverse as the couples themselves. The couples speak candidly about how they met, how they fell in love, how they decided to get married, and what hopes and dreams they have for the future.

"I wanted to find couples who would allow me to cover as many bases as possible," says Apted. "I had the obvious bases of ethnicity, religion and second marriages, and the less obvious ones of whirlwind romances, childhood sweethearts, economically challenged marriages, ones with children already in the relationship."

Some of the couples are remarkable. The childhood sweethearts, for example, -- a black-white interracial couple -- first met when they were 4 and 5 years old and remained close until they decided to get married in their mid-20s, despite initial opposition from the groom's Haitian mother. Another interracial couple, in which the Filipina bride is a Christian and the groom is Jewish, also faced resistance from his family. Though both mothers have made peace with their sons' choices by the time the weddings take place, one of the couples seems to have weathered its problems well and grown stronger in the process, while the other union is already showing cracks.

In some cases, such as the marriage in which the husband has served a prison term for rape, it's hard not to think that the odds are stacked against them. But some of the couples who might look the worst on paper come across as the strongest. It's impossible to tell how a couple will react to a challenge, Apted says: "If a same-sex couple has more pressure going in, they may have to think it through more." In any case, he refrains from making predictions. "I wouldn't dream of telling you if I had [any]," he says. "That's the lottery side of the project. Everyone who sees the film will say, 'Well, they won't make it.' Or, 'They'll do well.' That's the fun of it."

"Married in America" shares the same sense of exuberance that made "Seven Up" memorable. But if you've seen "42 Up," Apted's most recent installment, in which we find out how far adult reality can stray from childhood dreams, the optimistic spirit of "Married in America" seems even more poignant. For this series, Apted and his crew will visit the couples every two years, whether or not they remain together, to document how their individual marriages have evolved and to explore how the institution of marriage has changed.

Future films will include footage from earlier ones, and the participants' expectations will be measured against their present realities. According to statistics, some of these marriages won't even survive the first cycle -- and some of these couples will surely regret having signed on to Apted's project in the first place.

Anyone who has ever been frustrated with the "happily ever after" denouement of love stories, and who has really just wanted to know what happens next, should find ample satisfaction in "Married in America." Apted has a knack for spotting the high points in life and letting people's stories roll easily and gently downhill from there. In fact, having seen how some of those little kids from "Seven Up" turned out, you might regret tuning in to "Married in America" in the first place. Who knows how many tissues will be sacrificed at its altar? If you can't handle it, I suggest you get out now. Watching "Married in America" isn't just some fling. It's a serious commitment.