The Bush administration rivals the Nixon White House when it comes to secrecy and unchecked power, with John Ashcroft as our modern-day John Mitchell. 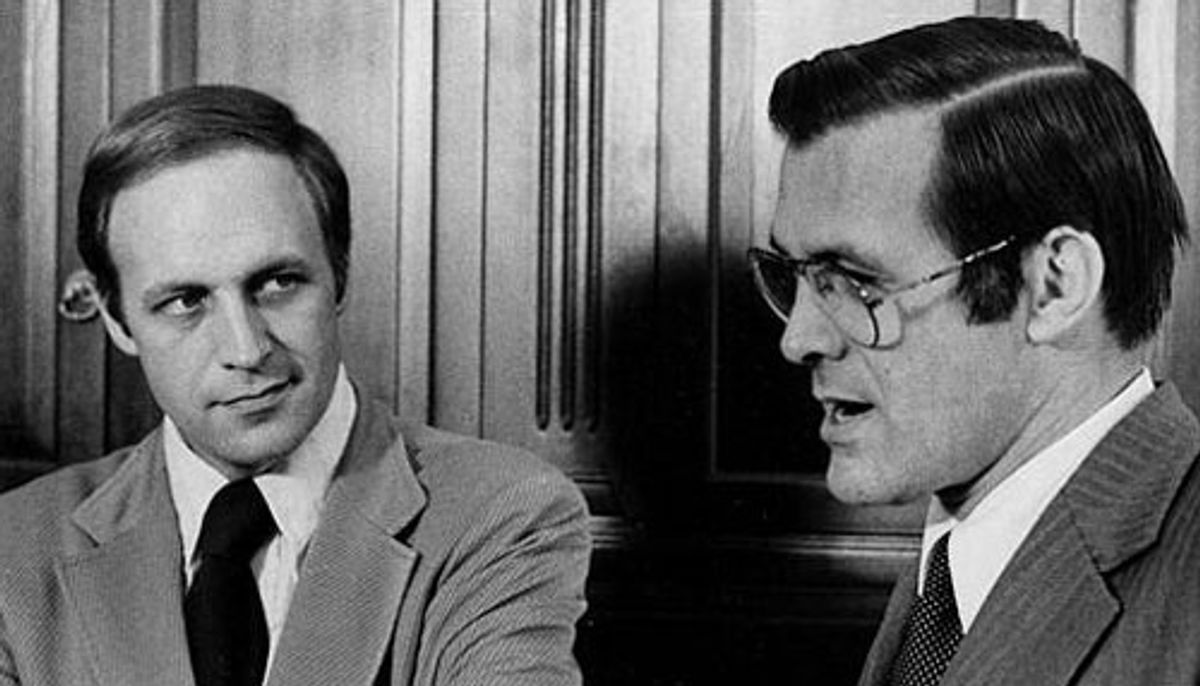 They are not exactly young, these two men in the photograph, but they are trying for rakish in a '70s way -- modified Elvis sideburns, hair falling below the ear -- pushing outward the boundaries of hipness in a Republican White House.

Recently I found myself contemplating this photo, taken shortly after the Watergate scandal forced President Nixon from office. The two would-be hipsters -- Donald Rumsfeld and Dick Cheney -- were aides to the new president, Gerald Ford. At that time Rumsfeld and Cheney were persuading Ford to veto one of the most important Watergate-inspired reforms, an enhanced Freedom of Information Act, designed to guarantee public and media scrutiny of the FBI and other agencies. FOIA, the two aides warned, would take too much power from the executive branch. Ford indeed vetoed the bill, but Congress overrode the veto and the FOIA became the law of the land -- at least until last October, when Attorney General John Ashcroft fulfilled Cheney and Rumsfeld's three-decade-old wish by pledging to fight any FOIA request that comes over the transom.

With the political aftershocks of Sept. 11 only now beginning to be felt in Washington, it's especially important to recall the real lessons of Watergate. Thirty years on, it is easy to forget that "Watergate" was really misleading shorthand: It was shorthand not only for the 1972 break-in at Democratic National Committee headquarters and Nixon's subsequent coverup of campaign shenanigans, but also for a vast array of domestic spying and other executive-branch abuses, which the Nixon crew perfected but did not invent.

It is fashionable now to blame Watergate on Nixon's paranoia and rogue personality. But the crimes of Watergate grew directly from the kind of unchecked presidential powers now sought by the Bush administration both at home and abroad. FBI spying on political rallies and religious communities? The White House plumbers practiced their tradecraft breaking into the psychiatric records of dissident Defense Department analyst Daniel Ellsberg. The "enemies list" grew from FBI director J. Edgar Hoover's decades of spying on religious, civil rights and peace groups.

Expanded paramilitary covert operations abroad? The Watergate break-in team was conscripted from the CIA squad for covert Cuban operations. Restrictions on the flow of information to Congress and the public? The direct complicity of Nixon and other high officials in Watergate was proved only because senators who had subpoenaed White House records refused to knuckle under to claims of executive privilege -- a drama being replayed this month with Sen. Joseph Lieberman's subpoenas regarding the involvement of Cheney and other White House officials in Enron.

One particular lesson of Watergate deserves close attention these days, and that's the lesson we learned about the power of the attorney general. Actually, we learned two contrasting lessons.

Start with Nixon attorney general John Mitchell. From the moment of Nixon's inauguration Mitchell was obsessed with partisan secrecy, with a crabbed and narrow vision of law enforcement, and with the intimidation of critics. His Justice Department fought the New York Times' publication of the Pentagon Papers, the internal secret history of the war in Vietnam; concocted fraudulent charges to jail antiwar dissidents like Jesuits Daniel and Phillip Berrigan, absurdly accused of plotting to kidnap Henry Kissinger; wiretapped aides suspected of disloyalty; launched a doomed war on drugs; and tried to pack the Supreme Court with conservative ideologues. Up to his eyeballs in Watergate sewage, Mitchell claimed it was all in the interests of law and order, and to the bitter end of his tenure used his office to intimidate opponents and keep information from Congress.

The lesson: Without the active collaboration of an attorney general, Watergate would never have happened. Mitchell gave law-and-order cover to a lawless administration.

Lesson No. 2 comes from another Republican, President Ford's attorney general, Edward Levi. No left-winger, Levi saw his job as restoring public confidence to a Justice Department tainted by Watergate and related scandals. To Levi fell the delicate job of reforming the FBI. What he produced were guidelines that did not prohibit the bureau from collecting information -- but did require suspicion of wrongdoing beforehand, and a paper trail to prove it.

Ashcroft, too, runs a Justice Department and an FBI in desperate need of restoring public confidence. Today's "What did Bush know?" scandal comes on top of Wen Ho Lee, Robert Hanssen, and other embarrassing cases. Ashcroft could have learned a lot from Levi's transparent and nonpartisan approach to reform.

Instead, Ashcroft has played to fear. Earlier this month, when he tossed Levi's domestic-spying guidelines into the compost, Ashcroft misleadingly told the public that FBI agents had been prevented from surfing the Internet, monitoring public rallies and attending religious services. Nonsense.

Under the Levi guidelines, any of those investigation and surveillance activities were possible and, indeed, common -- so long as agents had at least a slim pretext for engaging in them. Just last week I was on a panel with Laurie Levenson, a former assistant U.S. attorney in Los Angeles, who recalled accompanying FBI agents to photograph political rallies in the not-so-distant past, fully authorized by the Levi guidelines. Besides, the question has never been just whether the FBI can attend public events, but what agents can do with the information they collect. My own filing cabinets are filled to overflowing with papers released under the FOIA that document the bureau's old pre-Levi practices, like monitoring the speeches of dissenters, disrupting protest groups, and otherwise intruding on the most basic rights in ways that had nothing to do with public safety. Ashcroft's new guidelines could easily return the FBI to those lawless days -- a prospect, by the way, that many of today's generation of agents do not look forward to.

Ashcroft's religious piety may disguise his resemblance to the famously profane Mitchell. But beneath the surface this attorney general is all Mitchell: fighting congressional requests for information on whopping FBI scandals like the conviction of Boston FBI agents for conspiring with mobsters; accusing critics like Sen. Patrick Leahy, D-Vt., of endangering the United States; promoting a White House obsession with secrecy unmatched since, well, Richard Nixon.

Finally, it is crucial to remember how deeply Watergate was rooted in the Nixon administration's determination to interfere unilaterally and often secretly in the affairs of countries around the world. The administration's profound addiction to domestic spying really took flight with the secret bombing of neutral Cambodia and the protests that erupted when that horrific campaign became public knowledge. Awful as the crimes of Watergate were, they were a pale domestic reflection of how an unrestrained presidency exercised power in Southeast Asia, Chile and elsewhere -- parts of the world that are still recovering. Then as now, there was a continuity, all too easily overlooked, from an administration's claims of executive privilege at home to unilateral action abroad.

It is really only in the light of Watergate that the Bush administration's actions since Sept. 11 make sense. Just as the Reagan administration saw its job as undoing New Deal-descended corporate regulation, so has Bush & Co. systematically exploited the terror attacks to undo Watergate-era reforms reining in the executive branch. Each day's tit-for-tat, blame-the-other-guy leaks from the FBI and CIA make it more and more clear that prior to Sept. 11 neither agency suffered from an inability to spy, wiretap or otherwise collect information. Instead, the administration has shrewdly manipulated public opinion to accomplish something sought by Watergate-era Republicans like Cheney and Rumsfeld ever since: a restoration of the imperial presidency.