John Dean, on a decades-long quest to identify history's most elusive news source, brings new evidence to the fore in his new book. 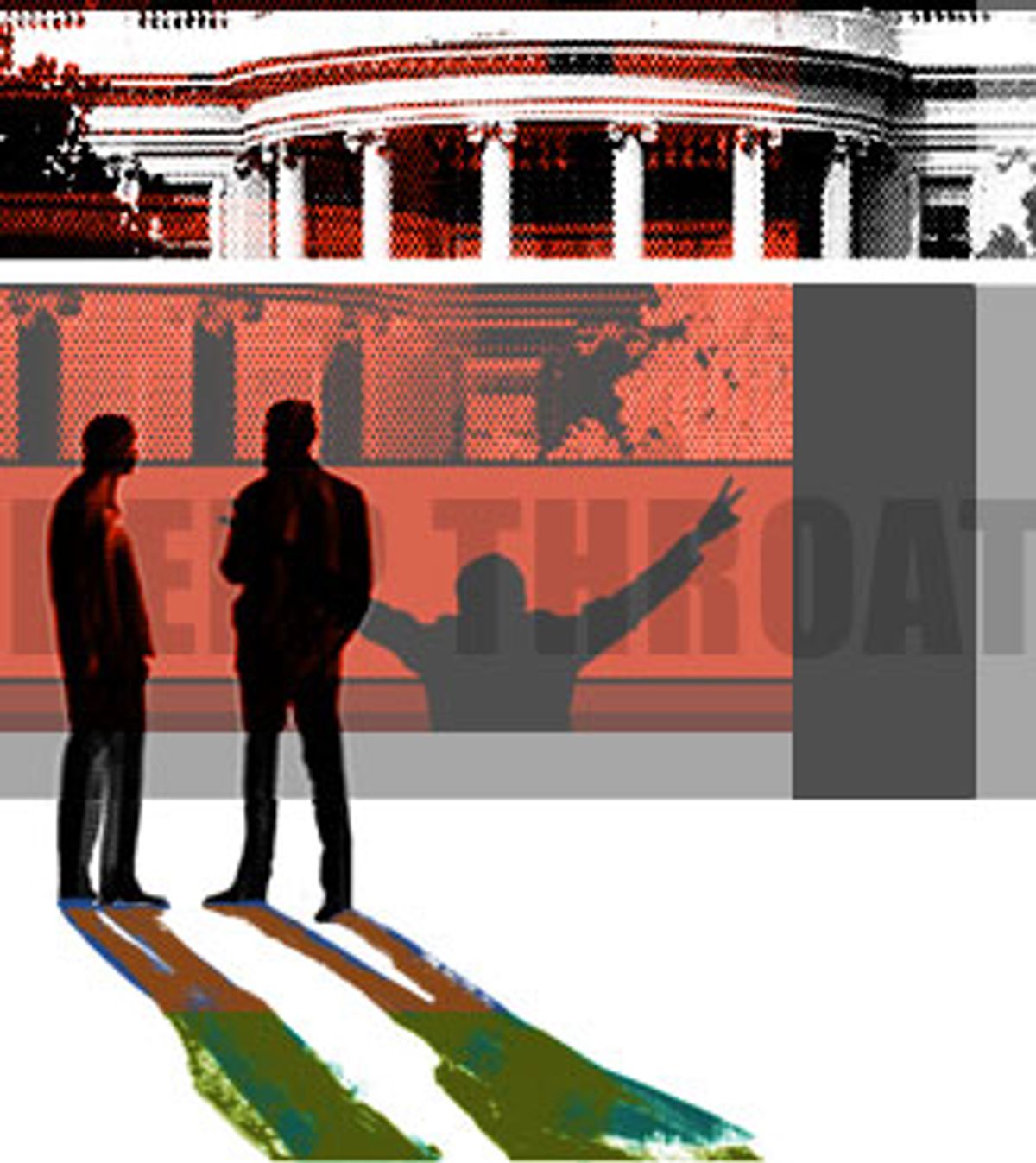 The book offers the most comprehensive look yet into the identity of Bob Woodward and Carl Bernstein's famous anonymous source in the Nixon administration, who came to be known as Deep Throat. Dean -- the White House counsel whose testimony broke the Watergate scandal open in the spring of 1973, and author of "Blind Ambition," "Lost Honor" and "The Rehnquist Choice" -- combines new evidence from historical archives with his own recollections to provide a definitive profile of Deep Throat. He also tells the story of how he built what seemed like a solid case pointing to one of his former White House colleagues -- only to have to rule out that possibility in the end. Finally, he offers a "short list" of the few names left in the running for Deep Throat -- "the one person," he writes, "who will go into history outranking me on Richard Nixon's final enemies list."

Salon talked with Dean about his quest to identify Deep Throat, the ethics of leaking to the press and why he chose to publish his work as an e-book. (Editor's Note: For technical reasons this work is no longer available in electronic format. It is available in paperback format here.)

How long have you been searching for Deep Throat?

Throat first surfaced in 1974 when Woodward and Bernstein published "All the President's Men." When I first read the book, I thought that Woodward's friend and source was probably a composite. Some information appeared to come from the White House, some from the FBI, some from the Committee to Re-elect the President, known as CREEP or CRP. But I really didn't start seriously searching until around 1978.

When did you decide Throat was not a composite, and why?

Actually, it was Bob Woodward who persuaded me. I happened to state publicly in a speech, not long after his book came out, that I thought Throat was a composite, and that was picked up by the Washington Post. I had first met and had dinner with Bob not long before the speech, and when he sent me a message assuring me it was not a composite, I believed him.

So you take Woodward at his word about all this?

Absolutely. Over the past 30 years I've gotten to know Bob, and everything I know about him reeks of honesty and sincerity. I don't think he has ever lost his Midwestern values, and I can't imagine him playing games. He has staked his professional reputation on his reporting, and while other journalists carp, and complain about his use of unidentified sources, I believe he reports as accurately and candidly as humanly possible.

In your new book, "Unmasking Deep Throat," you write that you have relied on Woodward's honesty in figuring out who might be Deep Throat. Did you find anything in your research that might change your mind?

To the contrary. I was able to locate a copy of the unedited manuscript of "All The President's Men," which runs about 900 pages. It is probably twice as long as the published book ended up. Not only did I find clues about Deep Throat that for one reason or another did not make it into the book, I found many examples of both Woodward's and Carl Bernstein's candor -- like explaining who had undertaken various activities, and how it took time to develop what has now become their lifelong friendship. For anyone to not accept Woodward's information about Throat, in the manuscript, in the book and in his statements over the past two and half decades, would make searching for him futile. If Woodward has not been honest, it would make Deep Throat a hoax. I don't believe that is the case, and few have peeled apart his work like I have.

Is it important to know Deep Throat's identity? Isn't looking for him a little like being one of Richard Nixon's infamous Plumbers, the guys who hunted for leaks?

Fair question. Some of my former colleagues, like Leonard Garment, believe that Deep Throat has had a profound impact on American politics. Other knowledgeable people, like former Washington Post editor Barry Sussman, who had editorial supervision over most of Woodward's and Bernstein's Watergate reporting, feel that Deep Throat's information was so insubstantial that he added little to the Post's Watergate coverage. Both are correct. Deep Throat is important because he gave the managing editor of the Post, Ben Bradlee, the confidence to keep publishing one story after another about campaign improprieties that high officials at the White House and CRP kept denying. Throat also changed journalism -- he gave the unidentified source credibility.

But Deep Throat sleuthing, as I have been doing for many years, and report in the book, is nothing like the Plumbers' activities, which were undertaken fair or foul, and using wiretapping and break-ins to obtain information. While I find hunting for Throat entertaining, he obviously doesn't feel that way. For that reason, I've sought to be as fair as possible.

You say Throat changed journalism, giving credibility to unidentified sources -- what do you mean by that?

Is that good or bad?

It can be good, for at times it's the only way for a reporter to get information. My book shows this is risky, however. While I have no interest in discrediting Deep Throat, or "All the President's Men," in analyzing all of the conversations between Woodward and Throat -- some 14 conversations from June 19, 1972, to the first week of November, 1973 -- I note in passing the incredible amount of bad information that Deep Throat gave Woodward. Information that is dead wrong. Yet many people still read "All the President's Men," or watch the movie, and believe everything Throat says is gospel. Not so. This is another reason to surface Throat, to put things in context.

You mention the film "All the President's Men." Did you rely on it to figure out who Deep Throat might be?

I watched the movie again, while doing my research. It holds up remarkably well. But the movie is not history. It's a portrait of history, not a photograph. I wrote a piece for Salon some months ago about the film "13 Days," which depicts President Kennedy's handling of the Cuban missile crisis. These movies are docudramas. They compress reality, but are not reality. They are written, acted and directed to give the audience a good story, one that will hold his or her interest. The short answer, as I explain at some length in "Unmasking Deep Throat," is that I didn't rely on it. I explain a few of the flaws from a historical point of view. But it's great theater.

Why did you publish this as an e-book?

I knew anything could happen when I set a deadline of June 17, 2002, to announce the identity of Deep Throat -- and much has happened. In fact, it's been about as thrilling as book publishing can get, maybe more thrilling than it should be. I had developed a profile of Deep Throat, based on Woodward's and Bernstein's clues in "All the President's Men," and their unedited manuscript. Remarkably, all the clues pointed at one of my former colleagues, whom I had earlier considered only a remote possibility. But there he was, right in the middle of my Throat-searching radar. I spent months trying to figure out how I could be wrong. Then I tested the material on a couple of attorney friends who are very familiar with Watergate. They found the case overwhelming that I was right. I then tested the material on a few news organizations. They, too, felt I was correct. To make a story I tell in the book very short, I turned out to be wrong. But the exercise was important in removing from consideration a former colleague who is not Throat, notwithstanding the strong circumstantial evidence to the contrary.

Because no one wants to claim the Deep Throat identity, I knew it would be difficult. Had I not decided to publish the results of all these years of Deep Throat sleuthing as an e-book, I would never have been able to do it, given the type of problems encountered in such an investigation.

Why doesn't Deep Throat want to identify himself?

Woodward and Bernstein never did figure out his motive. Nor can I. Woodward once said, years after Watergate, that Throat did not want the hassle of being known as a whistleblower. I look at that subject, and whether he has a right to anonymity, in the book. There are a lot of misimpressions about the fate of whistleblowers, and I get into that. I know that subject fairly well, because I blew the whistle long and hard on Watergate.

So you don't think it's wrong to leak?

Obviously, it depends on the circumstances. I think the new genre of fiction and nonfiction revenge books is appalling. Books like "The Nanny Diaries," and nonfiction books where employees attack their superiors, particularly when they are high-profile people. That's leaking at its crudest -- leak for profit. At the other end of the spectrum, government couldn't operate without leaks. Often leaks are test balloons to determine public reaction toward policies. Others times leaks are used to undercut a policy that a large segment of the public might not want.

How about Deep Throat's leaking?

I think he was very courageous -- a real "Profiles in Courage" character. He was one of the few people involved in Watergate who actually followed the code of conduct for government employees. It was adopted by Congress in 1958, and remains in full force and effect to this day. A federal employee owes his loyalty not to a president, a political party or a government entity like the White House, but rather to the American people for whom he or she works. And the code of ethics calls on all officers and employees to report corruption in government when and where they find it. It doesn't say how to report it, and Deep Throat did it his own way.

Are you disappointed that you have not named one person as Deep Throat, but instead identified a very small group who could be Throat?

Not in the slightest. I believe I've been able to advance the information about Deep Throat further than it has ever been. It would be very simple for me to toss out one of the names in this very small group, which I have located based on evidence that has not been previously available. The reason that Bob Woodward is refusing to further comment about Throat, by confirming any further denials, is that he knows how small the field has become. I have placed Deep Throat, I believe irrefutably, in the Nixon White House, and I have shown the very few people privy to the information that Throat gave Woodward when he did so. I've also laid out all the clues so others can participate in completing this process. And I hope they will join me. It's fascinating, once you start the chase.