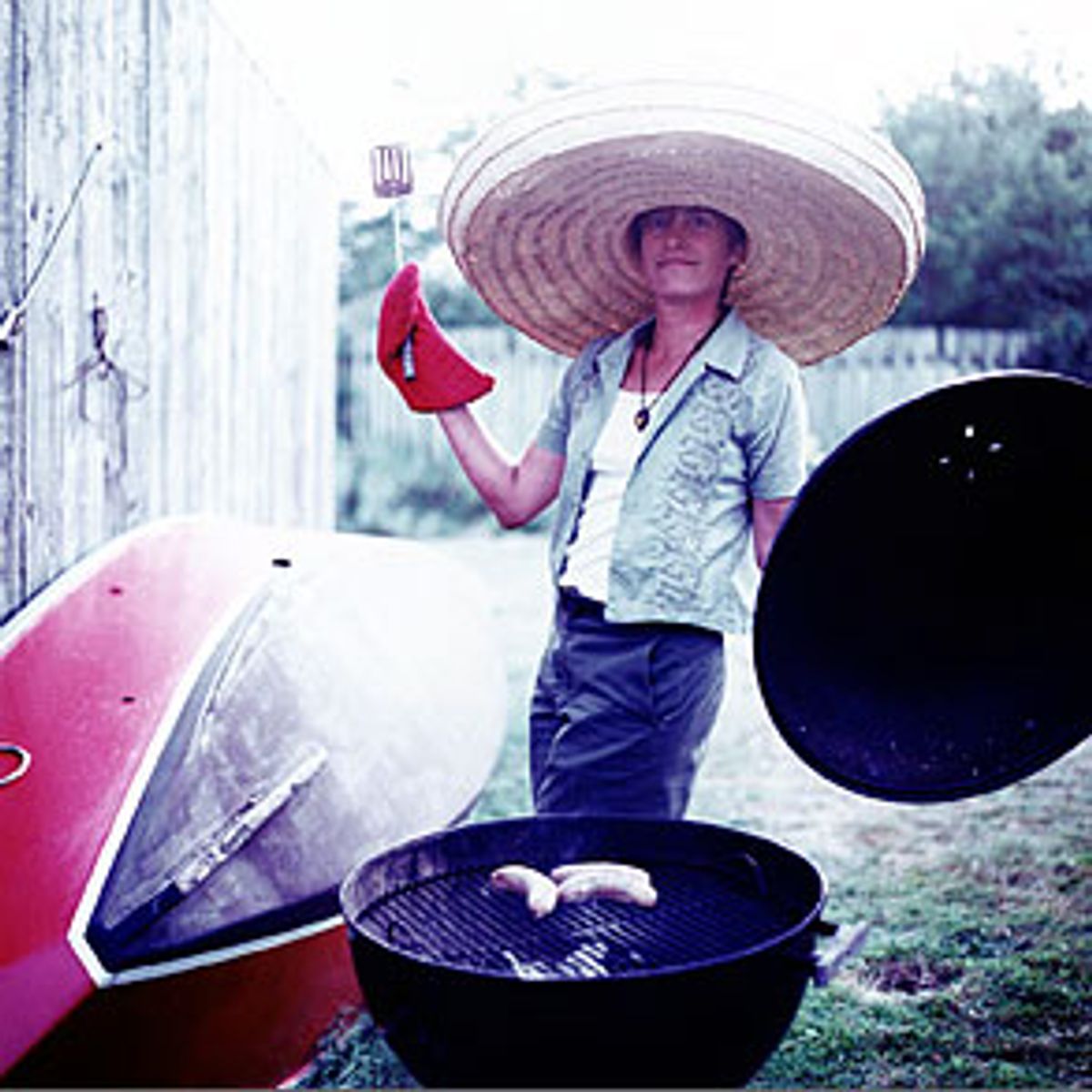 Signs that the end is near are so common that Weber can publish its "Girls' Guide to Grilling" without anyone pausing to weep, or moan, or expedite construction on the backyard bunker, which could coincidentally go in right beside the Weber Genesis Silver gas grill, which is now "handsome, with a nice build."

"For the first time, less than half of the Weber Grill-Line callers reported men to be the primary griller in their household," Weber tells us in its latest marketing materials. (Weber is referring, incidentally, to the Weber Grill-Line, 1-800-Grill-Out -- "the nation's only toll-free outdoor cooking hotline" -- celebrating its 10th anniversary.) Anyway, the numbers are in, and the largest-selling single brand of grills in the world has recruited "Betty, Marsha, Christina, Theresa, Edna, Jeanine, Ginger, Brooke and the other Girls of Weber" to reel in the newest demographic.

"Weber's Girls' Guide to Grilling," a slim volume of barbecue basics, safety guidelines and actual recipes, is a puny, insouciant, snarky, breezy, down-to-earth little primer of a P.R. mailing. "How About a Little Grill Talk" is one section. Also "Flirting With Flank Stank" and "Practicing Safe Sizzle." More cleverness has never gone into a booklet about barbecuing -- if Lorrie Moore wrote about outdoor cooking, this would be her 40-page opus. Likewise, if opuses could make human choices, this one would choose "Ally McBeal" and then some "Bridget Jones" before bed.

Weber's bid to get women enjoys a thoroughly female-oriented aesthetic. The ad copy no longer sounds like men imitating women, but rather women imitating women. On some pages this copy is accompanied by festive paintings of grills, dancing lime slices, or peaceful plates of summer meat cooling happily beside a healthy glass of red wine. On other pages, flowers! The flowers -- Monet-style petals in pink and yellow oils -- announce whimsy and BBQ flair. If grilling was once the province of dull, hulking men, well, the men had better make room for big peonies.

Do the minor calculus (there's probably a girls' guide to it out there), and you can get a good idea who the intended audience is. The Girls' Guide girl, it would seem, is the famous middle-class, middlebrow, vaguely liberal female who, by most accounts, is taking over the world. Weber has her number: She's the urban soccer mom whose college roommate read de Beauvoir, her husband burned one too many wieners last August, and her summer evenings need something between pro-choice rallies and crafting. Her politics are those of sincere logic (Girlfriend, we can grill as good as the next guy) and moderation (Girlfriend, let's not stop shaving our legs or anything).

Money aside, why does the Girls of Weber campaign matter? The mattering is in the borrowing. Like Britney Spears fans wearing "Grrrl Power" shirts, the Weber campaign borrows feminism's vocabulary but doesn't really feel like feminism. It doesn't feel particularly un-feminist (although one could argue that apolitical is as unfeminist as you can get), but more like a creepy simulacrum that's too harmless to be alarming.

The fear is not that Weber grills will directly undo women's suffrage and inaugurate a new age of required burqas in America. The fear is that soon the spirit of taking back the ____ will belong to the realm of commerce, not revolution. We all know the appropriation concern by now (remember when everyone started wearing Che Guevara T-shirts a few years ago? What does Che Guevara mean now?), but that concern seems to get only more relevant these days.

I don't know. Feminism is one of those movements that get obsessively protected, like a sickly child. Does it make sense to object when the language of feminism is co-opted to sell grills, but to scarcely blink when the posture of, say, masculinity is co-opted to sell trucks? Presumably our nation's beefcakes don't bitterly smash beer cans on their heads every time corporate America swipes a little of their identity. Maybe an ideology fragile enough to be unraveled by a marketing department needs some restructuring anyway.

Harmless or not, girls' guide-ism appears to be spreading at Weber -- even its putatively non-gendered publications are now sprinkled with playful, girlish cleverness. The 13th annual Weber GrillWatch Survey, an undeniably beautiful GrillWatch survey, handles the merchandising of outdoor cooking devices like the orchid handles spring. In folksy black-and-white photos, around tastefully blurred picnic tables, the troubles of Americans fall to the grass with the ketchup and pork drippings. Life is good in this booklet; this booklet is the feel-good promotional device of the summer. And in case we missed the larger, decidedly female point, the back-page meditation spells it out: "Grilling is unifying."

I like grilling. I'm not sure it's unifying or that anything, really, is unifying, but I like it. I'm receptive to pictures of it. I think it's fun when everyone's putting corn in the fire, and then fishing it out later and finding a place to sit. I can't think of any substantive ideological objections to participating in this strangely enormous industry.

It's just that we're at a funny moment. Corporate America's continued excursions into our emotional vernacular get deeper and deeper. Between the sass and the unification, grilling seems to have acquired a dimension I never before associated with outdoor cookery. The dimension isn't a bad one -- as the ad execs know we know, there's nothing wrong with either playfulness or togetherness -- it's just strange to see all our light, airy things take on the heft of good marketing. First our long-distance commercials got heavy, and now this; how long until food processors are sold via full-length literary fiction?

"Do the Girls of Weber really exist?" I asked.

"Yes, they do," said Dorothy Jones, the very nice woman on the other end.

"How do they get to be Girls of Weber?"

"A degree in home economics -- some have advanced degrees in nutrition -- and good experience with grilling," she said.

That was that. And since I had her on the line, I asked about the problem steak I cooked last summer, which curled up at the sides like a fallen leaf. "Was it thin?" she asked. "Yes, and cheap," I said. "You probably had a border of fat along the sides," she said. "Trim off that fat edge or get a thicker steak next time."